Hundreds of the Austrian-originated Diamond DA42 twins have been produced since service introduction in 2004.

Authored By: Staff Writer | Last Edited: 03/06/2022 | Content ©www.MilitaryFactory.com | The following text is exclusive to this site. 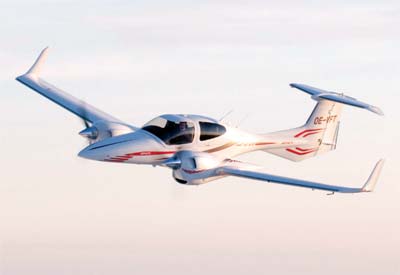 The DA42 "Twin Star" is a lightweight, twin-engined utility-minded VIP passenger hauler and flight trainer aircraft designed, developed and produced by Diamond Aircraft Industries of Austria. A first-flight in prototype form was recorded on December 9th, 2002 and the design entered formal service operations during 2004. It remains in production (since 2002) with over 600 units completed. The DA42 became the company's first entry into the multi-engine aircraft market and succeeded the single-engined DA40 model of 1997. European certification followed in April of 2004 and U.S. certification was granted in 2005.

The aircraft utilizes a robust, easy-to-maintain carbon composite airframe as well as sleek aerodynamics throughout for both a weight-savings measure and to promote air flow efficiency - resulting in higher performance for a product of this class. The nose section is flat and wide and the overall fuselage shaping incorporates noticeable tapering aft of the cabin section. The tail unit showcases extensions from the vertical rudder at both its ventral and dorsal lines offering greater surface area without much added drag. The tail unit is capped by split horizontal planes in a proven Multhopp T-style arrangement. The wing mainplanes are set low against the sides of the fuselage and have upturned "winglets" at their tips (another fuel efficiency measure). Each engine nacelle is tightly cowled, streamlined, and integrated into the lines of each wing mainplane. A typical tricycle wheeled undercarriage is utilized for ground-running (nose leg and two main legs, all retractable).

The cockpit takes a panoramic approach when providing the pilot and occupants with the best possible vision. Window spaces are large and elegantly curved for maximum viewing over the nose and wings of the airframe. Entry-exit into the aircraft is accomplished by a forward-hinged swinging canopy door and upward-opening large rear access panels. The cabin contains folding seats and luggage storage. There is additional storage to be found at the nose section as well. Cabin finishes can be customized to suit the customer and his/her clientele. The cockpit carries a Garmin G1000 series avionics fit with 3-axis GFC7000 Automated Flight Control System. There is seating for four (2x2) including the pilot (three passengers can be carried). In many respects, the DA42 is a "luxury car for the sky".

Initial models were powered by Thielert TAE 125-01 "Centurion" diesel-fueled engines but financial issues with the engine-maker forced Diamond to select the Austro AR300 line for 2009 (DA42 production was actually suspended back in July 2008 because of the Thielert issue). As such, power to newer models is from 2 x Austro AE300 turbocharged jet-fueled piston engines driving three-bladed MT hydraulic constant speed, low noise propeller units in conventional puller fashion. A single throttle control lever operates power to both engine fits for added operator simplicity. Each unit is also digitally controlled with single-switch feathering as needed (FADEC arrangement). Fuel capacity reaches 79.4 USG. Performance specs include a maximum speed of 221 miles per hour, a range out to 1,052 miles, and a service ceiling up to 18,000 feet. Rate-of-climb is reported at 1,280 feet-per-minute.
Advertisements

Optional components and systems for the DA42 include an electric air conditioner, ice protection system, and double bubble canopy. The cockpit can be expanded through various additions all its own including the Avidyne TAS 605 traffic advisory system, the Garmin GDL69A satlink-XM weather and radio fit, and the Garmin Synthetic Vision Technology (SVT) Unit.

While the DA42 series has found its way into many flight training schools and special service divisions, it has also found favor with a select few military operators worldwide. This includes the Argentine Army, the Ghana Air Force, the Jamaican Defence Force, the Niger Air Force, Russian Federal Security Services, the Swiss military, the Royal Thai Air Force, the Turkmen Air Force, Ukrainian Border Guard Services, the British Royal Air Force, and the Venezuelan Air Force as of this writing (2018).

There are few variants in the DA42 line beyond the original DA42. The DA42M is marked as a "special mission" platform while the DA42NG fits the AE 300 series engine of 170 horsepower (each unit). The DA42 L360 flies with Lycoming IO-360 engines of 180 horsepower each and these are fueled by 100LL fuel instead of the typical Jet-A1. The DA42MPP is a multi-purpose design outfitted with surveillance and mapping equipment for the special services and military sectors. The DA42 MPP "Centaur OPA" is the DA42 modified by Aurora Flight Sciences to operate either manned or unmanned. The DA-42-VI is an improved form of the DA42 and brought online in March of 2012. Much care has been taken to streamline the original offering to help increase cruising speeds and performance.

The Aeronautics Defense "Dominator" is an offshoot of the DA42 and is a modified military and special services Unmanned Aircraft System (UAS) platform developed by Israeli industry. This entry is detailed elsewhere on this site.
Advertisements

(Showcased performance specifications pertain to the base Diamond DA42 Twin Star production variant. Compare this aircraft entry against any other in our database or View aircraft by powerplant type)
None. 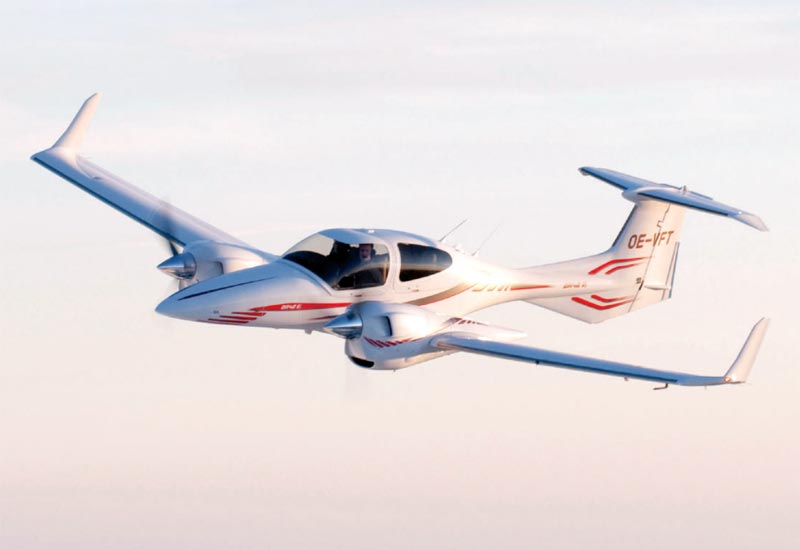