The Junkers EF 126 was in response to the Emergency Fighter Program enacted by German Luftwaffe officials during the middle of 1944.

Authored By: Staff Writer | Last Edited: 07/24/2018 | Content ©www.MilitaryFactory.com | The following text is exclusive to this site. 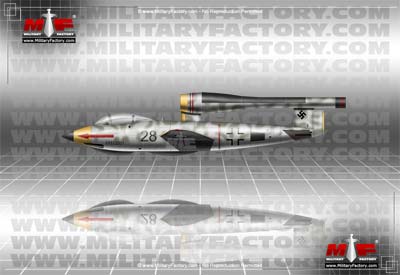 The "Emergency Fighter Program" (EFP) was established by German Luftwaffe authorities on July 3rd, 1944 with the intention of bringing about a whole new generation of interceptor-fighter to counter the threat posed by British and American bombing raids. The raids had become a regular occurrence over Germany and German-held territories and had steadily wreaked havoc on industry, infrastructure, morale, and war-making facilities. The idea was to design, develop, and produce - in short order - aircraft of such capability that these could be used to stem the tide of the air war, if only for a short while.

The commitment to new interceptor-fighters meant that Germany had all but abandoned the pursuit of prop-driven, multi-engined bombers. In their place would be jet-powered bomber forms while much investment was to be given to new low-cost piston/rocket/jet powered fighters instead - the aircraft cleared to use any and all manner of propulsion schemes and firepower. The new fighter program ultimately yielded mixed results with the most successful entrant becoming the Heinkel He 162 "Volksjager" jet-powered single-seat, single-engine fighter (detailed elsewhere on this site) while many were left to languish on drawing boards, as wooden mockups, wind tunnel forms, or incomplete prototypes captured at the end of the war.

For Junkers, the EF 126 was a forgotten entry into the EFP. Like others of its kind, the aircraft was proposed with a single engine and single-seat cockpit while utilizing low-cost production processes. The design incorporated the cockpit under a bubble canopy over the nose of the aircraft with the engine, a pulse jet, seated over the dorsal spine of the fuselage suspended atop two support structures fore and aft. The Wing mainplanes would be situated at midships and be mid-mounted along the fuselage sides. The members were also straight in their general shape with no true sweep being added for high-speed flight. The overall shape of the fuselage would be of a slim teardrop for a strong aerodynamic quality.

The aircraft was to have an overall length of 27.8 feet with a wingspan reaching 21.9 feet and a height of 6.2 feet. Empty weight was listed at 2,425lb against an MTOW of 6,175lb. The proposed powerplant was a single Argus 109-044 pulse jet engine set to develop 1,100lb of thrust offering the airframe an estimated top speed of 485 miles per hour and a range out to 220 miles. The fast-burning engine would give about 20 to 45 minutes of flight time before expending its fuel supply but also offer the compact fighter a rate-of-climb nearing 94,000 feet-per-minute - and excellent quality for an interceptor to have.

Proposed armament was 2 x 20mm MG 151/20 autocannons which would have given the aircraft a good punch against Allied bombers. A secondary bombing role was also proposed with the airframe planned to carry up to 880lb of externally-held stores.

The EF 126 never materialized during the war as a viable solution for the EFP. However, the conquering Soviets captured the work already completed and furthered the project in the post-war period. As an unpowered aircraft (that is, lacking its pulse jet engine), the EF 126 achieve a "first flight" on May 21st, 1946 - this while under tow by a captured Junkers Ju 88 medium bomber. However, this example, designated the EF 126 V1 - crashed during its testing phase.

The EF 126 V2 was to become the second prototype but was never completed. The EF 126 V4, V5, and V6 were all forms completed with their pulse jets. The EF 126 was also used as the framework for the wartime "EF 127" - a heavily-reworked, rocket-powered version of the original pulse jet fighter. This design also managed to make little progress for its time and ultimately fell to the pages of aviation history.
Advertisements

(Showcased performance specifications pertain to the Junkers Ju EF 126 V1 production variant. Compare this aircraft entry against any other in our database or View aircraft by powerplant type)
PROPOSED:
2 x 20mm MG 151/20 autocannons.

OPTIONAL:
Up to 880lb of externally-held conventional drop bombs.

General Assessment
Firepower
Performance
Survivability
Versatility
Impact
Values are derrived from a variety of categories related to the design, overall function, and historical influence of this aircraft in aviation history.
Overall Rating
The overall rating takes into account over 60 individual factors related to this aircraft entry.
26
Rating is out of a possible 100 points.
Relative Maximum Speed
Hi: 500mph
Lo: 250mph
This entry's maximum listed speed (485mph). 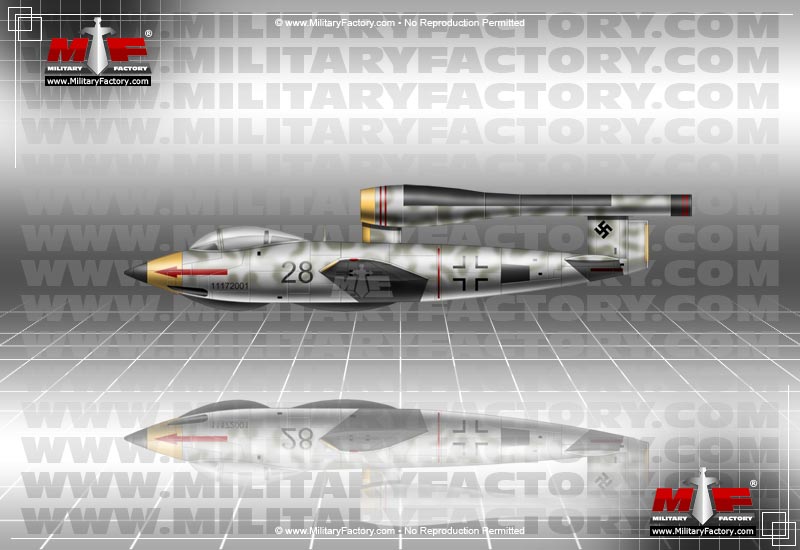