The General Atomics MQ-9B Protector is an offshoot of the Predator B UAV family line intended to meet NATO and FAA standards for both military and commercial airspace operation.

Authored By: Staff Writer | Last Edited: 10/12/2022 | Content ©www.MilitaryFactory.com | The following text is exclusive to this site. 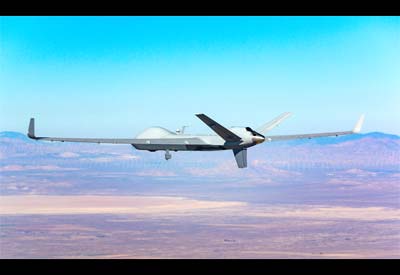 In an effort to meet newer, more demanding NATO and American FAA regulations for airworthiness standards in civil airspaces around the globe, General Atomics is developing an offshoot of its hugely successful MQ-9 "Predator B" Unmanned Aerial Vehicle (UAV) as the MQ-9B "Protector". The type features upgrades at both the software and hardware levels to better serve in various global environments while also being protected against natural dangers such as bird strikes, icing, and lightning. Britain's Royal Air Force (RAF) has committed to the type and the service expects to receive its first units before the end of 2018 with type certification expected between 2021 and 2022 (civil airspace certification will arrive later). This certification will allow the air vehicle to legally fly over population centers with the intended goal of monitoring and coordinating disaster responses and the like.

The Protector maintains the Predator's proven form and function, the sleek fuselage housing the primary avionics suite, optics fit, and powerplant. The wings are straight monoplanes with winglets at the tips. An optics package is positioned in a trainable blister pack under the chin. A Y-shaped tailplane arrangement is used that features a pair of outward-cranked fins and a single downward-cranked plane. The undercarriage sports three thin legs, all wheeled. At the rear of the aircraft is a three-bladed propeller unit arranged in "pusher" fashion.

The Protector is to have a maximum speed of 210 knots with a mission endurance window of some forty hours and a total product life of 40,000 hours. Operational ceilings will reach 40,000 feet. Supported systems are set to include the Raytheon MTS-B Electro-Optical / InfraRed (EO/IR) sensor fit, the GA-ASI "Lynx" multi-mode mission radar, and a true sense-and-avoid / all-weather functionality. Mission payloads will be modular to allow customers to append the product as needed.

The MQ-9B platform is also forming the basis for the armed "SkyGuardian" Unmanned Combat Aerial Vehicle (UCAV) which will feature support for precision-based guided munitions. Similarly, the "SeaGuardian" is being developed as a multi-mission maritime patroller with surface-search radar to meet the demands of over-water sorties in both the military and civilian spheres.©MilitaryFactory.com
Note: The above text is EXCLUSIVE to the site www.MilitaryFactory.com. It is the product of many hours of research and work made possible with the help of contributors, veterans, insiders, and topic specialists. If you happen upon this text anywhere else on the internet or in print, please let us know at MilitaryFactory AT gmail DOT com so that we may take appropriate action against the offender / offending site and continue to protect this original work.

July 2018 - The MQ-9B SkyGuardian prototype was flown to RAF Fairford in England from Grand Forks, North Dakota - covering some 24 hours in the air. This marks the first such venture by a Medium-Altitude, Long-Endurance (MALE) unmanned aircraft.

November 2018 - Belgium has selected the MQ-9B SkyGuardian to fulfill its MALE requirement.

February 2019 - General Atomics has entered into agreements with France-based MBDA and America-based Raytheon to further its UK "Protector" program work for the Royal Air Force (RAF) / Royal Navy - this will provide Protector support for missiles/bombs developed by both respective companies ("Brimstone" and "Paveway IV").

March 2019 - The General Atomics MQ-9B is one of several UAVs that will content for a Japanese Coast Guard requirement encompassing twelve drones.

March 2019 - The U.S. State Department has approved the sale of MQ-9B drones to the nation of Belgium under the Foreign Military Sale (FMS) program. The country now joins the United Kingdom as a foreign operator of the type.

May 2019 - The MQ-9B is a possible acquisition target for Canada, competing with the Israeli Heron TP line.

July 2019 - The UK has announced its intention to retire its fleet of Reaper UAVs in 2024 in favor of the newer MQ-9B "Protector" series.

November 2020 - The U.S. State Department has approved the sale of four MQ-9B SkyGuardian UAV systems to the island nation of Taiwan.

November 2020 - The United Arab Emirates has been approved for the purchase of the MQ-9B. Up to eighteen systems will be procured by the Gulf nation.

August 2021 - The SkyGuardian UAV has arrived at RAF Waddington, England in preparation for flight testing with the service.

March 2022 - SeaGuardian was exhibited at DOHA 7 by General Atomics.

April 2022 - Australia announced that it will not be acquiring twelve-to-sixteen MQ-9B unmanned systems as originally planned.

September 2022 - Amidst a backdrop of increasing Chinese aircraft incursions into Taiwanese airspace, the island nation of Taiwan has ordered four MQ-9B systems as a counter.

October 2022 - The British MoD has accepted delivery of its first Protector RG.1 UAV system intended to serve with the Royal Air Force.

(Showcased performance specifications pertain to the General Atomics MQ-9B Protector production variant. Performance specifications showcased above are subject to environmental factors as well as aircraft configuration. Estimates are made when Real Data not available. Compare this aircraft entry against any other in our database or View aircraft by powerplant type)
Mission fit consisting of sensors and data-collecting equipment with ordnance support for MBDA "Brimstone" missile and Raytheon "Paveway IV" precision-guided bomb. 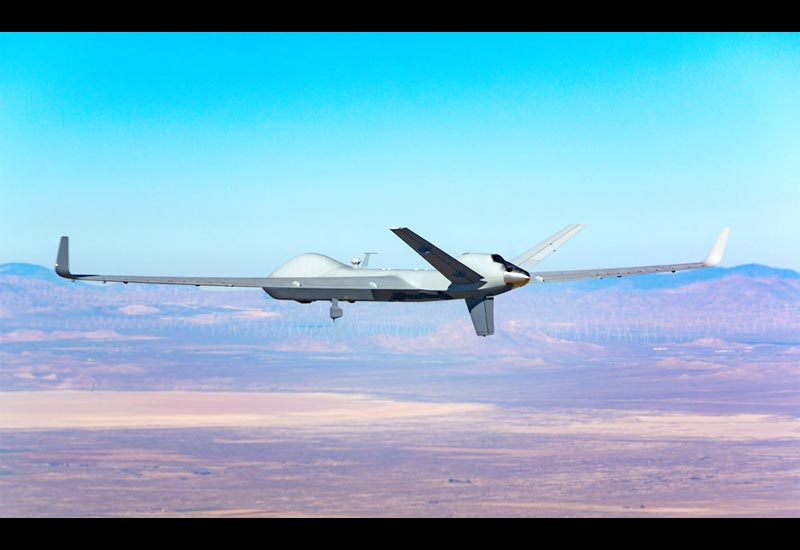