The Sukhoi Su-33 Flanker is the navalized version of the base Su-27 Flanker air superiority fighter.

Authored By: Dan Alex | Last Edited: 04/27/2020 | Content ©www.MilitaryFactory.com | The following text is exclusive to this site. 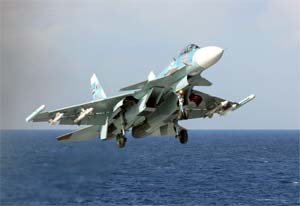 The Sukhoi Su-33 (NATO: "Flanker-D") represents the navalized equivalent of the land-based Russian-produced Sukhoi Su-27 "Flanker" series of air superiority aircraft which itself was developed and produced by the Soviet Union to rival the new American McDonnell Douglas F-15 "Eagle" air superiority mount during the Cold War. The Su-33 initially existed as the Su-27K (from the T-10K prototype) before securing its official designation and first flight was recorded on August 17th, 1987. Operational level service was attained in 1995 though the aircraft was not formally introduced into Russian Naval Aviation service until August 31st, 1998. Su-33s are assigned to the deck of the Admiral Kuznetsov - the only operational Russian Navy aircraft carrier in service (2012). Only 24 Su-33 systems have been produced to date (2012), showcasing the limited power of the modern Russian Navy compared with its land and air force strength. The navalized Mikoyan MiG-29K is set to replace the ship-based Su-33 fleet by 2015.

During the Cold War, the Soviet Navy fell largely behind the West in terms of sea-based aerial firepower. With the VTOL Yakovlev Yak-38 (NATO: "Forger") being the only available mount, thought was given to modernizing the attack wing with a more flexible solution. In conjunction with this new requirement, a new carrier design was also formulized to expand the tactical capabilities of the Soviet Navy. By the late 1970s, the excellent Mikoyan MiG-29 "Fulcrum" and Sukhoi Su-27 "Flanker" air superiority aircraft were both introduced and these became the basis for several navalized versions to follow (as the "MiG-29K" and "Su-27K" respectively). As the Soviet carriers was smaller in overall size when compared to US Navy full-size carriers, a ski ramp was affixed to the launching end of the flight deck. As such, the MiG-29K and Su-27K were appropriately modified for the role.

Outwardly, the Su-33 shares the same smooth contours of the land-based Su-27 series. The aircraft is a single-seat mount powered by twin engines. Wings are high-mounted and well-swept along their leading edges. The cockpit is set to the front of the tubular fuselage and set well-aft of a long nose cone assembly. The pilot is afforded excellent views out of the cockpit thanks to its elevated positioning and lightly-framed canopy. Intakes used to aspirate the twin engine configuration are set well-aft of the cockpit and positioned along the underside of the aircraft. The engines exhaust at the rear through conventional circular exhaust port rings. The Su-33 sports twin vertical tail fins and conventional tailplanes. The undercarriage is fully-retractable and consists of two single-wheeled main legs and a twin-wheeled nose leg. When at rest, the Su-33 maintains a very tall stance, with ample clearing of its underwing ordnance hardpoints.

Key differences with the Su-33 are apparent when compared to the land-based Su-27 series and these have been necessitated by the confines of life at sea aboard space-strapped aircraft carriers. The undercarriage has been properly reinforced for the rigors of flight deck operations and an arrestor hook ensures short landing distances upon recovery. Each main wing assembly and horizontal tailplanes are constructed to fold upwards along the respective mid-points which drastically reduces its storage footprint. The Su-33 has also been given forward canards (small wing assemblies ahead of the main wings) and enlarged moving wing surfaces for improved low-speed stability, useful when taking-off from short runways or attempting to land on a moving runaway. The Su-33 has also been completed with an in-flight refueling probe which critically extends the aircraft's operational range to nearly limitless coverage over war theaters assuming proper maintenance cycles are also met.
Advertisements

As an air defense fighter platform, the Su-33 is cleared to carry various Soviet/Russian ordnance for the air-to-air attack role across its twelve external hardpoints. The Su-33 can be outfitted with 8 x Vympel R-27R1/R-27T1 (NATO: AA-10 "Alamo") medium-range missiles, 8 x R-77 (NATO: AA-12 "Adder") medium-range active-radar homing missiles or 4 x R-73E (NATO: AA-11 "Archer") short-range missiles or a mixture of the three to suite most any ranged aerial threat. Not lost on the Russian Navy is close-ranged combat to which the Su-33 is given an internal 30mm GSh-30-1 cannon to which 150 projectiles are stored aboard. The Su-33 can also be given the secondary role of tactical ground attack and is cleared to carry guided/unguided munitions (S-8KOM, S-8OM, S-8BM, S-13T, S-13OT, S-25-OFM-PU), conventional drop bombs (50kg, 100kg, 250kg and 500kg types), the RBK-500 cluster bomb and rocket pods. Additionally, Russian-developed Electronic CounterMeasure (ECM) pods are available to help counter threats from tracking radars. Interestingly, the Su-33 is not designed to accept external fuel tanks instead relying on its probe-and-drogue in-flight refueling capability.

Su-33 avionics consists of a modern fire control system (FCS) centered on a search-and-tracking radar housed in the nose cone assembly. The aircraft is outfitted with an IRST and laser rangefinder as standard and this includes an optical search and tracking station as well as a helmet-mounted target designator system. IFF (Identification Friend or Foe) system interrogator and transponder are also standard while the pilot enjoys a widescreen HUD displaying pertinent information without the need to look down. A Doppler and GPS-based navigation system make up one of the aircraft's vital suites. The countermeasures kit includes an integrated Radar Warning Receiver (RWR), chaff and flare dispenser and an ECM radio jamming transmitter in a pod.

The Su-33 is powered by 2 x NPO Saturn AL-31afterburning turbofan engines developing 16,750lbs of dry thrust each. On afterburn (raw fuel pumped into the engine for short bursts of power and, therefore, speed), the engines output up to 28,200lbs of thrust allowing the airframe to reach speeds of Mach 2.17. Operational range on internal fuel stores is 1,860 miles with a service ceiling of 55,800 feet and rate-of-climb listed at 48,500 feet per minute.

The Su-33 has been developed into two major production variants. The first is the base single-seat Su-33 air defense model. The second is the twin-seat Su-33KUB advanced carrier training mount with combat capabilities as secondary. In the latter variant, the forward fuselage is appropriately redesigned to accept the second cockpit (side-by-side seating) while internal volume is limited. First flight of the Su-33KUB was recorded in April of 1999 and was based on the 10KUB prototype appearing in the mid-1990s. According to Sukhoi material, the Su-33KUB is still in testing and these have been further evolved with thrust-vectoring engine exhaust nozzles and AL-31FP series turbofan engines. A modernized Su-33 - the Su-33K - was planned by incorporating the more advanced technology of the Su-35 "Super Flanker" (NATO: "Flanker-E") program to the existing Su-33 aircraft. However, it does not appear that this program succeeded.

The Su-33 has never been purchased by foreign operators and is therefore only utilized by Russian Naval Aviation. Sukhoi attempted to sell its Su-27 navy derivative to China and India but these initiatives fell to naught - China electing to reverse-engineer the Su-33 as the Shenyang J-11B and India settling on the more advanced MiG-29K. While in operational service with the Russian Navy, the days of the Su-33 are numbered.
Advertisements

(Showcased performance specifications pertain to the base Sukhoi Su-33 (Flanker-D) production variant. Compare this aircraft entry against any other in our database or View aircraft by powerplant type)
STANDARD:
1 x 30mm GSh-30-1 internal cannon

OPTIONAL:
Mission-specific armament mounted externally across 12 hardpoints may include any of the following:

(Not all ordnance types may be represented in the showcase above)
Hardpoint Mountings: 12 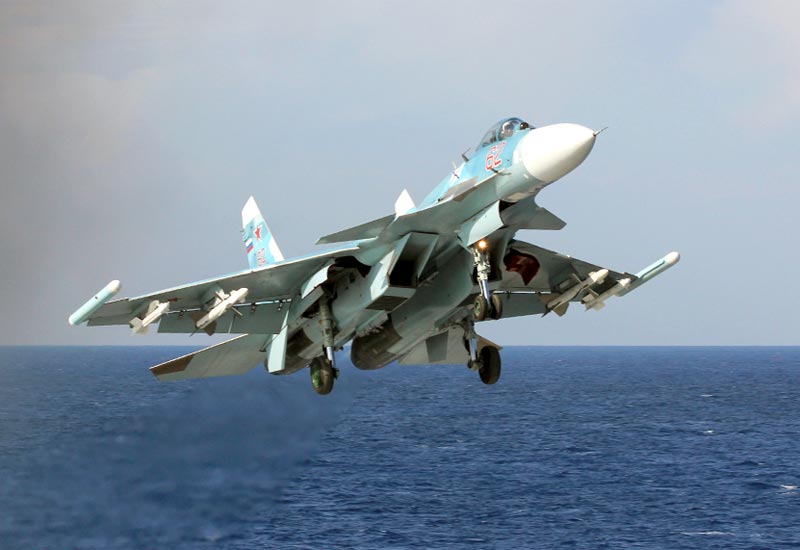 Image from the Russian Ministry of Defense.
2 / 8 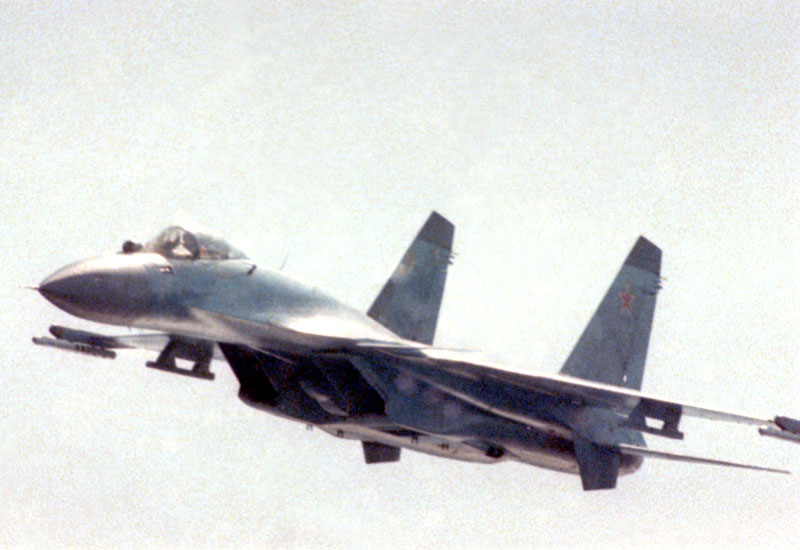 Image from the United States Department of Defense.
3 / 8 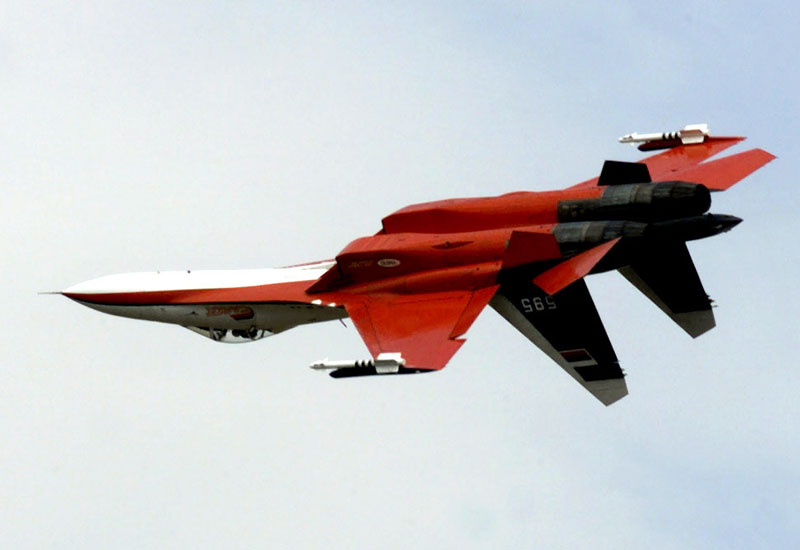 Image from the United States Department of Defense.
4 / 8 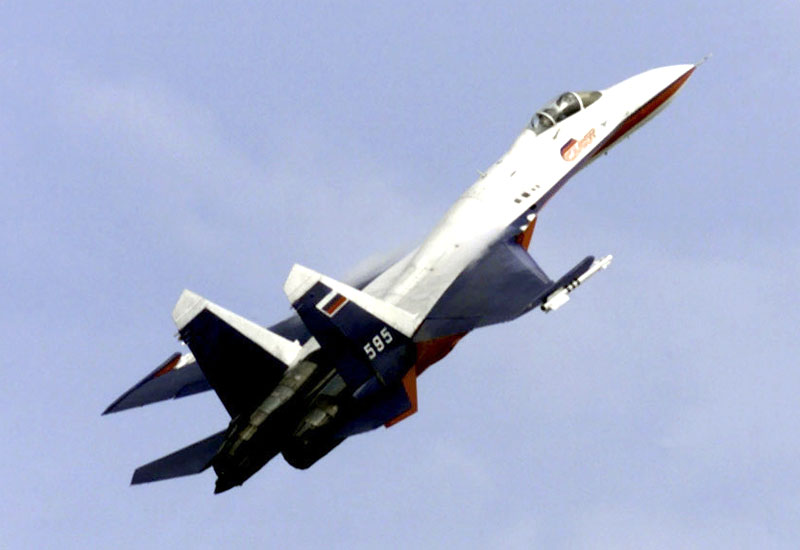 Image from the United States Department of Defense.
5 / 8 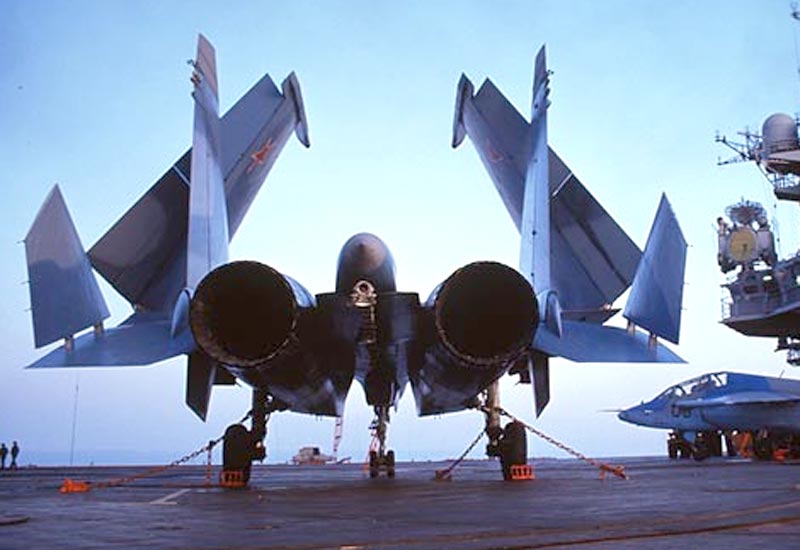 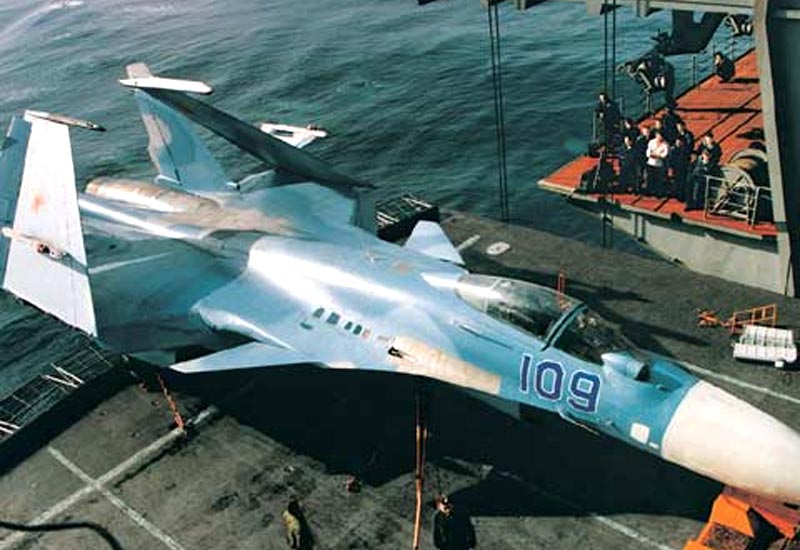 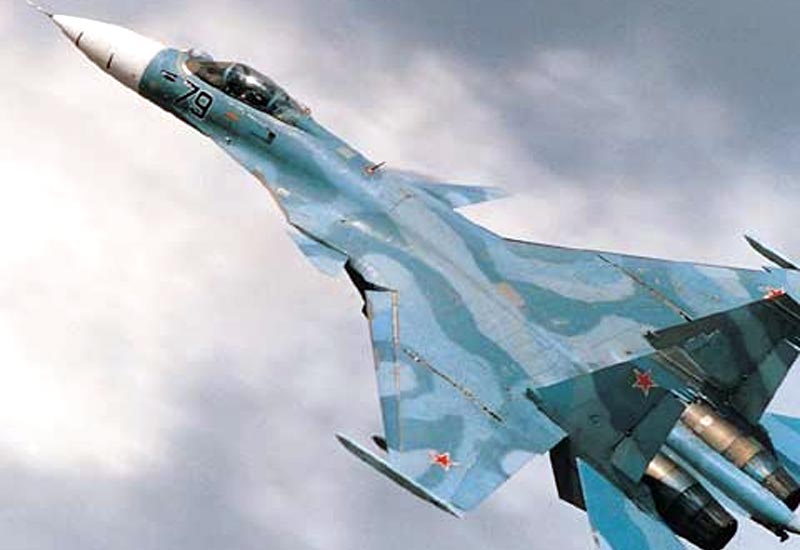 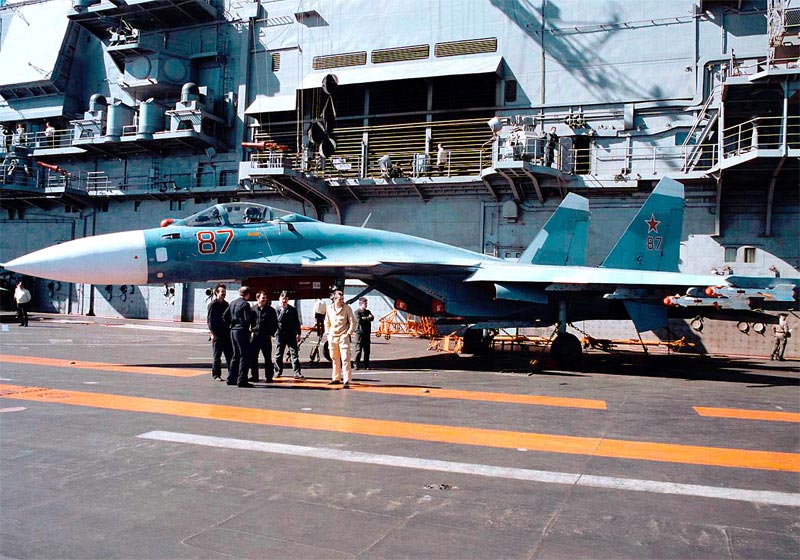