The Grumman XTSF-1 was another contender to replace the war-winning TBF Avenger family - only a mockup was completed. 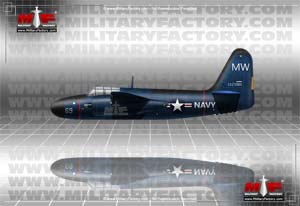 It was long road towards acceptance of a twin-engined aircraft for carrier-based operations by the United States Navy (USN) during World War 2 (1937-1945). This was eventually realized with the adoption of the Grumman F7F "Tigercat" which first-flew on November 2nd, 1943 but the design arrived too late to see combat service in the conflict. Three hundred sixty-four of the type were built but only the late-model F7F-4N was actually certified for carrier deck operations - the rest of the lot were operated from land bases.

During the latter half of the war, the USN was actively searching for a replacement for its war-winning Grumman TBF "Avenger" torpedo bomber. This single-engine, three-crew platform was built in nearly 10,000 examples before the end of its run and went on to be used by various global air services during the war and after it. There were several attempts, such as the XTB2F-1 (detailed elsewhere on this site), that were meant to succeed the classic Navy attacker.

The XTB2F-1 ended up being much too large and heavy for service aboard the Essex- and Midway-class aircraft carriers and was cancelled after a review of the mockup. The service then turned its attention to another possible candidate - this in the form of a modified F7F Tigercat - to which Grumman responded with the "Model G-66" proposal. Use of the existing Tigercat design was intended to speed up development and production while also controlling costs. Grumman responded with a concept in June of 1944 and this form was revised some following a Navy review in July of that year. A development contract was then handed over in August to cover a pair of flyable prototypes under the XTSF-1 designation. By this point, the Navy foresaw a combat aircraft capable of torpedo delivery but also in scouting the vast expanses of the Pacific (so inherent range was equally important). A mock-up became ready for review in October of 1944.

From the base F7F-2 airframe, Grumman engineers reworked the fuselage to accept radar and a bomb bay. The former was installed in an enlarged nose cone which immediately changed the fine lines of the Tigercat for the worse and added nearly six inches to her length. The intended radar fit would have been the AN/APS-3 or AN/APS-4 series models. The existing bomb bay of the TBF was installed into the slim body of the Tigercat which also reworked the fine contouring once present in the original Grumman heavy fighter.
Advertisements

All of the wing surfaces were either enlarged or lengthened for the added control needed in the torpedo bombing role. One of the few qualities of the Tigercat left untouched was its 2 x Pratt & Whitney R-2800-22W "Double Wasp" air-cooled radial piston engines of 2,400 horsepower each. These would be used to drive four-bladed propeller units and held in streamlined nacelles at each wing mainplane, extending beyond both the leading and trailing edges.

Dimensions included a length of 46.3 feet, a wingspan of 59.4 feet and a height of 16 feet. To stow properly on American carriers, the wings were made to fold which reduced the span to 32 feet. Empty weight was estimated at 17,300lb with a gross weight ballooning to nearly 26,200lb. A crew of two would be featured.

Estimated performance had the aircraft reach speeds between 390 and 415 miles-per-hour with a range out to 975 miles on internal fuel alone (with a listed combat radius of 420 miles). Its service ceiling was proposed at 36,500 feet with a rate-of-climb reaching 4,000 to 4,400 feet-per-minute.

The original Tigercat armament was reworked to be just paired 0.50 caliber heavy machine guns found at each inboard wing section. Provision was made to also replace these weapons with single-mounted 20mm autocannons at a future date. The internal bay could hold up to 2,000lb of stores, these being either a single Mark 13 torpedo, a large bomb, a collection of smaller bombs, depth charges or naval mines. There would be two external underwing hardpoints set to carry an additional 1,000lb of ordnance (each).

Just like the earlier XTB2F-1 proposal, the XTSF-1 was also thought to be much too large and heavy for service on the then-current generation of American fleet carriers. This ended all hope for the Tigercat conversion as a torpedo bomber and the XTSF-1 was cancelled as soon as January of 1945. The war ended in August of that year.
Advertisements

(Showcased performance specifications pertain to the Grumman XTSF-1 production variant. Compare this aircraft entry against any other in our database or View aircraft by powerplant type)
PROPOSED:
4 x 0.50 caliber heavy machine guns in wing roots (provision had for later upgrading these to 2 x 20mm automatic cannon installations).

OPTIONAL:
Internal bomb bay for up to 2,000lb of stores including torpedoes, conventional drop bombs, naval depth charges, and / or naval mines.

Two external hardpoints to carry an additional 1,000lb of conventional drop stores each.

XTSF-1 - Base Series Designation; mock-up work was all that was had on the project before cancellation. 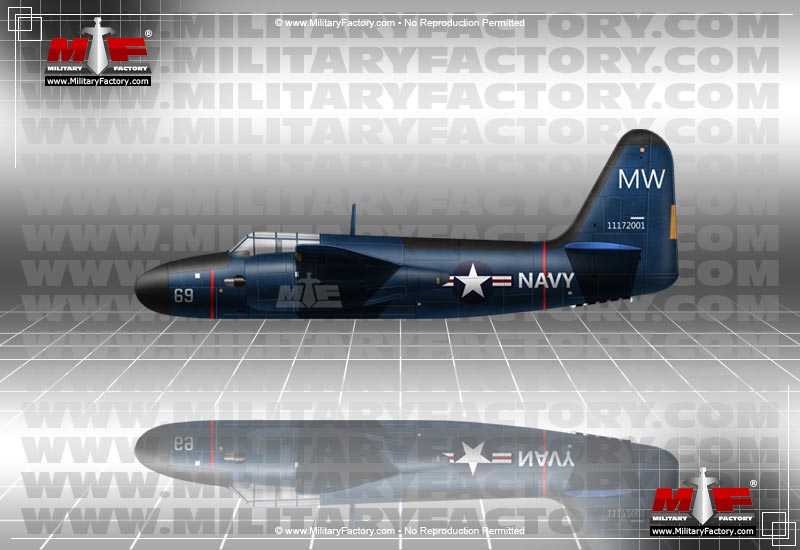