Authored By: Dan Alex | Last Edited: 12/08/2021 | Content ©www.MilitaryFactory.com | The following text is exclusive to this site. 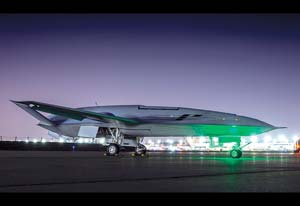 The MQ-25 "Stingray" is an ongoing United States Navy (USN) project drawn up to satisfy an unmanned aerial refueling tanker aircraft product for service aboard its large fleet of aircraft carriers. Program requirements include a minimum fuel load of 14,000lb and a fly-out range of 500 miles from the host ship. Current (2018) competitors in the Stingray program are Boeing, General Atomics and Lockheed Martin. Northrop Grumman bowed out of the running voluntarily in 2017 - it was to feature its high-profile X-47B carrier-based UAS in its submission. The USN hopes to field the Stingray at an operational level by the middle of the next decade (about 2025) with a formal selection planned for August of 2018. Boeing is also part of the General Atomics initiative to better help it secure the potentially lucrative MQ-25 contract.

The 2000s saw an explosion of Unmanned Air Systems (UASs) in the military sphere so it comes as no surprise that the United States Navy (USN) has since been seeking an unmanned aerial tanker for which to field on its various aircraft carrier decks. What originally began as the USN's "Unmanned Carrier-Launched Airborne Surveillance and Strike" (UCLAS) program has now evolved to the "Carrier-Based Aerial-Refueling System" (CBARS). The product was officially designated as MQ-25 "Stingray" as of July 2016.

The Boeing submission is from its secretive "Phantomworks" branch and appears to have been influenced some by the company's earlier work on the UCLASS attack drone - that requirement, in fact, having being evolved by the USN to become the unmanned tanker project. The new air vehicle was debuted by Boeing via press release on December 19th, 2017 and showcases a blended wing-body design with swept-back mainplanes. The tailplanes consist of a pair of outward-canted surfaces. The undercarriage is of a wheeled tricycle arrangement for ground-running and each main leg carries a single wheel while the nose leg is reinforced with a double-wheeled configuration. The fuselage is well-rounded and streamlined though noticeably deep from the forward profile - designed to carry the needed avionics, powerplant(s) and fuel stores. Folding wings are assumed for the design as this is something of a prerequisite for carrier-based aircraft considering space restrictions and the like.

For carrier operations, the MQ-25 is required to navigate the crowded deck of an active aircraft carrier, moving from elevator-to-catapult for launch and deck-to-elevator upon its return from a mission. This requires a unique approach to its intelligence programming to accomplish. Additionally, the aircraft will be called to operate over water for most of its service life when servicing the various USN aircraft in play - presenting another set of challenges for engineers tied to the project. Beyond this, the usual naval aviation qualities are given the aircraft - a reinforced structure / understructure to handle the rigors of carrier life, special skin coatings to combat the salty sea environment, day-night operations capabilities, and an arrestor hook for carrier deck landings. All this on top of autonomous operation and a fuel delivery functionality when working alongside manned aircraft.

The Stingray is required to refuel all types of in-service USN aircraft (as well as the upcoming F-35C Lightning II) and marks a major stepping stone for the future of naval aviation - giving at-sea aircraft the capability to be quickly and efficiently refueled by an unmanned, autonomously-minded aircraft. Such aircraft will allow fuel-laden conversions, like those made to the F/A-18 E- and F-models, to be reworked back into their combat forms. Beyond their fuel-delivery capabilities, the MQ-25s are expected to have a secondary ISR (Intelligence, Surveillance, Reconnaissance) role and carry radar for maritime operations in support of the main fleet.

With the induction of the Stingray into its ranks, the USN plans to retain its deep inventory of F/A-18 Super Hornets and the newly-arriving F-35 Lightning IIs for the strike role and no longer rely on manned aerial tankers built upon existing combat aircraft frameworks. The Stingray will be used to fuel, in-flight, the various in-service platforms of the USN including the above-mentioned types.

As it stands (December 2017), Boeing states that the MQ-25 is undergoing the final phases of its engine testing and conducting basic runs. Deck-handling demonstrations are scheduled for sometime in 2018. The USN deadline for submissions in the Stingray program was January 3rd, 2018. The service plans to procure some seventy-two unmanned MQ-25 Stingrays for active service aboard its carrier decks before the end.

The Boeing concept was partially unveiled in December of 2017 though it had been in existence since November of 2014 and born on paper in 2011. Captured images were then released in January of 2018 and official images followed in March of 2018. The Boeing MQ-25 prototype (known as the "T1") is currently (2018) undertaking carrier-suitability trials and has yet to complete its maiden flight as of this writing.

Performance and dimensions specifications on this page are estimated on the part of the author.

April 2018 - It was announced that Boeing has selected the Rolls-Royce AE3007 turbofan engine to power its MQ-25 aerial tanker UAV prototype.

August 2018 - The Boeing MQ-25 Stingray has been announced as the winner of the USN refueling drone project. The initial contract is for four air vehicles for testing. The USN expects the first air-worthy vehicle to be delivered in 2020 and a first-flight scheduled for 2021 - opening the path to service entry in the early part of 2024.

February 2019 - The USN has awarded B.L. Halbert International a $41.8 million USD contract to construct a hangar to house the MQ-25 Stingray at NAS Patuxent River (Maryland).

September 2019 - The United States Navy has begun working with an MQ-25A developmental example, completing a first-flight on September 19th, 2019 that lasted two hours. Service entry of the unmanned type is tentatively scheduled for 2022 or 2023.

October 2019 - Boeing has been charged by the National Geospatial Intelligence Agency (NGA) with studying the possibility of integrating the Boeing "Multi-Mission Pod" (MMP) into the existing framework of the MQ-25 UAV to serve in the maritime (over-water) patrol role alongside the Boeing P-8A "Poseidon" Maritime Patrol Aircraft (MPA).

April 2020 - The United States Navy has awarded Boeing with a contract for three additional MQ-25A unmanned systems for demonstration testing. The deal is worth $84.7 million USD awarded on April 2nd.

May 2020 - Boeing will begin construction of four developmental MQ-25 aircraft for engineering testing.

June 2021 - An MQ-25 prototype successfully completed an air-to-air refueling operation with a Boeing F/A-18F Super Hornet in testing. The action took place at 10,000 feet of altitude in Missouri Airspace on June 4th, 2021 and marked a first of its kind. The system is expected to come online in 2025.

RADAR-CAPABLE Houses, or can house (through specialized variants), radar equipment for searching, tracking, and engagement of enemy elements.
FOLDING WING(S) Mainplanes are designed to fold, improving storage on land and at sea.
RUGGED AIRFRAME Inherent ability of airframe to take considerable damage.
HIGH-SPEED PERFORMANCE Can accelerate to higher speeds than average aircraft of its time.
HIGH-ALTITUDE PERFORMANCE Can reach and operate at higher altitudes than average aircraft of its time.
EXTENDED RANGE PERFORMANCE Capability to travel considerable distances through onboard fuel stores.
SUPER PERFORMANCE Design covers the three all-important performance categories of speed, altitude, and range.
MARITIME OPERATION Ability to operate over ocean in addition to surviving the special rigors of the maritime environment.
UNMANNED OPERATION Design features ability to fly sans pilot, actions controlled onboard through programming and / or ground-based operator.
AUTONOMOUS OPERATION Design features autonomous flight operations made possible through onboard artificial intelligence or pre-programming.

(Showcased performance specifications pertain to the Boeing MQ-25 production variant. Compare this aircraft entry against any other in our database or View aircraft by powerplant type)
None. Mission requirement solely consisting of fuel stores. 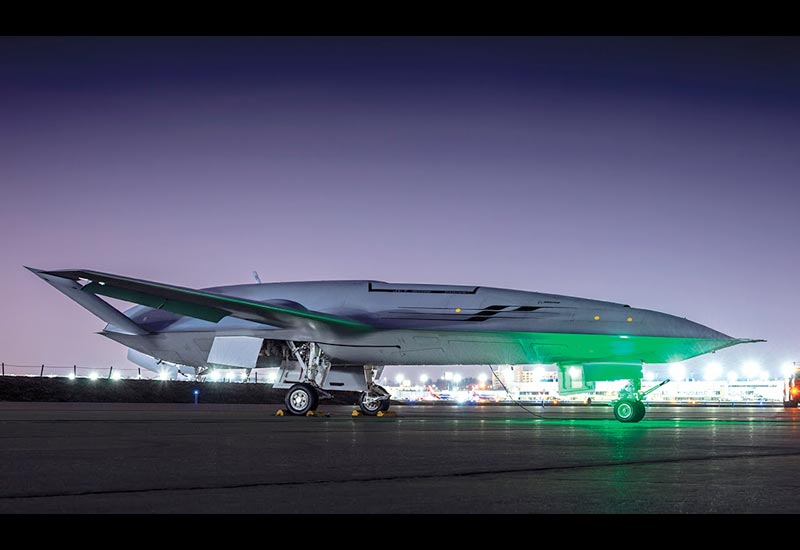 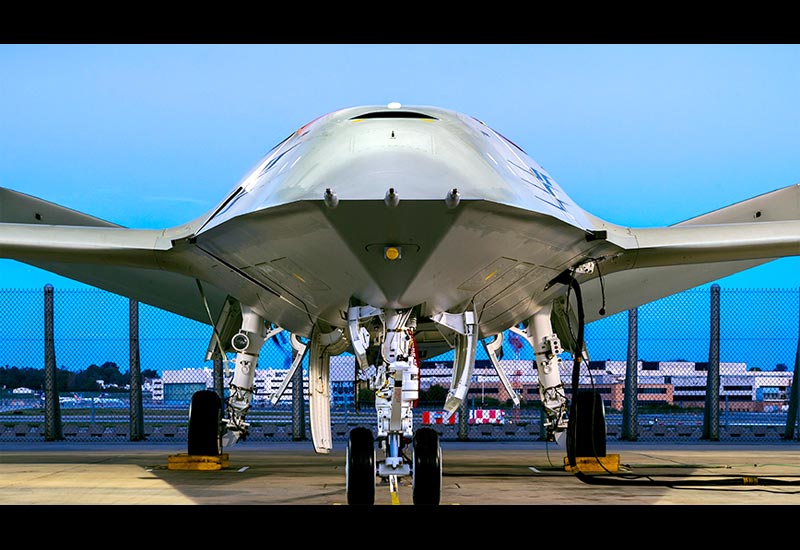 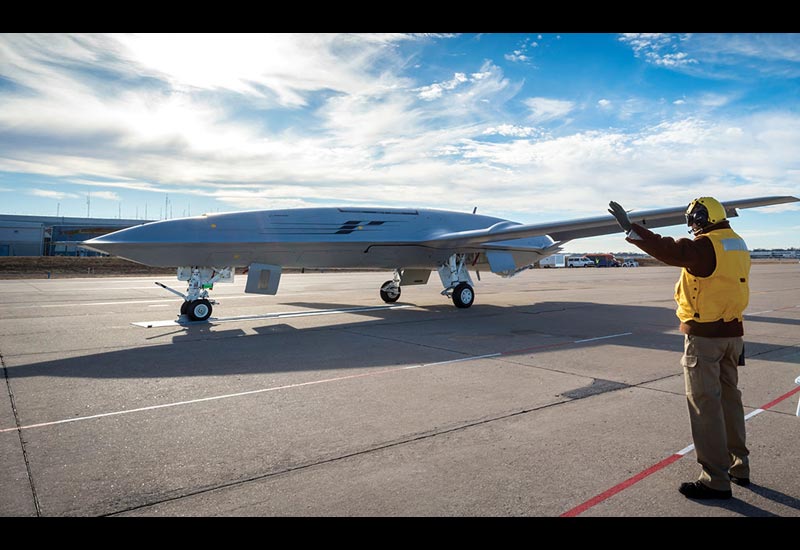 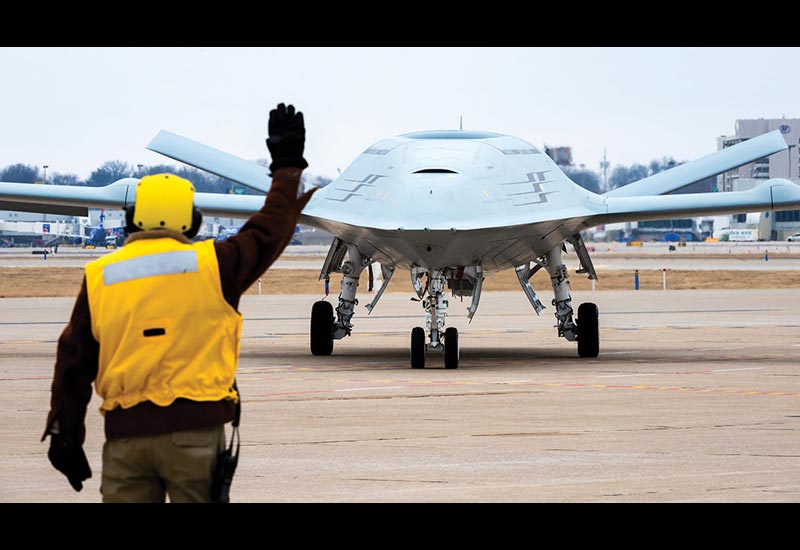 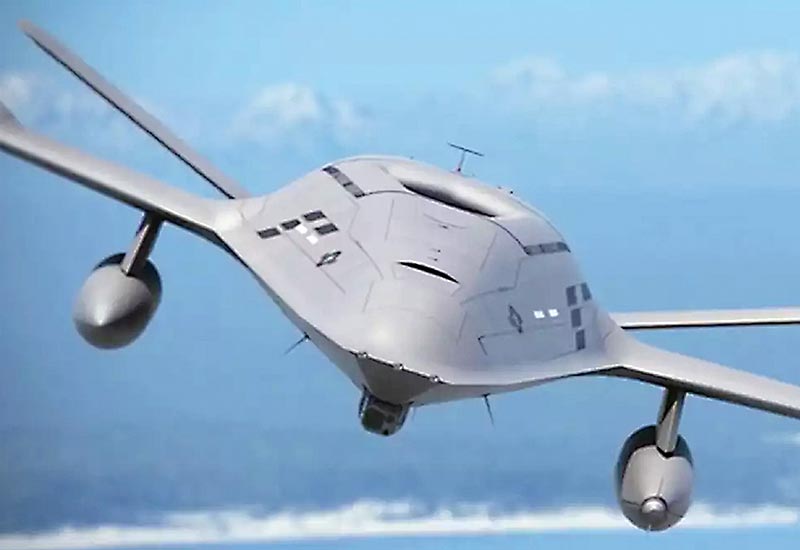