The Super Mystere was the ultimate form of the line of swept-back jet fighters begun with the original Mystere aircraft of 1954.

Authored By: Staff Writer | Last Edited: 07/26/2022 | Content ©www.MilitaryFactory.com | The following text is exclusive to this site. 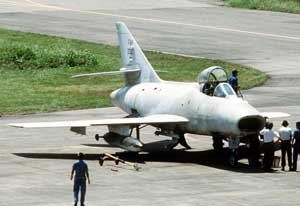 The Dassault "Super Mystere" became the ultimate form of the line of single-seat, swept-wing, jet-powered fighter-bombers of French origin and the first Western European fighter to exceed Mach 1.0 in level flight. The Super Mystere was an extension of the earlier Mystere IV (detailed elsewhere on this site) which was, itself, a further evolution of the Mystere models and the Dassault Ouragan ("Hurricane") even before it. The new aircraft did not see the production success of the Dassault Mystere IV series but was a long-time performer for the French Air Force and saw service with both Israel and Honduras at later dates.

Engineers took this time to enact several additional changes to their fighter design by giving the Super Mystere greater wing sweep (45-degrees) for high-speed flight envelopes. The mainplanes were also of reduced chord which, in turn, reduced frontal drag and aided aerodynamics. The engine of choice became the locally-produced SNECMA Atar 101G-2 turbojet which offered an afterburning capability for short bursts of speed improvements. This, coupled with the new wings, allowed the fighter to exceed the speed of sound in level flight unlike earlier Mysteres which required a dive to achieve the same feat.

The Super Mystere appeared in the B.1 (SMB.2) prototype form and flew for the first time on March 2nd, 1955. Following testing done through five pre-production aircraft (the first flying on February 26th, 1957), the product was in service as soon as 1957 and these forms were given the SNECMA Atar 101G series turbojet engine. From the period of 1956 to 1959 some 180 Super Mysteres were built.

The production model had a crew of one seated aft of the nose-mounted intake and under a lightly-framed canopy. It held an overall length of 46.3 feet with a wingspan reaching 34.5 feet and a height of 15 feet. Empty weight was 14,100lb with a Maximum Take-Off Weight (MTOW) of 22,000lb. The SNECMA Atar 101G-2 offered 7,500lb of dry thrust output and up to 9,920lb of thrust with afterburning engaged (that is, raw fuel pumped into the jet pipe for quick bursts of speed).

Performance included a maximum speed of 745 miles per hour (about Mach 1.12) and a combat range out to 540 miles (ferry range being 730 miles). Its service ceiling reached 56,000 feet and rate-of-climb was an impressive 18,000 feet-per-minute.©MilitaryFactory.com
Advertisements

Aboard were 2 x 30mm DEFA 552 autocannons with 150 projectiles afford per gun. The aircraft could carry 2 x Matra rocket pods with 18 x SNEB 68mm rockets each. Early airframes housed a 35-count 68mm retractable ventral rocket pack but this was soon dropped from production. Provision also included support for air-to-air missiles (including the American "AIM-9 Sidewinder"). There were four hardpoints in all and these were cleared to carry conventional drop bombs, rockets, mission pods and fuel drop tanks (up to 5,000lb).

Contemporaries of the Super Mystere included the North American F-100 "Super Sabre" and the Mikoyan-Gurevich MiG-19 "Farmer" jet fighters (both detailed elsewhere on this site).

The French Air Force made use of the Super Mystere for two decades, finally giving them up in 1977. Some of the stock was then sold to Israel who took delivery of thirty-six in 1958 and these saw combat in the 1967 "Six Day War" as well as the subsequent "Yom Kippur War" of 1973 where they gave good service - even against enemy MiG-19 fighters. In true Israeli fashion, some of the fleet were re-engined with the American Pratt & Whitney J52-P-8A turbojet engines of 9,300lb thrust that helped to alter performance some. These flew under the designation of IAI Sa'ar.

At least twelve of the Israeli stock was sold, in turn, to the Honduras Air Force in 1976 where they ended their days. A follow-up batch secured an additional four fighter-bombers in 1979 and the fleet was used in anger during the border campaign with neighboring Nicaragua. The group soldiered on into the early-to-mid-1990s by which point the Honduran Air Force upgraded to the American Northrop F-5 Tiger / Freedom Fighter line.

At least two Super Mysteres were completed by Dassault under the B.4 designation in, or around, 1958 and these were given the SNECMA Atar 9B afterburning turbojet engine of 13,227lb thrust coupled to revised wing mainplanes featuring 48-degree sweepback. No series adoption or serial production came from this work for the Dassault Mirage III was taking hold in Dassault Aviation marketing.©MilitaryFactory.com
Note: The above text is EXCLUSIVE to the site www.MilitaryFactory.com. It is the product of many hours of research and work made possible with the help of contributors, veterans, insiders, and topic specialists. If you happen upon this text anywhere else on the internet or in print, please let us know at MilitaryFactory AT gmail DOT com so that we may take appropriate action against the offender / offending site and continue to protect this original work.
Advertisements

France; Honduras; Israel
(OPERATORS list includes past, present, and future operators when applicable)
✓ Air-to-Air Combat, Fighter
General ability to actively engage other aircraft of similar form and function, typically through guns, missiles, and/or aerial rockets. ✓ Ground Attack (Bombing, Strafing)
Ability to conduct aerial bombing of ground targets by way of (but not limited to) guns, bombs, missiles, rockets, and the like.

(Showcased performance specifications pertain to the Dassault Super Mystere B.2 production variant. Performance specifications showcased above are subject to environmental factors as well as aircraft configuration. Estimates are made when Real Data not available. Compare this aircraft entry against any other in our database or View aircraft by powerplant type)
2 x 30mm DEFA 552 autocannons under the nose.

Up to 5,000lb of stores across four external hardpoints. Includes drop bombs as well as individual rockets or mission pods / fuel drop tanks. 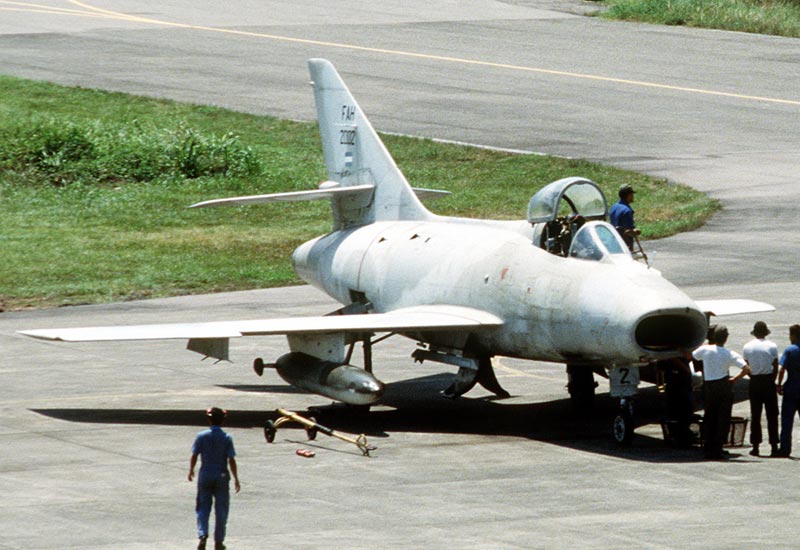 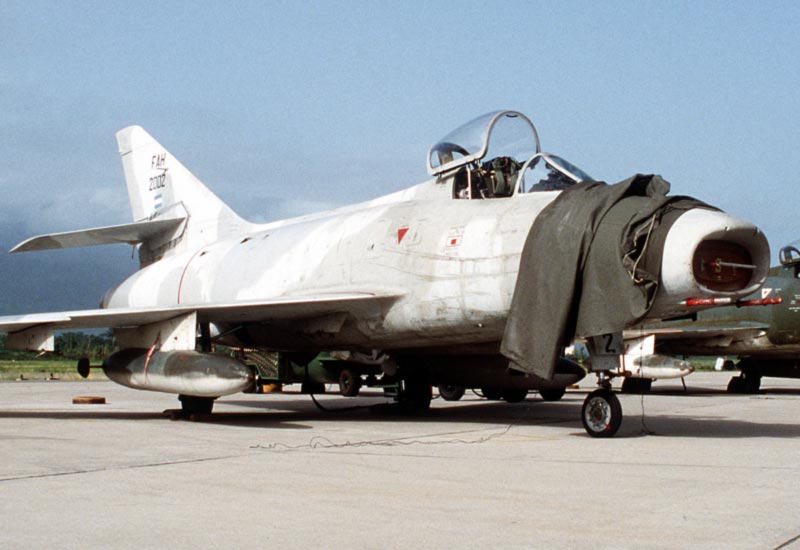 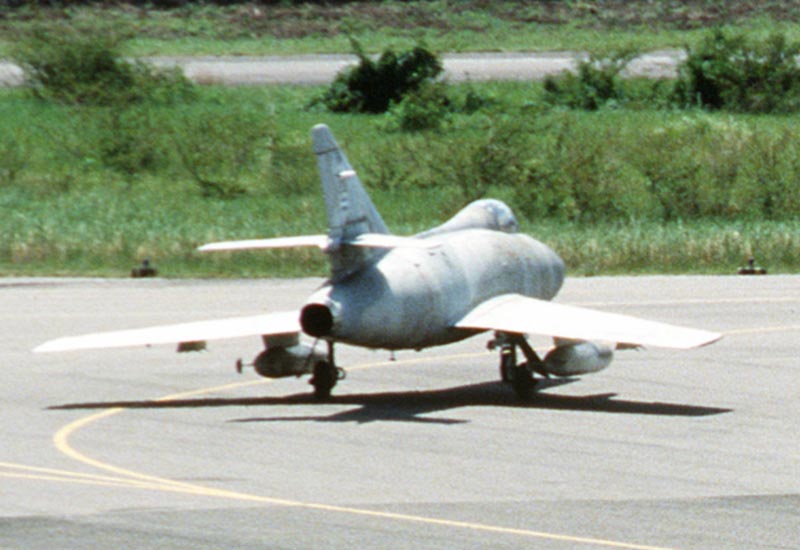 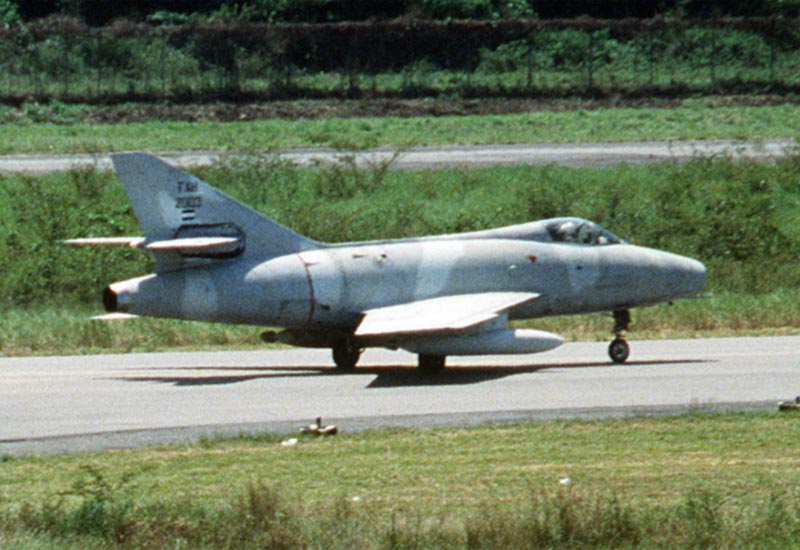 Aviation developments of similar form and function, or related to, the Dassault Super Mystere...