Friedrichshafen manufactured over 300 of its FF.33 series biplane fighters for service in World War 1.

Authored By: Staff Writer | Last Edited: 10/07/2020 | Content ©www.MilitaryFactory.com | The following text is exclusive to this site. 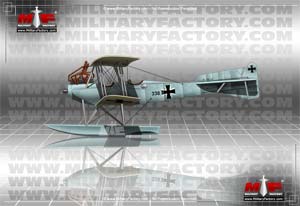 Founded in 1912, Flugzeugbau Friedrichshafen served the German Empire during World War 1 (1914-1918) as an aircraft maker, surviving the Armistice of 1918 and eventually folding 1923. Before their end arrived, the company produced some little-remembered warplanes of The Great War that included the useful FF.33 biplane floatplane for the Kaiserliche Marine (German Navy). The FF.33 first-flew in 1914 and entered service that year. About 315 of two major marks dotted the short-lived career of this aircraft.

As a floatplane, the FF.33 series held the inherent capability of landing and taking off from water sources which gave it a very useful advantage over swaths of open sea. A general biplane arrangement was used which incorporated an upper and lower wing assembly braced by wires and parallel struts. Two open-air, tandem cockpits were used by the two-crew. The engine was mounted to the nose in the usual way and a traditional tail unit was featured.

The initial production model became the FF.33 which carried a Mercedes D.II and only six of this mark were manufactured. The positions of the two crew were reversed in the follow-up FF.33b and power was not from a Maybach inline of 160 horsepower. Just five of this mark were built.

The FF.33e designated the primary reconnaissance mounts driven by a Benz Bz.III series inline and these also were given lengthened floatplanes for better water-running. The float under the tail was removed and communications gear fitted for the crew. About 180 of these were manufactured. These had a maximum speed of 68 miles per hour and endurance out to five hours.

The FF.33e gave rise to the FF.33f, a "fighting scout" variant, which incorporated a reduced wingspan and installed a pivoting machine gun. Five of this type were produced. The FF.33h sported aerodynamic refinements and fifty followed to this standard. The FF.33j also brought along refinements and held provision for communications gear. The FF.33l became the definitive fighting scout form with some 130 produced. These carried a fixed machine gun as armament. The FF.33e was a dual-control trainer offshoot.

The FF.39 was a refinement of the FF.33e model but finished with the Benz Bz.IV engine and fourteen were produced.

The FF.49b was a dedicated bomber form of the FF.49c and, again, reversed the crew positions. The observer's machine gun was deleted. Fifteen were produced. The FF.49c was an improved FF.39 with reinforced members, improved controlling and standard communications gear. The observer was given a trainable machine gun. Two-hundred of this mark were produced.

The FF.59a and FF.59b were one-off developmentals of the FF.39. The FF.59c had a modified tail unit and revised wing struts and wire bracing. The C.I became its own one-off of the FF.33l, a land-based version of the floatplane with a wheeled undercarriage installed.

Operators (beyond the German Empire) of the FF.33 series went on to include Bulgaria, Denmark, Finland, Netherlands, Poland and Sweden. Hungarian FF.33s operated until 1920, Polished versions until 1922 and Finnish FF.33s lasted into 1923.©MilitaryFactory.com
Note: The above text is EXCLUSIVE to the site www.MilitaryFactory.com. It is the product of many hours of research and work made possible with the help of contributors, veterans, insiders, and topic specialists. If you happen upon this text anywhere else on the internet or in print, please let us know at MilitaryFactory AT gmail DOT com so that we may take appropriate action against the offender / offending site and continue to protect this original work.
Advertisements

(Showcased performance specifications pertain to the base Friedrichshafen FF.33 production variant. Performance specifications showcased above are subject to environmental factors as well as aircraft configuration. Estimates are made when Real Data not available. Compare this aircraft entry against any other in our database or View aircraft by powerplant type)
OPTIONAL:
1 x 7.92mm LMG 08/15 machine gun, either in fixed, forward-firing mounting (synchronized to fire through the spinning propeller blades) or at the observer's rear-facing position on a trainable/flexible mounting. 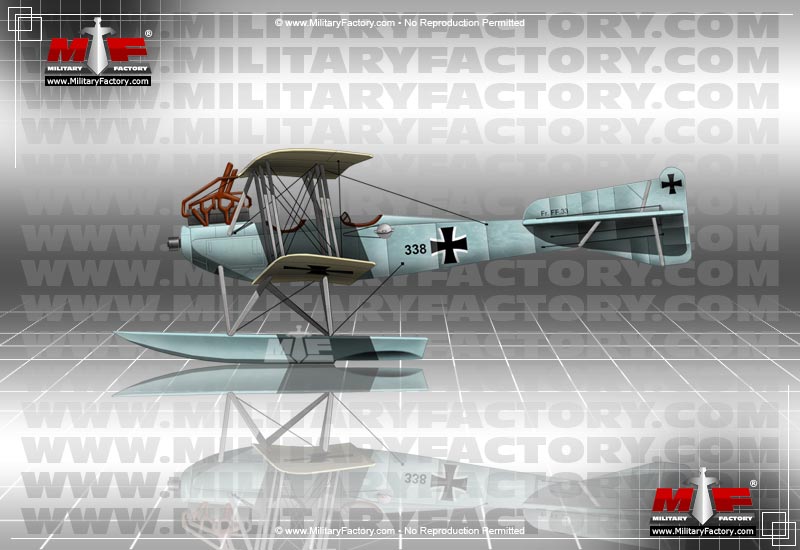