The Blackburn B.20 aircraft project held a unique, extendable boat-like hull for which to accomplish water landings with. 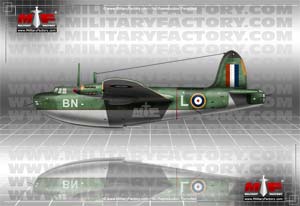 Britain's long-ranging coastline and free access to surrounding seas made it a priority for its military to field a fleet of capable flying boats in the post-World War 1/pre-World War 2 period. As technology allowed, these platforms became evermore advanced and a critical component to sea-based operations involving both the Royal Navy (RN) and the Royal Air Force (RAF). With the arrival of World War 2 in September of 1939, the fleet proved critical to the scope of both services, helping to stave off defeat and, in turn, helping to secure the ultimate victory of 1945.

Prior to the war in 1936, the RAF put together a new specification covering a compact reconnaissance-minded flying boat aircraft under Specification R.1/36. Flying boats provided two very key qualities in their design: offering excellent over-water range and excellent loitering times once on station. In addition to this, the type held a built-in functionality which allowed it to land and take-off from water - not requiring a prepared runaway to operate from. The one requirement authorities revealed was a minimum speed of 230 miles per hour.

Two companies returned with two very similar designs: Saunders-Roe delivered their "A.36" and Blackburn delivered their "B.20". The Blackburn offering was of particular note for it featured a retractable pontoon assembly built as part of the boat-like hull and this could be operated when landing or taking-off while then being "tucked in" for air travel and thus retaining aerodynamic efficiency.

This unique mechanical system was a solution to a soon-realized problem - protecting the engines from the spray of the salty sea when running along the water. Prior to this period of aviation history, the issue was contained by simply mounting engines atop the upper wing assembly of a biplane arranged aircraft. The shift to the monoplane as the new aircraft standard now meant that engines sat close to the ground, or in this case the water's surface. One option was to create a deep hull/fuselage to help elevate the engines but this reduced aerodynamic efficiency by generating additional drag.

Therefore, the Blackburn B.20 was an interesting response to this challenge and attempted to deal with the issue through a more complex, yet possibly practical, arrangement - retaining the monoplane wings and actively affecting the hull itself in-flight (as needed) instead.

The result was an aircraft that featured qualities more akin to a seaplane or floatplane than a true flying boat. The boat-like hull sat under the fuselage in the usual way but was only called into action when needed and outboard pontoons were used to steady the aircraft on the surface of the water (these also folded away when not in use). The wing mainplanes were mounted high along the sides of the upper fuselage section and the engines were fitted to each wing element near the wingroots. The heavily-framed flightdeck overlooked the nose in traditional fashion and gave the pilots excellent views of the engines installed at the wing leading edges to either side of the cockpit. The fuselage tapered nicely to the rear, the tail unit containing a single, rounded vertical fin and low-set horizontal planes.
Advertisements

The aircraft's design is attributed to John Douglas Rennie and a prototype went airborne for the first time on March 26th, 1940. However, that April, extreme aileron flutter forced the crew to bail out (three were killed in the action) and the aircraft was a ruled a total loss. Just a handful of test flights were completed with this vehicle, meant to test the validity of the retracting hull idea, and, apparently, RAF authorities had seen enough of the project to end its commitment to the B.20 after the final flight (as such no additional development work was taken up).

As designed, the B.20 carried 2 x Rolls-Royce Vulture X-type, 24-cylinder engines developing 1,720 horsepower each and these were used to drive three-bladed propellers in traditional "puller" fashion. Performance included a maximum speed of 305 miles per hour and a range out to 1,500 miles. Dimensions were a length of 69.7 feet, a wingspan of 82 feet and a height of 25 feet. MTOW was rated at 35,000lb. Armament was to be defensive in nature and made up of a mix of cannon and machine guns to include two powered turrets. The operating crew would have been six men.

In the end, a submission from Saunders-Roe, the A.36 "Lerwick", became the more successful of the two offerings but even this design was not an outright success and only twenty-one examples were acquired by the RAF (and some used by the Royal Canadian Air Force (RCAF)). The series gave a poor showing in practical wartime service as they were highly prone to accidents (indeed ten of the lot were lost in this fashion). With service introduction had in 1940, the line was retired as soon as 1942.

The Blackburn B.40 was drawn up as an improved, dimensionally larger, form of the B.20 and this was covered by Specification R.13/40 of 1940. In September of 1941, the RAF commissioned for a pair of B.40 prototypes to be developed but, after review, the type was not deemed worthy of additional work nor funding, leading to its uneventful end in December of that year. This aircraft was to carry 2 x Bristol Centaurus air-cooled radial piston engines and carry a mix of cannon and machine gun armament for defense. Dimensions included a wingspan of 98 feet and an MTOW of 52,000lb. The Short Sunderland ultimately took its place in service (detailed elsewhere on this site).
Advertisements 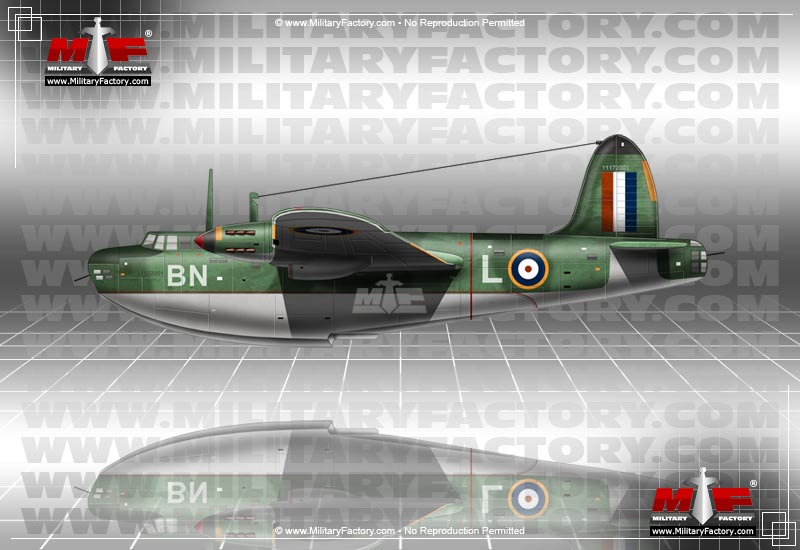