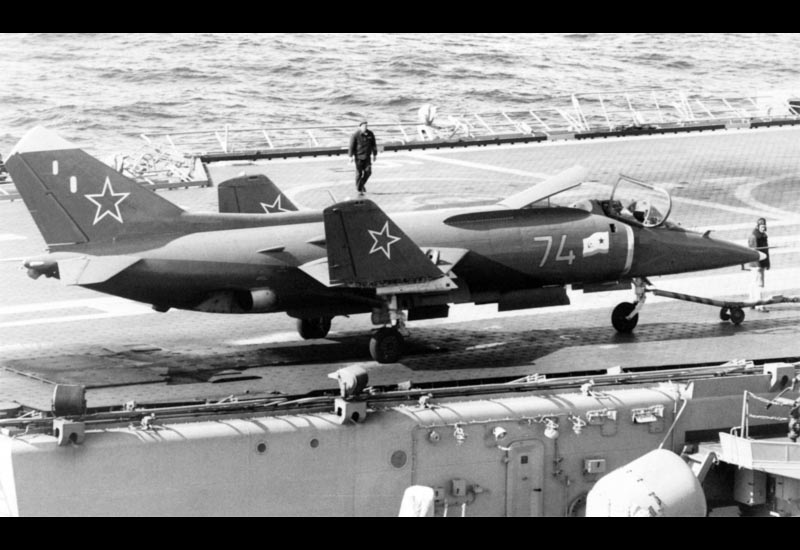 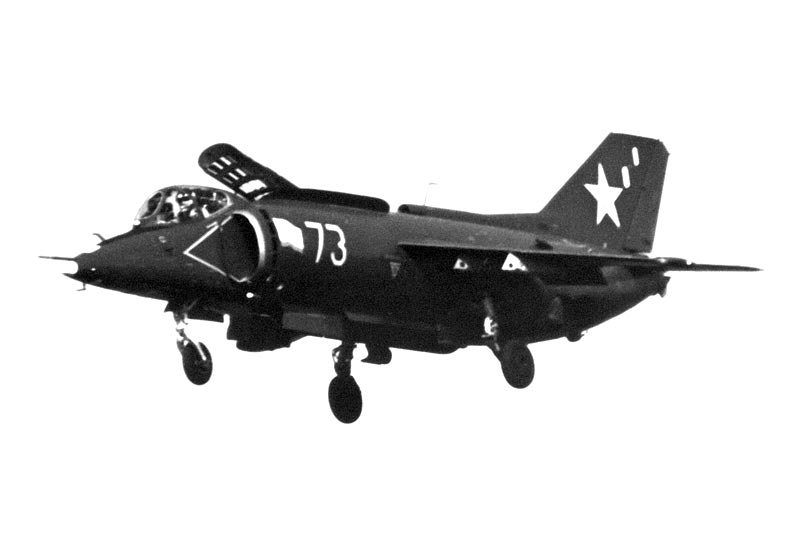 The Yakovlev Yak-38 Forger was something of the Soviet answer to the VTOL British Harrier jump jet of the West.

Authored By: Staff Writer | Last Edited: 04/29/2021 | Content ©www.MilitaryFactory.com | The following text is exclusive to this site.
The Yakovlev Yak-38 (NATO codename of "Forger") became the first (and last) VSTOL (Vertical, Short Take-Off and Landing) service aircraft for the Soviet Union. The vehicle attempted to fulfill roughly the same role as the competing British Aerospace "Harrier" series but proved a more limiting design that prevented the aircraft from reaching a greater operational service career. 231 examples were built in all across a few notable marks including a two-seat trainer-minded form. The line was officially retired from service in 1991 following the collapse of the Soviet Empire (1947-1991) and its shipborne role was not taken over by another product.

While the British were busy developing their Harrier jump jet, the Soviets endeavored to bring about their own VTOL system. Yakovlev began work on such a form in the 1960s, producing the Yak-104. When this initiative was abandoned, a new project emerged that eventually became the Yak-36. The Yak-36 "Freehand" ended its days as a test article through four prototypes but proved instrumental in producing the Yak-38's prototype - the "Yak-36M".

The Yak-36M actually held little in common with the earlier Yak-36 and featured a slimmer fuselage with shorter wing mainplanes. A single vertical tail surface was retained and downward-canted horizontal planes added. A split-air intake was used to aspirate the engine installations. Primary propulsion for forward flight was handled by a dedicated turbojet engine of considerable output power while two smaller, lower-powered turbojet units were used for lift-thrust and fitted vertically in a housing aft of the cockpit. The cockpit seated one and this was itself placed aft of a short nosecone. Intended for Soviet Navy service aboard the Kiev-class aircraft carriers, the finalized version of this aircraft was given the usual carrier-friendly qualities such as folding wings and a reinforced undercarriage. The undercarriage was of a retractable, tricycle design arrangement.

First flight of the Yak-38 prototype was recorded during early 1971. Take off and landing procedures were made fully-automated to help take some responsibility off of the pilot. The ejection seat was integrated to the lift engines for, should they fail and the aircraft begin to roll, the pilot was ejected "safely" away from the doomed aircraft. The computer-controlled engine system was designed to provide the proper mix of thrust to each lift unit to ensure that the aircraft stay aloft by way of precise calculations. In the end, Short Take-Off and Landings became more commonplace to the aircraft as opposed to relying on true vertical take-off and landing actions. The lift jets behind the pilot's seat were exposed during vertical flight while the primary engine's exhaust ports (seated under the aft-section of the aircraft) swiveled down to balance out lift power.

Armament was variable but restricted to gunpods, rocket pods, bombs, and missiles (the Yak-38 carried no internal gun). Four hardpoints were seen, two under each wing.
Yak-36M, marking what was essentially a pre-series example, carried a lower-powered engine of 14,660lb thrust and differed slightly from the production-quality aircraft. This work then led to the Yak-38 (NATO: "Forger-A") which became the first service aircraft joining the Soviet Navy ranks during August of 1976. These carried a 16,250lb thrust engine and total production yielded 143 units.

To help train Soviet naval pilots in the intricacies of VSTOL flight, the Forger was evolved into a dedicated two-seat training form in the Yak-38U (NATO: "Forger-B"). The fuselage was lengthened to accept the second cockpit and this model entered service on November 15th, 1978 with 38 examples following in production.

After some time in service, the Yak-38 family was modernized to produce the Yak-38M "Forger-A" designation. A Tumansky R-28 V-300 (vectored-thrust) and Rybinsk RD-38 engine combination replaced the original pairing for forward propulsion / lift thrust respectively. The added power increased the design's Maximum Take-Off Weight (MTOW) by over 2,000lb and this led to reinforced underwing hardpoints for greater carried war loads. The intake openings were revised for the new engine fit and the product came online in June 1985 and 50 examples followed.

There existed several unfulfilled Forger offshoots during its operational history as well: the Yak-36P was intended as a supersonic fighter and the Yak-38MP was to carry the advanced navigation and attack suite of the Mikoyan MiG-29 "Fulcrum" fighter series. The Yak-39 was projected as a multirole platform but joined the others in Soviet aviation history as abandoned projects.

The Yak-38 encountered only extremely limited combat exposure during the Soviet-Afghanistan War of the 1980s.Twelve sorties were made with no notable actions recorded. The Yak-38 series, as a whole, suffered from inherently limited operational ranges, limited performance, and a limited weapons-carrying capability to make it effective in any one role. Nevertheless, it still offered sound fleet defense service for its time on Soviet carriers as it could carry useful Air-to-Air Missiles (AAMs).

With the Yak-38 line officially retired in 1991-1992, attempts to replace the series in the carrier-based VTOL role through the Tak-41 "Freestyle" and Yak-43 initiatives were unsuccessful - allowing the Yak-38 to keep its place in Soviet naval aviation history for the foreseeable future.

Soviet Union (retired)
(OPERATORS list includes past, present, and future operators when applicable)
✓ Air-to-Air Combat, Fighter
General ability to actively engage other aircraft of similar form and function, typically through guns, missiles, and/or aerial rockets. ✓ Ground Attack (Bombing, Strafing)
Ability to conduct aerial bombing of ground targets by way of (but not limited to) guns, bombs, missiles, rockets, and the like. ✓ Close-Air Support (CAS)
Developed to operate in close proximity to active ground elements by way of a broad array of air-to-ground ordnance and munitions options. ✓ Maritime / Navy
Land-based or shipborne capability for operating over-water in various maritime-related roles while supported by allied naval surface elements. ✓ Training (General)
Developed ability to be used as a dedicated trainer for student pilots (typically under the supervision of an instructor).

(Showcased performance specifications pertain to the Yakovlev Yak-38 (Forger-A) production variant. Compare this aircraft entry against any other in our database. View aircraft by powerplant type)
Up to 4,400 lb of externally-mounted ordnance across four underwing hardpoints with support for the following:

Aviation developments of similar form and function, or related to, the Yakovlev Yak-38 (Forger)...