The Eurocopter AS550 Fennec series has found a home in the inventories of many military forces around the globe.

Authored By: Staff Writer | Last Edited: 09/20/2022 | Content ©www.MilitaryFactory.com | The following text is exclusive to this site. 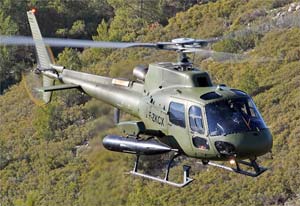 The AS550 "Fennec" (H125) is a related militarized helicopter development of the Eurocopter AS350 "Ecureuil" series. It is a light-class, versatile dedicated utility platform intended for such roles as reconnaissance, transport and attack sorties (as well as special forces support) and has seen considerable popularity around the globe. Introduced in 1990, the Fennec was developed into two distinct flavors: the single-engined AS350 and AS550 family and the twin-engined AS355 and AS555 family. Original production forms were the single-engine AS350 L1/L2 "Ecureuil" and service introduction occurred in 1990.

The Fennec was originally a product of Aerospatiale (AS) before falling under the Eurocopter name. It is now a product of Airbus Helicopters and known under the "H125" designation and marketed as such.

Outwardly, the helicopter relies on a conventional design layout with the powerplant fitted over the roof of the passenger cabin and used to drive an overhead main rotor as well as a tail rotor (the latter via a drive shaft running through the tail stem). The engine exhausts over the tail unit. The tail unit is completed with vertical planes at its extreme aft end and horizontal planes along the midway span of the empennage. At front is side-by-side seating for two crew while the passenger cabin can contain up to four passengers. The frontal section of the aircraft is well-glazed for excellent vision out-of-the-cockpit. Each pilot is afforded hinged automobile-style doors. The passenger section is also home to hinged door units though these are of larger area. The chin area can support an optics fit. The undercarriage is of a simple four-point skid arrangement reducing maintenance time and procurement costs.

The AS550 CS sports a crew of two with seating for four. It has an overall length of 42.5 feet with a width of 35 feet (main rotor included) and a height of 10.9 feet. Listed empty weight is 2,700lb against a Maximum Take-Off Weight of 5,000lb. Power is from a single Turbomeca Arriel 2B turboshaft engine developing 847 horsepower driving a three-bladed main rotor over the fuselage and a two-bladed tail rotor at rear (offset to starboard). Performance includes a maximum speed of 155 miles per hour with a range out to 405 miles, a service ceiling up to 17,320 feet and a rate-of-climb of 2,030 feet-per-minute.

May 2018 - Ukraine has inked a deal for a batch of H125 helicopters from Airbus.©MilitaryFactory.com
Note: The above text is EXCLUSIVE to the site www.MilitaryFactory.com. It is the product of many hours of research and work made possible with the help of contributors, veterans, insiders, and topic specialists. If you happen upon this text anywhere else on the internet or in print, please let us know at MilitaryFactory AT gmail DOT com so that we may take appropriate action against the offender / offending site and continue to protect this original work.

September 2022 - The Air Force and Navy services of Brazil have jointly signed a deal to acquire 27 H125 helicopters for training purposes. 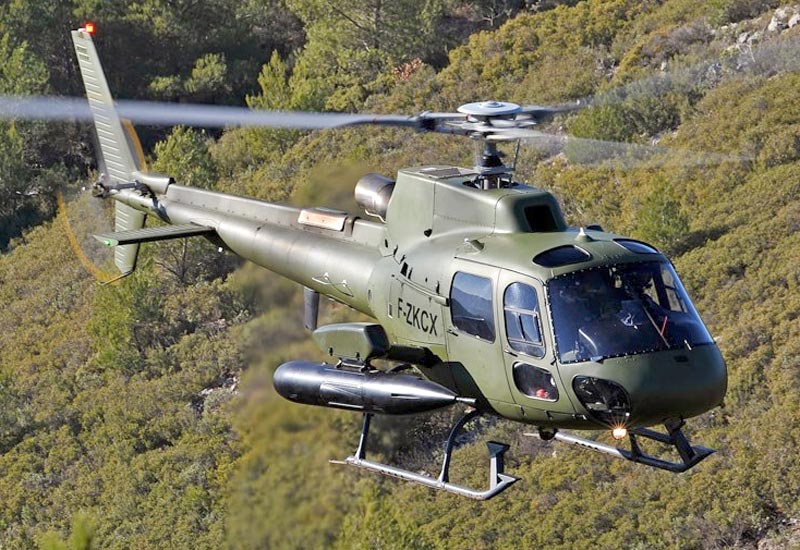