The Bell P-59 Airacomet jet-powered fighter was not an outright success but it helped to lay the foundation for future American jet projects that followed.

Authored By: Staff Writer | Last Edited: 07/17/2019 | Content ©www.MilitaryFactory.com | The following text is exclusive to this site. 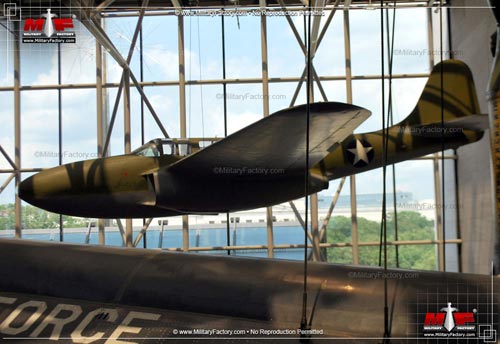 The Bell P-59 "Airacobra" became the first viable military jet-powered aircraft for the United States when it took to the skies in October of 1942. However, its inherent design limitations restricted the product to nothing more than an important test platform and critical training aircraft teaching future generations of American airmen the nuances of jet-powered flight. In the end, the P-59 stood as nothing more than a technological stepping point to more advanced research and operational-level projects still to come and paved the way for the likes of such creations as the Lockheed P-80 "Shooting Star" - America's first mass-produced jet fighter.

The development of the turbojet originated from multiple sources before it was to become a proven powerplant concerning military aircraft. In Britain, Royal Air Force officer Frank Whittle was convinced of its merits as early as the 1920s and filed a patent for his creation in 1930. Little interest within the British military and industrial ranks meant that his idea lay dormant until a pair of ex-RAF colleagues provided funding for the venture in 1936. At the same time, German engineers were hard at work on their own, separate turbojet design culminating in the first flight of a jet-powered aircraft on August 27th, 1939 - this attributed to the history-making Heinkel He 178 (detailed elsewhere on this site). The British followed on May 15th, 1941 at which point World War 2 (1939-1945) was in full swing.

Before the World War arrived, even American military minds and industry were lukewarm to the idea of jet-powered military platforms - they believing it as something more of science fiction than a tangible solution. With reports emerging from Britain and Germany on advancements made in the field, the American government finally took interest and sent a detachment to England during April of 1941. U.S. General Hap Arnold himself witnessed the British Gloster E.28/39 jet aircraft conduct a series of successful hops and was convinced that "aircraft flying without propellers" was the wave of the future. This led to the two nations - now Allies in the war effort against German - to sign a formal technology agreement in September 1941 to further jet-powered flight equally - the British would supply the original Whittle design work and the Americans were to provide their industry know-how in bringing the engine to mass production. The Whittle turbojet plans were passed on to General Electric to be built in fifteen examples. This would coincide with three test aircraft being designed and built to house the new engines.

For the airframe the charge of its design fell to Bell Aircraft who did not have the fighter production commitments that its rivals had at the time. It also proved itself earlier, to the United States Army Air Forces (USAAF), that it was a forward-thinking aircraft manufacturer through such designs as the P-39 "Aircobra" (with its rear-mounted engine installation and tricycle undercarriage) and the wholly-unique and utterly ambitious YFM-1 "Airacuda" bomber destroyer. While both were inherently limited designs - the Airacobra found modest success in the hands of Soviet pilots via Lend-Lease and the Airacuda - introduced in 1940 - saw only thirteen of its kind built and was retired as early as 1942 - the company was ready to meet the demands of the new project. It had also completed a new facility in New York within reach of the General Electric plant intended to develop the Whittle engine.

A veil of absolute secrecy was established between the USAAF, Bell, and General Electric to the point that the fighter was given a prop-minded designation - "XP-59". Similarly, the engine carried the designation of "Type I-A" to showcase it as nothing more than a General Electric turbosupercharger. Expediency was the call of the day and, within two weeks, the small group of engineers working out of an abandoned factory returned with a scale model of the new fighter. It was based on an original prop-driven, twin-boom design relying on a "pusher" arrangement that company engineers had penciled before the XP-59 program was envisioned (the smaller XP-52). The aircraft was assigned the internal company designation of "Model 27" and an in-house Bell competition settled on the name "Airacomet" in keeping with the company's traditional "Aira-" naming convention.

The Whittle engine made its way - again under secrecy - to the United States from Britain in the hold of a Consolidated B-24 "Liberator" heavy bomber. The included plans were deemed very basic and General Electric engineers were given the green-light to modify it as seen fit. The engine ran for the first time on March 18th, 1942 and outputted 1,250lb of thrust. Lingering issues allowed time for Frank Whittle to journey to the United States and offer his support in streamlining the turbojet.

Because of the secrecy surrounding the new fighter, the design team had to work within a restricted environment and this produced a rather conventional overall design for the new fighter complete with straight wing mainplanes and a traditional tail unit (single rudder, low-mounted stabilizers). The aircraft sat low to the ground and held its pilot ahead of midships under a heavily-framed canopy with limited vision out of the cockpit. The nose section was cleared to accept the entire armament suite - originally comprising 2 x 37mm cannons but later revised to 1 x 37mm cannons with 3 x 0.50 caliber heavy machine guns. The one Bell constant used in the Xp-59 was the tricycle undercarriage which offered the only modern external quality. The engines were fitted in the wing roots, essentially underslung along the wing mainplanes and separated by the slim fuselage. The engine nacelles featured rounded-rectangular intakes for aspirating the turbojets within and exhausted aft of the wing tailing edges. Overall construction of the aircraft was largely metal with some control surfaces completed in fabric - this was later changed to all-metal as well. By and large, the XP-59 broke little ground in terms of fighter design - it was as basic as possible to house the engines and fly within the specified amount of time.
Advertisements

It was decided to test the new aircraft over the USAAF's Muroc dry lake bed of California's Mojave Desert to help keep the secret aircraft away from prying eyes and a prototype XP-59A arrived there in September of 1942. It recorded its first flight on October 1st, 1942 and, the following day, registered a ceiling of 10,000 feet. Two more prototypes joined the program in early 1943 and the first example of this group was modified with a second "cockpit" for an observer.

From this promising start came a second batch of thirteen aircraft under the developmental "YP-59A" designation. A YP-59A completed its first flight during August of 1943 and, in time, the product showed speeds nearing 400 miles per hour at altitudes of 35,000 feet. A wet spring for the dry lake bed postponed testing and forced the entire program to relocate to nearby Victorville AAFB. Its proximity to civilian areas meant that the in-development aircraft was to be covered over in canvas and fitted with fake propellers at their noses to keep the ruse alive. In April, the testing was shifted back to Muroc as the lake bed went dry.

The YP-59As early showing was less than stellar even against piston-powered, prop-driven contemporaries like the Republic P-47 Thunderbolt and it became clear through this head-to-head testing that the Bell product would soon reach its technological apex - becoming nothing more than a test and training platform for the USAAF. As such the title of "first mass-produced jet fighter in American history" would be claimed by the Lockheed P-80 detailed elsewhere on this site. The Bell program, up to this point, involved three prototype XP-59A models along with six developmental YP-59A examples - all flyable - and recorded over 240 hours in the air providing piles of data concerning jet-powered flight.

Originally 300 production-quality P-59A fighters were on order but the program's limitations soon saw the total reduced to 100 - due in large part to the limited availability of the all-important I-16 turbojet and Bell's internal wartime commitment to the new P-63 "King Cobra" fighter destined for the Soviets via Lend-Lease. A formal P-59 production order was handed down on March 11th, 1944 but the development program suffered a drawdown nonetheless.

The YP-59A continued in testing and data collection for a time longer and the original three XP-59A prototypes were brought up to the improved YP-59A standard. Some additional, albeit slight, changes were enacted to the design by Bell engineers and wing fuel tanks begat the "P-59B-1" designation. The order for Bell to cease production on their P-59 was handed down on October 10th, 1944 - which would have resulted in just 39 production aircraft. Bell pushed for, and won, an argument to continue production into the 50th example resulting in batches of twenty P-59A models and thirty P-59B models being completed before August of 1945.

Production-quality P-59s ended their days as trainers while some sat engine-less in storage until ultimately scrapped. After the 412th Fighter Group's training squadron was disbanded in 1946, the P-59 slipped into aviation history - none were flying by 1950. Those that were not scrapped or run into the ground during testing became protected museum showpieces.

In total, production of P-59 aircraft reached sixty-six. One was passed on to the British in exchange for their impressive Gloster Meteor (Mk I) fighter. As completed, the P-59A exhibited a maximum speed of 389 miles per hour, a cruise speed of 280 miles per hour, a service ceiling up to 40,000 feet, a rate-of-climb of 1,200 feet-per-minute, and a range out to 520 miles.
Advertisements

(Showcased performance specifications pertain to the Bell P-59A production variant. Compare this aircraft entry against any other in our database or View aircraft by powerplant type)
ORIGINAL (Proposed):
2 x 37mm automatic cannons in nose assembly. 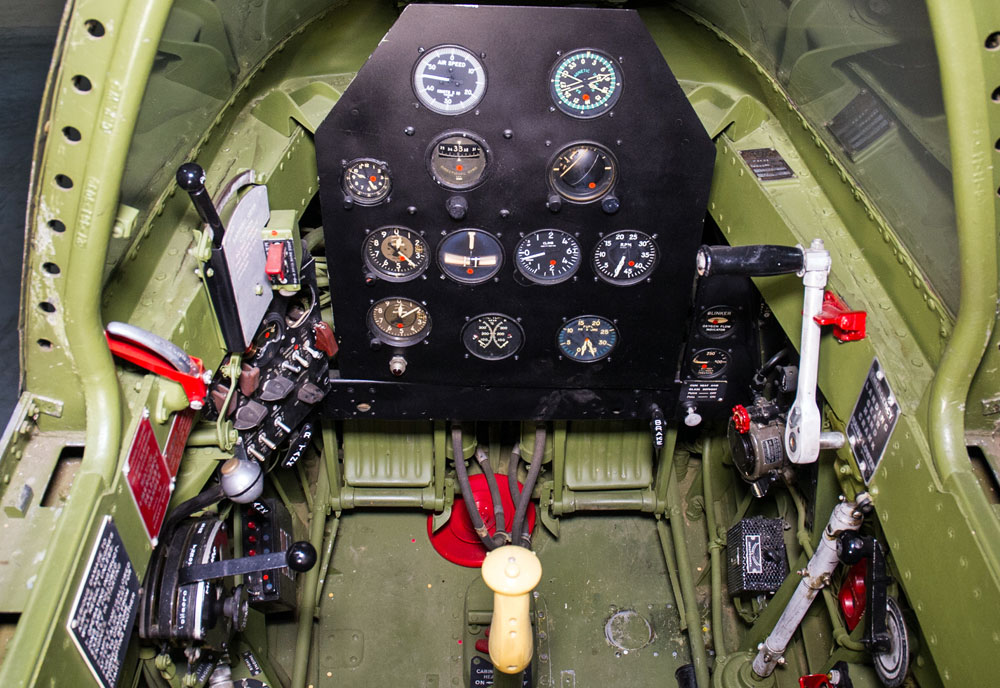 General Assessment
Firepower
Performance
Survivability
Versatility
Impact
Values are derrived from a variety of categories related to the design, overall function, and historical influence of this aircraft in aviation history.
Overall Rating
The overall rating takes into account over 60 individual factors related to this aircraft entry.
40
Rating is out of a possible 100 points.
Relative Maximum Speed
Hi: 400mph
Lo: 200mph
This entry's maximum listed speed (389mph). 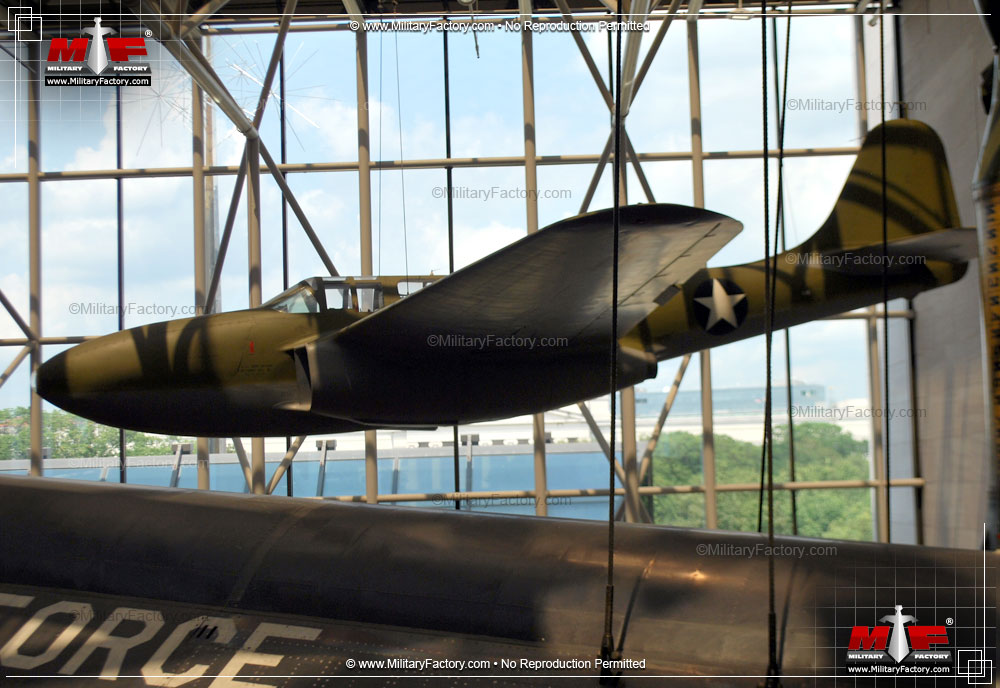 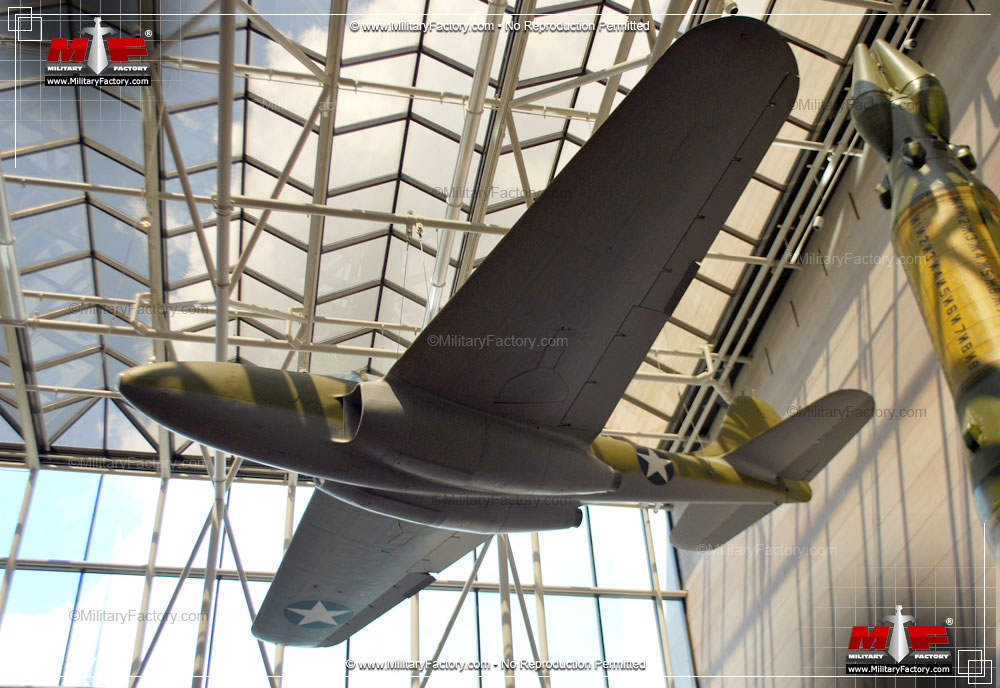 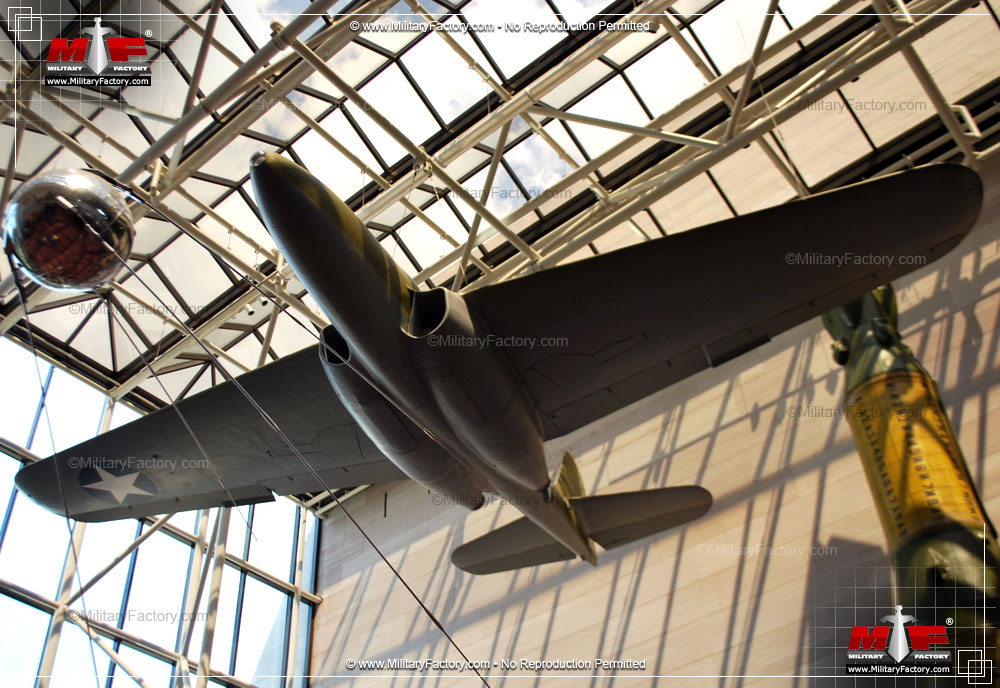 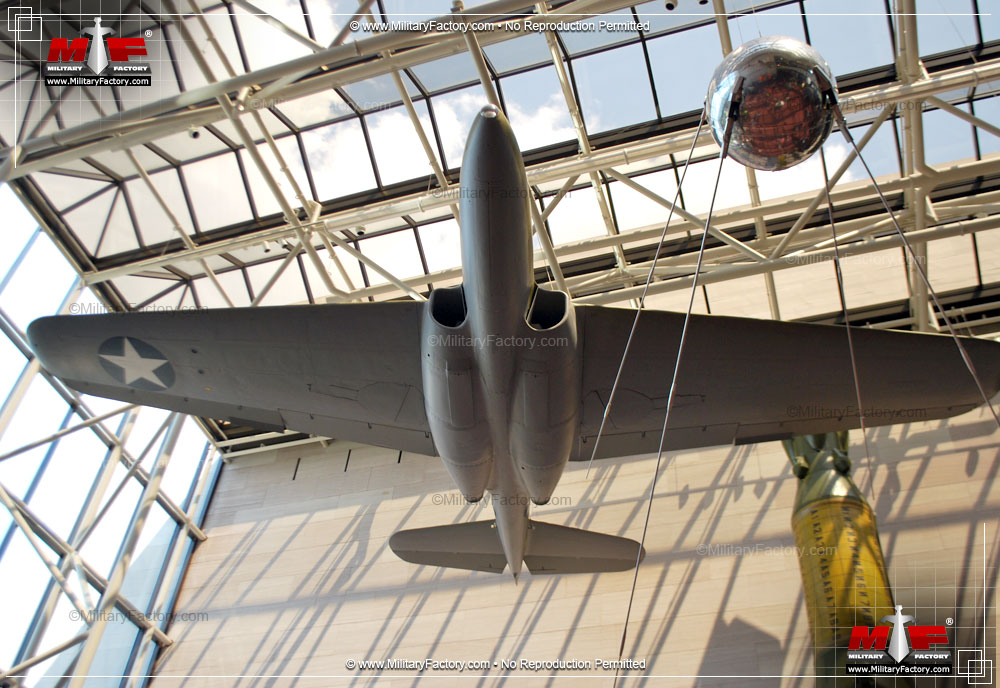 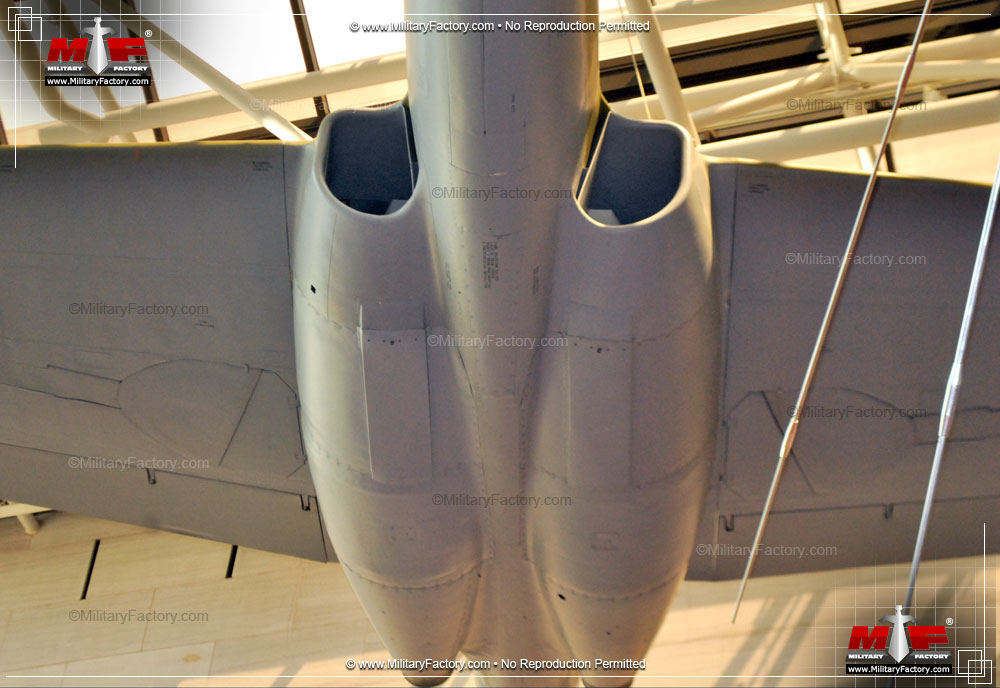 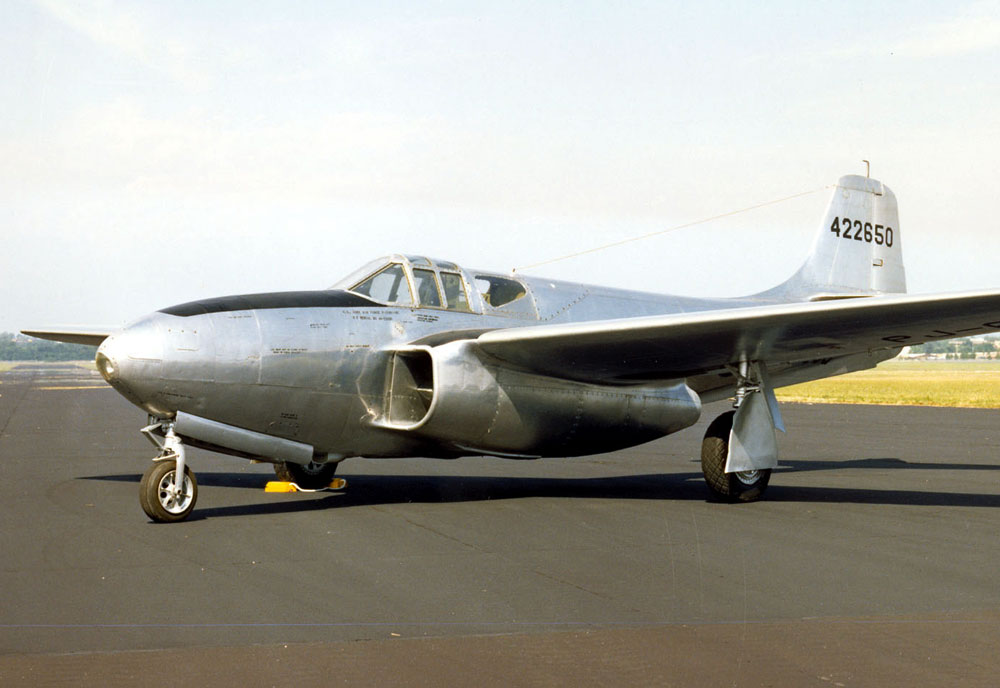 Image from the National Museum of the United States Air Force, Dayton, Ohio.
7 / 8 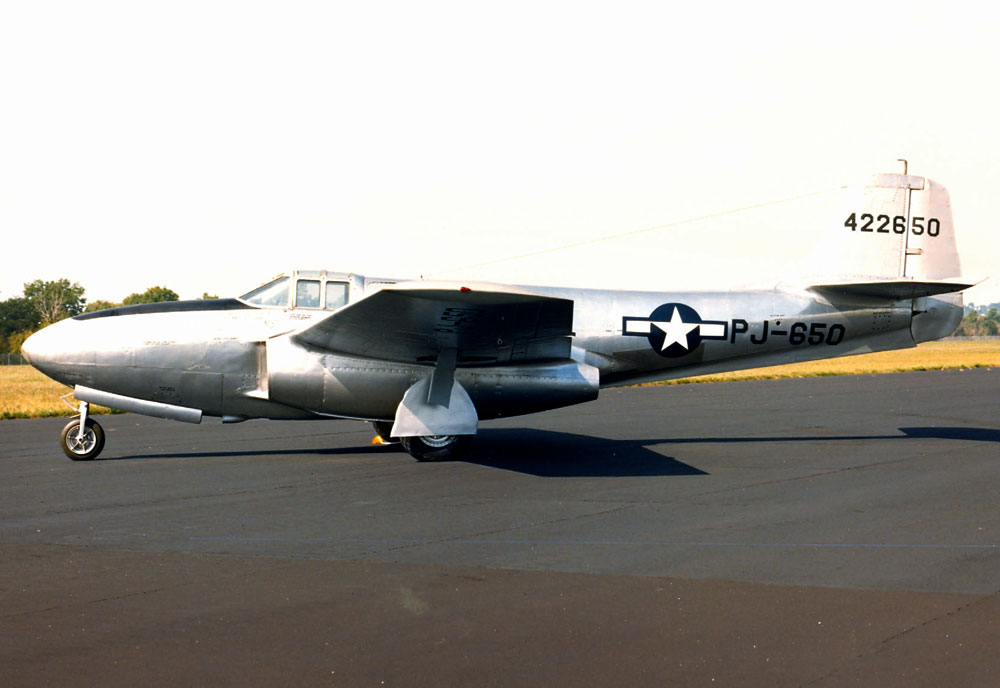 Image from the National Museum of the United States Air Force, Dayton, Ohio.
8 / 8 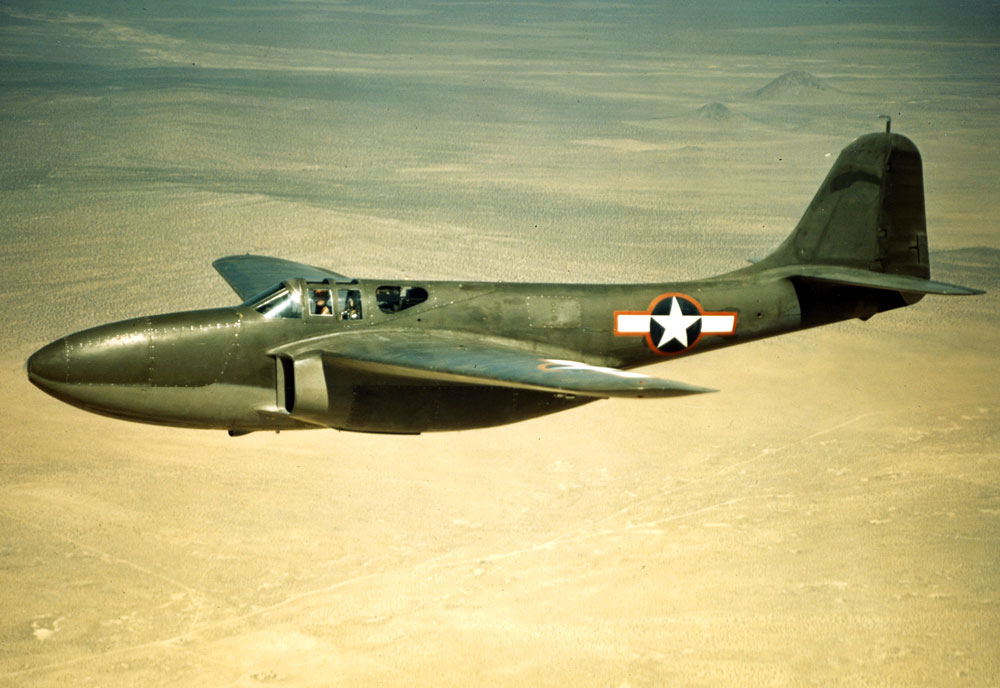