Just one prototype was built of the Caproni Vizzola F.4 fighter - it was equipped with the German DB601 series inline engine.

Authored By: Staff Writer | Last Edited: 06/08/2018 | Content ©www.MilitaryFactory.com | The following text is exclusive to this site.

In the run-up to World War 2 (1939-1945), during the latter part of 1937, the Italian aero-concern of Caproni went to work on a new, all-modern low-wing, single-seat / single-engine monoplane fighter. The engineering team was led by F. Fabrizi and this endeavor ultimately yielded two similar fighting aircraft in prototype form - the Caproni-Vizzola "F.4" and "F.5" - which began a new fighter line that culminated with the "F.6". None of these aircraft achieved much during their time aloft, becoming nothing more than footnotes in Italian military aviation history.

The F.4, the focus of this article, was completed by a traditional mixed construction process in which both wood and metal played a major part in its makeup. A welded steel tube framework made up the support structure surrounding the internals. The cockpit seated one and was fully-enclosed at midships. The engine was fitted to the nose ahead of the cockpit in the usual way and drove a three-bladed propeller unit in puller fashion. The tail unit had a single vertical fin with low-set horizontal planes. The wing mainplanes, made of wood, were set low against the fuselage sides and were slim and rounded in their general appearance. For ground-running, a typical tail-dragger undercarriage was used (wholly retractable). The aircraft was skinned over in plywood at the wings and duralumin at the fuselage with flushed rivets used for an inherent aerodynamic quality.

It was planned that the new F.4 would carry a indigenous Isotta-Fraschini "Asso" 121 R.C.40 series liquid-cooled, 12-cylinder inline piston engine of 960 horsepower output. However, the Regia Aeronautica's preference for another engine type for its fleet of fighters forced the F.4 to sit idle for the time being as attention was passed to the radial-powered F.5 instead.

The fortunes for the F.4 changed some when, in the summer of 1939, the Kingdom of Italy's relationship with the Germans paid off and Daimler-Benz DB601A inline engines were becoming available in number to the German wartime ally. With Italian authority approval, this engine was fitted into the final pre-production form of the F.5 series to beget what would essentially become the prototype F.4. This then led to a first-flight recorded in July of 1940 - by which point World War 2 (1939-1945) was already in full swing and the Italian commitment ever-growing. The engine was to be licensed-produced locally by Alfa-Romeo when the time came.

As a combat fighter platform, the F.4 would be modestly armed by standards of the period - proposed armament was nothing more than a pair of 12.7mm Breda-SAFAT machine guns in fixed, forward-firing mounts.

Plans were underway to produce the new fighter as the "F.5bis" but the arrival of the Daimler-Benz DB605 series inlines, and steps taken to fit these more powerful engines to the newer "F.6" fighter, meant that the F.4 had no foreseeable future in the Regia Aeronautica. As such, it was relegated to testing for the remainder of its service life, this with 303 Squadriglia, and its days came to an abrupt end during 1942.

As tested, the aircraft could reach a maximum speed of 342 miles per hour through cruising was closer to 305 miles per hour. Range was out to 435 miles and its service ceiling reached 32,800 feet.

The F.5 fared a little better with several prototypes and twelve preproduction units completed. The F.6 faced development difficulties and delays itself and was tested into August of 1943. However, the Italians capitulated that September, brining about the final end for this Fabrizi fighter line.©MilitaryFactory.com
Note: The above text is EXCLUSIVE to the site www.MilitaryFactory.com. It is the product of many hours of research and work made possible with the help of contributors, veterans, insiders, and topic specialists. If you happen upon this text anywhere else on the internet or in print, please let us know at MilitaryFactory AT gmail DOT com so that we may take appropriate action against the offender / offending site and continue to protect this original work.
Advertisements

(Showcased performance specifications pertain to the base Caproni Vizzola F.4 production variant. Compare this aircraft entry against any other in our database or View aircraft by powerplant type)
PROPOSED:
2 x 12.7mm Breda-SAFAT machine guns.

General Assessment
Firepower
Performance
Survivability
Versatility
Impact
Values are derrived from a variety of categories related to the design, overall function, and historical influence of this aircraft in aviation history.
Overall Rating
The overall rating takes into account over 60 individual factors related to this aircraft entry.
22
Rating is out of a possible 100 points.
Relative Maximum Speed
Hi: 400mph
Lo: 200mph
This entry's maximum listed speed (342mph). 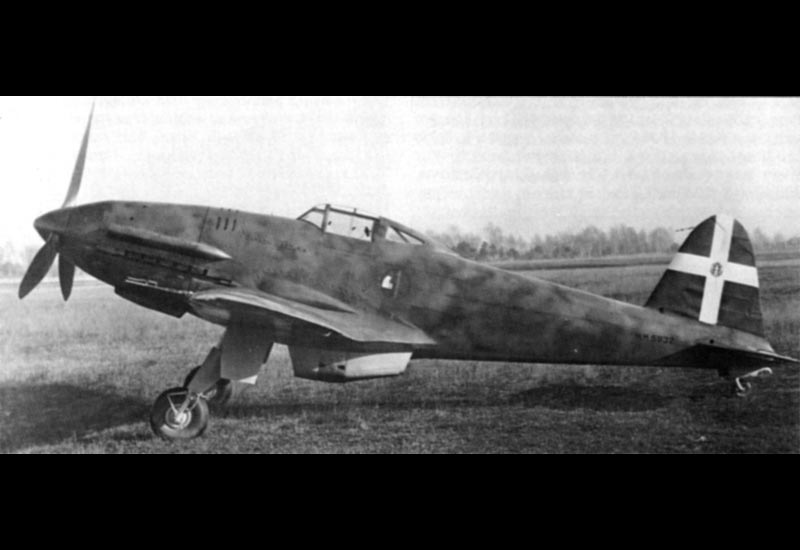