The Jet Mosquito was a proposed jet-conversion offshoot of the classic de Havilland DH.98 Mosquito fighter-bomber line- it came to nothing.

Authored By: Staff Writer | Last Edited: 04/25/2019 | Content ©www.MilitaryFactory.com | The following text is exclusive to this site. 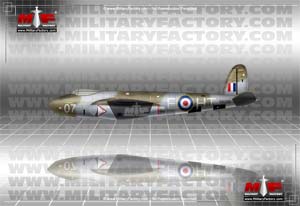 The "Jet Mosquito" was a briefly-entertained conversion project of the classic de Havilland DH.98 "Mosquito" series fighter-bomber (detailed elsewhere on this site). The Mosquito excelled in various roles during World War 2 (1939-1945) and was produced in the thousands during, and after, the conflict. Its success only opened the aircraft to various proposed production types by the company, such was the over-battlefield potency of "The Wooden Wonder".

As the name suggests, the Jet Mosquito was to become a jet-powered development of the classic DH.98 offering. The airframe would have retained much of the form and function of the original save for slightly swept-back wing mainplanes. The original propeller-driven engines naturally gave way to underwing nacelles housing turbojet engines. The crew resided under a bubble-style canopy offering excellent forward vision. The tail unit would have incorporated a single vertical tail fin and low-set horizontal planes. A tail-dragger undercarriage arrangement was to be standard for ground-running.

Power was derived from 2 x de Havilland Halford H-1 (evolving into the "Goblin") series turbojet engines to which a maximum speed of 445 miles per hour was estimated. The Goblin powerplant went on to power several notable aircraft such as the Gloster Meteor and de Havilland Vampire aircraft. An internal bomb load of up to 2,000lb was projected.

The design, with paperwork appearing as early as mid-1942, did not progress beyond a few known drawings.

Some specifications on this page are estimated on the part of the author.
Advertisements

(Showcased performance specifications pertain to the base de Havilland Jet Mosquito production variant. Compare this aircraft entry against any other in our database or View aircraft by powerplant type)
ESTIMATED:
Up to 2,000lb of conventional drop stores. Assumed cannon armament as well, probably 4 x 20mm automatic guns in the nose assembly. 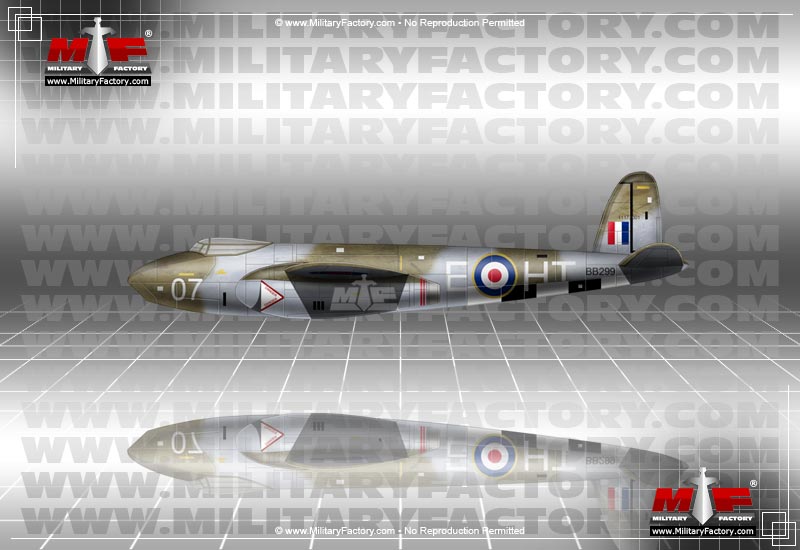