The KUS-VJ is a unmanned rotary-wing gunship platform based on the MD500 and being proposed by Korean Air with technical assistance from Boeing. 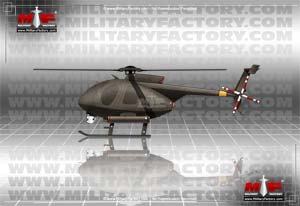 The rise of unmanned attack aircraft over the battlefield is quite apparent to even the casual observer and Korean Air (Korean Aerospace Industries - KAI) of South Korea, along with U.S.-based Boeing, have agreed to jointly develop an unmanned, attack-minded version of the successful MD500 series light helicopter. With a large stock of aging MD500 units available to the South Korean Air Force, the project would see conversions of these systems to an unmanned model - designated "KUS-VH". A full-sized mock-up of the proposed product was seen at Seoul Aerospace & Defence Exhibition 2015.

Without the need of a pilot the helicopter will now see a reduced operational commitment over the battlescape. The passenger cabin is to be taken up by a large internal fuel tank increasing the operational range of the helicopter by 100%. The windscreen surfaces common to the MD500 will be shrouded over. By and large the overall form and function of the unit will remain intact. Optcis will be set in a fairing under the chin. Korean Air also markets the development under a low-cost approach to a comparable manned system of equal capabilities. Armament options will include rocket pods, gun pods and missiles which, when coupled to onboard systems, will provide a surgical strike capability with no potential pilot loss in enemy-held territory.

While the South Korean Air Force is not actively looking for a product like the KUS-VH, the possible reuse of the aging stock of MD500 helicopters might be tempting enough for the service to have a serious look. The MD500s currently in service will be retired over the next decade and number several hundred.

The Boeing participation in the program is key not only due to the company's position as a global defense powerhouse but also with its recent experience in developing its own H-6U "Little Bird" unmanned helicopter (detailed elsewhere on this site). The KUH-VH will be offered for export to American and South Korean allies.

(Showcased performance specifications pertain to the base KAI / Boeing KUS-VJ production variant. Compare this aircraft entry against any other in our database or View aircraft by powerplant type)
Variable - ordnance held across two wingstubs along fuselage sides and can include (in pairs of in single installation): 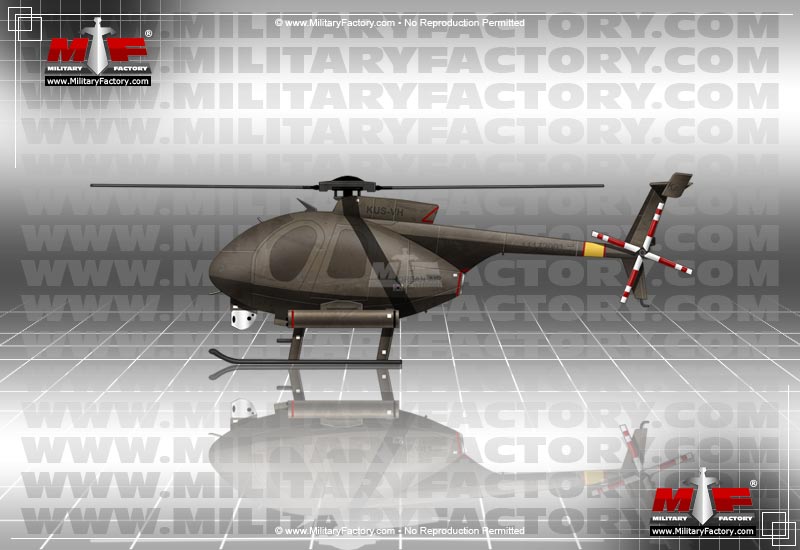