Authored By: Dan Alex | Last Edited: 06/09/2022 | Content ©www.MilitaryFactory.com | The following text is exclusive to this site. 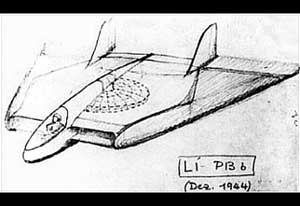 The Lippisch P.13B was one of two related delta-winged, tailless aircraft designs brought along by German aeronautical engineer Alexander Lippisch. The earlier P-13A was one of the more unique aircraft entries in the whole of the war, utilizing a triangular shape which seated the pilot in a cockpit located within the base of the tail fin. Operating on a coal-burning, ramjet powerplant arrangement aspirated through the "nose" of the aircraft, the P.13A existed as nothing more than a design study. Similarly, the P.13B followed suit and it appears to never have advanced beyond the drawing board.

Germany's situation turned for the worse during 1943-1944 and deteriorated to the point that the availability of war-making resources were putting an ever-greater stranglehold on its fighting capacity. As such, any new developments were carefully examined by authorities in that they should hold some immediate military-minded value. Lippisch understood this from his time on the Messerschmitt Me 163 "Komet" rocket-powered interceptor project and used this to further the P.13A and P.13B designs. By the time of the P.13B, the status quo remained the same - develop the aircraft under the guise of delivering to the Luftwaffe a viable, war-winning production-friendly fighter.

Drawing from his experience on the earlier DM-1 (a powerless research glider) and P.13A models, the P.13B progressed with a delta-wing planform - though revised to force a more traditional, and conventional, placement of the single-seat cockpit along a defined nose section. A twin-rudder configuration was used to provide for greater stability in high-speed flight envelopes and these extended aft from the delta-wing's trailing edges. The P.13B was also to carry an unconventional undercarriage - a steerable, wheeled nose leg supporting the frontal section of the aircraft with wingtip-mounted skids set to support the rear section - perhaps to play along with the idea that the P.13B would operate from unprepared airfields. Dimensions of the aircraft included a wingspan of 6.9 meters, a length of 7.2 meters and a height of 1.5 meters. Proposed armament was 2 x 30mm MK 108 cannons.

The coal-burning ramjet power source of the P.13A was retained but reworked in the P.13B to include a cylindrical "basket" holding the soft brown coal supply. This basket was suspended within the engine duct work and located internally at the center mass of the aircraft. The basket was designed to rotate at up to sixty revolutions per minute to produce the needed thrust output. A liquid-fueled gas flame would provide the required combustion source. Aspiration was through a pair of rectangular intakes flanking the cockpit with the exhaust port becoming a long rectangular opening at the rear of the aircraft - nestled between the two tail fins. A Kornach "Lorin" ramjet engine would be the primary method of propulsion but its ramjet design meant that it would need an additional power source to bring the aircraft to speed - the ramjet would take over after 150 miles per hour. Rocket boosters would most likely have been used to provide the initial take-off thrust.

Beyond these details there is little official evidence supporting any further progress of the P.13B design (some drawings were made depicting the aircraft in perspective as well as the internal placement of the coal basket). Regardless this Luftwaffe project was still some years away from witnessing any actual fruit and the stresses of war did little to help the program progress much. It inevitably became one of the many German "paper airplanes" to emerge from the fighting of World War 2.

Performance specifications listed on this page are estimates on the part of the author.©MilitaryFactory.com
Note: The above text is EXCLUSIVE to the site www.MilitaryFactory.com. It is the product of many hours of research and work made possible with the help of contributors, veterans, insiders, and topic specialists. If you happen upon this text anywhere else on the internet or in print, please let us know at MilitaryFactory AT gmail DOT com so that we may take appropriate action against the offender / offending site and continue to protect this original work.
Advertisements

(Showcased performance specifications pertain to the base Lippisch P.13B production variant. Performance specifications showcased above are subject to environmental factors as well as aircraft configuration. Estimates are made when Real Data not available. Compare this aircraft entry against any other in our database or View aircraft by powerplant type)
PROPOSED:
2 x 30mm MK 108 internal automatic cannons. 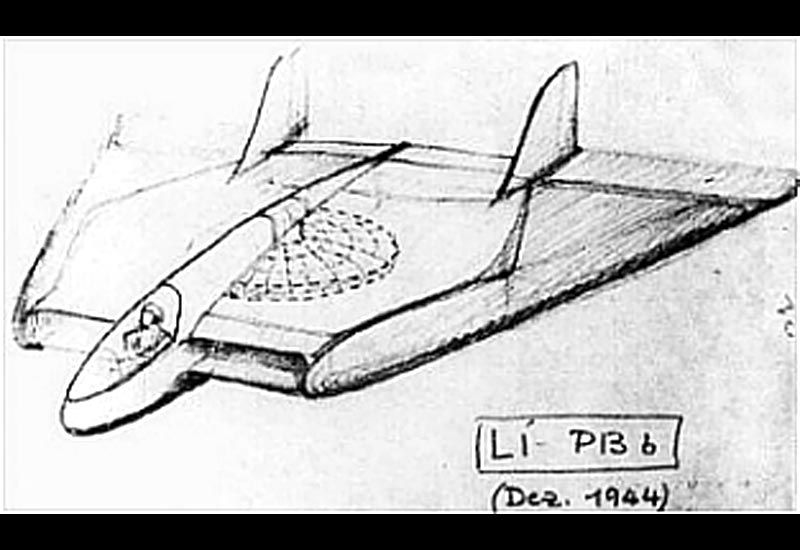