The Saab B18 twin-engine medium bomber was a local solution for the Swedish Air Force born during of the fighting of World War 2. 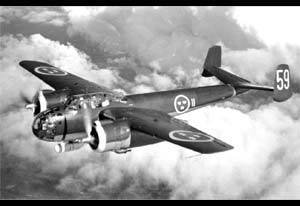 The nation of Sweden maintained a neutral stance during World War 2 (1939-1945) but was not blind to the worsening situation along their borders and elsewhere. This spurred development of several homegrown weapons that ultimately included both tanks and combat aircraft. Prior to the war, the Swedish Air Force managed a stock of German Junkers Ju 86 aircraft for its general fast reconnaissance role but, by the time of the war, the product was made obsolete by newer designs appearing elsewhere. As such, a replacement was sought which became the Saab B18, a three-seat, twin-engine aircraft introduced during 1944.

Competing designs to fulfill the requirement were reviewed before Saab was granted the development contract. The arrival of World War 2 in September of 1939 delayed work on the B18 as resources were committed to other more pressing projects. By this time, Air Force authorities had also revised the original requirement to include the role of level bombing which further hampered development as the changes to the B 18 were forced. The result was an oft-delayed first-flight occurring on June 19th, 1942. Testing and evaluation took the official introduction year to 1944.

The aircraft, said to have been influenced by America medium bomber designs of the period (indeed some Americans made up the Saab engineering staff), utilized a conventional twin-engine configuration. The engine nacelles were underslung along each wing mainplane and the mainplanes themselves were shoulder -mounted along the fuselage sides. The fuselage was given a rather deep appearance along its frontal section but tapered off nicely towards the empennage. The tail unit held a twin-rudder arrangement along upward-cranked horizontal planes. The crew spaces were concentrated at the front of the fuselage and heavily glazed - in this way, the aircraft mimicked some of the German medium bomber designs of the early-war period more than anything. The crew, numbering three, constituted the pilot and flight navigator in the traditional cockpit position over the nose with the bombardier seated in a position at the nose proper.

Power for the aircraft began with 2 x Pratt & Whitney R-1830 "Twin wasp" radial engines and these were seen in the original two prototypes and the B18A production forms. However, the engines gave only basic performance as the aircraft was more or less underpowered. Only later, in the B18B production model, were more powerful Daimler-Benz DB 605B inlines used and these outputted 1,475 horsepower apiece. Performance specifications (B18B) included a maximum speed of 360 miles per hour, a range out to 1,405 miles and a service ceiling up to 32,152 feet.

Internally, the bomber was cleared to carry up to 2,200lb of conventional drop stores. Local defense was handled through 2 x 13.2mm heavy machine guns, one each at the bombardier's and navigator's positions, while a third 13.2mm machine gun was fitted to the wing root in a fixed, forward-firing mounting managed by the pilot.©MilitaryFactory.com
Advertisements

The initial reconnaissance bomber of 1944 was the B-18A which flew with the aforementioned Pratt & Whitney radial engines. Production accounted for sixty-two of this type and led to a photo-reconnaissance conversion model known as the S 18A outfitted with PS-18 radar - conversion work of all 62 B18A bombers was had from 1946-1947.

The upcoming B18B became the definitive mark of the series in that it introduced Daimler-Benz DB605 inline piston engines of greater power and improved versatility. A prototype first flew on July 10th, 1944 and 119 production models then followed. Beyond their notable engine fits, the mark carried provision for 8 x air-to-surface rockets and held an increase bomb load of 3,300lb. In the Swedish inventory, the B18B was categorized as a dive bomber.

The B18B went on to influence the "T-18B" torpedo bomber but complexities in this program forced the aircraft to be finalized, and adopted for service, as a dedicated ground attack platform. Changes included a nose-mounted 57mm Bofors autocannon along with 2 x 20mm cannons for a formidable offensive "punch". Fifty-two of this type were produced.

Because of Sweden's neutrality in World War 2, the B18 was never proven as a combat platform. It soldiered on into the late 1950s until it was given up for good in 1959. Late versions did away with the third crewmember's position and ejection seats were added for the remaining two crew due to the aircraft's noticeable accident rate. Some of the last known service actions involving B 18 aircraft was in missile testing for the Swedish Air Force. The line was directly succeeded by the Saab 32 "Lansen" aircraft (detailed elsewhere on this site).

Production of the B 18 spanned from 1944 to 1948 and yielded 245 total aircraft under the Svenska Aeroplan AB brand label. Design of the system was attributed to Frid Wanstrom and Carl Haddon.©MilitaryFactory.com
Note: The above text is EXCLUSIVE to the site www.MilitaryFactory.com. It is the product of many hours of research and work made possible with the help of contributors, veterans, insiders, and topic specialists. If you happen upon this text anywhere else on the internet or in print, please let us know at MilitaryFactory AT gmail DOT com so that we may take appropriate action against the offender / offending site and continue to protect this original work.
Advertisements

OPTIONAL:
Up to 3,300 conventional drop bombs held internally and across eight underwing hardpoints. 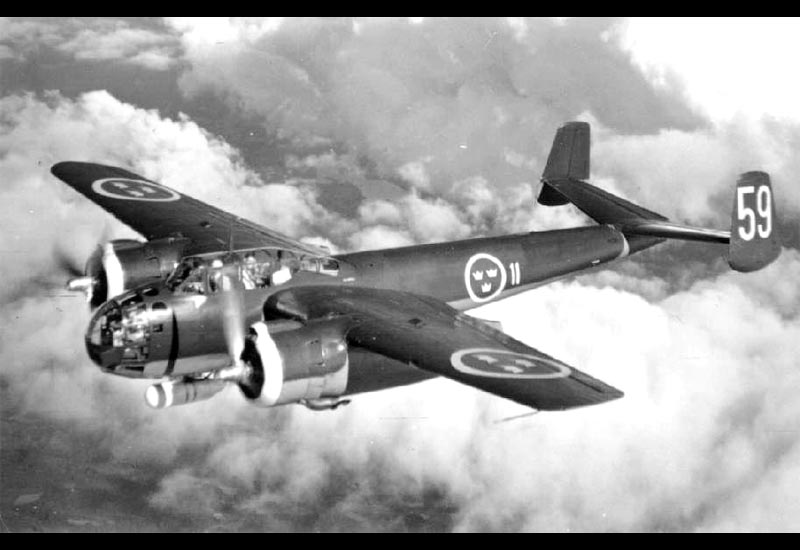