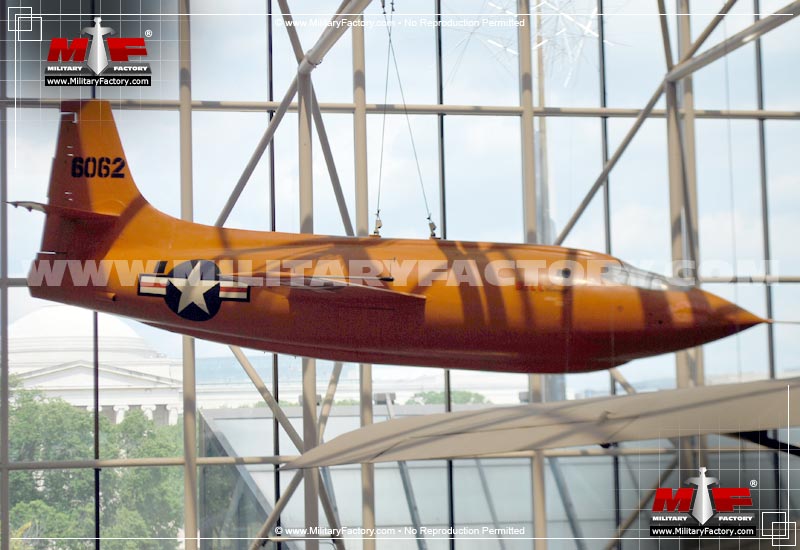 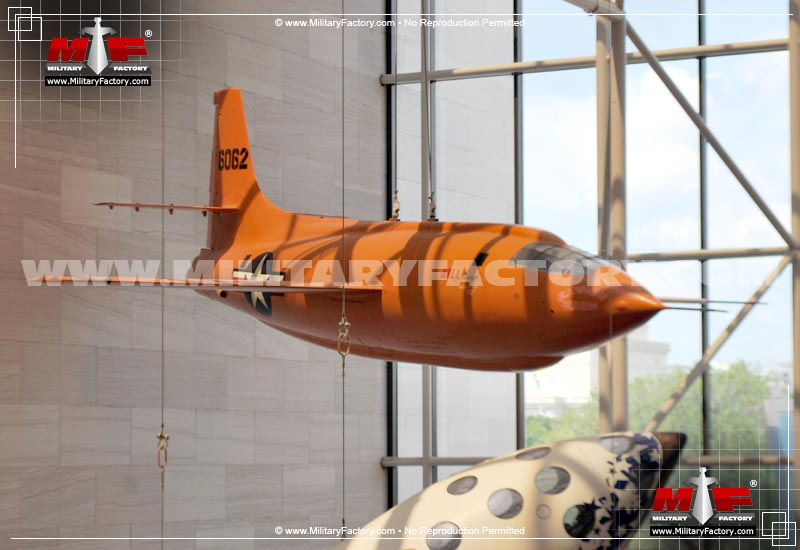 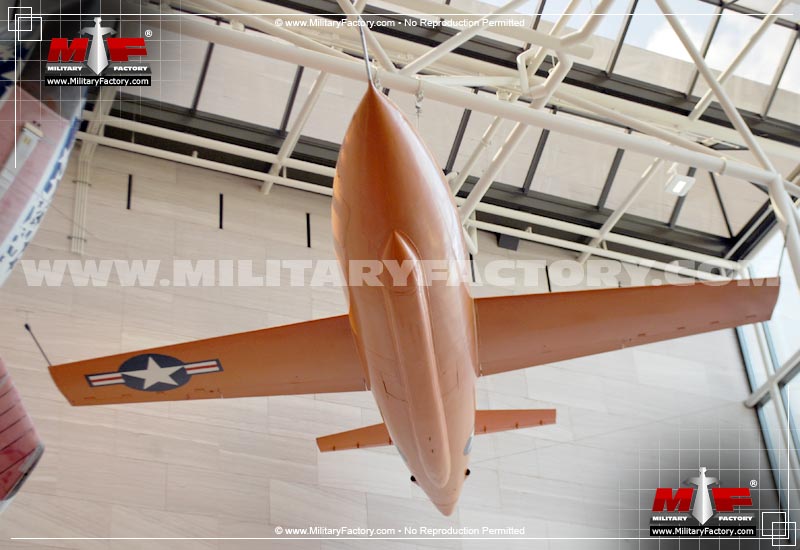 The Bell X-1 rocket-powered research platform was quite possibly the most important American aircraft of the 20th Century.

Authored By: Staff Writer | Last Edited: 08/24/2018 | Content ©www.MilitaryFactory.com | The following text is exclusive to this site.
Bell Aircraft Company was contracted to build three XS-1 ("Experimental Supersonic 1") rocket planes for use by the National Advisory Committee for Aeronautics (NACA), forerunner to today's NASA, and the United States Air Force (USAF) - previously recognized as the United States Army Air Forces (USAAF) during the World War 2 years. The primary purpose of the program was to collect data at transonic and supersonic speeds and help better understand the operating environment therein and apply this research to a new generation of jet-powered aircraft designs for USAF service. The endeavor picked up speed in 1944 as the war raged on in Europe and the Pacific and construction of the vehicle came in 1945. By the time the aircraft evolved into its finalized form, it was known as the Bell X-1 and took on its iconic silhouette with bright orange paint scheme.

The chief propulsion system for the X-1 became the XLR-11 liquid-fueled rocket engine (by Reaction Motors, Incorporated) which featured a four-chamber arrangement. As a rocket, the system would provide for only a short window of consistent thrust until its fast-burning fuel was used up. It was during this window that the all-important flight data would be collected for later assessment. The multi-chamber approach allowed the pilot to vary thrust through 1,500 lb thrust increments. The engine was buried within the stout, rounded fuselage (said to mimic the shape of a 0.50 caliber cartridge) of the X-1 and included straight, mid-mounted wing mainplanes, a standard single vertical fin, and a forward-set cockpit. The sole pilot - not even given the benefit of an ejection seat - manned the aircraft within the confines of this cockpit which sat under a heavily glazed, though flush canopy assembly. The aircraft was given its own undercarriage which allowed the pilot controlled, unpowered (glided) landings. The aircraft's overall construction was of aluminum with dimensions being a length of 9.4 meters, a wingspan of 8.5 meters, and a height of 3.3 meters.

A first unpowered flight was made on January 25th, 1946 with pilot Jack Woolams behind the stick and nine more such flights followed. Chalmers Goodin then took over following Woolams' death and managed twenty-six more flights for the X-1 into June of 1947. On October 14th, 1947, the Bell X-1 went down in American aviation history when it flew faster than the speed of sound, attaining a speed of 700 miles per hour (Mach 1.06) at 43,000 feet. At the controls was famous American aviator Chuck Yeager whose name eventually became synonymous with the American test programs of the 1940s and 1950s. This initial powered flight saw the X-1 carried within the bomb bay of a specially-modified Boeing B-29 Superfortress. The X-1 was air-launched once the bomber had reached the required altitude of 23,000 feet and, from there, the X-1 would engage its rocket engine and climb to a predetermined test altitude before reaching its record speed.
On a March 26th, 1948 flight, Yeager and his aircraft reached a speed of 957 miles per hour (Mach 1.45) at 71,900 feet, setting a new airspeed record and altitude record at the same time. In January of 1949, Yeager completed a conventional runway takeoff in the X-1 - the only such occurrence involving the typically air-launched vehicle. The aircraft reached 23,000 feet in just 1.5 minutes. Yeager ended up naming the X-1 the "Glamorous Glennis" in honor of his wife.

The value of the X-1 to help study various phenomena of high speed powered flight helped to extend it across several notable variants. The original X-1 group was made up of three test aircraft recognized simply as X-1-1, X-1-2, and X-1-3. The X-1A followed in 1948 and was used for data collection in the Mach 2+ environment. This aircraft was given several modifications from the original X-1 that included installation of a bubble canopy for improved out-of-the-cockpit vision, a lengthened fuselage, and an increased Maximum Take-Off Weight (MTOW) while retaining the original's rocket engine installation. First flight of this mark was on February 14th, 1953. X-1A was eventually given an ejection seat. The aircraft was lost to a fuel explosion in August of 1955.

The X-1B was used in the high-speed thermal research role and given modified wings as well as small "reaction" rockets for more precise controlling. First flight came in October of 1954 and this mark ended its days in early 1958 due to structural fatigue. The vehicle was able to finish 27 flights in all. The X-1C only saw the mock-up stages before being cancelled. It was intended for weapons testing but was undone by the arrival of suitable USAF operational aircraft that could be modified for the role.

The X-1D was used in heat transfer research and fitted with a low-pressure fuel system and updated avionics. This vehicle completed one successful gliding test flight on July 24th, 1951 though the nose landing leg failed upon touchdown resulting in damage. Once repaired, the vehicle was lost to a fuel explosion on August 22nd, 1951 during its one and only powered flight attempt. With changes in place to help reduce the chance of fuel explosions, the X-1E was born. First flight (unpowered glide) was on December 15th, 1955 and this vehicle eventually reached the Mach 3 mark during its testing days while completing a total of 26 flights. Structural fatigue eventually did this mark in as well for it was shelved thereafter.

Of the completed aircraft, X-1-, X-1B, and X-1E were saved as museum showpieces, today residing at the National Air and Space Museum (Washington, D.C.), the National Museum of the United States Air Force (Dayton, Ohio), and the NASA Dryden Flight Research Center (Edwards AFB, California) respectively. The data collected by the program make it one of the most important American (and world aviation for that matter) test aircraft to ever grace the skies for it helped to fuel all-new supersonic designs that followed - both military and civilian in nature.

(Showcased performance specifications pertain to the base Bell X-1 production variant. Compare this aircraft entry against any other in our database. View aircraft by powerplant type)
None. Internal provision housing flight data and test equipment. 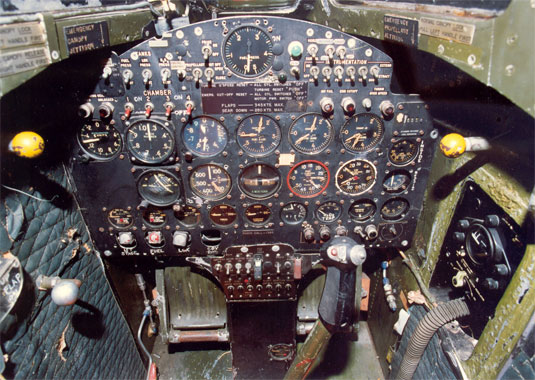