A turbojet-powered version of the classic Republic P-47 Thunderbolt fighter was briefly considered by the USAAF after the arrival of the Messerschmitt Me 262 over Europe. 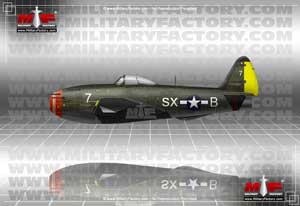 By the end of 1944, the Germans had pushed the Messerschmitt Me 262 "Schwalbe" into operational service, giving German pilots a decided edge in the skies over Europe. This prompted American authorities to expedite work on their own jet-powered types. However, traditional long-term development was not favored so the route of converting an existing airframe was entertained in an effort to bring the jet fighter into service as quickly as possible. One endeavor emerged from Republic whose P-47 "Thunderbolt" had already entrenched its legacy in the years-long war.

The P-47 seemed a natural choice because of its oversized fuselage housing the massive and powerful Pratt & Whitney R-2800 "Double Wasp" series radial piston engine. The Republic product itself was a workhorse and excellent gunnery platform while also being used in the attack role by way of dropping bombs and launching rockets. The "tear-drop" style canopy gave its sole pilot excellent vision for a combat fighter and the inherent performance of the aircraft as a whole was equally excellent - capable of going toe-to-toe with the latest Messerschmitt Bf 109 and Focke-Wulf Fw 190 prop-driven designs coming out of German factories.

Initially, engineers were called to fit the General Electric J31 centrifugal compressor turbojet engine into the aircraft in place of the R-2800. This jet engine was the same as used in the upcoming Bell P-59 "Airacomet" fighter as well as the Ryan FR "Fireball" mixed-power fighter and could generate up to 1,650 lb of thrust. In theory the mating seemed viable but it was soon found that, despite the large diameter of the P-47's existing fuselage, it was still not large enough to accommodate the J31 engine without much modification to the structure - thus delaying testing and service entry. From there came the decision to replace the J31 with the Allison J35 (about 4,000lb of thrust), this engine originally developed by General Electric as well. This engine would also soon power the classic Republic F-84 "Thunderjet" and Northrop F-89 "Scorpion" lines of the Cold War years (1947-1991) and its size was better suited to the P-47's airframe so work began to redraw the lines of the aircraft.

Because the R-2800 and its propeller were situated at the nose, their removal cleared the section for a nose-mounted intake and armament. The intake aspirated the J35 unit through a curved duct assembly running under the cockpit floor. The J35 would be buried under the pilot's position, promoting a deeper fuselage than even the original P-47 had. Exhausting of the turbojet was through a simple port found under the tail fin. The 8 x 0.50 caliber Browning heavy machine guns originally mounted to the wings (four per wing) were now relocated to the nose for better concentrated firepower. The elliptical wings of the P-47 were retained as were the rounded tailplanes featuring a single vertical fin. It is assumed that the original tail-dragger undercarriage would have been retained as well.

Nevertheless, this proposed turbojet-powered P-47 (no formal name or model designator was ever assigned to the "paper" project) never made it beyond some concept drawings commissioned by Republic. In the end, the mating of the J31 with the P-47 airframe was not meant to be for it was becoming an impractical exercise best left to the imagination. There were also ongoing concerns about the imbalance that the engine would have caused on an aircraft originally intended to feature its mass at the front. Engineers also realized that the P-47 airframe, as it was, stood to gain very little in terms of performance for it was already nearing its maximum specs even with its R-2800 in place.

As such, the P-47 offshoot never emerged into a realistic prospect leaving the USAAF to pursue the traditional design and development route for its first jet - which became the mildly successful P-59 from Bell.

Performance and structural dimensions reported on this page are estimates on the part of the author.
Advertisements

(Showcased performance specifications pertain to the base Republic P-47 (Turbobolt) production variant. Compare this aircraft entry against any other in our database or View aircraft by powerplant type)
PROPOSED:
6 OR 8 x 0.50 caliber Browning M2 Heavy Machine Guns (HMGs) in the upper nose assembly.

P-47 "Thunderbolt" - Base Series Designation on which the turbojet-powered form was based on. 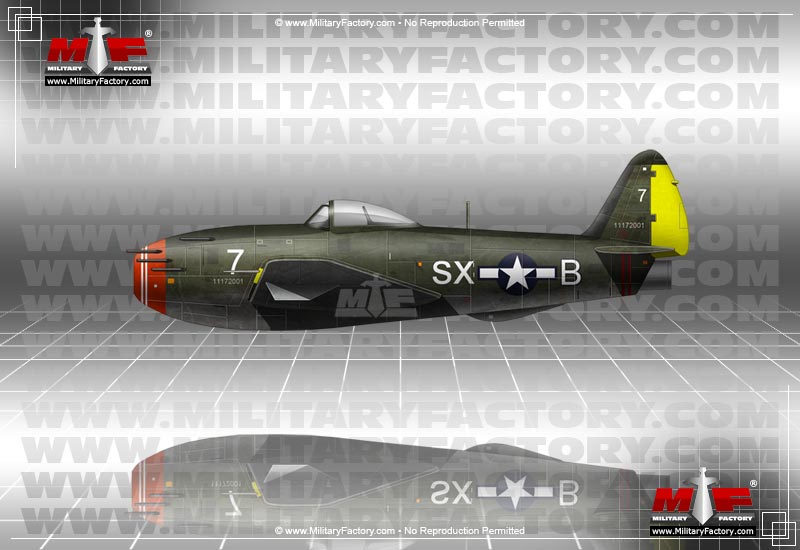