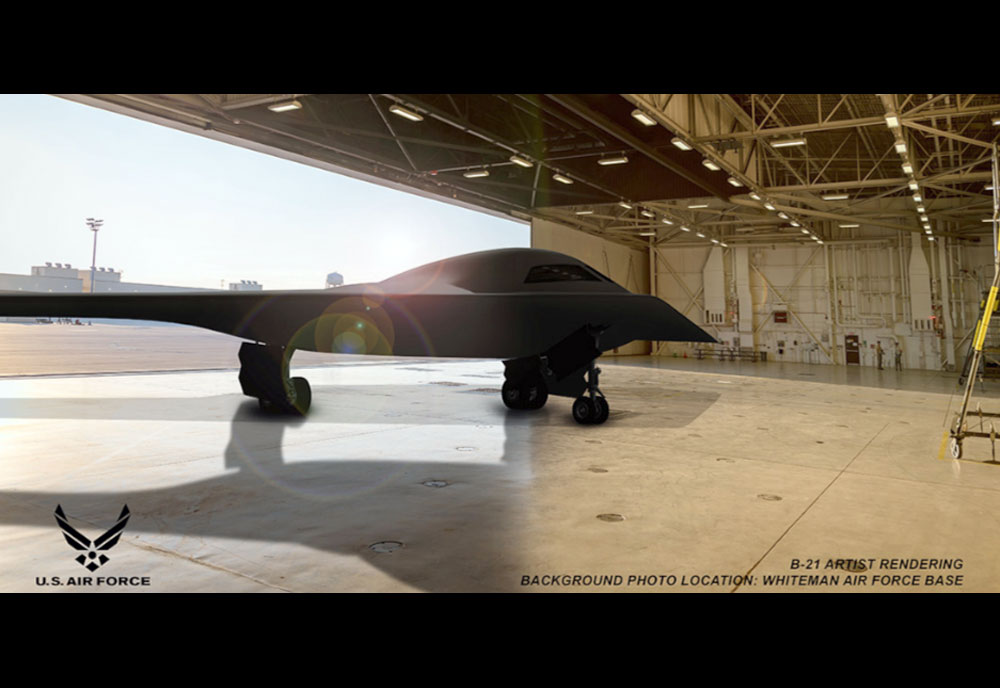 Official artist rendering of the B-21 Stealth Bomber.
2 / 4 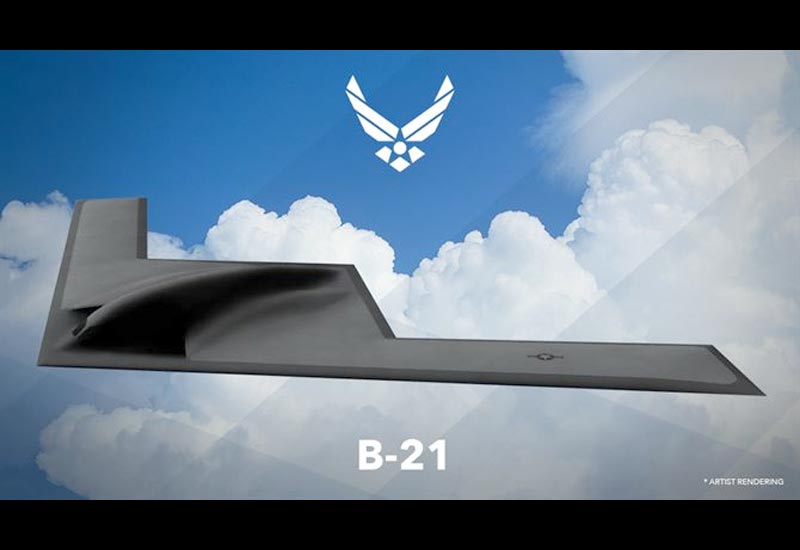 Official artist rendering of the B-21 Stealth Bomber.
3 / 4 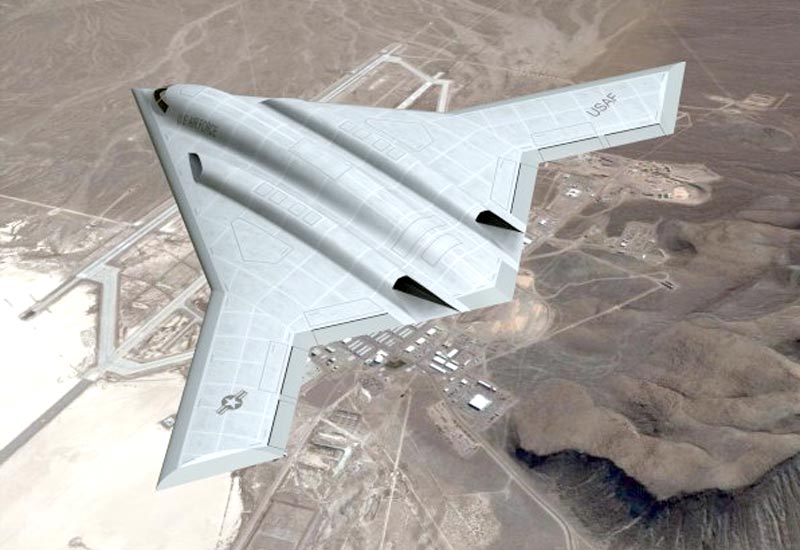 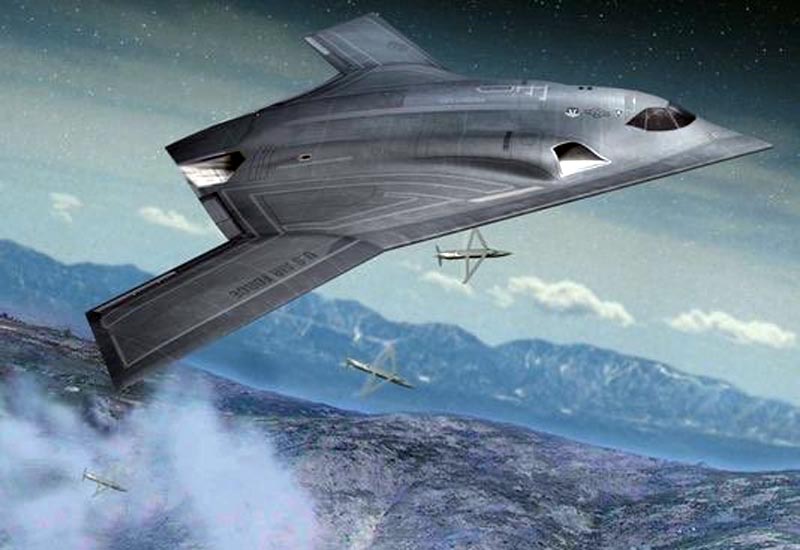 Northrop Grumman was awarded the rights to design, develop, and produce the next USAF strike bomber through the LRS-B initiative.

On February 26th, 2016, the designation of "B-21" was revealed for the upcoming Northrop Grumman LRS-B program. Artist renderings were also revealed and showcase a bomber form not unlike the current B-2A "Spirit" series currently in USAF service. Performance and capabilities will be forthcoming as the project is evolved - as such, this article will be updated accordingly.

The B-21 is expected to enter service in the latter half of the 2020s with a target fleet of 100 aircraft. These will be used to succeed (perhaps optimistically at this point) the aging line of Boeing B-52, Rockwell B-1 and even Northrop's own B-2 stealth bombers currently in service. The USAF's Rapid Capabilities Office (RCO) is heading the initiative.

Based on released artist renderings, the B-21 will have an all-wing planform not unlike the B-2A "Spirit" stealth bomber, incorporating all learned, and possibly new, stealth techniques into its design. The flight crew numbers two and the team is seated at the apex of the "arrow" shape of the planform. All major compartments are situated at the center mass of the aircraft whose fuselage is blended into the wings to promote a very-low-profile when viewed from the size. At rear, the engines will be (as in the B-2A) embedded into the design with its exhaust protected as much as possible from IR locators. A conventional, multi-wheeled retractable tricycle undercarriage is assumed for ground-running. An unmanned option has been bandied about for the new bomber design.

Compared to the B-2A, the B-21 will be given an extended nose section, or "beak", forming the apex of the arrow-like form. The nose leg of the undercarriage is set to be placed further aft in the nose compartment and will be made to a shorter height specification while the main legs are simplified by showcasing fewer wheel bogies. The cockpit is detailed with two windscreens (as opposed to four as seen in the B-2A) and the engine inlet will be integrated closer to the center mass of the fuselage, reducing the overall length of the fuselage itself. Attention is being paid to medium-/higher-altitude flight controlling by implementation of a simplified wing by the trailing edges and "sawtooth" leading edges.

Overall dimensions appear to indicate a smaller overall bomber form when compared to the relatively massive B-2A though true specifications have yet to be revealed.

March 2017 - It was announced that the B-21 had passed a pair of preliminary design reviews.

November 2017 - Requirements of the B-21 product, and its basic design, have been completed.

June 2018 - The B-21's Critical Design Review (CDR) is slated for completion before the end of 2018. The CDR phase precedes the component manufacturing step required to produce a flyable prototype.

October 2019 - The first B-21 airframe is under construction by Northrop Grumman out of the company's Palmdale, California facility. A first-flight is tentatively scheduled for December 2021.

August 2020 - The first B-21 test aircraft is entering final assembly. A first-flight is tentatively scheduled for sometime in 2022 with deliveries to occur sometime in the middle of the decade at the earliest.

August 2020 - The B-21 avionics testbed has been announced as operational.

June 2021 - Ellsworth Air Force Base has been selected as the first operational base to feature the new USAF B-21 stealth bomber.

September 2021 - The USAF has revealed that five test-minded B-21 airframes are currently under construction by Northrop Grumman, these examples nearing final assembly.

RADAR-CAPABLE Houses, or can house (through specialized variants), radar equipment for searching, tracking, and engagement of enemy elements.
COUNTERMEASURES Survivability enhanced by way of onboard electronic or physical countermeasures enacted by the aircraft or pilot/crew.
MULTI-ENGINE Incorporates two or more engines, enhancing survivability and / or performance.
WING SWEEPBACK Mainplanes, or leading edges, features swept-back lines for enhanced high-speed performance and handling.
INTERNAL BAY Fuselage volume includes space for internally-held weapons or special-mission equipment.
HIGH-ALTITUDE PERFORMANCE Can reach and operate at higher altitudes than average aircraft of its time.
EXTENDED RANGE PERFORMANCE Capability to travel considerable distances through onboard fuel stores.
PILOT / CREW EJECTION SYSTEM Assisted process of allowing its pilot and / or crew to eject in the event of an airborne emergency.
CREWSPACE PRESSURIZATION Supports pressurization required at higher operating altitudes for crew survival.

(Showcased performance specifications pertain to the Northrop Grumman B-21A production variant. Compare this aircraft entry against any other in our database. View aircraft by powerplant type)
Assumed internal weapons bay supporting up to 50,000lb of ordnance (conventional drop bombs and precision-guided bombs) including nuclear-tipped bombs/missiles.

(Not all ordnance types may be represented in the showcase above)
B-21 - Official Series Designation applied in February of 2016.
LRS-B ("Long Range Strike - Bomber") - Project Name

Values are derrived from a variety of categories related to the design, overall function, and historical influence of this aircraft in aviation history.
Overall Rating
The overall rating takes into account over 60 individual factors related to this aircraft entry.
48
Rating is out of a possible 100 points.
Relative Maximum Speed
Hi: 750mph
Lo: 375mph
This entry's maximum listed speed (621mph).