No examples of the Heinkel P.1079 Zerstorer were built before the end of World War 2 but some wind tunnel testing was attempted.

Authored By: Staff Writer | Last Edited: 08/06/2019 | Content ©www.MilitaryFactory.com | The following text is exclusive to this site. 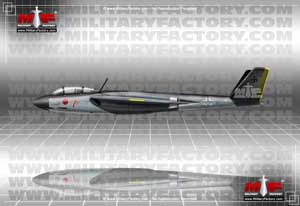 One of the greatest threats to The Reich in the latter stages of World War 2 (1939-1945) was the bombing campaign being waged on German war-making capabilities by British and American bombers. The campaign was relentless, arriving during the day and continuing throughout the night, laying waste to factories, bridges, supply depots and the like. Ultimately, the German Air Ministry was forced to entertain all concepts involving interceptors, fighters, and "bomber destroyers" to help turn the tide of the air campaign some.

In Germany, the bomber "destroyer" took on the name of "Zerstorer" and this was used to describe several designs initiated for the role. The classic early-war example for the Luftwaffe became its twin-engined Messerschmitt Bf 110 (detailed elsewhere on this site) and other types followed though with less success. As effective as the Messerschmitt design was, it reached the pinnacle of its usefulness early on and remained on stage long enough to become cannon fodder for more advanced Allied fighters in time.

The arrival of a viable turbojet engine in Germany rewrote its approach to military aircraft design. While not wholly reliable and typically fuel-thirsty, the new propulsion method offered inherent speed and performance increases that would surely provide German pilots with the upper hand. This sort of power, it was thought, could be effectively unleashed on Allied bomber formations as they made their way to the target, jet interceptors picking apart the groups through cannon fire. The chief challenge for aeronautical engineers now lay in devising airframes suitable for turbojet propulsion - the speeds at play required particular aerodynamics.

Heinkel became a prominent aircraft-designer and -maker for Germany and submitted such classics as the prop-powered He 111 Medium Bomber. It also pushed the He 178 and He 280 jet-powered developments to fruition and, beyond these projects, there arrived a slew of offerings of which few found little success. That aside, the turbojet inspired Heinkel engineers to think "beyond the box" and this resulted in several very unique initiatives by the company - the He 162 "People's Fighter" - or "Volksjager" - became one of the more iconic jets to see combat service before the end of the war.

Siegfried Gunther led a design team that fleshed out a new Zerstorer platform to serve in the interception, fighter and night-fighter roles. To ensure destruction of a given target, no fewer than 6 x 30mm Mk 108 series were installed in the airframe, four to fire forwards and two aiming aft. The aircraft could, therefore, engage a target in front or behind it (including trailing enemy interceptors). Power would come from 2 x Heinkel HeS 011 series turbojets laid in a side-by-side arrangement, straddling the fuselage at the wing roots, and producing 5,732lb of thrust combined. The engines would exhaust before the tail section.

Outwardly, engineers devised a very modern-looking fighter type - streamlined and well-arranged. The cockpit sat aft of a short nosecone and offered excellent vision for its crew of two (the pair seated inline, back-to-back). The fuselage in profile was of a slim, teardrop shape with the wing mainplanes swept back and mid-mounted along the fuselage sides while being held ahead of midships. The fuselage tapered finely to become the empennage and it was here that the product held perhaps its most unique design characteristic - a "V-tail" arrangement, this used to negated the use of traditional horizontal tail-planes (the V-tail served as both rudder and elevator surfaces). A tricycle undercarriage (wholly retractable) was planned as was cockpit pressurization. A radar would be fitted in the nosecone assembly for allowing the aircraft success against bombers at night. The forward-facing cannons were installed under the nose, further aft in the fuselage to keep the nose clear for radar. Engaging with the rear-facing cannons (which were fixed in their mountings) involved direction by the rear-facing crewman using the onboard radar with the guns themselves engaged by the pilot (via a retractable "back-aim binocular" used for fine visual tuning). As no armoring was expected (to keep the aircraft as light as possible) the rear-facing guns served a critical defensive role.
Advertisements

Jettisonable rocket packs would be installed on the aircraft during pre-flight and jettisoned once their fuel had been spent. This quality would have allowed the interceptor to take-off and achieve the desired attack altitude in short order without solely relying on the turbojet engines - which were generally under-powered for the period and could not be pushed too hard.

The aircraft came to be known under the designation of "Projekt 1079" - or "P.1079". It was an optimistic design for an early jet that attempted to combine multiple crew, a radar fit, good operational ranges, and top-flight performance characteristics into a single airframe. If successful, swarms of such aircraft could affect the Allied bombing campaign while, if a failure, the design would set back German priorities for some time and worsen its already bleak situation.

At least three versions of the P.1079 were planned as "A", "B" and "B-2". The initial model was the true V-tail version with its wing mainplanes swept back at 35-degree angles. The B-model was to feature "gull wing" mainplanes and simplify the tail unit to include a more traditional vertical fin. Additionally, this mark was to serve as an all-weather, heavy fighter and feature a reduced crew of one while still largely following the form and function of the A-model being planned. The B-2 offering was a completely tail-less form with very-well-swept wing mainplanes for high-speed performance and extended operational ranges, the latter brought about by installing additional fuel stores within the wings.

The A-model moved forward and it was estimated that the system could reach speeds of 615 to 620 miles per hour and out to a range of 1,300 miles while cruising well above 30,000 feet. Metal was selected for its construction which proved at least one sticking point - metal was a precious commodity for Germany, particularly in the late-war years. Aerodynamic efficiency would be the call-of-the-day for Heinkel engineers as every amount of speed had to be extracted from the airframe so flush surfaces were used where appropriate and weight-saving measures whenever possible.

Wind tunnel testing was essentially all that became of the P.1079 initiative. Several variations were enacted on the tail unit - one version was even akin to a flying wing - but the best fit was found to be a "T-style" tail for the design (as seen in several classic post-war fighter jets like the North American F-86 "Sabre" and the Mikoyan-Gurevich MiG-15). The P.1079 failed to graduate into a full-sized mockup or flyable prototype before the end of the war arrived, leaving the project to the pages of Luftwaffe history.
Advertisements

(Showcased performance specifications pertain to the Heinkel He P.1079A production variant. Compare this aircraft entry against any other in our database or View aircraft by powerplant type)
PROPOSED:
4 x 30mm Mk 108 cannons under the nose (forward-facing).
2 x 30mm Mk 108 cannons (periscope-directed, rear-facing). 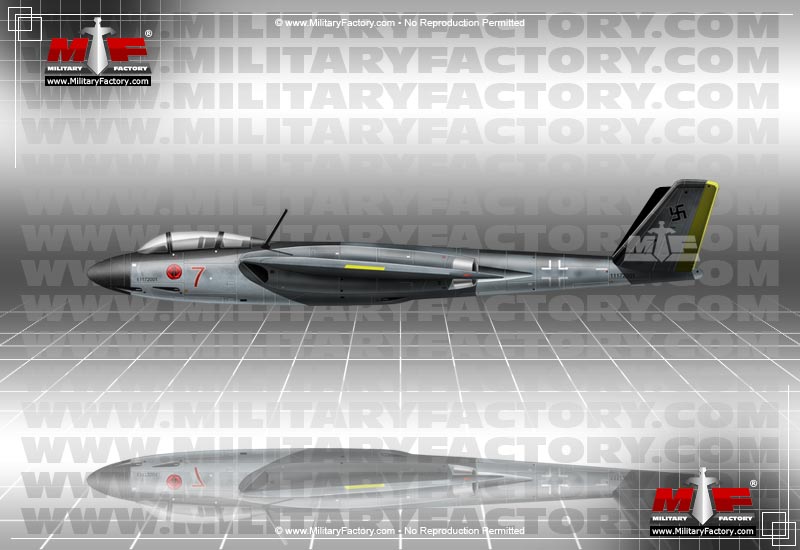