The Nakajima J5N interceptor prototype never managed to live up to its IJN requirements - managing just six prototypes before its end came in February of 1945.

Authored By: Staff Writer | Last Edited: 05/19/2016 | Content ©www.MilitaryFactory.com | The following text is exclusive to this site. 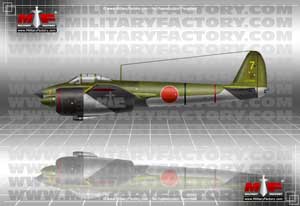 Japanese aircraft engineers made some notable contributions to military air power prior to, and during, World War 2 (1939-1945). However, as with any nation growing with technology and experience, the small Pacific nation also failed to deliver on some of its ventures. The J5N was one such forgotten design which netted the Nakajima program just six total prototypes before abandonment was ordered. The twin-engine heavy fighter was developed to an Imperial Japanese Navy Air Service (IJNAS) requirement calling for a new interceptor to counter the threat of much-improved Allied warplanes appearing over the Pacific Theater in number.

The Navy requirement came in the early half of 1943 and specified a single-seat, twin-engined platform with a maximum speed near the 415 mark when cruising at 19,700 feet. Unlike previous Japanese naval fighters, this new aircraft was to benefit from the protection offered by armor plating. Armament was to have been potent - a battery of cannon being installed - and a provision for bomb-carrying was also an added bonus.

Nakajima returned with a modified, dimensionally smaller version of their J1N1 "Gekko", a three-seat platform intended as a dedicated night-fighter. The new aircraft was known as the "J5N" and carried straight wing mainplanes, each with underslung engine nacelles driving four-bladed propellers. The cockpit was set well-forward along the long, tapering fuselage to provide for excellent vision out-of-the-cockpit. Additionally, the cannon battery would be concentrated in the nose assembly. The tail relied on a single vertical tail fin and the undercarriage utilized a "tail-dragger" arrangement.

In terms of armament, the J5N was to feature either 2 x 20mm Type 99-2 cannons or 2 x 30mm cannons in its nose. The listed bombload was 551lb consisting of a sole drop bomb held under the belly.©MilitaryFactory.com
Advertisements

The engines of choice became the in-house Nakajima Homare 21 series 18-cylinder air-cooled radial offering up to 1,990 horsepower output each. Radials required air cooling and larger engine nacelles but were less delicate than their inline brethren. The pilot's location in the design offered clear vision to each engine installation while still keeping forward vision rather excellent for carrier deck approaches and take-offs.

Satisfied with the Nakajima offering, the IJN ordered full development of the aircraft and contracted for six prototypes to prove the design sound. Engineers fought consistently against weight gains being incurred from the specified armament fit as well as cockpit, systems and fuel stores armoring. With the ballooning weight, the aircraft was further hampered by the less-than-desired output of the engine pair and handling was deemed unsatisfactory to boot. A gun-less prototype went to the air for the first time on July 13th, 1944 and managed only 371 miles per hour as its top speed.

This led to a period of hasty refinement for the design until it was realized that a full reworking was in order to truly meet the IJN demand. Six aircraft were ultimately completed - two interestingly finalized as two-seaters - but four of the stock were eventually lost to various accidents, proving that the J5N needed much more work than time allowed. The constraints of a failing war effort and the changing fortunes of Japan in the Pacific ultimately led to project cancellation in February of 1945. The unconditional Japanese surrender then arrived in August officially ending World War 2 in full.

The J5N was to carry the name "Tenrai" in service, this translating to "Heavenly Thunder".©MilitaryFactory.com
Note: The above text is EXCLUSIVE to the site www.MilitaryFactory.com. It is the product of many hours of research and work made possible with the help of contributors, veterans, insiders, and topic specialists. If you happen upon this text anywhere else on the internet or in print, please let us know at MilitaryFactory AT gmail DOT com so that we may take appropriate action against the offender / offending site and continue to protect this original work.
Advertisements

(Showcased performance specifications pertain to the Nakajima J5N1 Tenrai (Heavenly Thunder) production variant. Performance specifications showcased above are subject to environmental factors as well as aircraft configuration. Estimates are made when Real Data not available. Compare this aircraft entry against any other in our database or View aircraft by powerplant type)
PROPOSED, FIXED:
2 x 20mm Type 99-2 cannons OR 2 x 30mm cannons in nose. 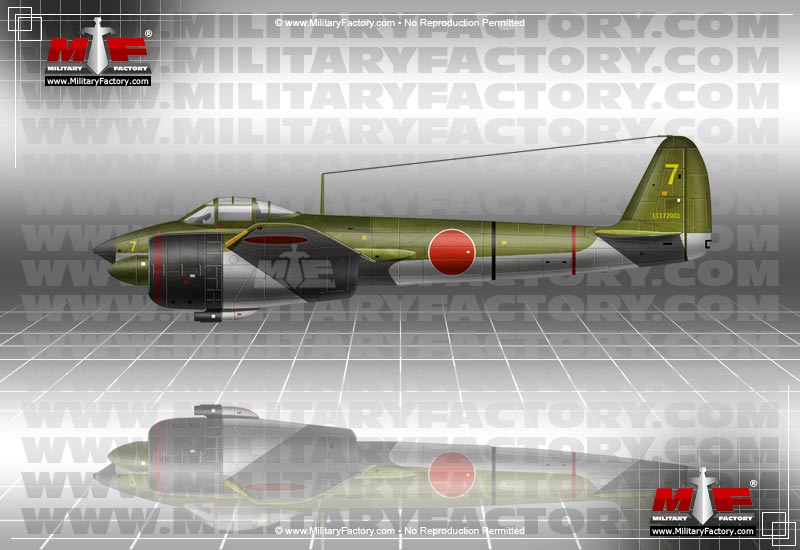