The Martin-Baker MB.3 was a further evolution of the MB.2 incorporating all of the lessons learned from the earlier design.

Authored By: Staff Writer | Last Edited: 09/05/2017 | Content ©www.MilitaryFactory.com | The following text is exclusive to this site. 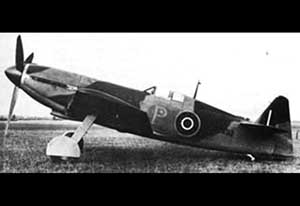 The original Martin-Baker MB.1 civilian-minded lightweight aircraft was lost in a fire that claimed the prototype. MB.2 was developed to an Air Ministry requirement as a fighter and continued the weight-savings construction process employed in the MB.1 but this design offered no new advancements over the existing stable of Royal Air Force (RAF) and Royal Navy (RN) fighters so this offering gradually fell to aviation history. Martin-Baker continued evolving its aircraft line which ultimately included the more practical MB.3, a fighter developed to Air Ministry Specification F.18/39 of May 1939 and three such aircraft were ordered for construction.

The new requirement called for a higher performance aircraft than previously attempted by Martin-Baker. The minimum top speed was 400 miles per hour and the engine of choice was to become the Rolls-Royce "Griffon" inline which was still in development (resulting in the Rolls-Royce "Merlin" to be fitted for the interim). The aircraft would carry the key qualities established in the MB.1 and MB.2 - namely its lightweight and simplified construction process which eased maintenance, repair and general operation of the aircraft.

Martin-Baker engineers went to work on the new aircraft, MB.3, in 1938 to fulfill the three-strong aircraft order. When Britain entered into World War (1939-1945) with Germany in September of 1939, the project was delayed as Martin-Baker was forced to fulfill other more pertinent RAF production requests, manufacturing various aircraft components to serve the war effort. Despite the availability of the three requested Rolls-Royce Merlin engines, the first prototype was completed with the Napier "Sabre II" 24-cylinder H-type liquid-cooled inline engine of 2,020 horsepower.
Advertisements

The resulting design surely proved the most modern Martin-Baker aircraft in appearance to date. The frame was well-streamlined and housed the inline engine at the nose with the cockpit set over midships with generally decent views of the action ahead. The long nose and large-area mainplanes defeated some vision out-of-the-cockpit but its configuration was conventional for the period. A raised fuselage spine offered greater internal space but, again, retarded views to the critical rear quarters of the aircraft. The tail unit was capped by a single vertical fin and mid-mounted horizontal planes. The undercarriage, fixed and faired over in the MB.2, was now of a more modern appearance and wholly retractable (including the tailwheel). The Napier engine drove a three-bladed propeller unit as opposed to the MB.2's two-bladed form. The cockpit canopy and entry/exit into the aircraft was reminiscent of the classic Supermarine Spitfire.

Proposed armament for the fighter was 6 x 20mm Hispano II series cannons, three fitted to each wing element. Beyond the three flyable prototypes ordered, a mainplane was also ordered that would feature 8 x 0.303 machine guns as an alternate armament fit - four machine guns to a wing.

The initial prototype went airborne for the first time on August 3rd, 19432. By this time, the war was in full swing and fighter mounts like the Spitfire and Hawker Hurricane were acquitting themselves quite nicely. There were few in the Air Ministry left actually championing the merits of the MB.3 by this point but the program was allowed to proceed nonetheless.

In early testing, the MB.3 was shown to have good flight characteristics but its engine revealed cooling issues that needed rectifying. This inevitability led to more delays in the program as engineers rushed to solve the emerging problems. On a September 12th, 1942 flight, Captain Valentine Baker (one of the founding members of Martin-Baker along with James Martin) was killed when his MB.3's engine failed and his wing caught the ground during an evasive move to avoid a structure. The sole flyable prototype was a complete loss.

With this tragedy, development of the MB.3 was all but over for the partially completed second prototype became the upcoming MB.5 development (detailed elsewhere on this site) and the third never entered the fold. Additionally, the cannon armament was never fitted nor tested and James Martin moved in the direction of less dangerous aircraft ventures - mainly processes related to pilot safety which eventually began the association of Martin-Baker with ejection seats featured in jet-powered aircraft of the Cold War years (1947-1991) (the name remains in play today with some 20,000 ejection seats having been delivered to date).

Before Baker made the complete shift to ejection seats, there was the MB.4 proposed fighter which intended to use the MB.3 body with a supercharged Rolls-Royce Griffon 37 series inline. Drawings were all that existed of this endeavor as attention shifted to the upcoming MB.5 which marked the end of the line for Martin-Baker as an aircraft-maker in World War 2. The MB.5 was also the definitive development of the line that began with the MB.2.
Advertisements

(Showcased performance specifications pertain to the base Martin-Baker MB.3 production variant. Compare this aircraft entry against any other in our database or View aircraft by powerplant type)
PROPOSED:
6 x 20mm Hispano Mk II cannons in wings (three guns to a wing).

MB.3 - Base Series Designation; sole prototype completed of the three aircraft ordered; prototype lost to a crash in September of 1942.
MB.5 - Second unfinished MB.3 prototype was completed to the revised MB.5 standard. 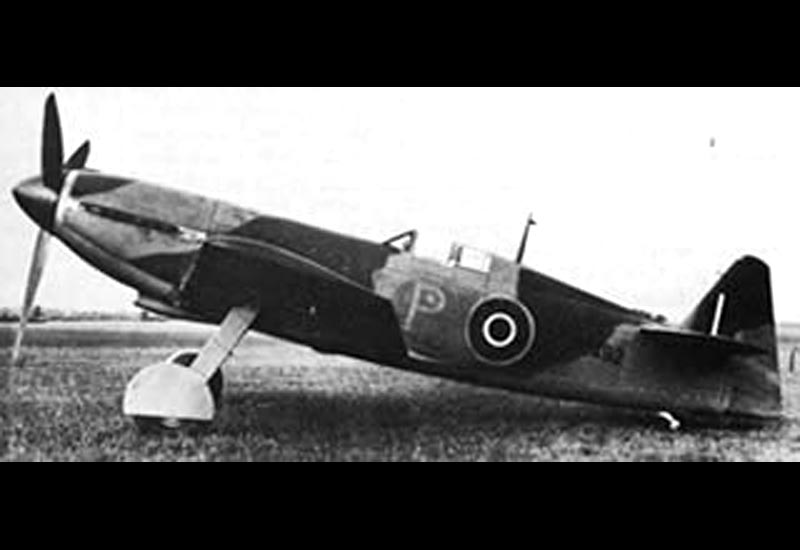