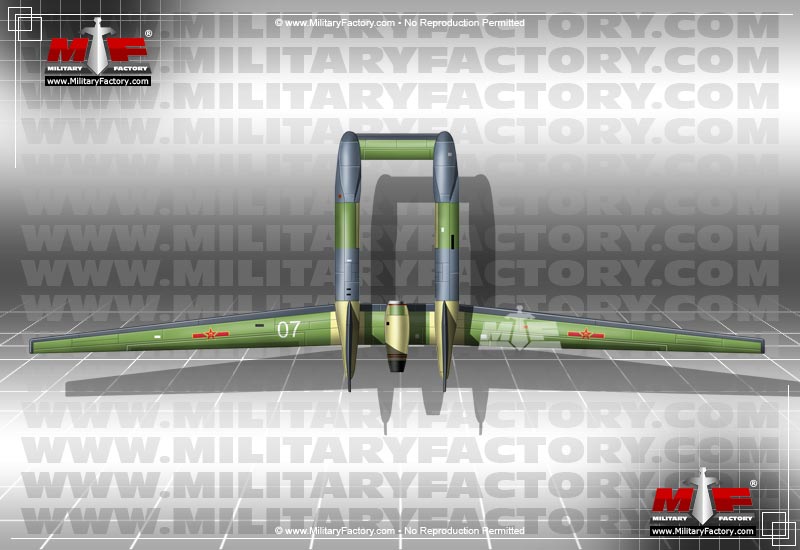 Authored By: Staff Writer | Last Edited: 05/20/2020 | Content ©www.MilitaryFactory.com | The following text is exclusive to this site.
The Shenyang "Divine Eagle" joins the Chengdu "Soar Dragon" (detailed elsewhere on this site) as two possible High-Altitude, Long-Endurance (HALE) Unmanned Aerial Vehicles (UAVs) to fulfill an ongoing Chinese military requirement. The Divine Eagle is a dimensionally large UAV in the class of the Northrop Grumman Global Hawk and is currently believed to be in the prototype stage based on Chinese internet photographs and satellite image captured - its top-down profile showcased on a runway.

Engineers took an unconventional approach when arranging the Divine Eagle. A twin-fuselage configuration is used joined by a small mainplane at front and a longer-span mainplane at rear. This produces a pseudo "twin-boom" layout and canard-wing form. The primary wing mainplanes are seated aft of midships and extend outwards from the ends of the two fuselage nacelles. Twin tall vertical fins complete the tail section. The forward mainplane is far more contained, nestled between the two fuselage noses and are not extended beyond the nacelles. The sole turbojet engine powering the air vehicle is seated between the twin vertical fins at rear and atop the joining horizontal section of the rear mainplane. A wheeled tricycle undercarriage is used for ground running. It is believed that the nose sections house radomes and the mission suite made up of sensors. Dorsal fuselage blisters may house SATCOM equipment or similar fits.

The unique design path is intended to reduce the weight of the wings while maintaining the needed high-altitude performance. The creation ends up looking like two conjoined General Atomics "Reaper" UAVs.

The chief concern to the United States and China's regional neighbors is that the Divine Eagle (and Soar Dragon) will someday be developed to support Chinese anti-ship missiles - for this Americans this means a direct threat to its warships, particularly its aircraft carriers. China's military growth and aspirations is also seen as a general threat to the region due to its claims over land areas of the South China Sea and airspace associated with it.

The Divine Eagle is not known to have completed a first flight as of yet (2015). Industry analysts place its battlefield role in Airborne Early Warning (AEW), an area of need for the Chinese military.