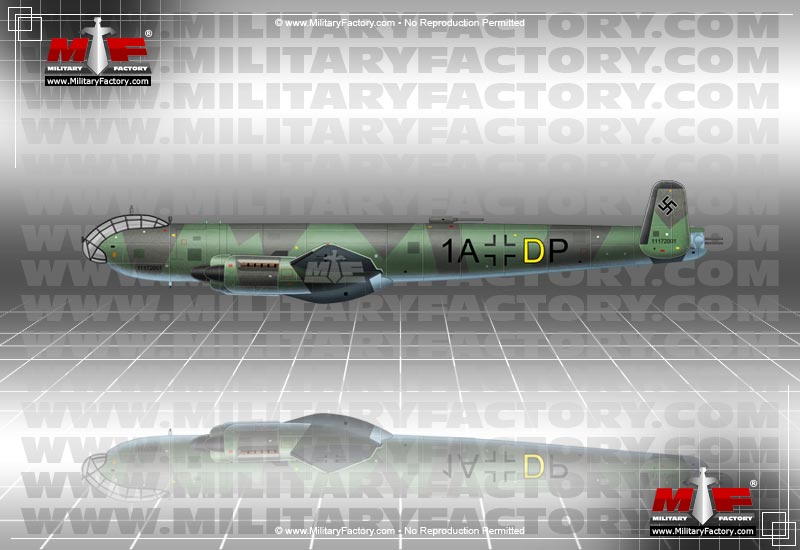 The Junkers Ju 488 four-engined heavy bomber only reached the prototyping stage before the end of World War 2.

The German concern of Junkers took on many aircraft projects during, and before to the end, of World War 2 (1939-1945). As the Luftwaffe lacked any real competing heavy bomber for which to reach long range Allied targets much investment was made in delivering a suitable heavy bombing platform for such work prior to the end of the conflict. The Ju 488 was one development stemming from work on the preceding Ju 188, Ju 288 and Ju 388 designs - however it did not see progress beyond a group of incomplete prototypes by war's end.

The finalized form of the Ju 488 was given a length of 23.25 meters, a wingspan of 31.3 meters and a height of 6 meters. Empty weight was rated at 46,300 pounds against a Maximum Take-Off Weight (MTOW) nearing 79,370 pounds. Its operating crew would number three and standard armament would be a dorsal-mounted, remotely-controlled turret armed with 2 x 20mm MG 151 cannons along with a remotely-controlled tail turret fitting 2 x 13mm MG 131heavy machine guns. These were presented as strictly defensive fixtures to engage any intercepting / trailing fighters threatening the large aircraft. An internal bomb bay would hold up to 11,025 lb of conventional drop stores.

Power was through 4 x Junkers Jumo 222A / B-3 24-cylinder, liquid-cooled engines developing 2,500 horsepower at take-off. Engineers estimated a top speed of 430 miles per hour with a cruising speed nearing 305 miles per hour, a range out to 2,110 miles, a service ceiling of 37,240 feet and a rate-of-climb of 550 feet per second. Originally, the aircraft was intended to carry 4 x BMW 801J series radial engines but this design element was eventually abandoned.

The overall design of the large bomber was consistent with previous Junkers offerings - a heavily glazed nose section was used with a long, slender fuselage and twin-finned tail unit. The undercarriage would be a tail-dragger arrangement and wings low-mounted along the fuselage sides, each fitted with a pair of engine nacelles along the leading edge and wingtips noticeably tapered to become points. The dorsal cannon armament was set just aft of midships and the tail armament nestled between the two tail fins and aft of the horizontal plane section.

Junkers brought along the Ju 488 as something of a "mutt" design utilizing existing primary components of its earlier aircraft to hasten development work. The design did enough convincing with Luftwaffe authorities that the project was allowed to be furthered and this produced the V401 and V402 prototypes which saw their fuselages being constructed in Axis-controlled France (Toulouse) during early 1944. This exposed the project to sabotage but it was forced on the Germans because of the relentless bombing campaign by the Allies over German soil - its local factories under constant threat. Prototypes V403 and V406 were then added to the development stable. Prototype V401 was damaged severely by French resistance elements during July 1944 which delayed the program considerably while progress on V403 and V406 itself proved slow enough that none of the expected prototypes ever saw the light of day. The Allied advance on the ground also played a role in the demise of the Ju 488 as its completed parts were forced to be relocated to Bernburg by rail. The forward fuselage of prototype V402 was found later by Allied forces as they made their way through France.

All of these factors, coupled with the thinking that a large, four-engined heavy bomber was no longer needed by the Luftwaffe, led to the program's formal cancellation coming before the end of 1944.

Initial production bombers would have carried the Ju 488A designation.

OPTIONAL:
Up to 5,000lb of conventional drop stores held in an internal bomb bay.

Values are derrived from a variety of categories related to the design, overall function, and historical influence of this aircraft in aviation history.
Overall Rating
The overall rating takes into account over 60 individual factors related to this aircraft entry.
32
Rating is out of a possible 100 points.
Relative Maximum Speed
Hi: 500mph
Lo: 250mph
This entry's maximum listed speed (429mph).