The Westland Wyvern became the first British ship-based turboprop-powered fighter and the only such aircraft to see combat service - this during the Suez Crisis of 1956. 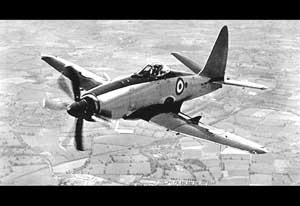 Like the United States, Britain required considerable naval power during World War 2 (1939-1945) and this went beyond the typical cruisers, destroyers and battleships to include the aircraft carrier. As such a plethora of carrier-based aircraft designs were utilized throughout the conflict, some successful and some not, and development on all new types continued into the war's final days. The Westland "Wyvern" became one of the wartime entries that arrived much too late for service in World War 2 but found some usefulness in the period immediately following. It did, however, have origins in a wartime requirement known as Specification F.13/44 with the project designation of "P.10". Work was begun as early as 1944 by Westland and the design was intended as a powerful fighter aircraft for shipboard service with a strike capability built-in.

In November of 1944, authorities moved on granting Westland a development contract for some six total prototypes of which two would be set aside for a special land-based version to be used by the Royal Air Force (RAF). The remaining batch would become a streamlined form for carrier service which required certain qualities for over-water work as well as landing and taking-off from carrier decks. The P.10 evolved to become the P.34 project designation and, from this, came the formal designation of "Wyvern TF.Mk 1" (the "wyvern" being a mythical dragon-like creature) being assigned the type.

Westland engineers elected for a largely conventional aircraft configuration featuring a rounded, well-streamlined fuselage, a low-wing monoplane arrangement and traditional tail unit featuring a large-area vertical fin. The undercarriage, to be reinforced for the rigors of carrier service, was of the "tail dragger" arrangement and wholly retractable, a tail hook tucked under the aft section of the fuselage. The cockpit was set just ahead of midships and the engine fitted ahead of the cockpit. A raised canopy shell allowed for excellent vision out-of-the-cockpit for the crew of one. The wing mainplanes offered a folding feature for improved storage aboard the space-strapped British carriers of the period. The end product was a powerful design, dimensionally larger and heavier than any preceding Royal Navy fighter - which was generally a stable of converted land-based fighter types born from the Hawker Hurricane and Supermarine Spitfire (as the Hawker Sea Hurricane and the Supermarine Seafire) beyond some foreign-originated models.

One of the key qualities of the design was its base power measuring over 3,500 horsepower and mated to a contra-rotating propeller arrangement which involved 2 x four-bladed units fitted to an extended spinner at the nose. With the two propeller units taking their place at the front of the fuselage, the standard, fixed armament of 4 x 20mm Hispano cannons were forced into the wings, two guns to a wing. The wings were further strengthened to carry loads bombs and rockets while the centerline under-fuselage position could sport a single torpedo for attacking surface ships. In many ways the Wyvern was shaping up to be a versatile performer.

The end of the war came with the German surrender in May of 1945 and the Japanese surrender in August. Work on the Wyvern continued, however, and a pre-production order for twenty aircraft was announced in August of 1946. By this time, the RAF interest in the Wyvern was given up which ended half of the pre-production contract commitment. A first flight by way of prototype was had sometime later on December 16th, 1946. Six prototypes and six pre-series TF.Mk 1 models were completed though none were to achieve operational status as attention now shifted to a new model fitted with an Armstrong Siddeley "Python" turboprop engine - this form had been in development since even before the TF.Mk 1 made its maiden flight.
Advertisements

Built to Specification N.12/35, "W.35" designated the three prototypes serving the turboprop-powered Wyvern. While the first two of the batch carried the intended Python engine, the third was fitted with a Rolls-Royce "Clyde" engine of 4,500 horsepower. First flight of this design came in January (with Clyde engine) and March (with Python engine) and results were promising on the whole, though there were some issues with controlling which resulted in a larger vertical fin being instituted as well as other minor changes being implemented (such as dihedral being added to the horizontal tailplanes). The Python engine became the engine of choice to power the TF.Mk 2 production models that were to follow the Mk 1.

In 1948, twenty pre-production Mk 2s were ordered and one was converted to a two-seat trainer under the "T.Mk 3" designation which was ordered back in September 1948. By 1950 the "Python 2" engine was introduced with T.Mk 2 and a first flight had on February 16th. The T.Mk 3 followed into the air for the first time that same month. The all-important phase involving carrier deck landings were recorded on HMS Illustrious during June and marked the first turboprop-powered fighter in Royal Navy service to complete the action.

Of the original pre-series order, seven were redesignated to "S.Mk 4" as these carried all of the best qualities showcased by previous marks, by default becoming the definitive Wyvern. By this time, the engine carried was the "Python 3" of 3,670 horsepower and 87 of the mark were taken on by the Fleet Air Arm (FAA), examples beginning to arrive during 1953.

In total, 127 Wyverns were completed for solely British Royal Navy service. Manufacture of the line spanned from 1946 until 1956 but operational service ran only until 1958. Nine total Royal Navy air squadrons featured the Wyvern during its tenure. In service, the aircraft showed a propensity for accidents with flameouts being a constant threat, particularly during the high-speed catapult launches required for carrier duty. On the whole, the aircraft was a tricky and temperamental platform and no fewer than 68 accidents claiming the lives of thirteen were recorded.

The Wyvern's first, and only, combat exposure came during the "Suez Crisis" of 1956 which spanned from October 29th until November 7th and involved Israel, Britain and France against Egypt. At least two Wyverns were lost to enemy ground-based fire in the fighting that followed and the line accounted for 79 total sorties in the conflict.

Shortly after the war, Wyvern's were retired from frontline service and given up for good in 1958. They became the only British turboprop-powered fighter to ever see combat action.
Advertisements

United Kingdom
(OPERATORS list includes past, present, and future operators when applicable)
✓ Air-to-Air Combat, Fighter
General ability to actively engage other aircraft of similar form and function, typically through guns, missiles, and/or aerial rockets. ✓ Ground Attack (Bombing, Strafing)
Ability to conduct aerial bombing of ground targets by way of (but not limited to) guns, bombs, missiles, rockets, and the like. ✓ Close-Air Support (CAS)
Developed to operate in close proximity to active ground elements by way of a broad array of air-to-ground ordnance and munitions options. ✓ Maritime / Navy
Land-based or shipborne capability for operating over-water in various maritime-related roles while supported by allied naval surface elements.

(Showcased performance specifications pertain to the Westland Wyvern S.4 production variant. Compare this aircraft entry against any other in our database or View aircraft by powerplant type)
STANDARD, FIXED:
4 x 20mm Hispano Mk.V cannons in wings (two per wing).

OPTIONAL (as needed):
16 x RP-3 rockets
1 x Mk.15 / Mk.17 torpedo under fuselage
Up to 3,000 pounds of externally-carried drop stores in the form of conventional drop bombs or naval mines.

General Assessment
Firepower
Performance
Survivability
Versatility
Impact
Values are derrived from a variety of categories related to the design, overall function, and historical influence of this aircraft in aviation history.
Overall Rating
The overall rating takes into account over 60 individual factors related to this aircraft entry.
38
Rating is out of a possible 100 points.
Relative Maximum Speed
Hi: 400mph
Lo: 200mph
This entry's maximum listed speed (382mph). 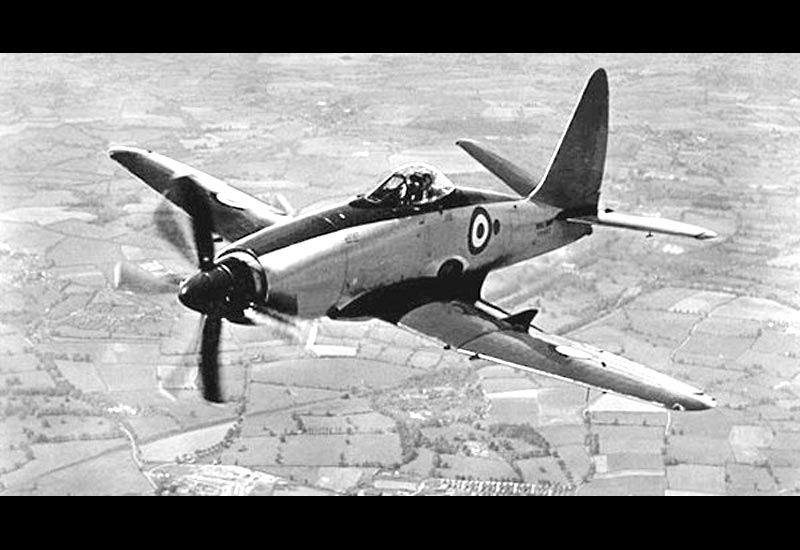