Authored By: Staff Writer | Last Edited: 06/18/2021 | Content ©www.MilitaryFactory.com | The following text is exclusive to this site. 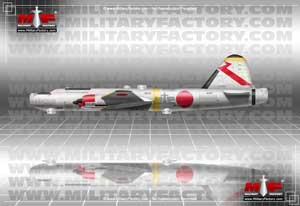 The Kawasaki Ki-91 represented a rare four-engine heavy bomber initiative of the middle-to-late war years for the Japanese Empire. The Ki-91 gained steam at a time when the Japanese military was reeling from consistent losses in-the-field and air supremacy was being lost on a month-to-month basis. It would seem prudent that fighters and interceptors would be the call of the day as it became in Germany but this four-engined "heavy" was still pushed through by Kawasaki.

The design was to feature a wingspan reaching 157.4 feet with a length of 108.2 feet - dimensionally larger than even the famous American Boeing B-29 "Superfortress" (141.2 foot wingspan, 99 foot length). Loaded weight was estimated at 127,870 pounds. The bombload was to be in the 8,820 lb range (decidedly less than the Superfortress' 20,000lb load limit) and the aircraft defensed by no fewer than 12 x 20mm cannons - two fitted to a nose turret, two in a dorsal turret, four across two ventral turrets (one forward, the other aft), and four to complete a turret at the tail - one of the best-armed bombers of the war to say the least. The large aircraft would be powered by 4 x Mitsubishi Ha-214 "Ru" engines developing upwards of 2,500 horsepower each and estimated performance specs included a maximum speed of 360 miles per hour with a ferry range out to 6,215 miles (the B-29 managed a speed of 360mph with a ferry range out to 5,600 miles).

Outwardly, the aircraft was to be given a stepped cockpit approach meaning the flight deck sat out from the fuselage contours and held its own window panels (unlike the streamlined form of the B-29). The fuselage would be a rounded rectangle in profile with slab sides, the shape broken up some by the placement of several observation bubbles about her design. Glazing would be featured at the nose and around the cockpit with vision ports located throughout the rest of the fuselage and at gun positions. Mid-mounted monoplane wings were used, each featuring a pair of engine nacelles along their leading edges. The tail unit would consist of a single, rounded vertical fin coupled to a pair of low-mounted horizontal planes - these surfaces seated ahead of the tail turret. A tricycle undercarriage would be employed which was a departure of the "Tail dragger" configuration of old.

Design work on the aircraft began in May of 1943 and progress was such that by the end of 1944 the first prototype was being built while Kawasaki lines were gearing up for serial production. However, an Allied bombing raid during February 1945 destroyed much of what was to make the Ki-91 possible, forcing the program to be halted and ultimately abandoned in favor of fighters and interceptors to contend with the American B-29 presence over the Japanese homeland.©MilitaryFactory.com
Note: The above text is EXCLUSIVE to the site www.MilitaryFactory.com. It is the product of many hours of research and work made possible with the help of contributors, veterans, insiders, and topic specialists. If you happen upon this text anywhere else on the internet or in print, please let us know at MilitaryFactory AT gmail DOT com so that we may take appropriate action against the offender / offending site and continue to protect this original work.
Advertisements

OPTIONAL:
A bomb load of up to 8,820 pounds held internally.

Ki-91 - Base Series Designation; prototype destroyed in Allied air raid during February of 1945. 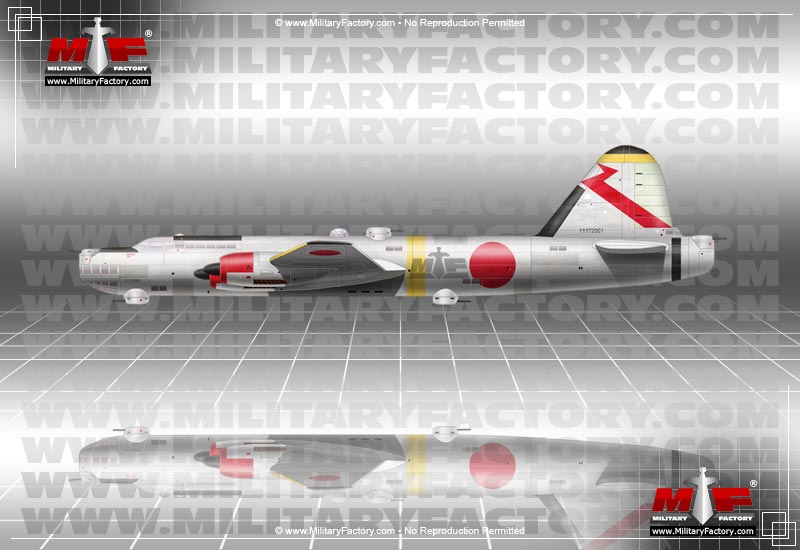