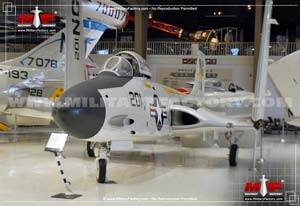 The road to effective carrier-based jet-powered fighters for the United States Navy (USN) was a long and arduous one following the end of World War 2 in 1945. First-fruits included the McDonnell FH "Phantom" which became the first all-jet aircraft to land on the deck of a USN aircraft carrier. A new specification by the service prompted McDonnell to continue their work and, using the FH as the foundation, the company responded with the larger and more powerful F2H "Banshee" series. Unlike the Phantom, which was limited in production due to the end of World War 2 with just 62 units made, the F2H enjoyed considerably more success as some 895 units were manufactured.

The follow-up design was originally on the drawing boards even before the FH had entered serial production for there was a belief that the base design could be improved throughout - such was the changing face of jet-powered aircraft technology at the time. As such, the aircraft was more of an evolution of the existing Phantom at first but the new USN requirement forced changes to be made to produce what was essentially an all-new product line. One of the key improvements was the selection of the Westinghouse J34 series turbojet (over the FH's original J30 models) which promised an increase in overall thrust and, in turn, performance. This engine would be paired within the Banshee design for maximum concentrated output - though at the expense of utilizing two fuel-thirsty powerplants. Output from this engine was 3,000lb of thrust compared to the J30's 1,600lb rating.

The selection of this engine, in its proposed pairing, necessitated a larger, reinforced fuselage and these units would be seated at the wing roots (as part of the wing leading edges), aspirated by triangular intakes and exhausted through circular ports at the wing trailing edges. The pilot's position was aft of the nosecone with a largely unobstructed, tear-drop-shaped canopy offering a commanding view of the action. The wing mainplanes, straight in their general shape with clipped tips, were fitted at midships and low-mounted (the USN service was slow to adopt swept-wing forms). The tail unit consisted of a single rudder fin with mid-mounted horizontal planes. A tricycle undercarriage was used for ground-running and an arrestor hook featured for carrier landings. In the former, a unique arrangement included smaller wheels at the nose leg, fitted forward of the main wheel, to allow the aircraft to "pitch" its nose down to allow for better out-of-the-cockpit vision when ground-running and to improve storage on space-strapped American carriers (for example the nose could be parked under the tail of another Banshee).

Unlike previous USN fighters, which relied on machine-gun-only armament, the Banshee was developed with a nose-mounted battery of 4 x 20mm Colt Mk 16 automatic cannons from the outset offering a considerable forward "punch" against any and all known enemy aircraft. These guns, afforded 220 rounds for the upper set and 250 rounds for the lower set, were useful in strafing ground targets as well. This marked a USN shift away from its commitment to the 0.50 caliber Browning heavy machine gun as standard armament for a fighting platform.

Beyond these features, the Banshee was also completed with cockpit pressurization (for high altitude service), an ejection seat (a feature not found in the FH Phantom), electrically-actuated air brakes and folding wings (another space-saving quality). Wingtip fuel tanks were eventually added to help improved range and underwing support for external munitions followed as well.

The aircraft first appeared as the XF2D-1 in April of 1945, the same month Hitler would commit suicide to help end the war in Europe. Unlike other far-reaching wartime projects, the XF2D-1 was allowed to continue even after the war had ended in September of 1945. A first-flight was recorded on January 11th, 1947 out of the McDonnell facility in St Louis, Missouri and immediately proved itself the future of USN aviation. That same year, the aircraft was redesignated to XF2H-1 and an initial order for 56 examples followed. The first arrived in August of 1948 under the official in-service designation of F2H-1 "Banshee" and these succeeded the Grumman F8F Bearcat prop-driven fighters as primary USN fleet defenders.
Advertisements

Three XF2H-1 / XF2D-1 aircraft were built and all 56 of the contracted F2H-1 models were produced. The latter batch featured the Westinghouse J34-WE-22 turbojet engine of 3,000lb thrust. An improved version, the F2H-2, followed with the aforementioned wingtip fuel tanks in addition to eight underwing hardpoints for the carrying of stores (up to 1,580lb). This model was powered by 2 x Westinghouse J34-WE-34 engines of 3,250lb thrust and production totaled 308 units. Supported armament included 500lb drop bombs and High-Explosive (HE) aerial rockets.

The F2H-3 evolved into an all-weather fighter mount with a longer nose, more internal fuel, external weapons support, revised tail design and APQ-41 radar. Two-hundred fifty of the variant were produced. These later became the F-2C in the 1962 U.S. military restructuring. The F2H-3P was to become its photo-reconnaissance version but this was not follow through with.

The F2H-4 was an improved version of the F2H-3 fighter and this model fitted 2 x Westinghouse J34-WE-38 turbojet engines of 3,600lb thrust (each). Additionally, the APG-37 radar fit was introduced and 150 of the aircraft were contracted for. This version became the F-2D in 1962.

A proposed swept-wing model emerged as the F2H-5 but this design was not furthered.

Only two global operators of the Banshee came to be, the United States and Canada. The Royal Canadian Navy (RCN) made use of the F2H-3 model across three total squadrons (one being a test outfit) and this marked the only jet-powered fighter to be taken on by the service. For the Americans, the Banshee was a standard sight in inventory throughout the 1950s as both the USN and United States Marine Corps (USMC) relied on the type. Twenty USN squadrons were formed around the type and seven USMC squadrons appeared.

Service introduction of the Banshee occurred during August of 1948 and this meant that they were in widespread circulation by the time of the Korean War of 1950-1953. They were used from the decks of American carriers stationed offshore and could provide escort for the larger, lumbering and high-flying American bombers while also support ground forces through on-call tactical strikes (though in most cases limited by bad weather / cloud coverage).

While air superiority lay with the United Nations in the early-going, the Banshee performed to expectations throughout 1950. However all this changed in November of 1950 when the Soviet-built Mikoyan-Gurevich MiG-15 jet-powered fighter (detailed elsewhere on this site) arrived on scene with its swept-back wings and very-high-performance. This placed the Banshee at a decided disadvantage going forward for the straight-winged mount of 1940s vintage could not compete in a head-to-head duel - especially when the MiG-15s were secretly piloted by Soviet airmen. As such, the Banshee was soon relegated to operations closer to friendly forces and left the dogfighting to newer, more advanced gunnery platforms like the North American F-86 "Sabre" (detailed elsewhere on this site). Beyond ground attacks, the Banshee was soon found to be a heady player with the USMC in the realm of photo-reconnaissance where its operational altitude was an advantage.

In the whole of the conflict, of which the Banshee survived from beginning to end in active operational service, no aircraft were lost to enemy fighters. However, the series did not score any air kills itself and some three were lost to ground-based fire. The Korean War marked the only combat action the Banshee family of aircraft would ever see.

In time, the line was succeeded by more capable mounts and the USN and USMC finally began to adopted higher-performance, swept-wing products to keep pace with the enemy. The Banshee existed in the active USN and USMC inventory up until 1959 and reserve units gave up their mounts in 1961. The RCN followed in 1962 formally ending all global use of the type.
Advertisements

General Assessment
Firepower
Performance
Survivability
Versatility
Impact
Values are derrived from a variety of categories related to the design, overall function, and historical influence of this aircraft in aviation history.
Overall Rating
The overall rating takes into account over 60 individual factors related to this aircraft entry.
82
Rating is out of a possible 100 points.
Relative Maximum Speed
Hi: 750mph
Lo: 375mph
This entry's maximum listed speed (581mph). 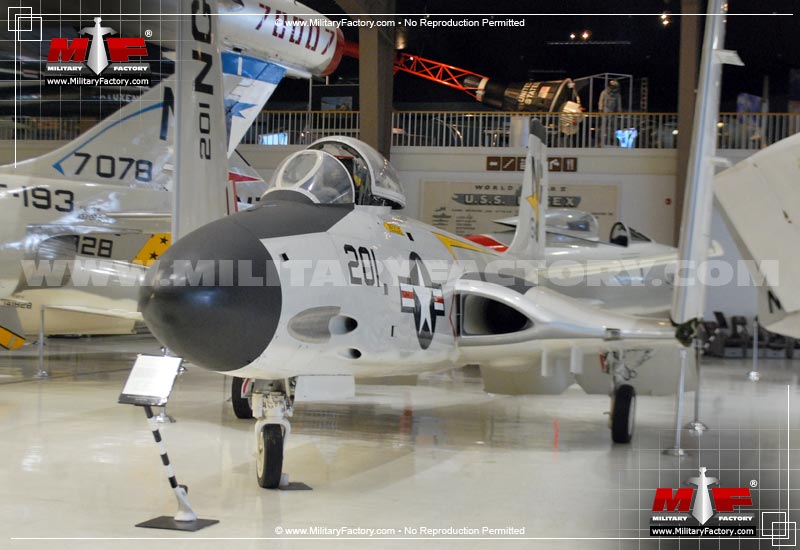 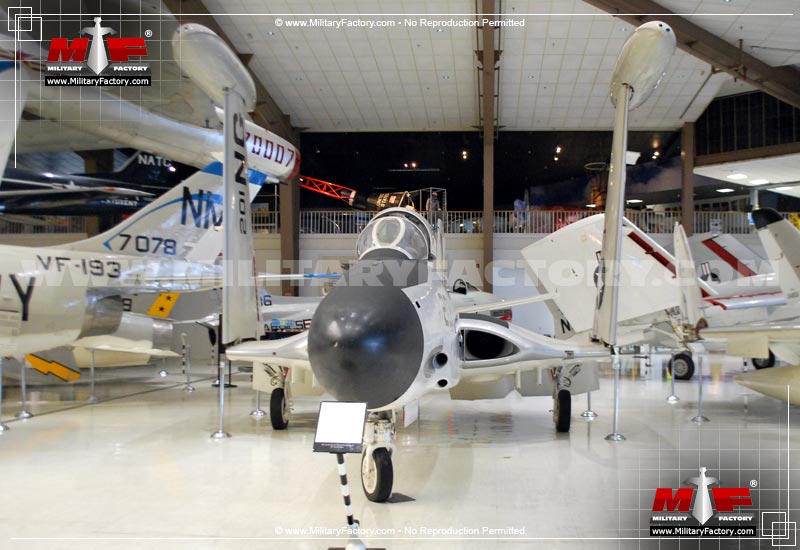 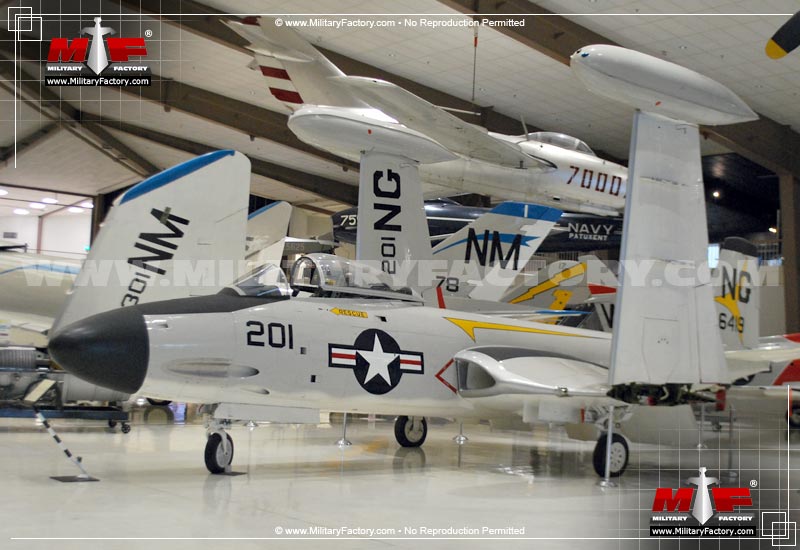 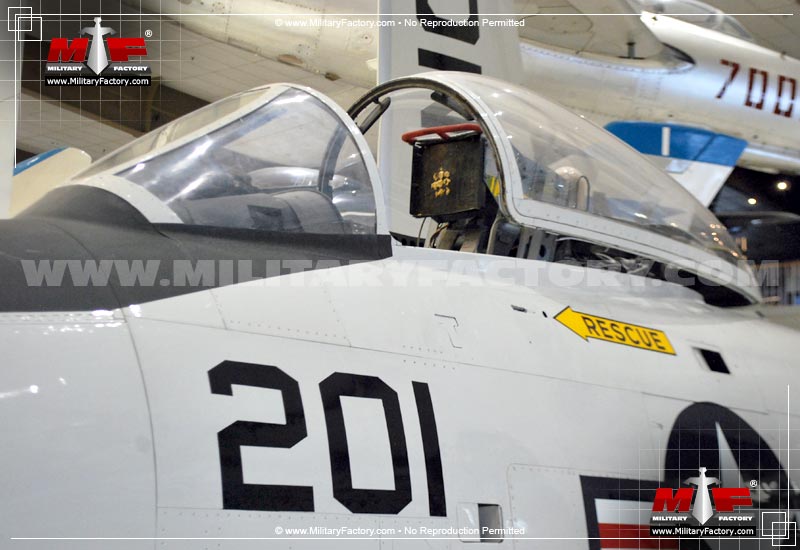 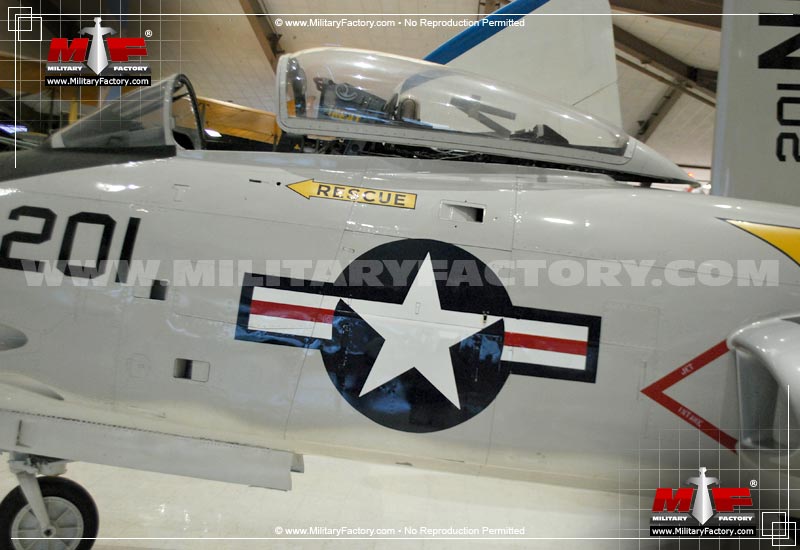 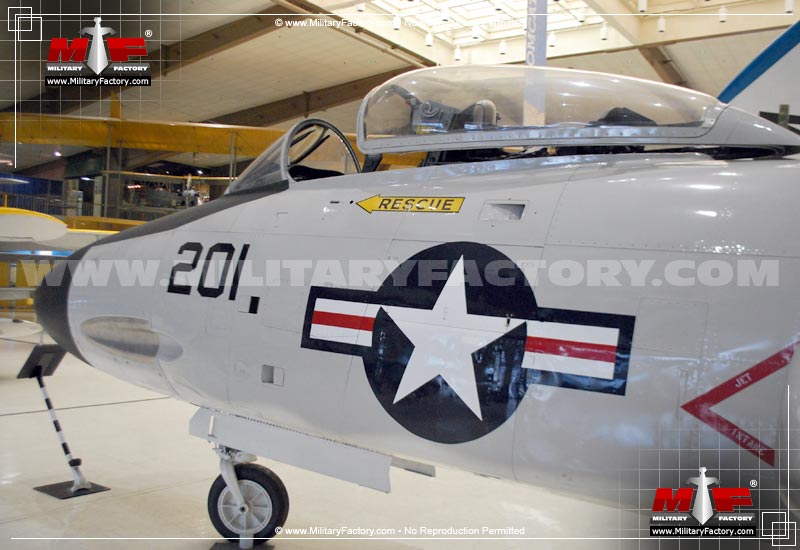 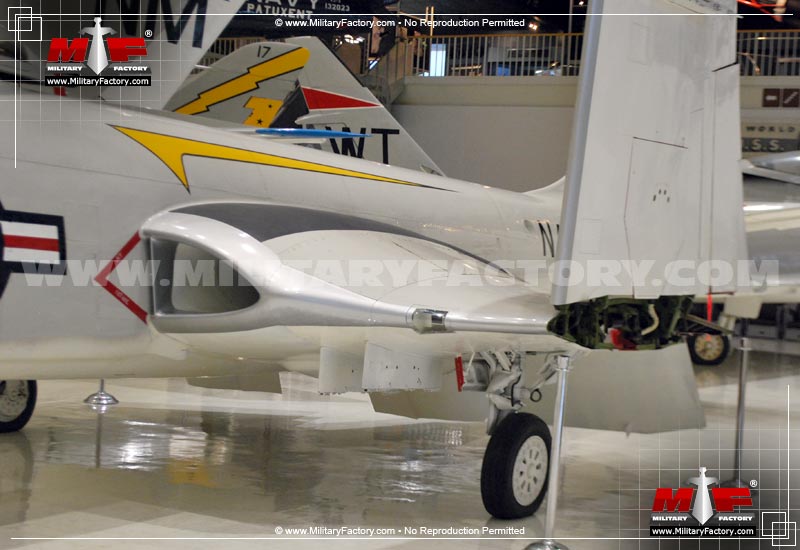 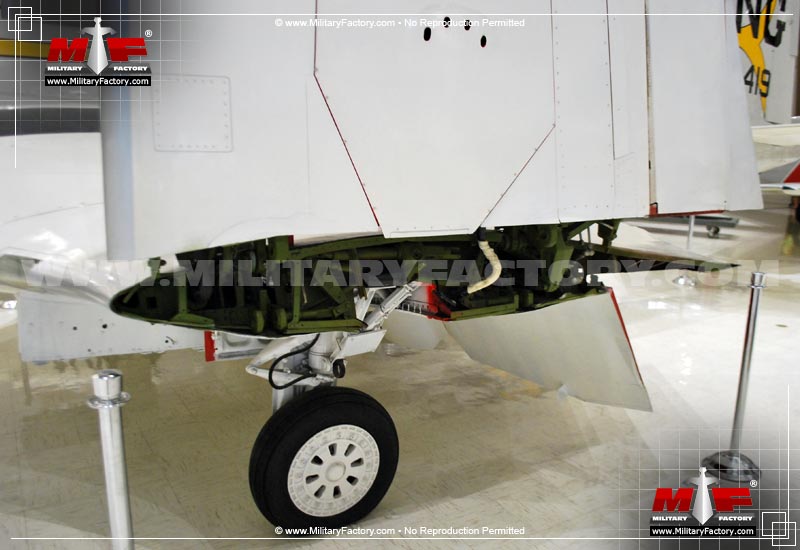 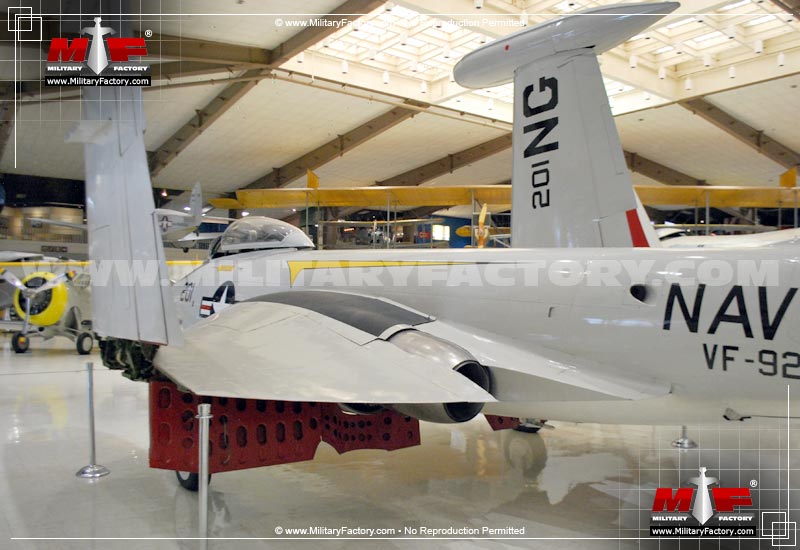 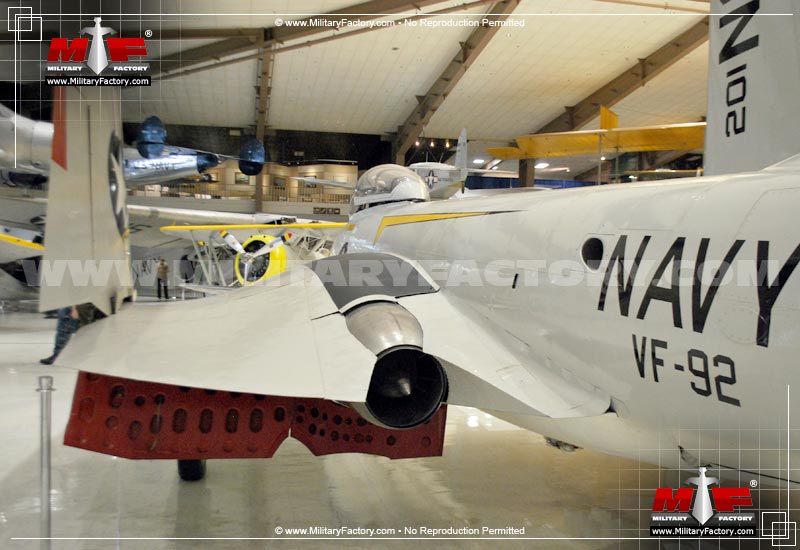 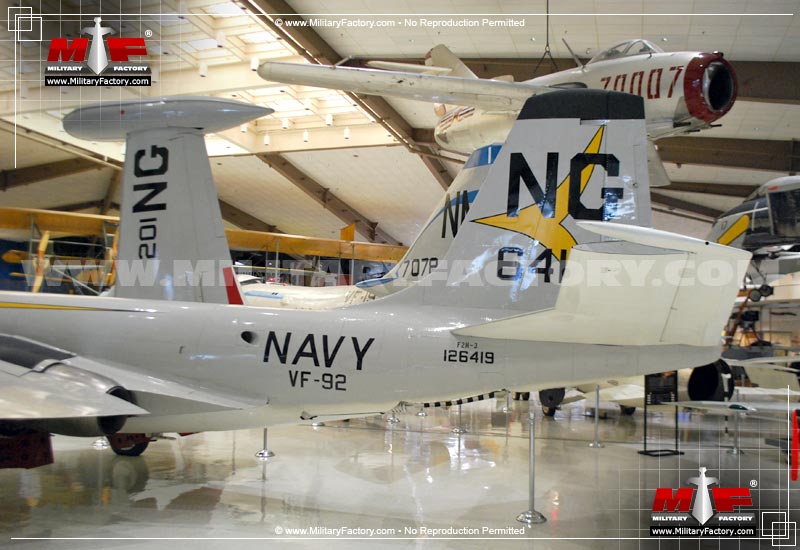 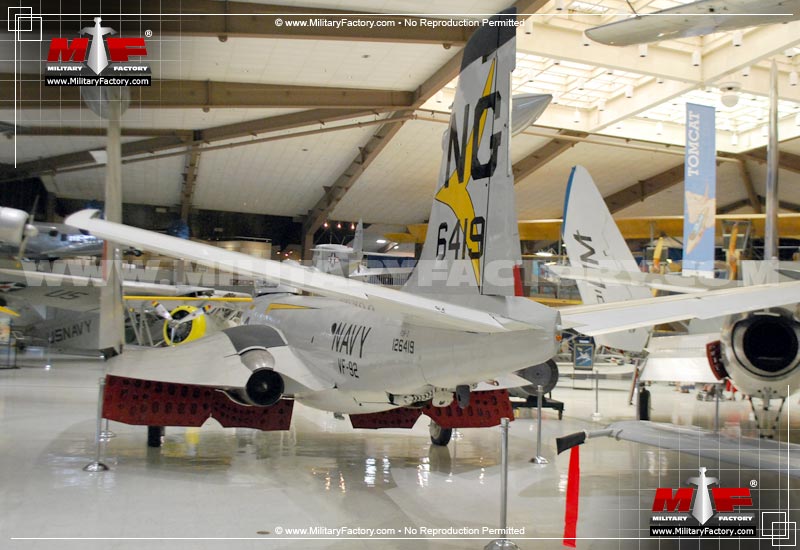 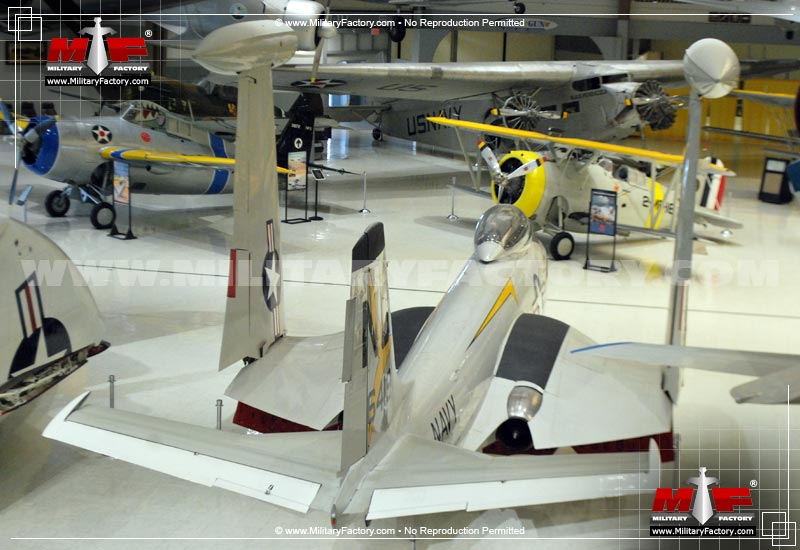 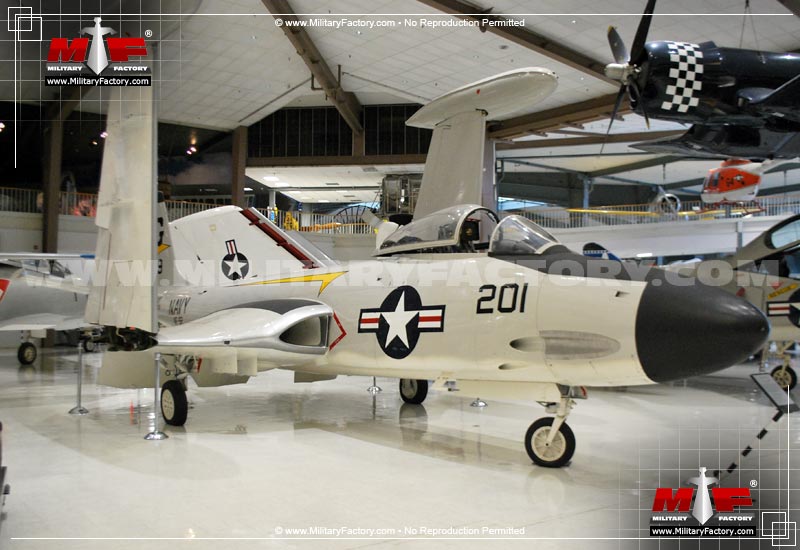 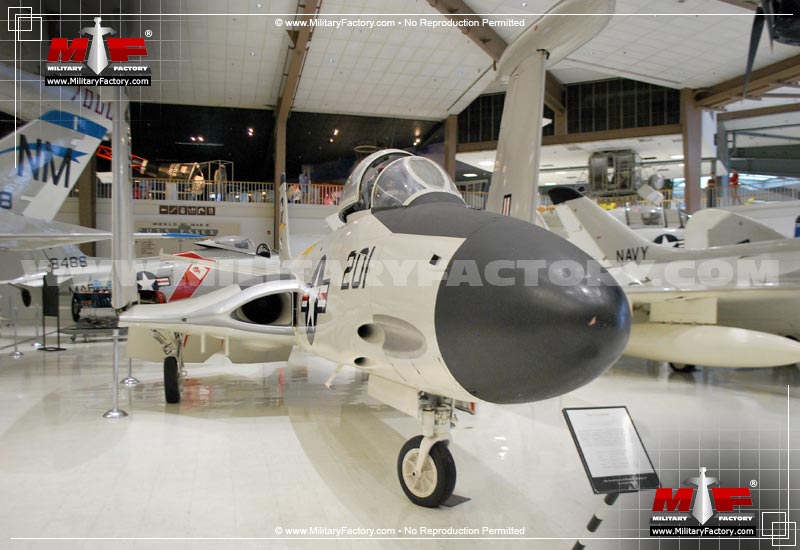