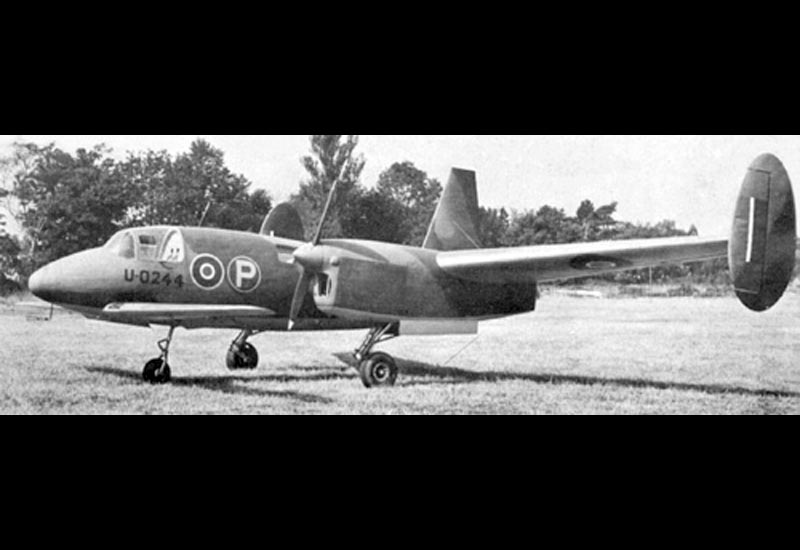 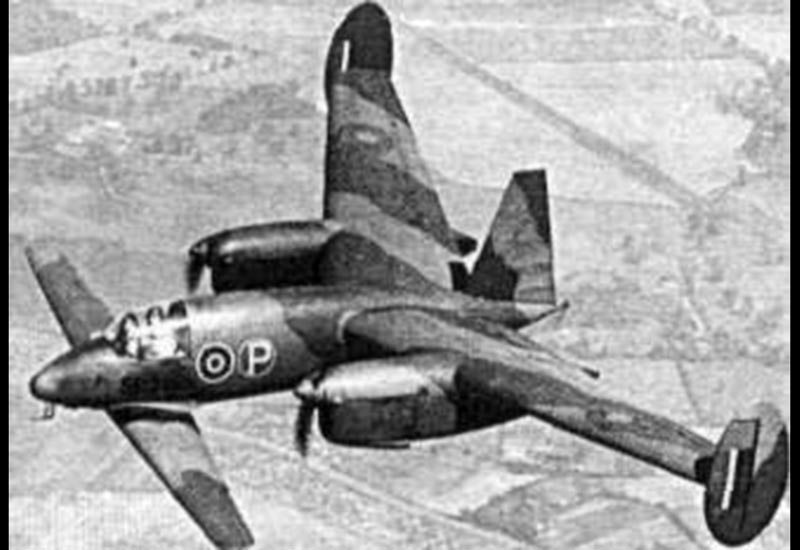 One of the more interesting aircraft arrangements to be considered by the British during World War 2 - the Miles Libellula.

The M.39 "Libellula" was conceived of by the Miles Aircraft concern during the early 1940s as World War 2 (1939-1945) raged on. The initial concept was to reduce the complexity of landing aircraft on carrier decks where vision was largely obscured by the forward-mounted engine and large wing mainplanes. A new approach was undertaken which intended to reduce the risks involved and this became a "tandem-wing" arrangement that ultimately covered a series of concepts for Miles during the war. However, none of the concepts were realized through serial production contracts though M.39B was built and flown as a prototype.

Collectively, the designs making up this Miles endeavor were named "Libellula", the taxonomic family name of the dragonfly (no doubt in reference to the Miles' aircraft use of twin wing mainplanes).

The original work on the subject was through the M.35 offering which was more or less a technology demonstrator for a single-seat naval fighter. It was developed along the lines of a private venture by Miles and its tandem-wing arrangement was used to reassess the Center of Gravity (CoG) seen in traditionally-arranged military aircraft (mainplane at front with tailplanes at rear). The tandem-wing approach allowed for a greater CoG range between the two wing mainplanes in play and could, theoretically, produce some inherent benefits - a shortened fuselage and more contained wingspan for onboard carrier storage (as well as reduced weight), less complex wings as wing-folding mechanisms would not have to be used, and improved control from the "doubling up" of control surfaces along the wing pairing.

Covering the short span of six weeks, Miles engineers returned with the M.35. This aircraft was powered by a single de Havilland Gipsy Major air-cooled inline engine of 130 horsepower and featured a wingspan of 20 feet at the frontal mainplane and 20.5 feet at the rear mainplane. Overall length was 20.3 feet and maximum weight reached 2,000 pounds. The cockpit was held at the extreme forward of the fuselage and offered excellent vision. The frontal wing mainplane was shoulder-mounted and of a straight design whilst the rear mainplane was low-mounted and featured sweepback. Vertical fins were affixed to the rear mainplane's tips. The engine was buried in the rear portion of the fuselage and arranged in a "pusher" configuration. A pseudo-tricycle undercarriage was fitted though a forth leg was situated at the extreme rear to protect the aft sections of the aircraft. In testing the engine proved temperamental and longitudinal control was off. Despite this, the design proved to shed some light on the unorthodox arrangement which would help with future work in the field.

The work was furthered into a new design which was of 5/8th scale and designated as M.39B. The aircraft would serve as a single-seat demonstrator and be powered by a pair of de Havilland Gipsy Major IC air-cooled inline engines of 130 horsepower each - these showcased as outboard nacelles hung under each rear wing mainplane. The frontal mainplane was now fitted low against the sides of the cockpit. The fuselage was given a finely contoured shape from nose to tail. A tricycle undercarriage - now in the traditional sense -was fitted.

Since the M.39B was of a larger project scope, its dimensions was appropriately increased. The wingspans now reached 25 feet at the front set and 37.5 feet at the rear. Overall length was 22.3 feet and maximum weight increased to 3,200 pounds. As built and tested, M.39B was capable of speeds reaching 166 miles per hour from its twin-engine fit and tandem-wing approach. First flight for the M.39B came on July 22nd, 1943. A dorsal fin was later fitted at the fuselage aft for additional control to complete the M.39B's iconic three-finned appearance.

Up until September of 1943, all of the work on the two aircraft, M.35 and M.39B, was as a private venture. From then on, the British Air Ministry decided to offer a formal development contract to Miles. Shortly thereafter, Miles attempted to elicit interest from the United States Army Air Forces (USAAF) who were already considering the homegrown Curtis XP-55 "Ascender" which featured a similar tandem-wing, pusher-engine arrangement and slated as a fighter. The USAAF response was of general disinterest in the Miles product for the XP-55 showcased problems all its own - particularly with stalls and recovery. Only flight-testing was ever reached with the American program and three aircraft built in all.
Advertisements

The M.39B was received by the Royal Aircraft Establishment (RAE) for evaluations and problems persisted from the get-go. A new undercarriage had to be fitted and several accidents kept the machine in constant repair and grounded from useful flying. Overall, handling characteristics were deemed as quite normal for the aircraft despite its unusual arrangement. Landing and take-off required some changes to the usual routine but this was forgivable. Stalling and recovery was as expected.

Back in 1941, the RAF issued a new specification (B.11/41) calling for a medium-class, medium-to-high-altitude, high performance bomber. The Miles response was to offer its M.39 Project, a revised version of M.39B featuring a crew of three in a pressurized cockpit. Power would be from 2 x Rolls-Royce Merlin 61 series inline engines or 3 x Power Jets W.2/500 gas-powered turbine engines. The wingspan was drastically increased to 37.5 feet at the frontal wing and 55.8 feet at the rear pairing. Overall length grew to become 35.9 feet and maximum weight ballooned to 26,750 pounds. Proposed cruising speed was 360 miles per hour and armament was to be 2 x 20mm cannons in the wing roots (one gun per root) with up to 6,000 pounds in bombs carried through an internal bomb bay found at the center of the fuselage.

The B.11/41 specification was eventually fulfilled by the de Havilland DH.99 "Vampire". The Hawker P.1005 was also in the running for a time.

The prototype M.39 high-speed bomber prototype was ordered but never constructed to an issued November 1943 contract. The RAF bomber requirement was fulfilled elsewhere and the M.39 Project terminated along with the M.39B data-collecting aircraft. While surviving the war, M.39B lasted only until 1948 when it was scrapped.

One final proposal related to the Libellula endeavor was the M.63. This aircraft was to instead feature three clustered jet engines in the rear fuselage, doing away with the original design's wing-mounted, prop-driven engine nacelles (as well as the central dorsal fin featured in the M.39B). The result was to be a more streamlined variation retaining all of the capabilities of the M.39 high-speed bomber form and furnished as mailplane - though even this Miles proposal fell to naught.

(Showcased performance specifications pertain to the Miles M.39B production variant. Compare this aircraft entry against any other in our database. View aircraft by powerplant type)
PROPOSED (M.39 Bomber Project):
2 x 20mm cannons in wings (one to a wing).