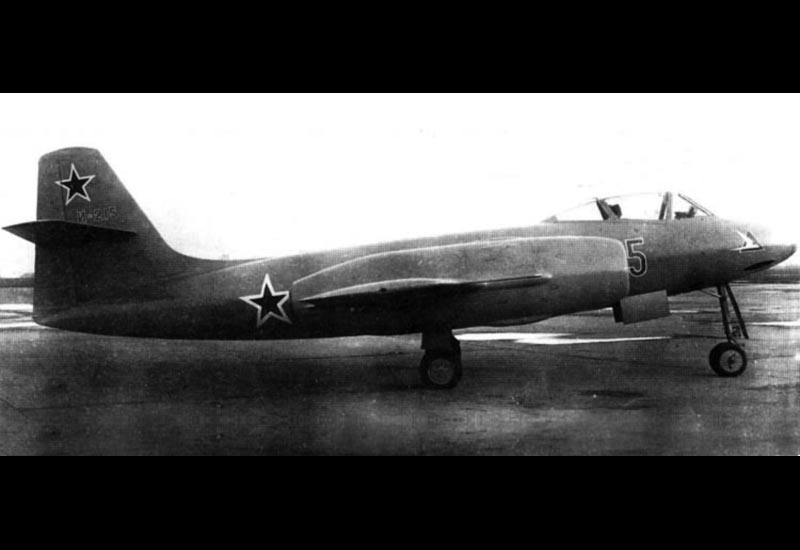 Despite an impressive design, the Alekseyev I-211 was limited by its under-performing turbojet engines and ultimately abandoned.

Authored By: Staff Writer | Last Edited: 05/15/2018 | Content ©www.MilitaryFactory.com | The following text is exclusive to this site.
Like other global powers in the post-World War 2 period, the Soviet Union was hard at work at developing viable jet-powered fighter solutions. Semyon M. Alekseyev earned his stripes during the war as one of the primary people at Lavochkin and the company became responsible for such critical contributions as the LaGG-3, the La-5 of 1942, the La-7 of 1944 and the La-9 series. The Lavochkin brand became as well-known as any other in Soviet history before the end, joining such storied names as Mikoyan-Gurevich and Ilyushin in support of the air war against Germany.

Following the war, Alekseyev established Alekseyev OKB during September of 1946 and work immediately began on a new single-seat, twin turbojet-powered all-metal fighter-interceptor. The design mimicked some of what made up those desperate fighters being designed by German engineers in the late stages of World War 2: the fuselage was centralized and housed the avionics fit, fuel, and armament while the cockpit was fitted well-forwards and under a useful bubble-style canopy offering excellent all-around vision. A rounded nose cone was fitted at front and the fuselage tapered to the rear where a traditional tail unit was fitted. This unit featured a single vertical surface with mid-mounted horizontal planes. The wing mainplanes were, themselves, straight appendages - the spans driving through the engine nacelles which extended from the leading and trailing edges as in the British Gloster Meteor jet fighter series. The undercarriage was wholly retractable and of a tricycle arrangement - each leg double-tired for robustness.

The engine of choice became a Lyulka TR-1 axial-flow unit outputting at 3,010 pounds thrust. This engine was the first indigenous Soviet jet engine and was eventually fitted to only a handful of applications beyond the Alekseyev aircraft - the Sukhoi Su-10 and Su-11 designs both carried it. Development of the engine began during the war in 1944 and produced the "S-18" to which the "TR-1" became its operational designation. This powerplant was never to meet its lofty expectations but it was what was available to Soviet aeronautical engineers of the period.

Proposed armament for the fighter-interceptor was intended to be 3 x37mm cannons with 2 x 57mm cannons - giving the aircraft a considerable frontal array against enemy bombers. Due to issues throughout the life of the Alekseyev aircraft these guns were never fitted.
The initial version of the line to appear was the I-210 and this was fitted with 2 x Tumansky RD-20 turbojets, Soviet copies of the German wartime BMW 003 turbojet which were temperamental offerings limited in power. This model was not furthered as Lyulka finally released their TR-1 series engines for use and this produced the I-211 designation which made its maiden flight during the fall of 1947. However it was soon found that the TR-1 turbojets were under-performing which, in turn, made for a very heavy aircraft - particularly for one earmarked as a dogfighter - although handling was found to be sound despite the limited power available.

To offset the TR-1's limitations, Lyulka moved on their TR-1A turbojet which promised 3,318 pounds of thrust but before these could be used, Alekseyev had secured a pair of British Rolls-Royce "Derwent V" turbojets to begat the I-215 designation. Other variants of the line included the I-211S which featured swept wing and tail surfaces for improved aerodynamics. The I-215D was an I-215 offshoot ordered by OKB-1 and featured a "bicycle" undercarriage. The I-216 was a proposed heavy fighter offshoot based on the I-215 and armed appropriately with 2 x 75mm autocannons, these fitted to slightly modified wings.

As the TR-1A engines were ultimately discontinued due to high fuel consumption, Alekseyev sought to further the I-215 along its own lines. However, Stalin forced Alekseyev OKB to be disbanded following comments made during a Kremlin meeting. This ended all work on the I-211 and the related I-215 products - as such, neither aircraft was ever formally flight-tested en route to possible serial production.

(Showcased performance specifications pertain to the base Alekseyev I-211 production variant. Compare this aircraft entry against any other in our database. View aircraft by powerplant type)
PROPOSED (Never Fitted):
3 x 37mm cannons
2 x 57mm cannons