The Douglas F6D Missileer became a far-reaching program for the USN that came to naught - but benefited other subsequent programs. 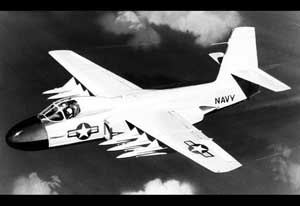 As missile technology began to progress in the 1950s, the United States Navy began looking at plans to provide a new type of carrier-based fleet defense fighter apart from the previous approach of using dedicated high-speed fighter/interceptor types. The idea combined a large, subsonic performance aircraft with a highly-advanced missile and radar system - the aircraft essentially a "missile carrier" (also called a "Missileer") to combat inbound aerial threats. While lacking the straight-line speed of its faster brethren as well as inherent dogfighting capabilities, this aircraft would showcase excellent range and loitering qualities to help it remain on station for far longer and deliver its missile payload at range. This reduced the risk of fast enemy aircraft attempting to assail carrier groups before interceptors could be dispatched against them.

In 1959, the USN delivered a formal requirement for such a platform. Due to the technology needed, the project would involve a combination of very advanced systems and subsystems attempting to work in concert - relying on powerful radar and a dedicated crewman simply for its function. The combination radar/missile approach allowed a track / engage function against enemy elements far Beyond Visual Range (BVR), providing a distinct advantage to the Missileer platform. The Air-to-Air Missile (AAM) missile to be developed for the program was the AAM-N-10 "Eagle" by the Bendix company coupled to the AN/APQ-81 series radar fit to be developed by Westinghouse. As the aircraft would not hold the capabilities to be its own Early Warning (EW) platform, a second design was cleared for development and this became the Grumman W2F "Hawkeye" of 1964.

Douglas Aircraft was selected for design and development of the missile carrier aircraft in 1959. Its engine fit would be the new Pratt & Whitney turbofan becoming the JTF10A/TF30 (the same engine to power the General Dynamics F-111 ""Aardvark", Grumman F-14 "Tomcat", and Vought A-7 "Corsair II" aircraft to come). Engineers utilized a wide fuselage to carry the required fuel loads and house the side-by-side engine pairing. Similarly the cockpit, fitted aft of a short, rounded nose cone assembly, fitted its twin crew in a side-by-side seating arrangement. The engines were aspirated by square intakes aft of the cockpit along the fuselage sides. The wing appendages were straight - as a subsonic design, sweptback wings were not a requirement - and each allowed for three hardpoints for a total of six Eagle missiles to be carried. The empennage was conventional featuring a single vertical tail fin and low-mounted horizontal planes, the latter clearing the jet exhausts which ended well-ahead of the tail unit. In many respects, the aircraft borrowed much of its design form from the earlier Douglas F3D "Skyknight" subsonic fighter of 1951 (detailed elsewhere on this site).
Advertisements

The aircraft was designated as the F6D "Missileer" and its prototype form was to carry the marker of "XF6D-1".

From the outset, the Missileer program was a reach, mainly due to the advanced technologies in play. This product combined many all-new systems in the hope of fulfilling what was essentially an all-new battlefield approach to fleet defense. Beyond the technologies at play, the project also showcased tactical issues in its very concept - once the Missileer had expended its missile load it was essentially powerless against foes having managed to escape its initial attack - even carrier-based fighters of the day still retained an onboard cannon for close-in work, a feature the F6D was to lack. The project was formally scrapped in December of 1960 though some of its components were allowed to endure.

The F6D's technologies - particularly its TF30 engines - forged on and found use in subsequent designs. When the F-111B, a proposed navalized interceptor version of the interdictor-minded F-111A "Aardvark" failed to materialize, the role of fleet defense fighter fell to the classic Grumman F-14 "Tomcat" of 1974. Over seven hundred of the swing-wing aircraft were produced, coupling powerful radar with the equally-powerful long-range AIM-54 "Phoenix" air-to-air missile.

While the Missileer program was itself eventually killed off, its contributions to other realized programs became readily apparent.
Advertisements 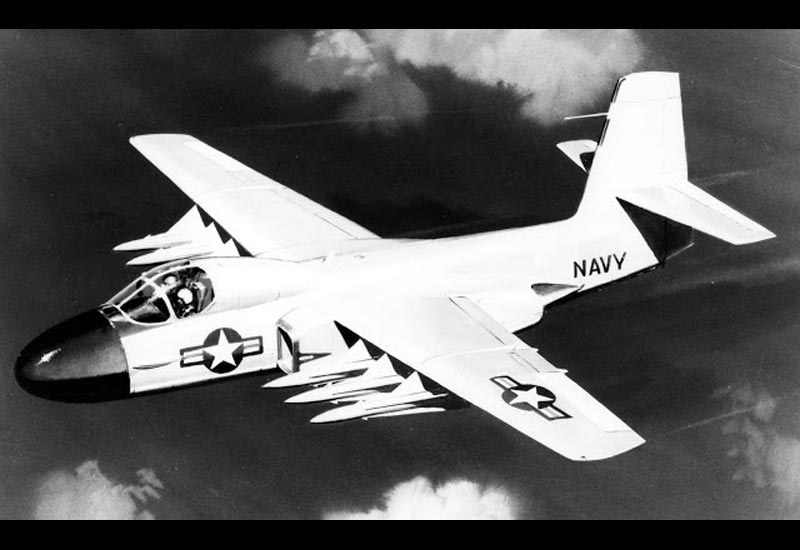