Authored By: Staff Writer | Last Edited: 10/28/2020 | Content ©www.MilitaryFactory.com | The following text is exclusive to this site. 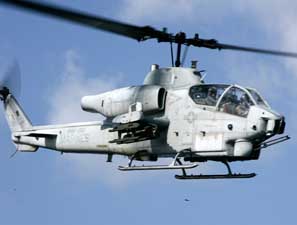 The AH-1 "SuperCobra" is a further evolution of the original Vietnam War-era AH-1 "Cobra" born in the 1960s. The SuperCobra is differentiated primarily by its twin-engine configuration compared to the single-engine nature of the Cobra system. The SuperCobra achieved its first flight in 1969 and entered service (as the AH-1J) in 1971. This was followed by the modernized AH-1W in 1986. To date, some 1,270 examples have been produced and the type stocks the inventories of the United States (Marines), the Iranian Army, South Korea, Taiwan and Turkey. The AH-1W is being superseded by the newer AH-1Z "Viper" standard.

Outwardly, the SuperCobra family retains much of the external appearance of the original Cobra design including its two-person, stepped cockpit creating a slim profile when viewed from the front. The powered, chin-mounted turret has also been carried over as had the Cobra's fixed, skid landing equipment. The pilot is seated in the rear, elevated cockpit with the weapon's officer in the front cockpit (flight and weapons controls are doubled). The engine pairing drives a two-bladed main rotor and two-bladed tail rotor (the latter affixed to the starboard side of the vertical tail fin. Like the Cobra, the SuperCobra can undertake a variety of battlefield roles that go beyond its base anti-armor capabilities. It can be used in close support of friendly forces, support special forces operations and provide security for convoys. Armed reconnaissance allows the aircraft to both track and engage unsuspecting foes at range through cannon fire, rockets and missiles.

The SuperCobra is outfitted with a 20mm M197 3-barreled Gatling cannon fitted to a powered M97 turret assembly under the nose as standard. This system is afforded 750 rounds of 20mm projectiles. The SuperCobra is also cleared to fire 2.75" (70mm) Mk 40 or Hydra 70 series rockets from multiple-shot pods. It can replace these with the larger 5" (127mm) "Zuni" series rockets fired from four-shot LAU-10D/A series launcher systems. Anti-armor sorties are managed by TOW missile launchers (four-shot launchers) and AGM-114 "Hellfire" anti-tank missiles (M272 launchers). MIssiles are limited to the outboard underwing hardpoint. To counter low-flying aerial threats, the platform can also field the AIM-9 Sidewinder short-range missile at each wingtip. External fuel tanks can also be fitted to help improved operational ranges.

The AH-1J SeaCobra was fitted with a single Pratt & Whitney Canada T400-CP-400 series turboshaft engine (PT6T-3 "Twin Pac") of 1,800 shaft horsepower driving a two-blade main rotor and two-blade tail rotor. This provided the mount a top speed of 220 miles per hour, a cruising speed of 175 miles per hour, a range of 360miles and a service ceiling of 10,500 feet. Rate-of-climb was listed at 1,090 feet per minute.

The newer AH-1W SuperCobra sported 2 x General Electric T700-401 turboshaft engines for an output of 1,690 shaft horsepower each. This arrangement also drove a two-bladed main rotor and two-bladed tail rotor. Straight line performance remained the same though range was increased to 365 miles, the service ceiling raised to 12,200 feet and rate-of-climb increased to 1,620 feet per minute.

The Model 309 "King Cobra" was a development based on previous AH-1 offerings intended for all-weather operation. Two prototypes were eventually produced, each with differing engines. The "CobraVenom" was a SuperCobra offering proposed to the British Army. Similarly, Romania was showcased the AH-1RO development and the AH-1Z "King Cobra" was destined for Turkey (existing AH-1 users) to fulfill its ATAK attack helicopter program requirement.

Iran procured a stock of AH-1 SuperCobras while the United States and Iran held a political relationship leading up to the fall of the Shah in 1979. These were then upgraded under the Panha 2091 designation and eventually evolved into the modern Iranian Army IAIO "Toufan" series which more or less appears as a SuperCobra though internally outfitted with Iranian avionics and weaponry.

The primary American operator of the AH-1 SuperCobra is the United States Marine Corps. The aircraft has been used by groups HMLA-167, HMLA-169, HMLA-269, HMLA-367, HMLA-369, HMLA-467, HMLA-469, HMLA-773 and HMLAT-303.©MilitaryFactory.com
Note: The above text is EXCLUSIVE to the site www.MilitaryFactory.com. It is the product of many hours of research and work made possible with the help of contributors, veterans, insiders, and topic specialists. If you happen upon this text anywhere else on the internet or in print, please let us know at MilitaryFactory AT gmail DOT com so that we may take appropriate action against the offender / offending site and continue to protect this original work.

(Showcased performance specifications pertain to the Bell AH-1W SuperCobra production variant. Performance specifications showcased above are subject to environmental factors as well as aircraft configuration. Estimates are made when Real Data not available. Compare this aircraft entry against any other in our database or View aircraft by powerplant type)
STANDARD:
1 x 20mm 3-barreled Gatling gun in powered chin turret. 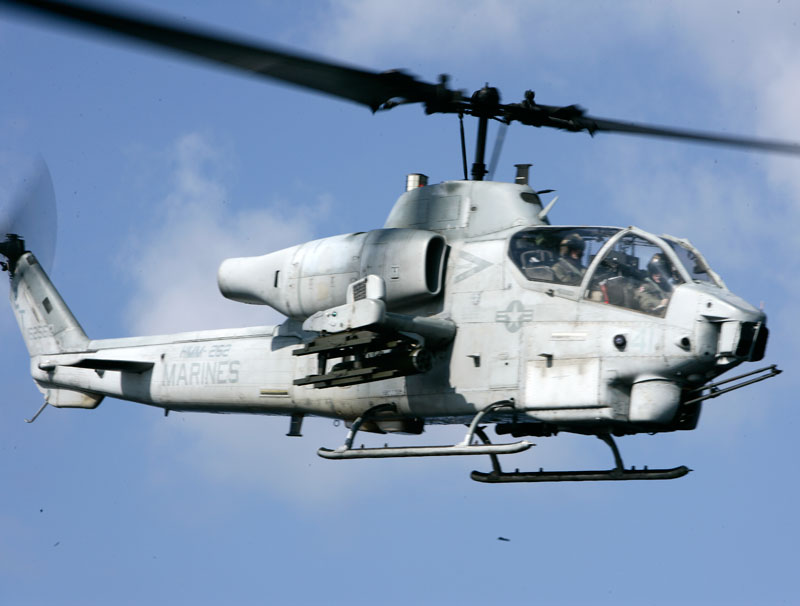 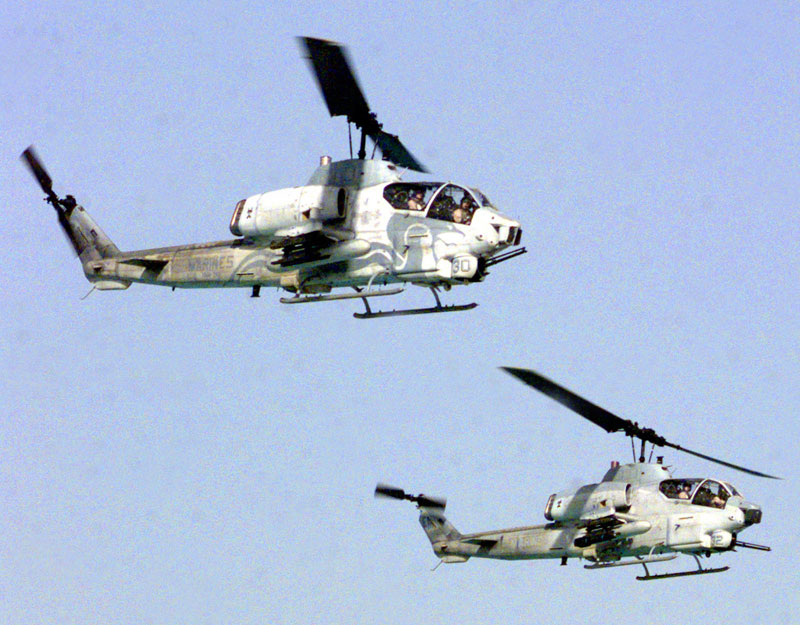 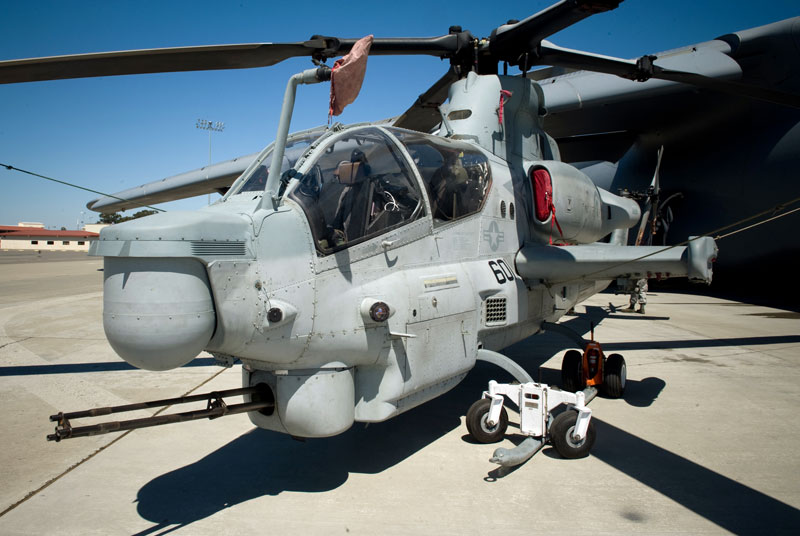 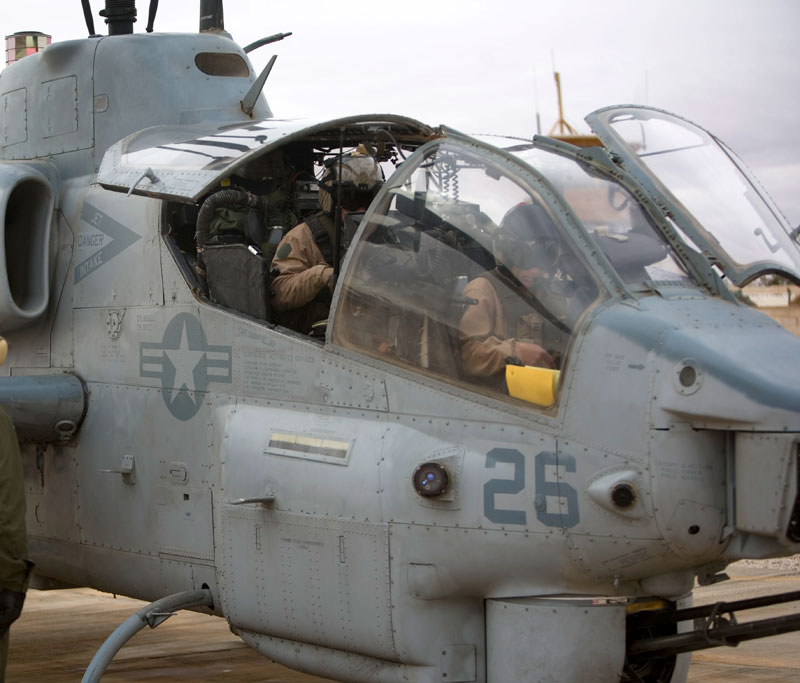 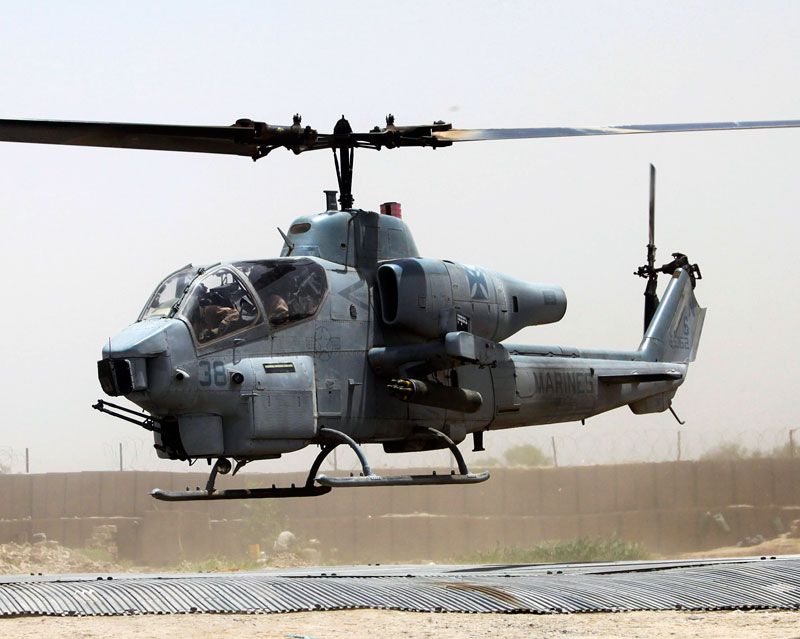 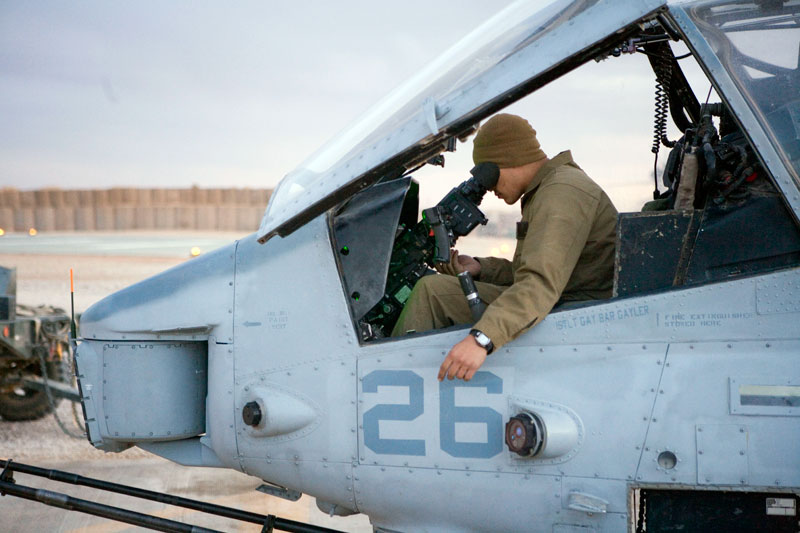 Side profile close-up detail view of the forward cockpit on a Bell AH-1 SuperCobra attack helictoper; the crewmember peers down the weapons scope
7 / 15 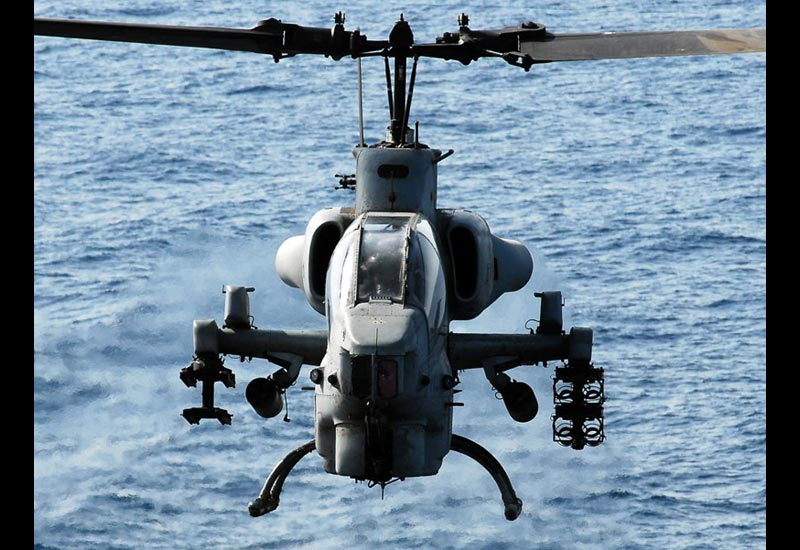 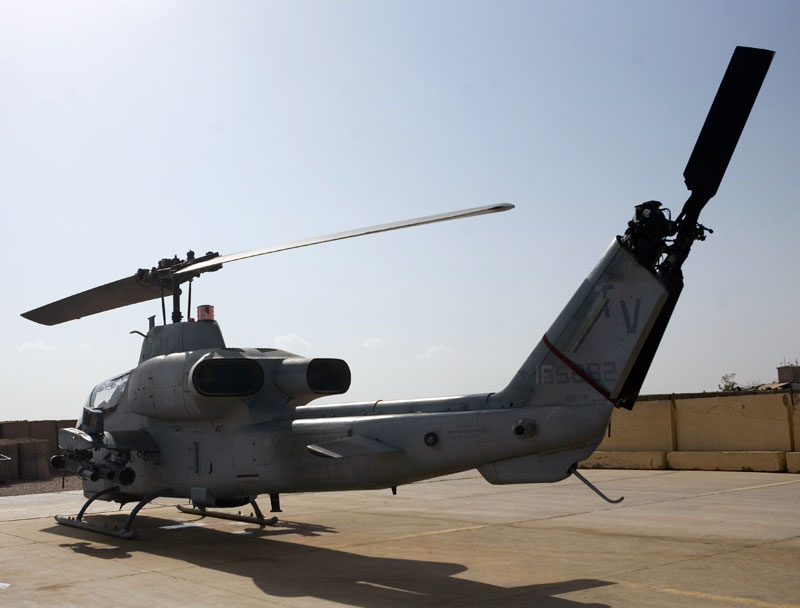 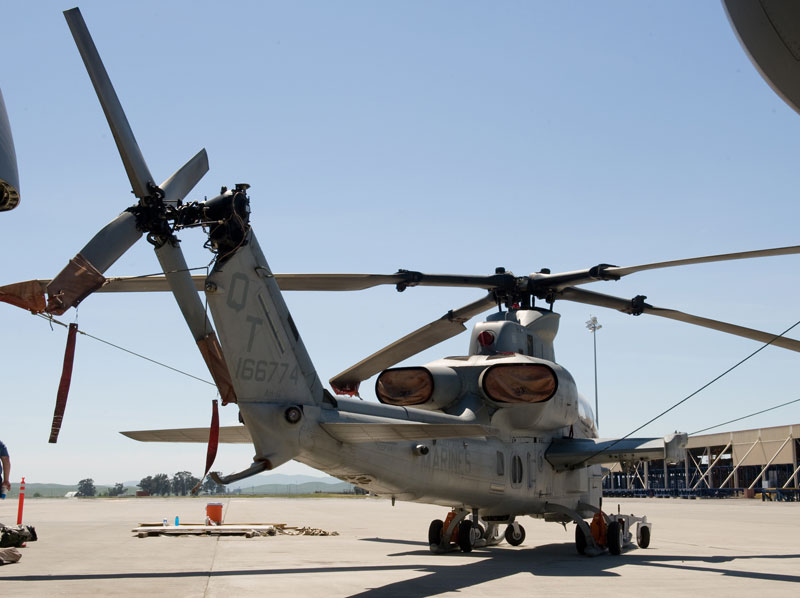 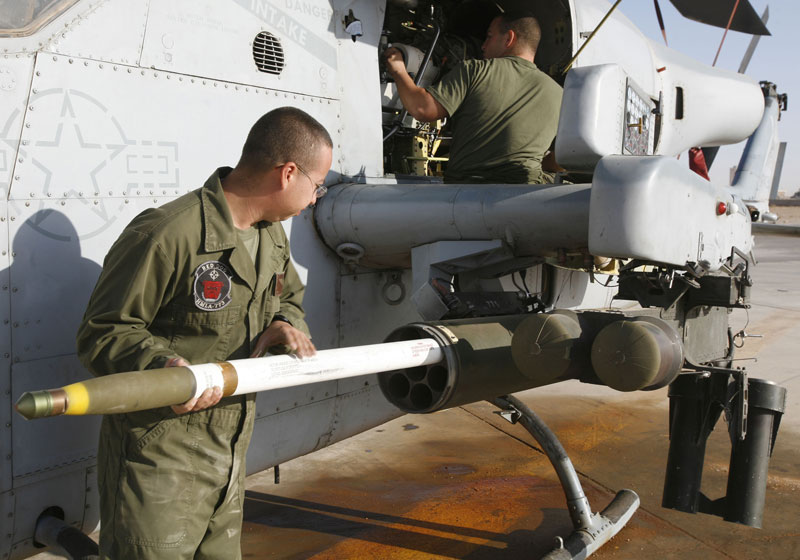 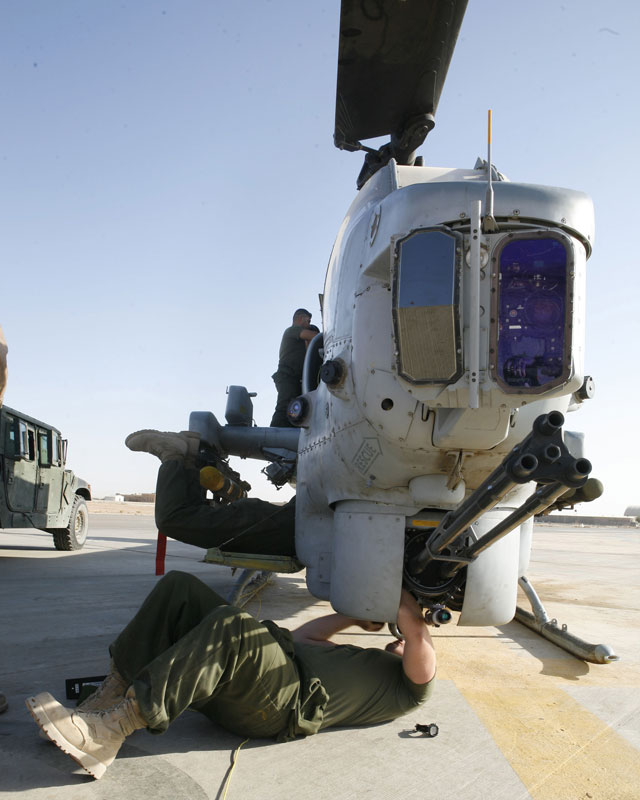 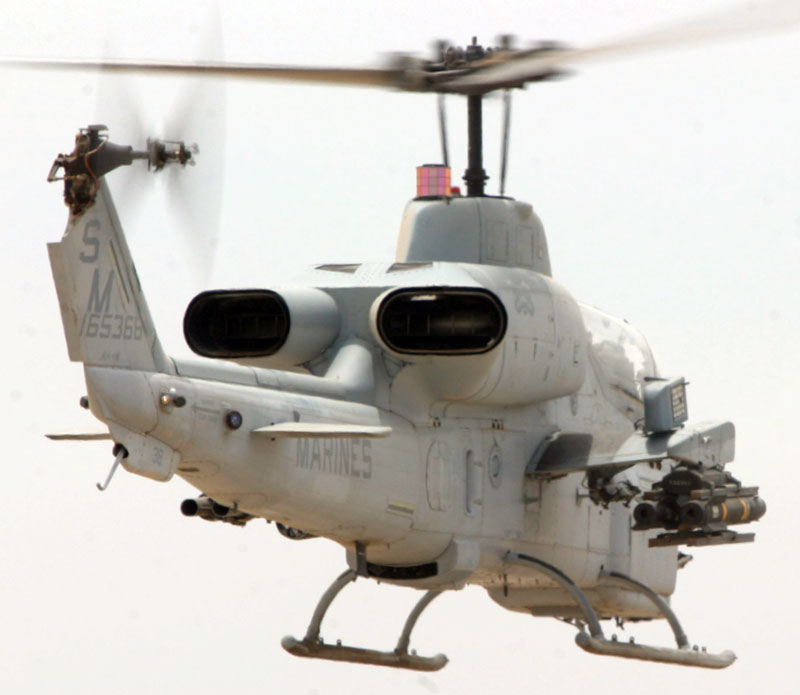 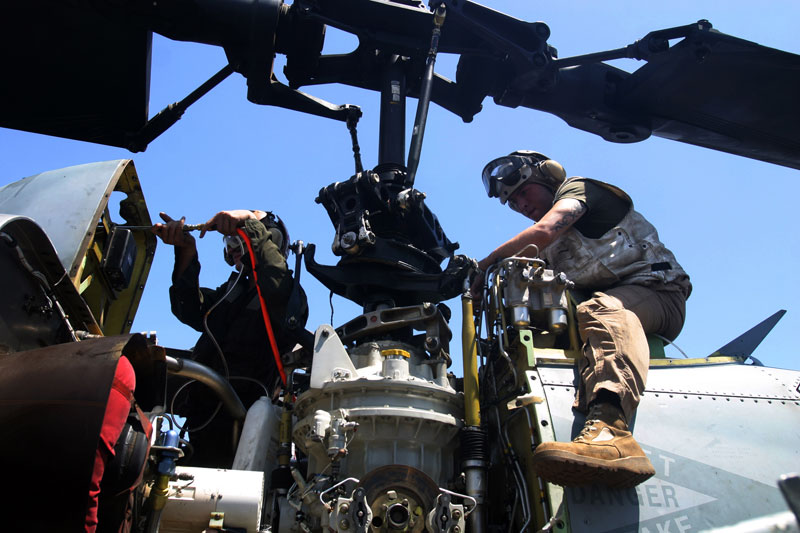 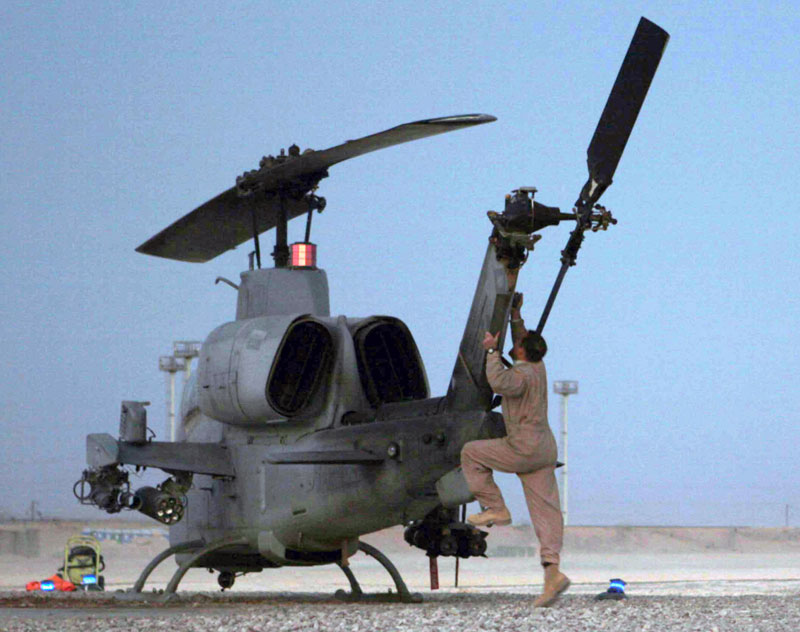 A Bell AH-1 SuperCobra attack helictoper is armed and fueled for the next sortie; note Hellfire missiles and rocket pod armament
15 / 15 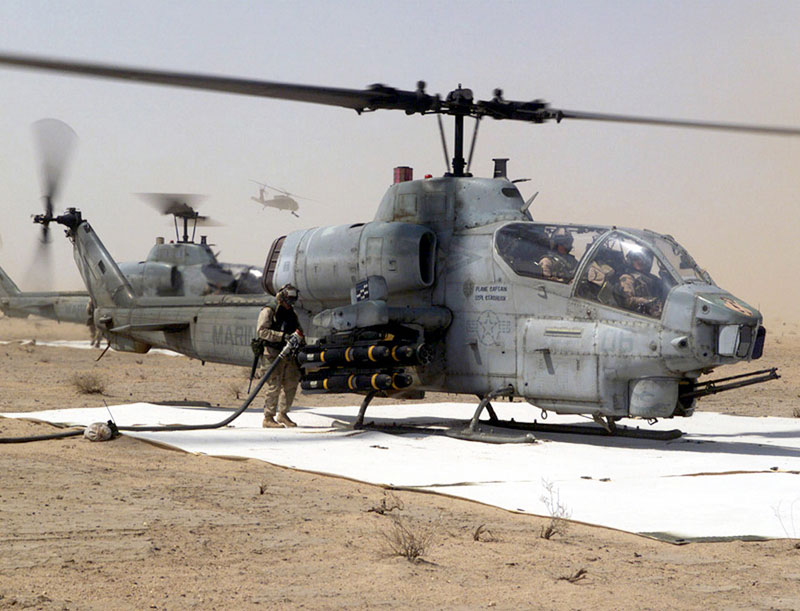