Authored By: Staff Writer | Last Edited: 05/03/2021 | Content ©www.MilitaryFactory.com | The following text is exclusive to this site. 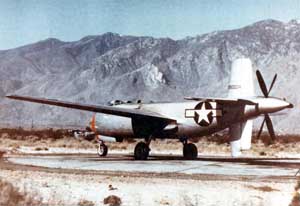 World War 2 (1939-1945) provided American aeronautical engineers with something of a blank canvas when attempting to sell the U.S. military on new aircraft endeavors. Many companies saw fit to undertake private venture projects to help further their chances in making a potentially lucrative sale and such was the case with Douglas Aircraft Company and their XB-42 "Mixmaster" medium bomber proposal. Medium bomber types were still in demand with American warplanners during the conflict and also provided a "bridge" platform between light attack models and multi-engined "heavies" then in service.

The XB-42 proposal was directed at the United States Army Air Force (USAAF) in May of 1943. The design attempted to streamline the existing bomber design approach by mounting its two powerplants inline and at the rear of the fuselage. This left the frontal and middle sections of the fuselage free for crew spaces, defensive armament, and ordnance-carrying options. Similarly, the wings were devoid of any drag-inducing obstructions. Douglas' idea was to fit the two engines, each driving separate propeller units in a contra-rotating fashion, to help offset inherent torque effects and direct propulsion along a more singular path behind the aircraft. Rear-mounted propeller aircraft were nothing new - recognized as "pusher" types - but were unconventional to the more traditional "puller" types that saw their propeller systems mounted at the nose of the aircraft. The engines of choice became two Allison V1710-125 12-cylinder liquid-cooled systems with each engine outputting at 1,325 horsepower.

Dimensions included a length of 53.7 feet, a wingspan of 70.5 feet, and a height of 18.9 feet. A standard crew would be three to include the pilot, copilot, and a dedicated bombardier. The copilot doubled as a gunner. Proposed defensive armament was to include six total 0.50 caliber heavy machine guns set across two twin-gunned, rear-facing mounts at the wing trailing edges and a two guns in fixed, forward-firing mounts. As it was expected that the XB-42 could outrun any interceptor, defensive armament could be kept to a minimum. The internal bomb load was rated up to 8,000 pounds.

The fuselage took on a rather 1950s jet aircraft approach in spite of its 1940s origins. It was well-streamlined from nose to tail with the nose containing the bombardier's position under heavy Plexiglas. The pilot and copilot sat under a "double-bubble" canopy over the nose with a commanding view about the aircraft - their seating was side-by-side. The empennage tapered towards the engine mounts and a cruciform tail plane arrangement was used (dorsal, ventral, and horizontal planes in play). To help clear the ventral tail plane, a tricycle undercarriage was fitted - novel for a time when "tail draggers" were still the norm.

A proposed dedicated attack form, known as the XA-42, intended to feature some sixteen total machine guns with a covered nose section deleting the bombardiers position. Other proposed armament for this model was 1 x 75mm cannon with 2 x 12.7mm heavy machine guns.
Advertisements

The USAAF contracted for a pair of prototypes under the "XB-42" designation (s/n 43-50224 and 43-50225). Douglas engineers responded quickly with a flyable prototype which first took to the air on May 6th, 1944 and the other prototype was set aside to be fitted with Westinghouse turbojet engines at the USAAF's request. It became immediately apparent that the double-bubble canopy interfered with communication between the two pilots so a single, smooth bubble canopy took its place which also added additional streamlining. Other issues involved the aircraft's design itself which proved unstable in certain flight envelopes. Power from the inline engine arrangement was quite sound however - as fast as any conventional two-engined mount seen in the war to this point.

The XB-42 program then came under threat with the end of the war in August of 1945 which also ended up threatening just about every program still in development. Adding insult to injury, the jet age was dawning as piston-powered prop aircraft were seeing their technological apex. Rather than put more funding into piston-powered types, the U.S. military favored development of purely jet-powered aircraft for the long-term. Despite this, work on the XB-42 continued to an extent as a December 1945 endeavor saw a record-setting flight accomplished from Long Beach, California to Washington, D.C. covering some 2,300 miles in under 5.5 hours while tipping the speed scales at 433.6 miles per hour.

The other prototype was outfitted with 2 x Westinghouse 19XB-2A turbojet engines of 1,600 lb thrust each and, to differentiate the from the prop-powered model, the designation of "XB-42A" was assigned. Interestingly, the inline propeller engines were retained at the rear of the fuselage. First flight of the jet-powered aircraft was on May 27th, 1947 and managed to reach a maximum speed of 488 miles per hour. A hard landing during testing damaged the tail unit enough to ground the aircraft for a time. Though repaired, the aircraft was no longer an interest to U.S. military authorities during the massive post-war drawdown - also more dedicated turbojet designs were in the works that promised increased performance gains. Prototype s/n 43-50225 was lost to an accident at Bolling Field leaving just s/n 43-50224 intact.

The XB-42 program was officially cancelled in 1948.

Unlike many other prototype aircraft witnessed after the war which were scrapped, s/n 43-50224 survived the test of time and currently awaits its turn at restoration through the National Museum of the United States Air Force of Dayton, Ohio.
Advertisements

PROPOSED (Optional):
Up to 8,000lb of conventional drop stores carried. 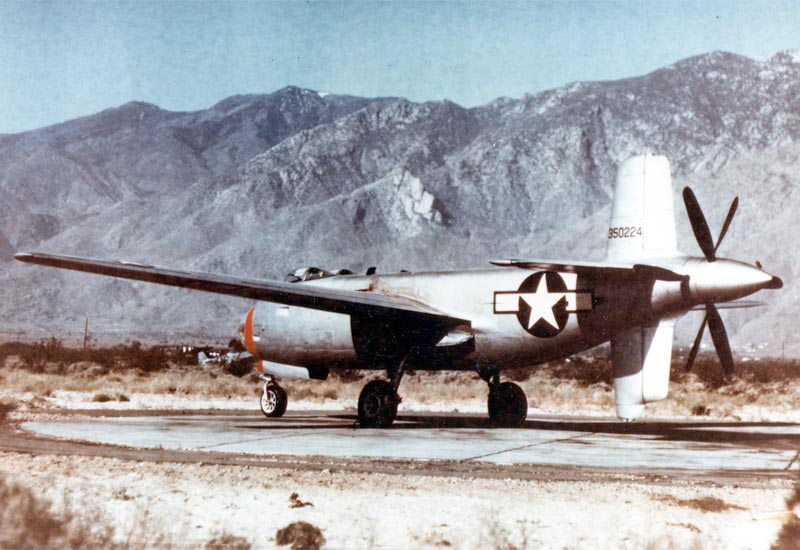 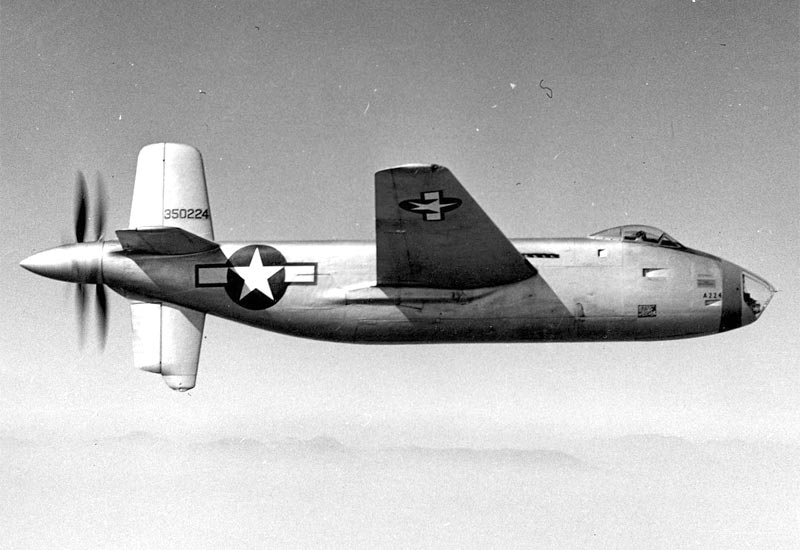 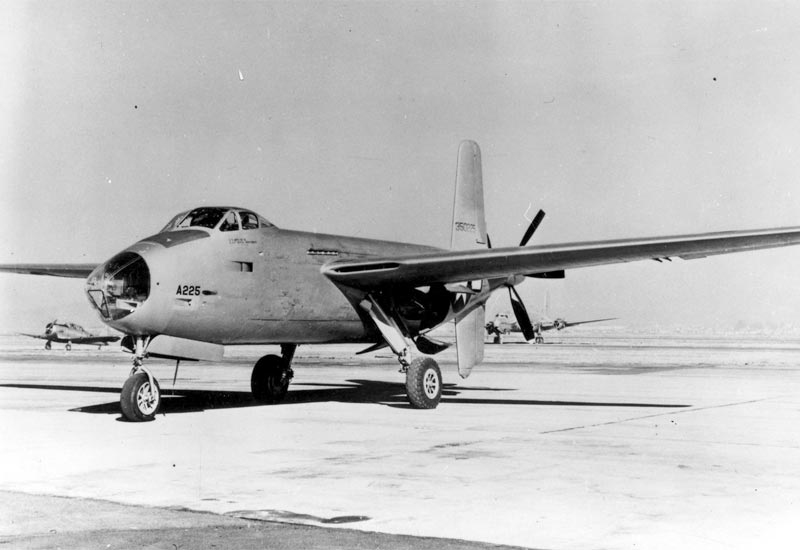 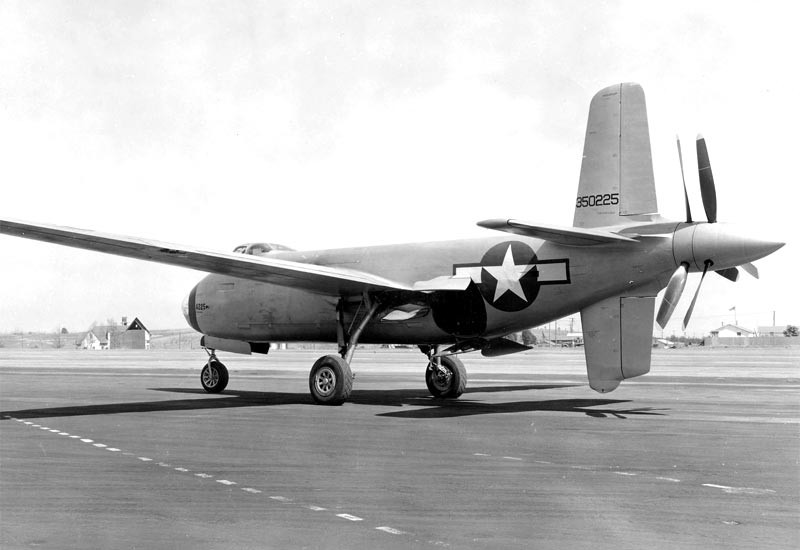 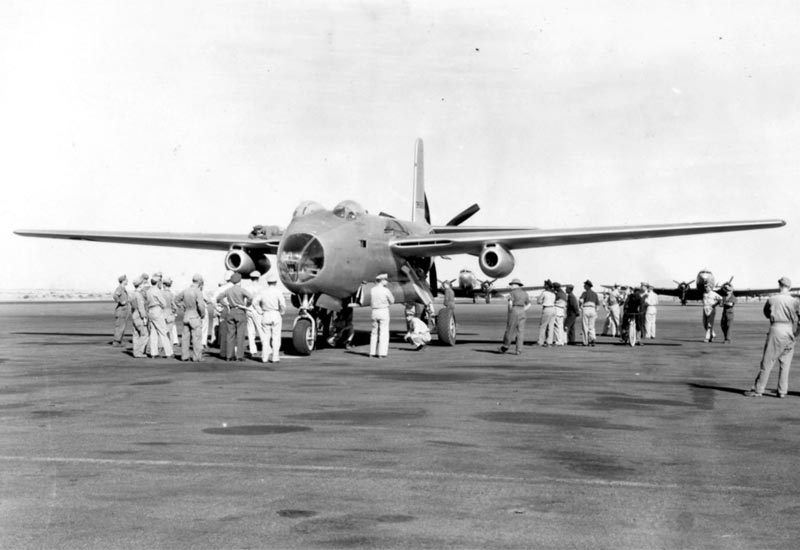 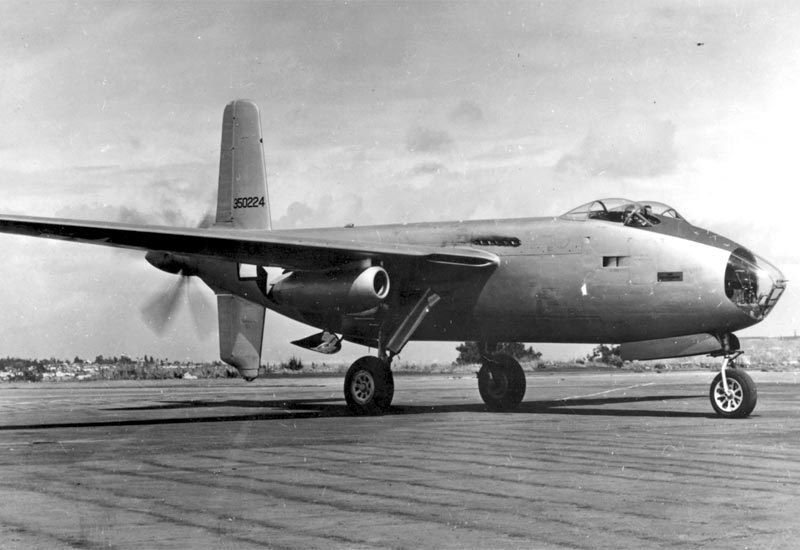