The Light Armed Helicopter product is expected to succeed the aging stocks of MD500 and AH-1 Cobra attack helicopters for the South Korean military.

Authored By: Staff Writer | Last Edited: 01/09/2019 | Content ©www.MilitaryFactory.com | The following text is exclusive to this site. 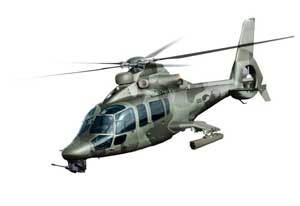 In an effort to upgrade its stock of aging McDonnell Douglas MD500 and Bell AH-1J/S "Cobra' light attack helicopters with one of local origin, KAI (Korean Aerospace Industries) was selected by the South Korean military to lead the charge for a new 5-ton class system. KAI has since partnered with French-based Airbus Helicopters to develop what is known as the "Light Armed Helicopter" (LAH) solution and will be based on the latter's H155 (formerly the Eurocopter EC155) platform. The LAH product will follow the Light Civilian Helicopter (LCH), which is also based on the H155 "Dauphin", that will enter the civilian market in 2020 while the LAH is expected to be in service for 2022 (since pushed back to 2023). The LAH project is being headed by Korea's Agency for Defense Development (ADD) with involvement from the Defense Acquisition Program Administration (DAPA) as well.

KAI and Airbus Helicopters have already combined engineering talents to product the new KAI KUH-1 "Surion" medium-lift helicopter (with Samsung Techwin engines) for South Korean Army and Marine forces. This product is based on the proven Eurocopter EC725 "Super Cougar" platform and several hundred of this model are already on order while deliveries having been ongoing since 2012. The KUH-1 was selected to replace the Bell UH-1H medium family as well as the McDonnell Douglas MD500 light series helicopters in the general utility role.

The LAH is expected to retain the same basic form and function as the Dauphin with the exception of wingstubs added along the lower fuselage sides offering up to four hardpoints for carrying rocket pods and gun pods. A powered chin turret is expected under the nose and engines will most likely be local developments once more. The French Dauphin enjoys a considerable reach on the global stage with some sixty operators and over 1,000 helicopters in service today (2015). It is easily recognized by its sleek design lines and Fenestron-protected tail rotor unit - the latter which reduces the risk of foreign bodies being ingested into the spinning blades and lowers operational noise, particularly over civilian areas. The main rotor will feature a five-bladed design fitted to a low-profile mast.©MilitaryFactory.com
Note: The above text is EXCLUSIVE to the site www.MilitaryFactory.com. It is the product of many hours of research and work made possible with the help of contributors, veterans, insiders, and topic specialists. If you happen upon this text anywhere else on the internet or in print, please let us know at MilitaryFactory AT gmail DOT com so that we may take appropriate action against the offender / offending site and continue to protect this original work.

June 2016 - It was announced that Safran Helicopter Engine's (Turbomeca) "Arriel 2" will power the new LAH. The Resulting Arriel 2L2 will be a joint effort between Safran and Hanwha Techwin. The Arriel 2C2 engine will be used to power a civlian market form of the helicopter.

KAI unveiled the LAH at its Sacheon facility. Ground-testing is set to commence in 2019 with a first-flight to follow before year's end. Service entry is slated for sometime in 2023, now delayed from the originally-announced 2022 target year.

(Showcased performance specifications pertain to the base KAI / Airbus Helicopters Light Armed Helicopter (LAH) production variant. Performance specifications showcased above are subject to environmental factors as well as aircraft configuration. Estimates are made when Real Data not available. Compare this aircraft entry against any other in our database or View aircraft by powerplant type)
PROPOSED:
1 x 20mm cannon in powered chin turret under nose assembly.

Light Armed Helicopter (LAH) - Base Project Name; product to be based on the Eurocopter EC155 model series. 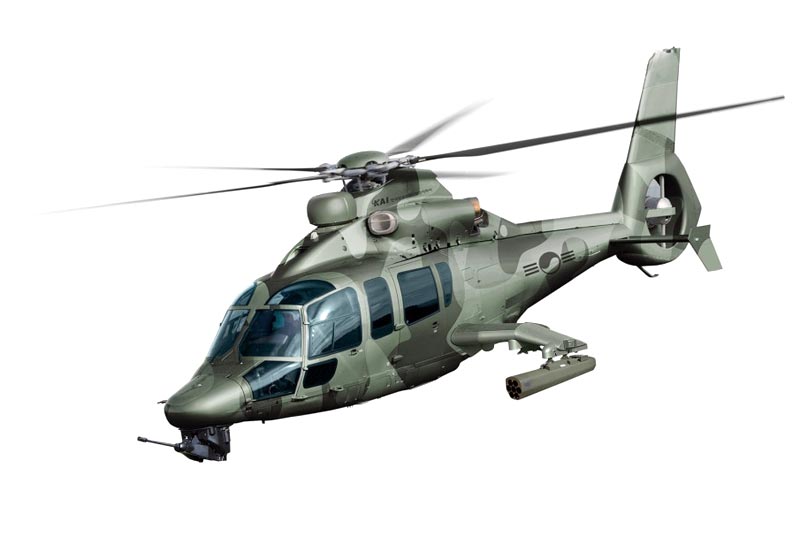