Authored By: Staff Writer | Last Edited: 07/30/2018 | Content ©www.MilitaryFactory.com | The following text is exclusive to this site. 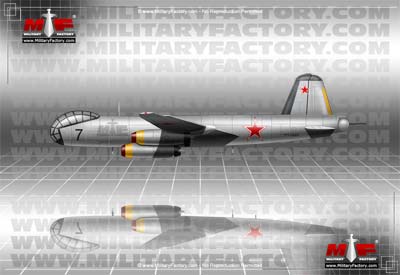 In their historic advance on Berlin during World War 2 (1939-1945), the Soviet Army captured the remnants of the Junkers Ju 287 jet-powered tactical bomber and, with it, an important stepping stone towards advanced jet-powered flight. The Ju 287 was unique not only in its reliance on turbojet propulsion but also in its use of swept-forward wing mainplanes. Just one of the type was completed and a first flight held on August 8th, 1944 while a second (V2) and third (V3) prototype lay unfinished at war's end. The program was more or less taken up by the Soviets to become the OKB-1 "EF-131" prototype of which two were eventually completed though the product was not adopted for serial production.

The Ju 287 V2 and V3 prototypes were used as the basis for the Soviet EF-131 bomber and the V3 proved the more important form despite being the least complete of the two as it mimicked the intended pre-production model for the Ju 287 series. By all accounts, the EF-131 was a near copy of the V3 and is said to have been hastily completed to accomplish a basic first flight during 1946, this conducted over Soviet-occupied Germany before being broken down and shipped to the Soviet Union for proper evaluation. The product was given more attention at GOZ-1 by both German and Soviet engineers with the goal to showcase the product in the 1947 Tushino display.

Despite the goal, the technologically-advanced aircraft was not readied in time and did not record an official first flight until May 23rd, 1947. Program delays and dwindling interest in the aircraft eventually led to its abandonment and subsequent termination in 1948 as Soviet authorities pushed other, more potent, products with better potential. The "EF-140" (detailed elsewhere on this site) became a related offshoot of the EF-131 program but managed little more for its time in Soviet military aviation history.

As completed, the EF-131 exhibited a length of 67 feet, wingspan of 65.6 feet and height of 18.7 feet. Its standard operating crew was three and power was served through 6 x Junkers Jumo 109-004 engines of 1,984lb thrust each. Maximum speed was reported to be 535 miles per hour with a range out to 1,065 miles and a service ceiling of 41,000 feet. Proposed armament was 2 x 13mm heavy machine guns held in a remote-controlled tail barbette while up to 4,400lb of drop ordnance was to be carried in an internal bomb bay.
Advertisements

(Showcased performance specifications pertain to the base OKB-1 EF-131 production variant. Compare this aircraft entry against any other in our database or View aircraft by powerplant type)
PROPOSED, STANDARD:
2 x 13mm heavy machine guns in remote-controlled tail barbette.

PROPOSED, OPTIONAL:
Up to 4,400 lb of conventional drop bombs carried in an internal bomb bay.

EF 131 - Base Series Designation; two examples are said to have been completed.

General Assessment
Firepower
Performance
Survivability
Versatility
Impact
Values are derrived from a variety of categories related to the design, overall function, and historical influence of this aircraft in aviation history.
Overall Rating
The overall rating takes into account over 60 individual factors related to this aircraft entry.
28
Rating is out of a possible 100 points.
Relative Maximum Speed
Hi: 750mph
Lo: 375mph
This entry's maximum listed speed (534mph). 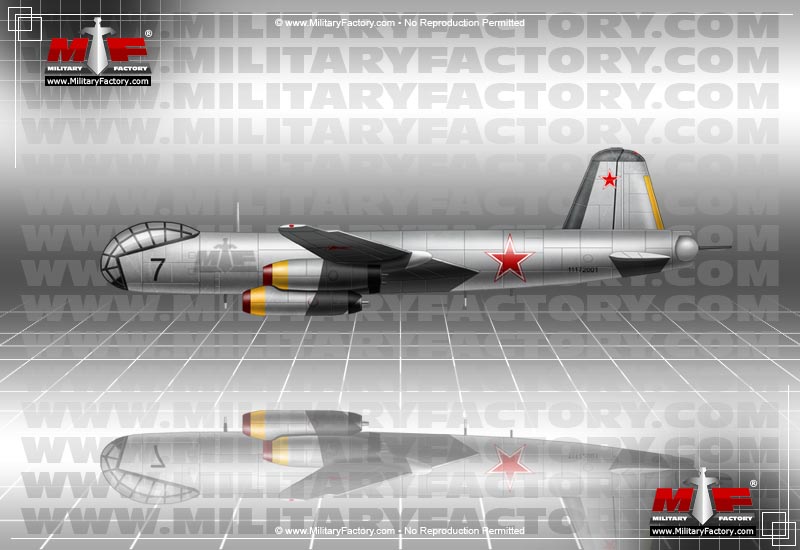