The Messerschmitt Me P.1110 jet-powered fighter-interceptor was designed during the late stages of World War 2 under the German Emergency Fighter Program initiative.

Authored By: Staff Writer | Last Edited: 08/25/2022 | Content ©www.MilitaryFactory.com | The following text is exclusive to this site. 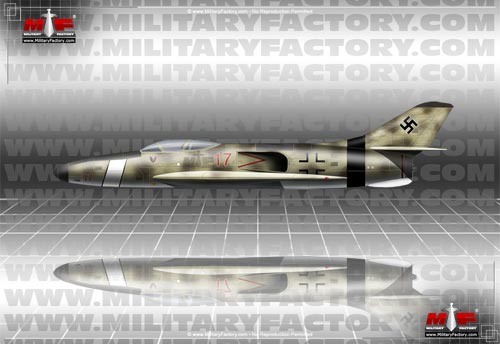 The Emergency Fighter Program (EFP) was begun in July of 1944 by the German Luftwaffe to help produce efficient and effective fighters to combat the growing threat of enemy bombers wreaking havoc on German war-making infrastructure. This produced a myriad of "paper" airplanes, wind tunnel models, and mockups though very few of the designs would ever actually see the light of day before the end. Messerschmitt remained a key contributor to Luftwaffe interests throughout the war - having delivered its important Bf 109 piston-driven fighter before the war - though they were never to repeat success after the arrival of their famous Me 262 "Schwalbe" jet powered fighter.

The P.1110 was one of the company's many late wartime projects and a submission for consideration into the EFP. This aircraft was designed as a high-altitude interceptor with propulsion provided for by a single turbojet engine. It featured swept wing surfaces (the mainplanes low-mounted) and a well-streamlined fuselage with twin intake ducts aspirating the Heinkel HeS 011A powerplant of 2,866lb thrust within. The jet would exhaust through a single ring at the base of the tail unit. The tail unit would have carried a single tail fin with low-set horizontal planes.

By early 1945, the primary threat on German radars was becoming the new Boeing B-29 "Superfortress", the sleek successor to the famous B-17 "Flying Fortress" and capable of carrying a greater war load at higher altitudes and to far greater ranges. While the "People's Fighter", the Heinkel He 162 single-seat, single-engine jet fighter had already taken root in the Luftwaffe inventory, this design was already of an older generation of jets despite its advanced form and a new, all-modern interceptor solution was sought. The P.1110 joined other Messerschmitt designs in attempting to satisfy the new Luftwaffe requirement.

Messerschmitt engineers estimated maximum speed at approximately 630 miles per hour thanks to its sleek design, swept surfaces and contoured intakes (no other numbers were available). Dimensions were to include a length of 30.7 feet, a wingspan of 27 feet and a height of 8.8 feet. Projected armament was to be 3 x 30mm MK 108 series autocannons fitted to the nose for a hefty punch against the most stubborn of enemy bombers. The aircraft would require only a single pilot and this person set under a simplified two-piece canopy with little framing to obstruct all-around vision. Overall construction was to use as much wood as possible due to limitations in raw war materials - particularly metal. The undercarriage was an all-wheeled, retractable tricycle arrangement.

Despite the seemingly impressive nature of the design, the aircraft was not selected by German authorities for further work (this honor fell to the intriguing Junkers EF 128 pseudo-flying wing interceptor). During the design stage, Messerschmitt also developed its aircraft along several slightly different lines - the P.1110/II was to feature a unique "ring-shaped" intake design aft of the cockpit as well as a V-shaped tail arrangement while the Me P.1110 "Ente" ("Duck") was given something of a complete rewrite - its cockpit was moved forward to take up the entire nose and small wing foreplanes (canards) fitted ahead of standard mainplanes aft. None of these additional products was given much steam before the German surrender of 1945.©MilitaryFactory.com
Note: The above text is EXCLUSIVE to the site www.MilitaryFactory.com. It is the product of many hours of research and work made possible with the help of contributors, veterans, insiders, and topic specialists. If you happen upon this text anywhere else on the internet or in print, please let us know at MilitaryFactory AT gmail DOT com so that we may take appropriate action against the offender / offending site and continue to protect this original work.
Advertisements

(Showcased performance specifications pertain to the base Messerschmitt Me P.1110 production variant. Performance specifications showcased above are subject to environmental factors as well as aircraft configuration. Estimates are made when Real Data not available. Compare this aircraft entry against any other in our database or View aircraft by powerplant type)
PROPOSED, STANDARD:
3 x 30mm MK 108 automatic cannons in nose assembly.

General Assessment
Firepower
Performance
Survivability
Versatility
Impact
Values are derrived from a variety of categories related to the design, overall function, and historical influence of this aircraft in aviation history.
Overall Rating
The overall rating takes into account over 60 individual factors related to this aircraft entry.
52
Rating is out of a possible 100 points.
Relative Maximum Speed
Hi: 750mph
Lo: 375mph
This entry's maximum listed speed (631mph). 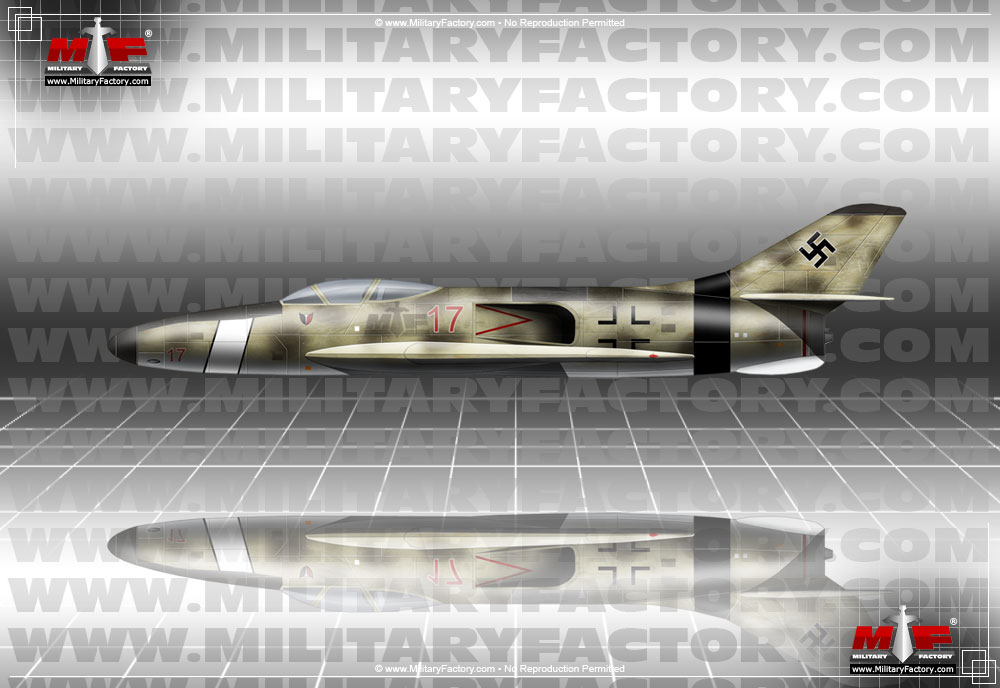 Aviation developments of similar form and function, or related to, the Messerschmitt Me P.1110...