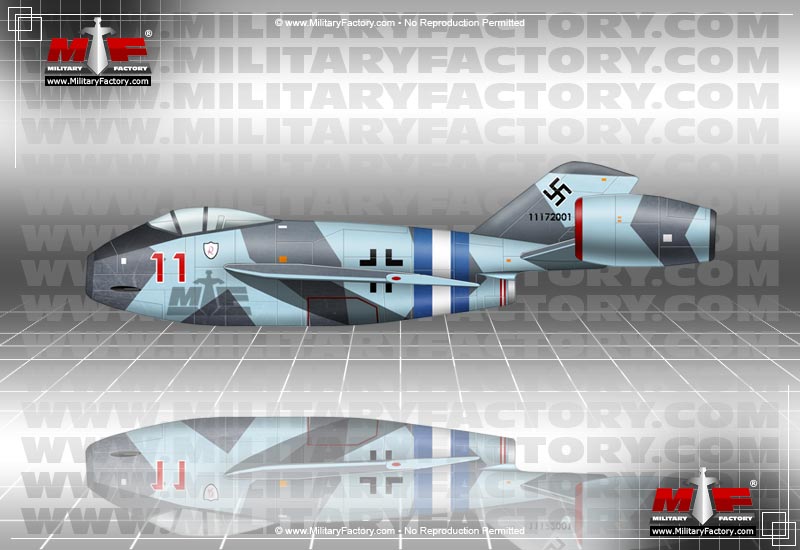 Like so many other German Luftwaffe paper airplane projects of World War 2, the rocket-and-ramjet-powered Super Lorin interceptor failed to materialize before the end.

Authored By: Staff Writer | Last Edited: 05/15/2018 | Content ©www.MilitaryFactory.com | The following text is exclusive to this site.
The "Super Lorin" stood as one of the many "paper airplane" projects undertaken by German aviation during World War 2 (1939-1945). The aircraft was being drawn up by engineers of the storied concern of Focke-Wulf (makers of the famous Fw 190 fighter) and appeared in the latter stages of the conflict as a possible fighter-interceptor solution. It was to utilize several advanced concepts of the time including swept-back wing surfaces and ramjet engine propulsion for cruising. Ramjets gained popularity during the war for their promised speeds though their key limitation lay in the inability to propel an aircraft from complete rest - as such ramjets required a primary form of assisted take-offs such as rocket power. Design of the Super Lorin is attributed to aviation engineer Heinz von Halen.

The Super Lorin utilized a stout, rounded fuselage with a bubble-style canopy over the nose. The nose also featured an intake to aspirate the rocket engine within, this installation required to help reach the ramjet's minimum take-over speed of around 150 miles per hour. The rocket sat in the belly of the machine and exhausted through a port under the tail unit. The wing mainplanes were set ahead of midships and featured considerable sweep along both the leading and trailing edges while being mid-mounted along the sides of the fuselage. The tail unit extended aft of the mainplanes and featured a single vertical fin as well as two upward-canted horizontal planes - each of these planes containing a ramjet engine installation at its tip. The ramjets were to be of an in-house Lorin-designed and developed solution. The close positioning of these engines to the body of the aircraft was intended to limit airflow disruptions and produce a more pleasing, aerodynamically refined shape. The undercarriage was all-wheeled and involve three legs (two main and one under the nose) in a tricycle arrangement, completely retractable within the body of the aircraft. With seating for one crew, the aircraft's proposed armament was 2 x 30mm MK 108 series autocannons which would have given the fast fighter a hefty punch against Allied bombers. The cannons were featured in mountings under the nose at either side of the rocket intake port. The only recorded dimensions of the aircraft were a length of 11.6 meters and a wingspan of 7.6 meters.

Like other Luftwaffe paper airplane projects, the Super Lorin was not constructed in any physical form before the end of the war for Germany in May of 1945. The aircraft was being designed alongside another Focke-Wulf fighter-interceptor - the Ta 283 (detailed elsewhere on this site) - which also did not see the light of day by the end.

Performance figures listed for this record are purely estimated by the author based on similar developments of the period.

(Showcased performance specifications pertain to the base Focke-Wulf Super Lorin production variant. Compare this aircraft entry against any other in our database. View aircraft by powerplant type)
PROPOSED:
2 x 30mm MK 108 cannons in nose.

Values are derrived from a variety of categories related to the design, overall function, and historical influence of this aircraft in aviation history.
Overall Rating
The overall rating takes into account over 60 individual factors related to this aircraft entry. The rating is out of a possible 100 points.
24
Relative Maximum Speed
Hi: 750mph
Lo: 375mph
This entry's maximum listed speed (621mph).