Part of the heavy bomber German initiative of World War 2, the Focke-Wulf Ta 400 only ever became an incomplete prototype by the end of the war. 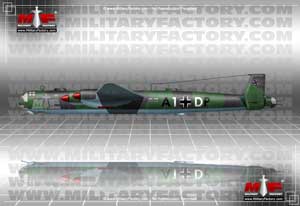 The early wartime commitment to fighters and medium bombers came back to haunt German warplanners during the middle and latter stages of World War 2 (1939-1945). As the war in Europe moved along and brought with it a growing material commitment from the United States and others, the Luftwaffe was hard pressed to bring the fight over enemy cities in an attempt to demoralize the homefront. As such, a program was devised by the Germans under the name of "Amerika Bomber" to bring about a long-range, heavy strategic bomber capable of making the Atlantic crossing. The design would have to cover some 3,600 miles and eventually involved some of Germany's top wartime aviation firms including Focke-Wulf, Heinkel, Junkers, and Messerschmitt. None of the proposed submissions were successful with only a select few actually seeing any notable completion/production - the primary detriments named were program cost and material commitment from within the confines of the deteriorating German war situation.

The Focke-Wulf concern, largely recognized by its famous Fw 190 single engine fighter of the war, had already entertained a multi-engine long-range aircraft for the civil airliner and military markets during 1941-1942 (as the "Ta 300"). The type was also being developed as a possible successor to another Focke-Wulf product - the Fw 200 "Condor" maritime patrol bomber. With the need for dedicated long range bombers by the German Luftwaffe, the civil-minded Fw 300 design fell to naught and no material work was committed to the project.

With its background in large, multi-engine aircraft Focke-Wulf moved on a new German Air Ministry requirement that appeared in January of 1942. The specification called for a bomber platform of considerable operational range with hefty bomb load capabilities to boot for use in the long-range bombing role or for reconnaissance duty. Focke-Wulf's famous engineer, Kurt Tank, revealed plans for such an aircraft when he penciled the "Ta 400" based on his earlier Ta 300. Tank envisioned a massive aircraft powered by no fewer than 6 x radial piston engines set along a straight monoplane wing assembly. The overall design form was highly conventional for the period and included a streamlined, tapered fuselage, remote-controlled cannon-armed weapon stations, and a "split-T" twin rudder tail unit.
Advertisements

Design work on the Ta 400 began in 1943 and involved both German and French engineers, the latter unfortunate enough to be caught up in German territory following the fall of Paris during the Battle of France (May-June 1940). This work was therefore being undertaken at a Focke-Wulf facility stationed outside of Paris. The engine of choice became the BMW 801D air-cooled, 14-cylinder radial in a twin row arrangement whose output was rated at 1,700 horsepower each and six of these were to be used to power the aircraft. For high altitude service, the crew areas were all to be pressurized. Remote-controlled turret barbettes allowed for heavy armament to be fitted and the crew kept within the confines of the pressurized sections of fuselage. In terms of bomb load, the aircraft was intended to carry up to 53,000 lb and performance from the engines would net an estimated operational range out to 7,500 miles. In time, the idea of 2 x Junkers Jumo 004 supporting turbojet engines (2,000 lb thrust each unit) was added which would serve to help performance - particularly on take-off. The standard crew complement numbered nine to consist of flight crew as well as mission specialists and dedicated gunners. One facet of the Ta 400's design that changed consistently was the heavily-glazed shape of the cockpit canopy.

To reduce the reliance on fighter escort, the Ta 400 was outfitted with a projected defensive armament of 10 x 20mm cannons. Two small remote-controlled turrets were set under the nose and fitted 2 x 20mm MG 131/20 cannons each (for four total guns at this location). Two turrets were set along the spine of the aircraft and fitted 2 x MG 151/20 cannons apiece. A sole ventral turret fitted another pairing of 20mm MG 151/20 guns. To protect the aircraft's more vulnerable rear, a turret was placed which mounted 4 x 20mm MG 151/20 guns.

Beyond the use of traditional Luftwaffe bombs like the SD and SC series, the Ta 400 was also in line to carry the more advanced "Fritz X" and Henschel Hs 293 and Hs 294 radio-controlled guided bombs/missiles. Naval mine dispensing was also a possibility given the Ta 400's maritime patrol role envisioned. Ordnance could be held internally as well as across hardpoints found under the fuselage (3) and under the engine nacelles (16).

Heading into 1943, the German Air Ministry began favoring competing Amerika Bomber designs for the long range bomber / reconnaissance role until even these were abandoned in favor of more defensive-minded fighters as the German war situation worsened. This led to the Air Ministry dropping their formal support of the Ta 400 during October before any useful prototype had been realized. Undeterred, Focke-Wulf briefly attempted to interest the Italians in assisting with bringing the product to fruition - however the formal Italian surrender in September of 1943 all but ended this short-lived venture.
Advertisements

OPTIONAL:
Up to 22,045 lb of internally-held conventional drop stores.

General Assessment
Firepower
Performance
Survivability
Versatility
Impact
Values are derrived from a variety of categories related to the design, overall function, and historical influence of this aircraft in aviation history.
Overall Rating
The overall rating takes into account over 60 individual factors related to this aircraft entry.
66
Rating is out of a possible 100 points.
Relative Maximum Speed
Hi: 400mph
Lo: 200mph
This entry's maximum listed speed (395mph). 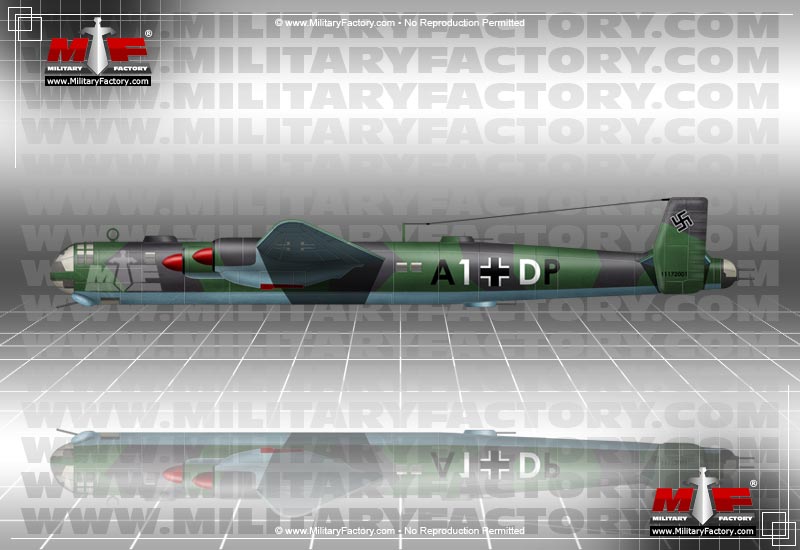