The Airbus Helicopters NH90 series medium-lift transport helicopter has caught on with several notable military forces of the world.

Authored By: Staff Writer | Last Edited: 06/10/2022 | Content ©www.MilitaryFactory.com | The following text is exclusive to this site. 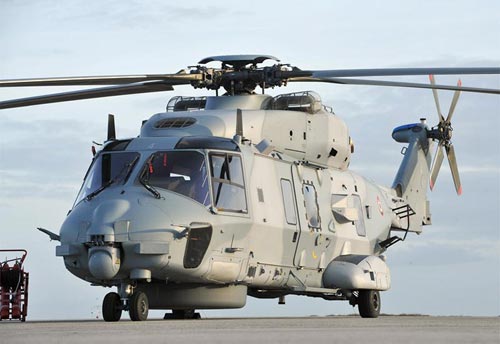 The NH90, developed by Eurocopter's helicopter arm NHIndustries (now under the Airbus Helicopters brand label), is a medium-lift multirole platform in service with several of the primary European militaries. It saw a first flight on December 18th, 1995 and was introduced in 2007. Production has been ongoing since 1995 and some 244 units have been completed to date (2015). The NH90 is the first helicopter in history to sport a full fly-by-wire control scheme.

Outwardly, the NH90 is a sleek modern offering. It sits its piloting crew in a side-by-side arrangement at the front of the fuselage, aft of a short nose cone. Vision out-of-the-cockpit is good. The passenger cabin takes up the aft space and is lined with rectangular windows for viewing. A raised tail stem allows a powered cargo ramp to be fitted which allows complete access to the cargo hold within. The main rotor blade is a composite four-bladed system seated low on the fuselage roof. A four-bladed unit, mounted to the portside, makes up the tail rotor installation atop the vertical tail fin. A sole horizontal plane is seated along starboard. The wheeled undercarriage is retractable to preserve aerodynamic quality.

The NH90 can support two engine brands based on customer need / logistics - the Rolls-Royce Turbomeca RTM322-01/9 turboshaft of 2,230 horsepower and the General Electric T700-T6E turboshaft of 2,115 horsepower. The helicopter seats two engine units above the cabin space and, when coupled to the advanced airframe design, allows the NH90 a maximum speed of 185 miles per hour, a range out to 500 miles and a service ceiling of 20,000 feet. A rate-of-climb of 1,575 feet-per-minute is listed.

Internally, the NH90 can seat up to 20 combat-ready troops or up to two NATO-standard cargo pallets. Additionally, there is an underslung cargo load hauling feature that allows another 9,260 lb to be carried externally. For the MEDEVAC role, the cabin fits up to twelve medical litters and staff. If armed for combat zone service, the MH90 supports 7.62mm door guns on trainable mounts for local defense. In the anti-ship / anti-submarine role, missiles or torpedoes can be carried aloft.

Operators of the NH90 system currently (2015) include Australia (as the MRH-90 "Taipan" - detailed elsewhere on this site), Belgium, Finland, France, Germany, Greece, Italy (SH-90A/UH-90A), Netherlands, New Zealand, Norway, Oman, Spain and Sweden (as the HKp 14/14b). Both Portugal and Saudi Arabia backed out of orders for the NH90.

There are two primary variants in the NH90 lineup: "NFH" is used to designate "NATO Frigate Helicopters" equipped for the anti-ship / anti-submarine role and are all-weather, day-night hunting platforms. These can also serve in Search and Rescue (SAR), general transport and humanitarian assistance roles. "TTH" is used to mark "Tactical Transport Helicopter" models serving in dedicated transport roles (cargo or personnel). Its covered roles can also include airborne infantry insertion, Electronic Warfare (EW), training, VIP passenger transportation, special operations support and the like.

Operational service of NH90s has not been without issue. There have been ongoing concerns about overall performance to the point that some global forces delayed service entry until issues could be rectified or proven false. Dutch airframes noted excessive wear early on and German concerns focused on hauling capability and weaknesses in the cargo door installation. Spool bending in the turboshaft engines has been noted in both German and Australian operation resulting in the grounding of whole NH90 fleets. Additionally, the Australians have encountered consistent windshield fracturing and deformations of the lightweight cabin floor resulting in forced modifications.©MilitaryFactory.com
Note: The above text is EXCLUSIVE to the site www.MilitaryFactory.com. It is the product of many hours of research and work made possible with the help of contributors, veterans, insiders, and topic specialists. If you happen upon this text anywhere else on the internet or in print, please let us know at MilitaryFactory AT gmail DOT com so that we may take appropriate action against the offender / offending site and continue to protect this original work.

October 2017 - The NH90 is a contender for the new Anti-Submarine Warfare (ASW) requirement of South Korea. Other contenders are the Leonardo AW159 and Sikorsky MH-60R series.

August 2018 - Qatar has secured a deal for twenty-eight NHIndustries NH90 helicopters. Deliveries will commence in 2022 and run into 2025. Twelve of the lot will be navalized versions (NFH) while the remaining sixteen will be outfitted for general utility/transport roles (TTH).

September 2018 - The Spanish government has green-lighted the acquisition of 23 NHIndustries NH90 transport helicopters, set to bring the Spanish fleet to 45 before the end.

August 2019 - The German government has approved a deal for the German Navy to acquire the NH90 to replace the service's aging line of Westland Sea Lynx 88A helicopters in the Anti-Submarine Warfare (ASW) role. These will join the twenty-one already on order to succeed an aging stock of Westland Sea king 41 SAR/utility helicopters.

October 2019 - The German military is looking to have its full fleet of NH90 helicopters, named "Sea Lion", in operational service before 2030. The German forms are the first to feature an updated avionics suite allowing them to traverse civilian airspaces.

October 2019 - It was announced that NH90 helicopters are slated to receive avionics software upgrades as the product moves towards its first round of modernization and continues to mature on the world stage.

July 2020 - A Dutch Coast Guard NH90 helicopter has crashed in the Caribbean Sea near Aruba on July 19th, 2020 while on patrol leading to a suspension of NH90-related operations for the country.

October 2020 - The French military is modifying ten of its NH90 helicopter fleet for the special operations role.

December 2020 - The German Navy has ordered 31 NH90 helicopters to satisfy the requirements of its Sea Tiger program. The helicopter will succeed an aging line of Westland Sea Lynx helos in the Anti-Submarine Warfare (ASW) and anti-ship role.

June 2022 - Citing availability issues, Norway has given up use of the NH90 series helicopters.

(Showcased performance specifications pertain to the base Airbus Helicopters NH90 production variant. Performance specifications showcased above are subject to environmental factors as well as aircraft configuration. Estimates are made when Real Data not available. Compare this aircraft entry against any other in our database or View aircraft by powerplant type)
OPTIONAL:
7.62mm Machine Guns on pintle mountings at door positions supported and special mission versions can carry Anti-Submarine Warfare (ASW) / Anti-Ship Missiles (ASMs) and other cleared air-to-surface missiles as needed. 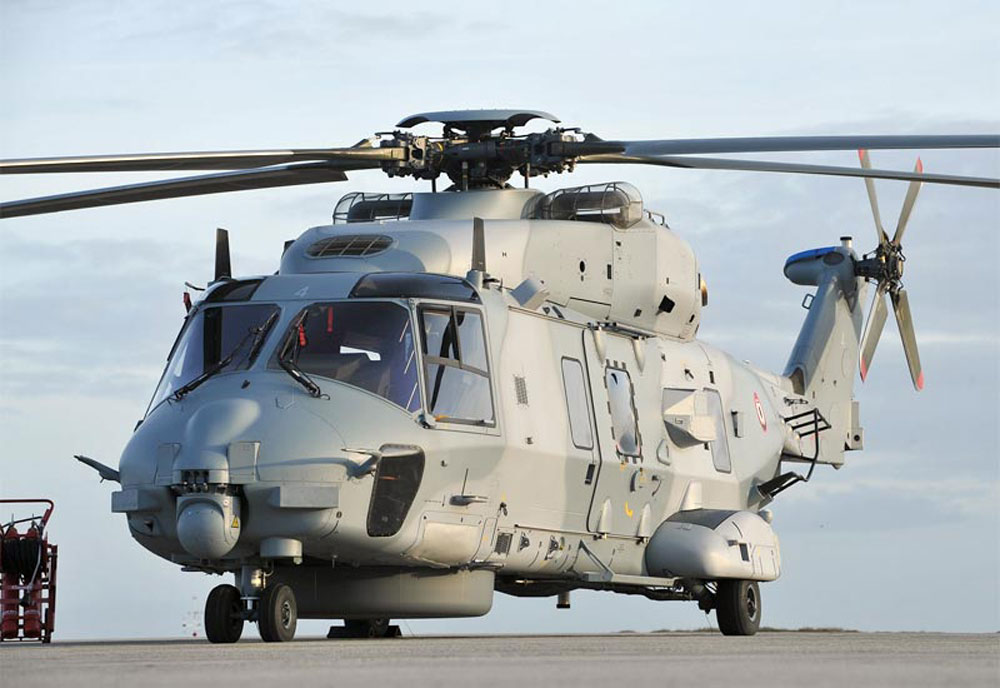 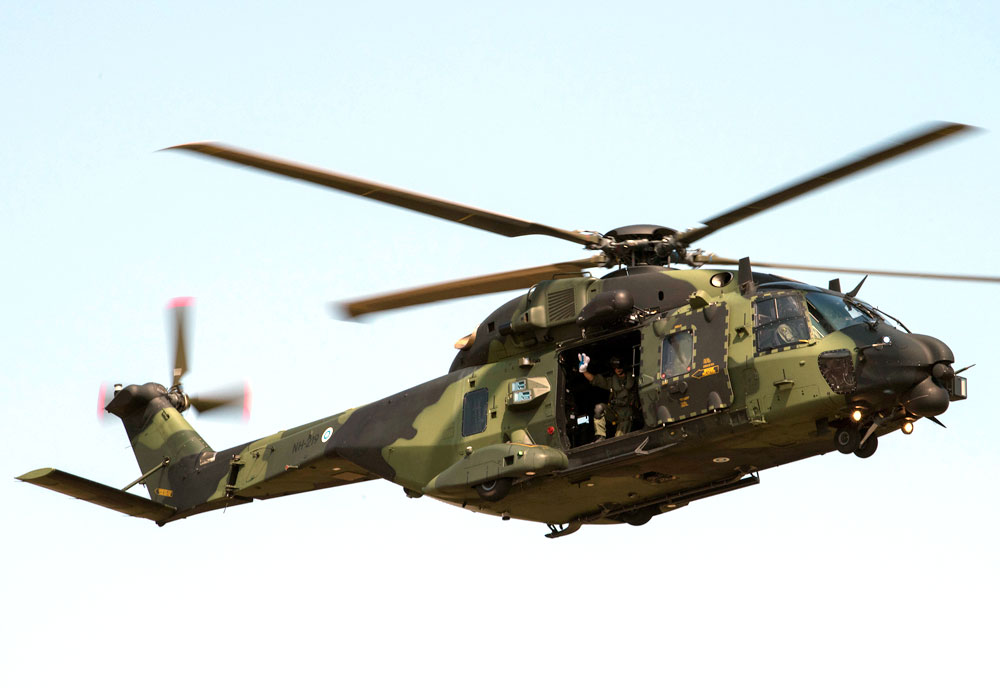 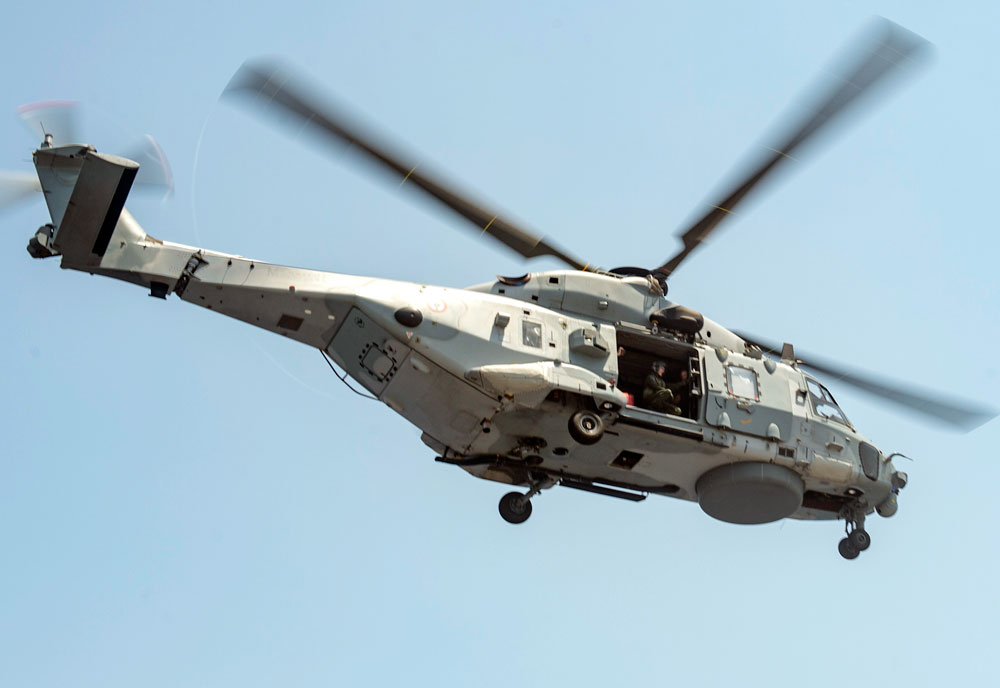