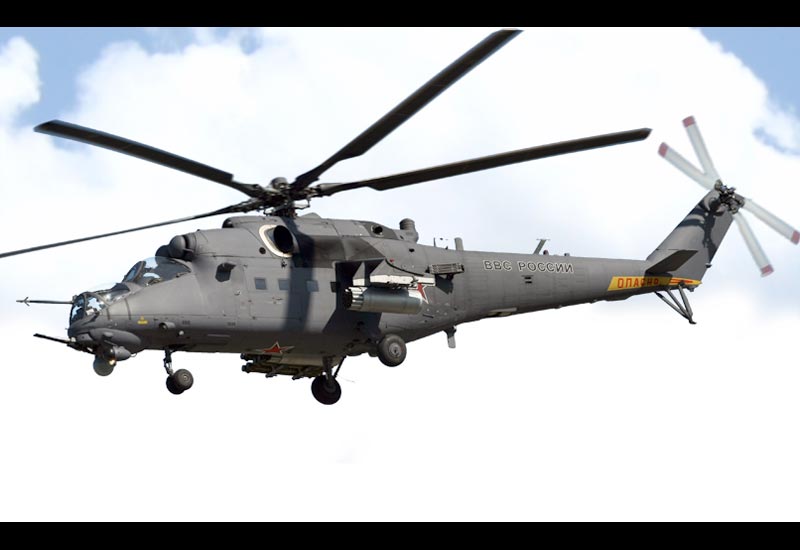 The Mil Mi-35 "Hind" became a major upgrade to the classic Soviet-era Mi-24 "Hind" assault gunships and transport series of heavy helicopters. When the Mi-24 received various system upgrades, the Mi-24V model variant was born and from this came the Mi-35 which originally served as the export designation. The Mi-35 carries a multirole classification and retains the tandem, two-seat crew arrangement as well as passenger cabin of the original Mi-24 and weapons are still held externally underneath wingstubs as in the original. The system entered series production in 2005.

Compared to the original Cold War player, the Mi-35 has been given upgraded avionics and navigation along with a digital glass cockpit for each crewmember. The helicopter is also outfitted with a laser rangefinder, thermal imaging device, and improved target sighting systems. Internally, the helicopter has received reinforcement of its structure for increased battlefield survivability. The five-bladed main rotor utilizes fiberglass construction and armament wingstubs have been shortened to help promote a thinner forward/rear profile. Additional work has been put into rough field and "hot-and-high" operational capability as well.

The changes added to the Mi-24 to become the Mi-35 have considerably modernized and broadened the Cold War product considerably. All-weather and day-night operational capabilities are considered strong as is over-water service allowing the Mi-35 to function in nearly any battlefield environment. Optional equipment includes the OPS-24N observation-sight system, upgraded Anti-Tank (AT) functionality, and support for non-Russian communications kits.

Beyond the attack helicopter role, the Mi-24/Mi-35 is something of a unique combat helicopter in that it can ferry up to eight fully-equipped combat troops thanks to its cabin area set under the main rotor and engines. Additionally, this space can be used to ferry cargo loads up to 1,500 kilograms overall while a sling system allows for an additional 2,400 kilograms to be carried externally. Beyond these roles, the helicopter can also serve as a MEDEVAC platform for ferrying wounded and associated medical staff. Onboard survivability is improved through a modern Radar Warning Receiver (RWR), IR jammer, IR suppression system at the engine exhaust vents, cockpit and critical components armoring, and a chaff/flare dispenser.

Its engine makeup is 2 x Klimov VK-2500 series turboshafts with reduced noise levels and maintenance requirements. The Mi-35 retains the Mi-24's fixed wheeled tricycle undercarriage. Maximum speed reaches 310 kmh with cruising near 260 kmh. Hovering ceiling is 3,150 meters with a maximum operational ceiling of 5,400 meters. Ferry ranges reach out to 1,000 kilometers with a combat radius of 460 kilometers.

As armament is at the heart of the Mi-35 system, the helicopter can boast an impressive dedicated or mixed array of weaponry. This includes up to eight Anti-Tank Guided Missiles (ATGMs) across the four presented underwing hardpoints. Rocket loads are either 80mm S-8 series or 122mm S-13 series munitions used alongside or in place of the missile armament. 23mm gun pods can also be carried under the wingstub assemblies while there is also a twin-barreled 23mm cannon mounted in the chin turret as standard.

To date, the Mi-35 has been taken on by the Russian Army as well as Azerbaijan, Iraq, and Brazil. Mi-35 represents the standard version based on the Mi-24V while the Mi-35 is an export night attack variant with improved sensors for low-light-level operation. The Mi-35M2 marks updated Mi-35Ms for service in the Venezuelan Army. Similarly, the Mi-35M4 is for the Brazilian Air Force though with Israeli avionics (as the AH-2 "Sabre"). The Mi-35O is a Mexican Army model with locally-developed FLIR system. The MI-35P is the export designation for the Mi-24P model which is closely related to the Mi-24VM and Mi-35M3 is used to designate export-minded Mi-24VMs. The MI-35U is an unarmed trainer variant of the combat-capable Mi-35.

June 2016 - It was announced that Nigeria will soon introduce the Mi-35M as part of its active inventory.

October 2017 - Mali has become the latest Mi-35 helicopter operator with two Mi-35M models having been delivered by Russia.

May 2018 - Kazakhstan has committed to the purchase of an unspecified number of Mi-35M platforms during KADEX-2018.

December 2019 - Serbia has beefed up its helo fleet by taking delivery of four Mi-35M attack helicopters / gunships from Russia.

(Showcased performance specifications pertain to the Mil Mi-35M production variant. Compare this aircraft entry against any other in our database or View aircraft by powerplant type)
STANDARD:
2 x 23mm Twin-barreled cannons in traversable chin turret.

Values are derrived from a variety of categories related to the design, overall function, and historical influence of this aircraft in aviation history.
Overall Rating
The overall rating takes into account over 60 individual factors related to this aircraft entry.
74
Rating is out of a possible 100 points.
Relative Maximum Speed
Hi: 200mph
Lo: 100mph
This entry's maximum listed speed (193mph).

Aviation developments of similar form and function, or related to, the Mil Mi-35 (Hind-E)...