The Dassault Mirage G was unique in its design compared to previous Dassault aircraft for its use of variable-sweep wings.

Authored By: Staff Writer | Last Edited: 03/12/2019 | Content ©www.MilitaryFactory.com | The following text is exclusive to this site. 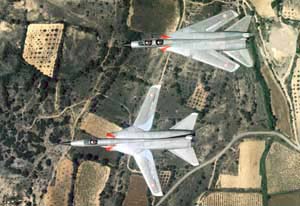 The idea of variable sweep wing mainplanes was in play as early as the 1920s and 1930s but did not see sufficient, practical progress until the Germans attempted the Messerschmitt Me P.1101 fighter project (detailed elsewhere on this site). This aircraft never became airborne for it was still in development when captured by the Americans and appropriately dissected. The design provided much-needed data and analysis on future projects ultimately employed by the West and influenced the Bell X-5 quite heavily. Unlike the P.1101, whose wing sweep could only be changed prior to flying, the X-5 was able to accomplish wing sweep in the air when needed.

The execution of variable geometry wings became possibility when technology finally caught up with engineering theories. By the end of World War 2 (1939-1945), the turbojet and rocket propulsion had both made their mark as the way of the future. Swept wings were critical to aircraft function during high speed actions while, conversely, unswept wings were better suited for handling at low-speed envelopes. Up to this point in history no one single frame could accomplish a mid-air change of its wing angle.

From this work inevitably came several notable aircraft designs to appear during the Cold War years (1947-1991). Some of the more classic examples were the Grumman F-14 "Tomcat" carrier-borne fleet defense fighter, the European PANAVIA "Tornado" strike fighter, the General Dynamics F-111 "Aardvark" strike fighter and the Soviet Sukhoi "Fitter" family. Even larger airframes were introduced that sported variable wing technology such as the American Rockwell B-1 "Lancer" and the Soviet/Russian Tupolev Tu-160 "Blackjack" strategic bombers.

As the PANAVIA Tornado showed, the swing-wing concept was not lost on Europe. Some time earlier before this consortium strike fighter appeared, the French concern of Dassault made headway in an indigenous design known as the Dassault "Mirage G". Despite aspirations for it to become a frontline fighter / interceptor, the aircraft only existed in a technology demonstrator form, no adoption forthcoming.

Because France's attempts at Vertical Take-Off and Landing (VTOL) aircraft gained little useful ground, it was thought to devise a more conventional take-off and landing aircraft - though incorporating elements into it that would allow for shorter runway distances.. This could be accomplished through two ways - the first being the addition of key high-lift devices and the second being an all-new "variable geometry" wing, the wings being adjusted in-flight. The French government's interest was such that it supplied funding for the venture and Dassault moved ahead with development of two distinct aircraft - the "F2" model would sport conventional, fixed wings with high-lift devices added and the "Mirage G" was to carry the variable geometry wing system.
Advertisements

In 1964 the call had come down from French military authorities to pursue the more unconventional swing-wing model as a potential fighter for both the French Air Force and Navy air arm. A scale model was unveiled of what was called the "Mirage IIIG" at the 1965 Paris Air Show and a single prototype contract followed before the end of the year. F2 managed a first flight on June 12th, 1966 but only a single prototype was completed of this proposed two-seat Mach 2+ attack fighter, the product ultimately cancelled but its design undoubtedly influenced its sister, the Mirage G.

With the F2 fuselage left largely intact, the Mirage G would only require some alterations to its major components. The wings were the primary quality differentiating the new aircraft from the F2. The Mirage G carried the single Pratt & Whitney engine in its fuselage with the propulsion unit aspirated through a split intake duct arrangement, this made up of two semi-circle openings along the sides of the cockpit walls. Each intake was given a two-position center-body to react against incoming airflow. "Wing gloves" were added at the wingroots to house a portion of the variable geometry workings and the wing mainplanes, mounted high on the fuselage, was fitted at midships. A conventional single-finned tail unit was used which incorporated all-moving tailplanes. These horizontal surfaces were mounted lower than the mainplanes ahead of it for better high speed cohesion. The mainplanes were given four preset sweep values: 20- (fully forward), 30-, 55-, and 70-degrees (fully swept). The undercarriage was of a tricycle arrangement showcasing a single-wheeled nose leg and a pair of double-wheeled main legs. A two-person cockpit (seated in tandem) made up most of the forward section of the fuselage. A nose cone was to house a radar fit should the Mirage G design proceed into a more finalized combat form.

A prototype Mirage G was showcased during June 1967 but a first flight not had until November 18th of that year owing to technological issues and reworks being applied to the design. The project was also delayed by the loss of the Mirage F1 prototype which crashed and forced a review of the all-moving tailplanes in use. During its initial "hop" the Mirage G did not employ its wing sweep capability - the mainplanes were left in the full-forward position to simplify tests. This marked the Mirage G as the first European-originated swing-aircraft to ever achieve flight. On November 24th, the aircraft reached over Mach1 in testing with its wings pulled to the 55-degree position. Mach 2 was reached in December as the wings were brought back to their final swept position. Dozens of flights followed into mid-1968 ad revisions were being applied as issue arose - the Mirage G was in a state of constant evolution.

Despite the progress revealed by the Mirage G program, there grew no serious interest in developing the aircraft as a frontline fighter for the French Air Force and Navy by the end. Government funding was always a chief concern for such open-ended projects and authorities disliked the prospect of developing a French fighter with a foreign engine. Additionally a twin-engine design was seen as a more feasible entry for increased survivability, performance and operational ranges.

While any real hope of the Mirage G being adopted for service ended in 1968, Dassault continued its testing phase into the early 1970s. The sole prototype was finally lost (its pilot ejecting safely) in January of 1971, ending her days in the air.

The last glimmer of hope for Mirage G came from a 1968 French government initiative which called for a pair of twin-engined, nuclear-capable strike fighters. Dassault worked on these under the Mirage G4 designation until revised requirements made the pair into dedicated interceptor types. These, therefore, were redesignated as the "G8-01" and the "G8-02". G8-02 differed in being a single-seat design form. Both prototypes were eventually flown, G8-01 in May of 1971 and G8-02 following in July of 1972 but this initiative, too, fell flat and the Mirage G line disappeared into French aviation history.
Advertisements

(Showcased performance specifications pertain to the base Dassault Mirage G production variant. Compare this aircraft entry against any other in our database or View aircraft by powerplant type)
None. 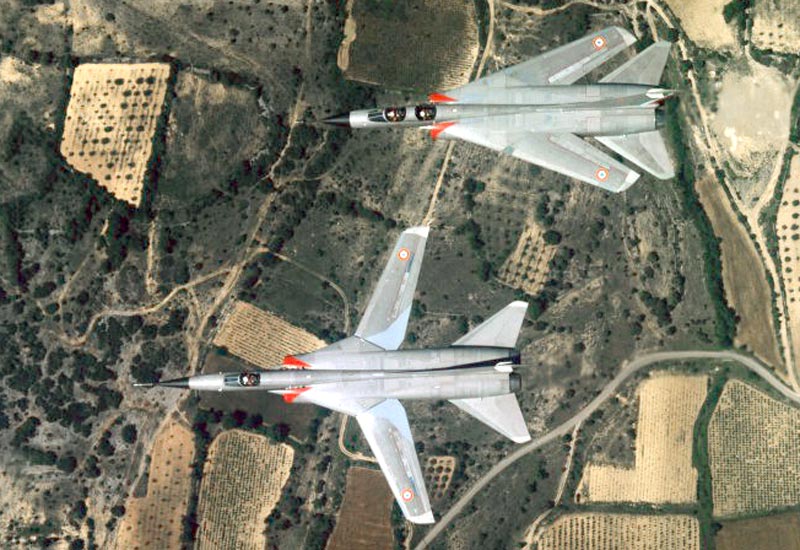 Image from the Dassault Aviation Collection.