Authored By: Staff Writer | Last Edited: 07/23/2021 | Content ©www.MilitaryFactory.com | The following text is exclusive to this site. 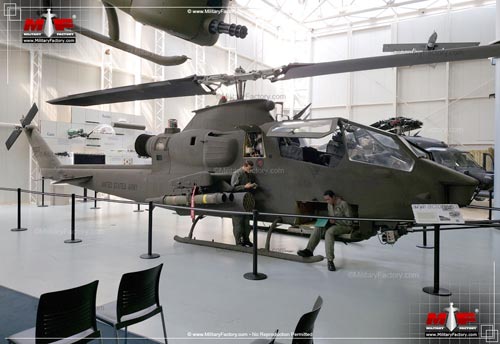 While the helicopter was already being developed into a viable battlefield contributor during the days of World War 2 (1939-1945), it was not until the Korean War (1950-1953) that its service was entrenched. The Vietnam War (1955-1975) only served to further its use to which the aerial transport was now evolved to become an "air cavalry" platform to ferry combat-ready infantry to-and-from hotspots as needed. However, as the helicopters grew into roles that saw it operate closer and closer to enemy positions (and thus exposed to enemy fire), it was seen fit to arm these types with applicable weaponry and this initiative produced the helicopter "gunship". The iconic American helicopter of the Vietnam War was the Bell UH-1 "Huey" series which still sees service today (2014).

The armed UH-1 was only an interim solution for it lacked appropriate crew protection and the battlefield survivability required. This pressed American helicopter makers into developing more dedicated gunship concepts which led to Bell Helicopters to pursue the D-255 "Iroquois Scout" in 1962. The design incorporated a 40mm chin-mounted automatic grenade launcher, ventral 20mm cannon, and wing-mounted rocket/missile launchers. Its crew of two sat in tandem, helping to promote the slimmest of frontal profiles to make for a harder target to hit head on by ground-based fire. The United States Army liked what it saw and awarded a contract for further development late in the year. An early testbed for the concept was born from a modified Bell Model 47 which became the Model 207 in its finalized form. First flight was in July of 1963.

While a promising venture, the Model 207 was not the soundest of solutions for the growing U.S. Army need. The situation in Vietnam was becoming ever more perilous with a greater American military commitment seen as unavoidable. To further a more final solution, the Army pushed forth the "Advanced Aerial Fire Support System" (AAFSS) as an open competition for its gunship helicopter requirement - the product now being termed an "attack helicopter". One of the key participants of this program became Lockheed and its work begat the infamous AH-56 "Cheyenne" - the company's sole attempt at a helicopter design.

While work slowly progressed on the AH-56, the U.S. Army was still in need of an interim solution for the ongoing war and eventually entertained several possible products from the usual suspects - Bell, Boeing-Vertol, Kaman, Piasecki, and Sikorsky. Bell had furthered along a new attack helicopter concept as a private venture born from the Model 207 and incorporating as many mechanical components of its successful UH-1B/C "Iroquois" series as possible to produce the all-new Model 209. First flight of this product came on September 7th, 1965. In April of 1966, this submission won out against its competitors as it was formally selected for production by the Army under the designation of AH-1G "HueyCobra". As it was considered a direct part of the existing UH-1 line ("H-1"), the HueyCobra was born through the "G" model designation and not the expected "A".

As built, the Model 209 prototype featured a look not unlike its final Cobra attack helicopter form. The pilot and weapons specialist sat in a tandem cockpit (pilot in rear) with a large-area, armored canopy offering excellent vision. The cockpit was set behind a short nose assembly and a turreted weapons station was mounted in a traversing chin fairing. The profile was, of course, as slim as possible and a sole turboshaft engine installed aft of the cockpit. The engine drove a two-blade main rotor overhead and a twin-blade tail rotor at rear. The tail rotor was fitted to portside along the single vertical tail fin. Horizontal planes were featured along the sides of the tail stem. Wingstubs sat at the sides of the fuselage to provide an inherent weapons-carrying capability. The undercarriage was of a retractable skid arrangement. The Army offered up some revisions to the Model 209 before serial production ensued and these included a lighter weight plexiglass canopy, a shift of the portside tail rotor to starboard, fixed landing skids, and wider main rotor blades.
Advertisements

The incoming AH-1G models were outfitted with a single Lycoming T53-L-13 series turboshaft engine of 1,100 shaft horsepower. This provided a maximum speed of 170 miles per hour with a range out to 360 miles, a service ceiling of 11,400 feet, and a rate-of-climb of 1,230 feet per minute. Armament centered on the M28 chin turret mounting 2 x 7.62mm Miniguns or 2 x 40mm M129 grenade launchers (or a mix of the two). Wingstubs supported 7- or 19-shot 2.75" rocket pods or 7.62mm Minigun pods or the XM195 20mm cannon pod. Anti-tank missile support was not added until future versions were developed.

The AH-1G was delivered from June 1967 onwards and were pressed into service during the Vietnam War by 1968. Their battlefield roles went beyond simply escorting air cavalry birds for they also offered Close-Air Support (CAS) service through a mix of weaponry options. They could loiter over contested regions and attack exposed enemy infantry or targets of opportunity as needed. Within time, more organized outings utilized scout helicopters ahead of the main Cobra attack force to help reveal enemy positions. By the end of the war, over 1,000 HueyCobras were built and an anti-tank version was in the works for 1972 - producing the "AH-1Q" mark. About 300 or so Cobras were lost in the fighting of Vietnam to both enemy fire and accident.

The United States Marine Corps, in need of a similar attack helicopter system, took interest in the Cobra and evaluated the AH-1G model for its own purposes. This led to a 1968 order for 49 helicopters in the twin-engine AH-1J "SeaCobra" guise - the primary difference being installation of the Pratt & Whitney Canada T400-WV-402 turboshaft engine of 1,800shp - two PT6 turboshafts mated through a single transmission system. The chin turret (M197) housed a Gatling-style 20mm cannon unlike the combination turrets of the U.S. Army mounts. The design eventually spawned the much improved AH-1W SuperCobra line.

While the Lockheed AH-56 Cheyenne program sputtered and eventually fell to naught, the Bell HueyCobra made for itself a lasting legacy with its showing in the Vietnam conflict. It became a staple of U.S. Army and USMC service for decades to come and was further pressed in action during the notable American military commitments of the 1980s (Grenade, Panama) and the 1990s (Operation Desert Storm, Haiti, Somalia). The loss of the AH-56 was lessened some by the arrival of the Hughes AH-64 "Apache" series - a truly dedicated anti-armor solution of the Cold War - and this line helped to reduce the Army reliance on the AH-1 moving forwards. The USMC still favored their AH-1s and chose to consistently upgraded the type to meet the demands of the modern battlefield (the aforementioned AH-1W "SuperCobra" and the modern AH-1Z "Viper" were such products). Ex-Army AH-1s were passed on to American allies around the world while some were retained by U.S. governmental firefighting services.

The effectiveness of the AH-1 in a war environment helped to push its value as an export product and a select group ultimately took the type into inventory - Bahrain, Israel, Japan, Jordan, Pakistan, South Korea, Spain (as the "Z.14"), Thailand, and Turkey. Israeli AH-1s were eventually replaced by AH-64s in time (and served with the Israeli Air Force) while Japanese AH-1S models and manufactured under license through Fuji Heavy Industries from 1984 to 2000.

In all, there proved few variants after the original Bell 209 prototype and the initial AH-1G production models. AH-1Q of 1973 became an interim anti-tank model supporting the TOW anti-tank missile system with improved cockpit weapons equipment. Some 92 AH-1G models were converted to the Q standard. The AH-1S mark was the AH-1Q with a new T53-L-703 series turboshaft engine of 1,800 shaft horsepower and improved "hot and high" performance deemed a weak point in earlier marks. The AH-1S mark instituted a series of progressing changes that ultimately yielded some four subvariants all its own - AH-1(MC), AH-1S(MOD), AH-1P, and AH-1E. QAH-1S became a target drone conversion airframe. AH-1P introduced a glass cockpit, improved low-altitude flight, and composite-based rotor assemblies. The AH-1E brought along a much improved armaments system which included the M197 20mm three-barreled chin cannon. AH-1F were modernized Cobras with the additions of the P- and E-models as well as introduction of a laser rangefinder, IR jammer equipment, more digital dependency, and a cockpit Head-Up Display (HUD). Total HueyCobra/Cobra production numbered 1,116 examples.

Twin-engine variants evolved along their own line beyond the original AH-1J "SeaCobra" and included the AH-1T "Improved SeaCobra", the AH-1W "SuperCobra", and the AH-1Z "Viper". The SuperCobra first flew in 1969 and was introduced in 1971 with the USMC. Over 1,270 of this line were built in all. The ultimate Cobra attack form is the Viper which entered USMC service as recently as 2010.

(Showcased performance specifications pertain to the Bell AH-1G Cobra production variant. Compare this aircraft entry against any other in our database or View aircraft by powerplant type)
STANDARD (AH-1G):
M28 Turret: 2 x 7.62mm Miniguns OR 2 x 40mm M129 grenade launcher or mix of both. 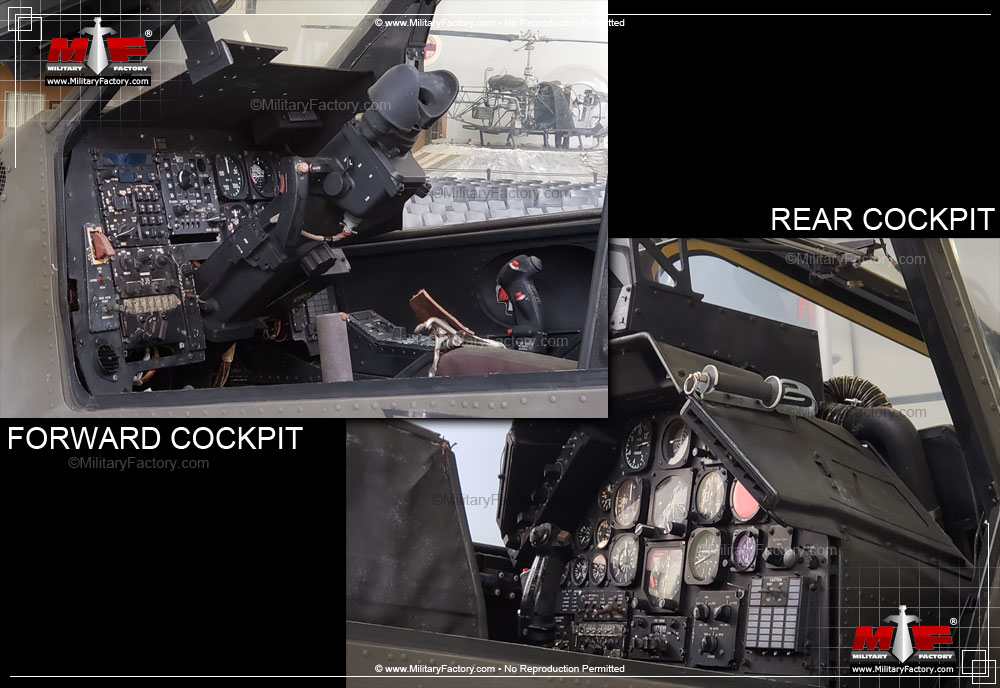 General Assessment
Firepower
Performance
Survivability
Versatility
Impact
Values are derrived from a variety of categories related to the design, overall function, and historical influence of this aircraft in aviation history.
Overall Rating
The overall rating takes into account over 60 individual factors related to this aircraft entry.
96
Rating is out of a possible 100 points.
Firepower Index (BETA) 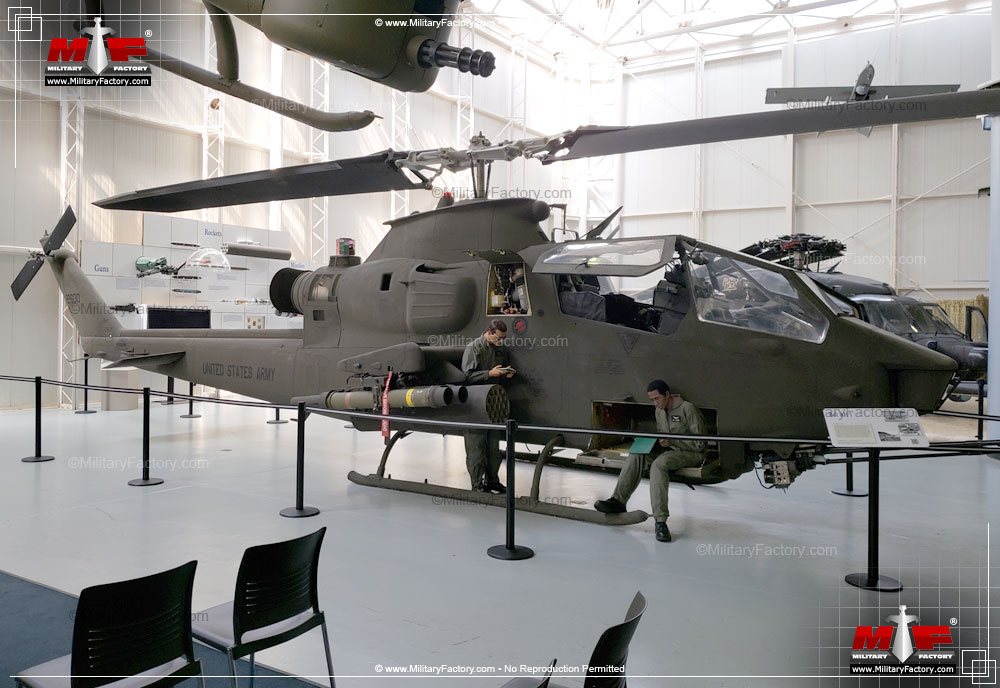 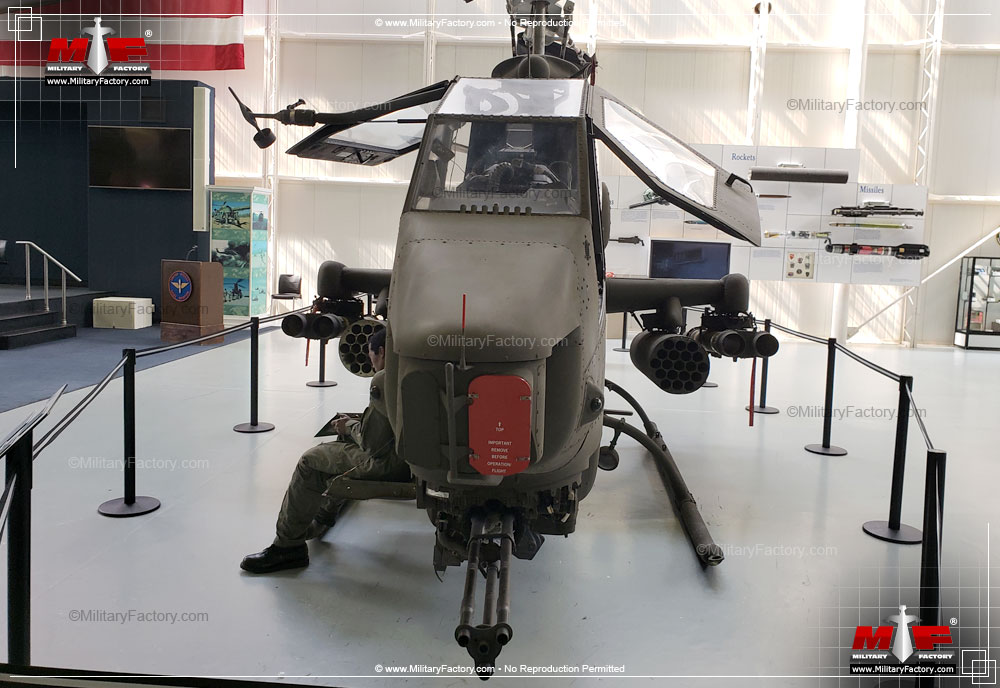 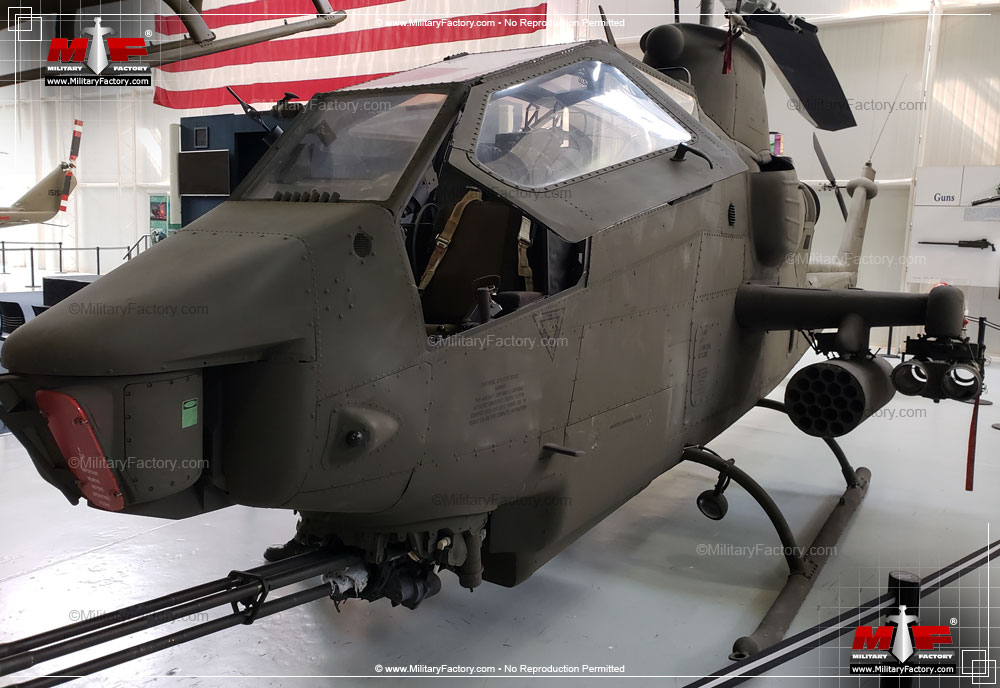 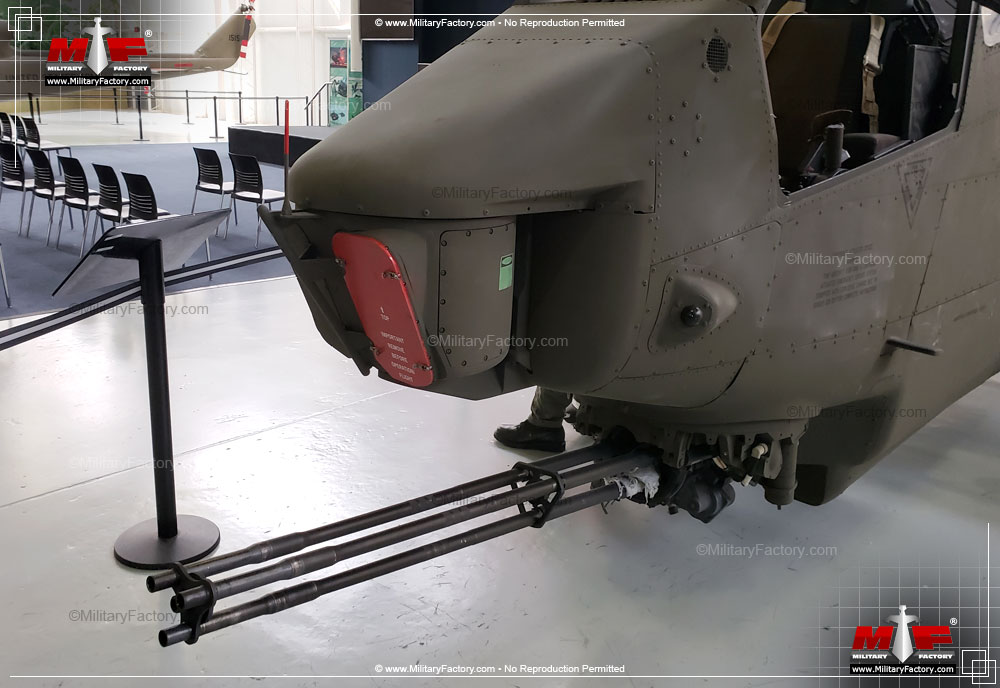 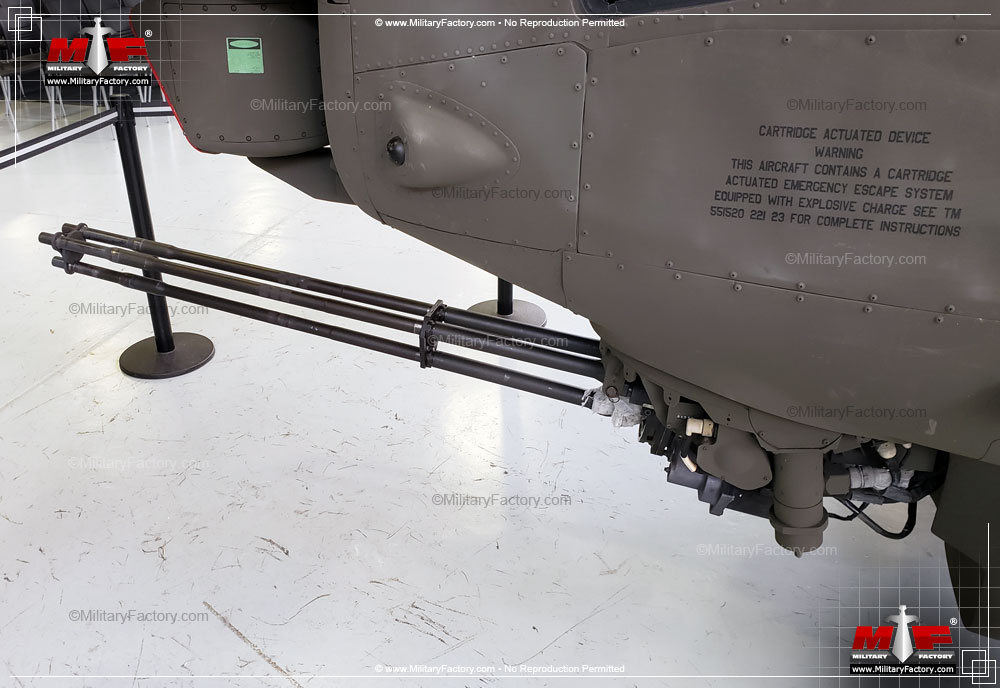 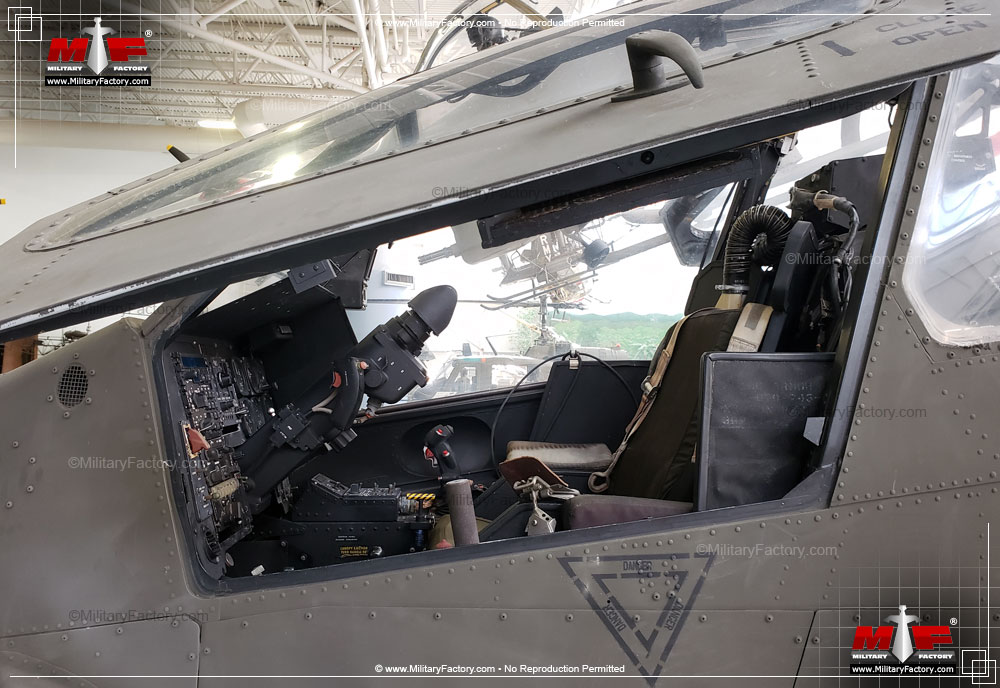 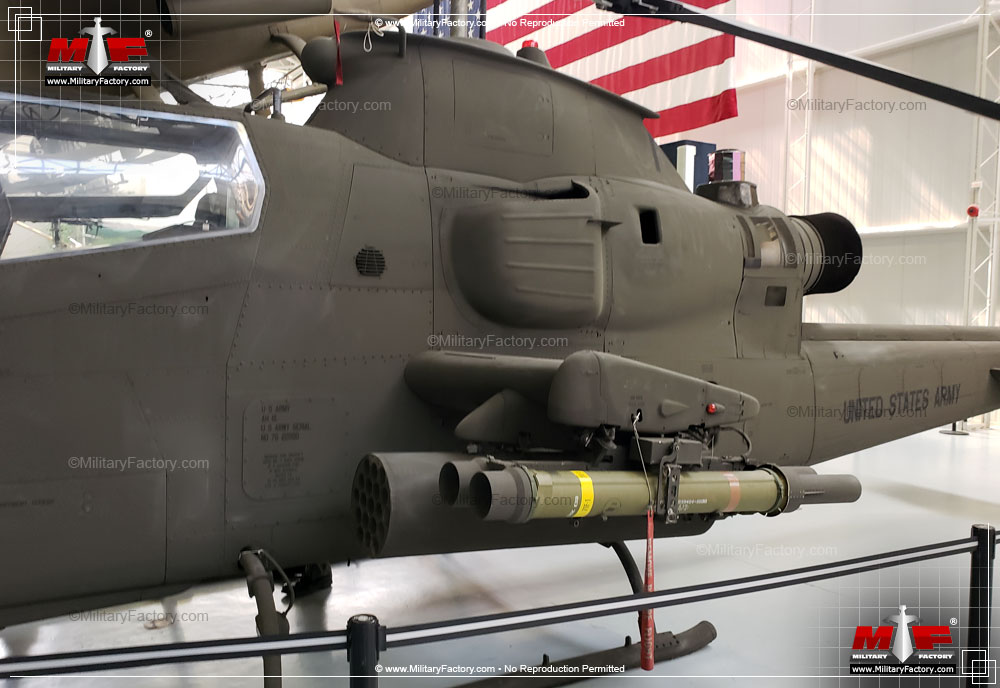 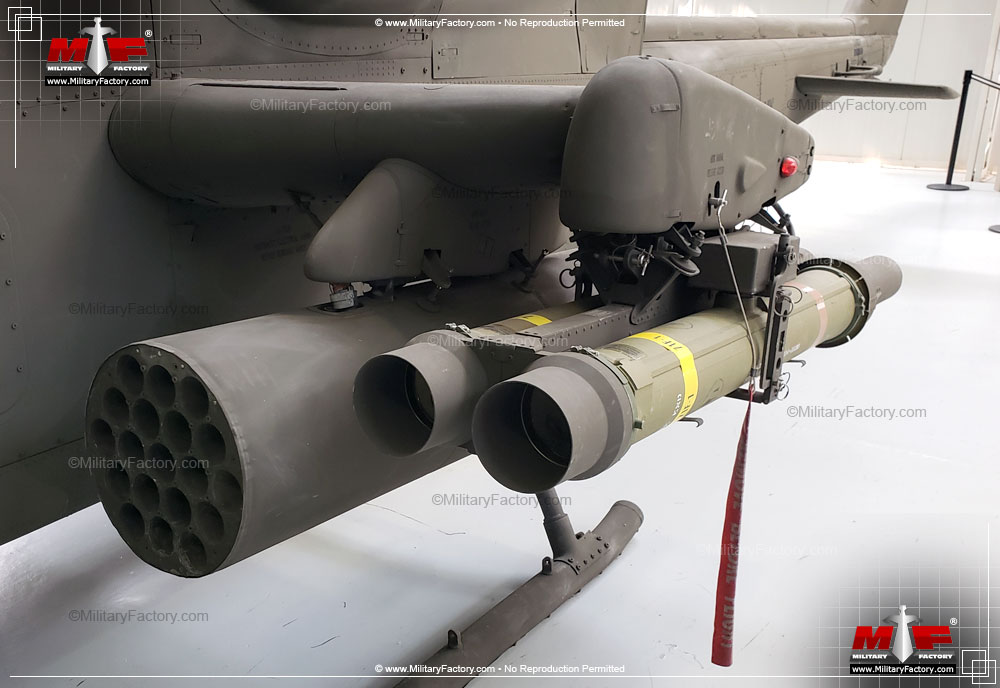 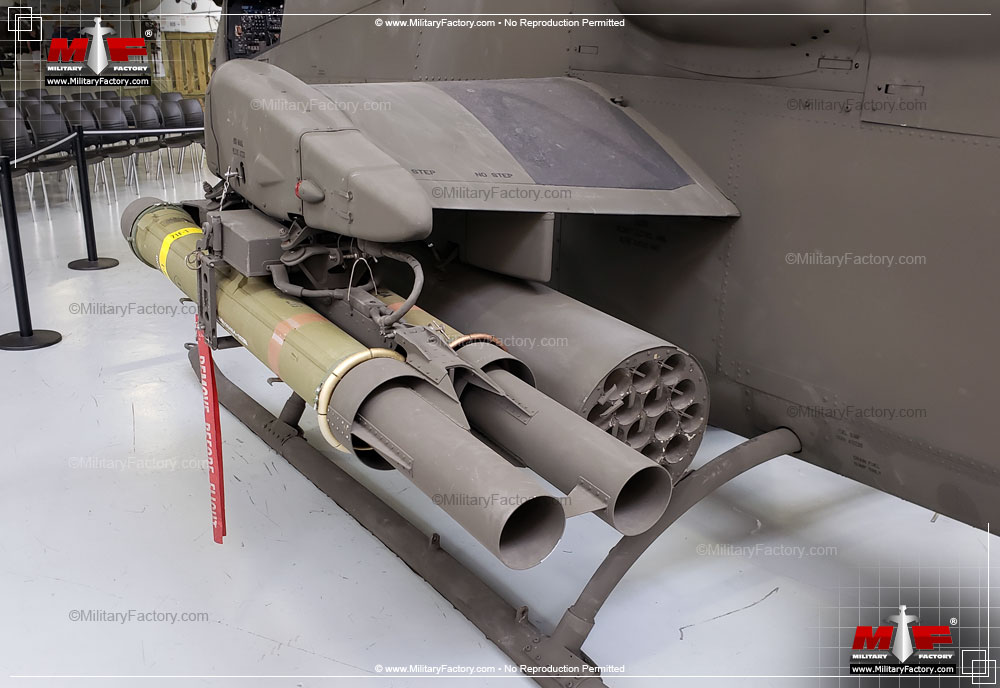 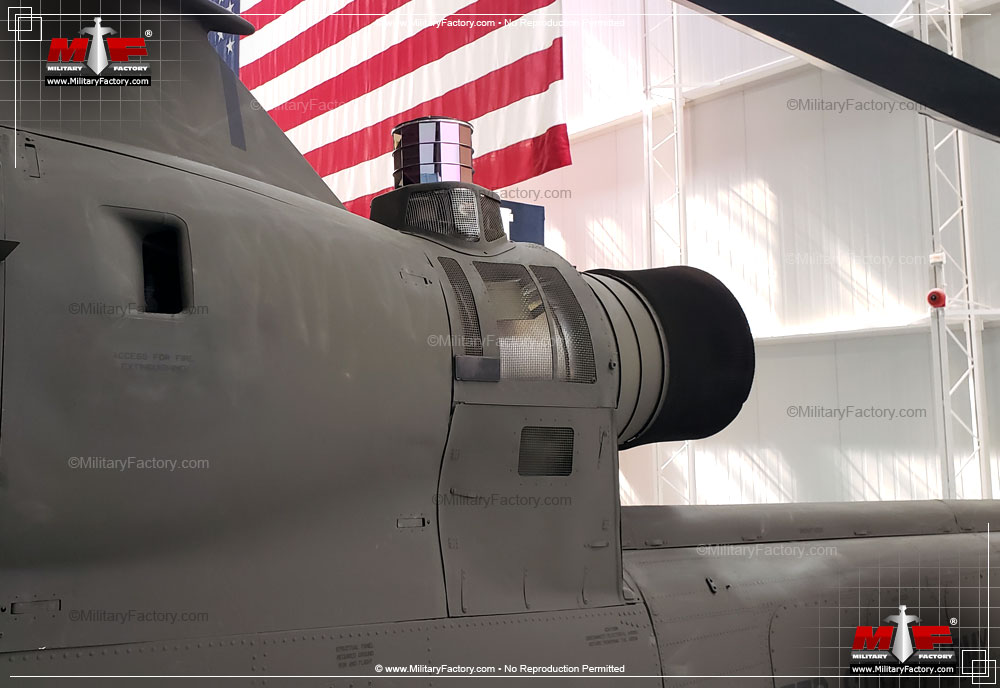 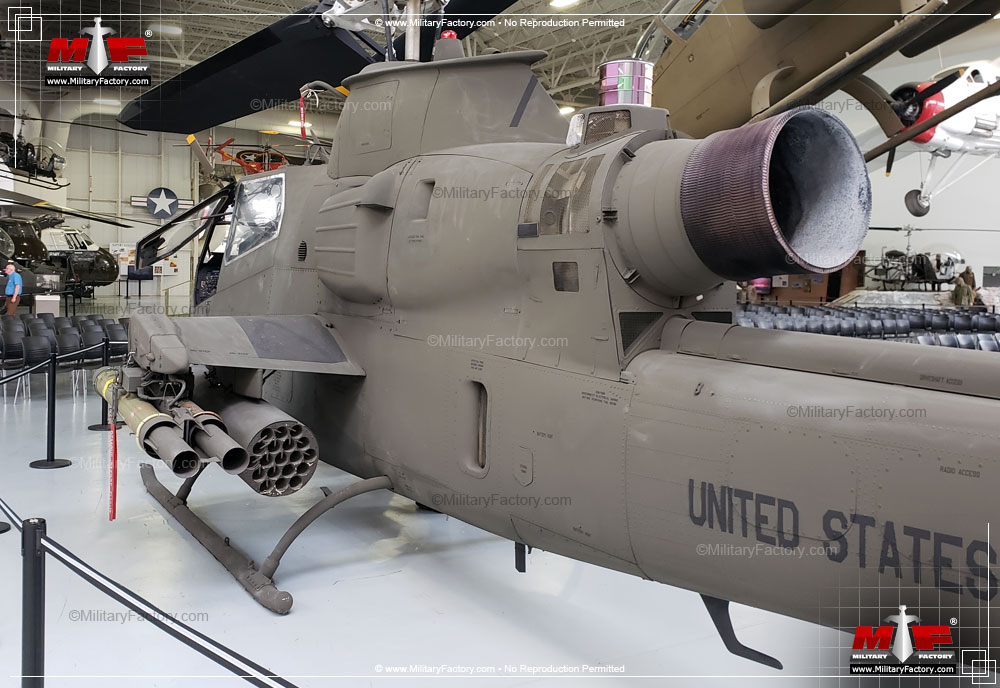 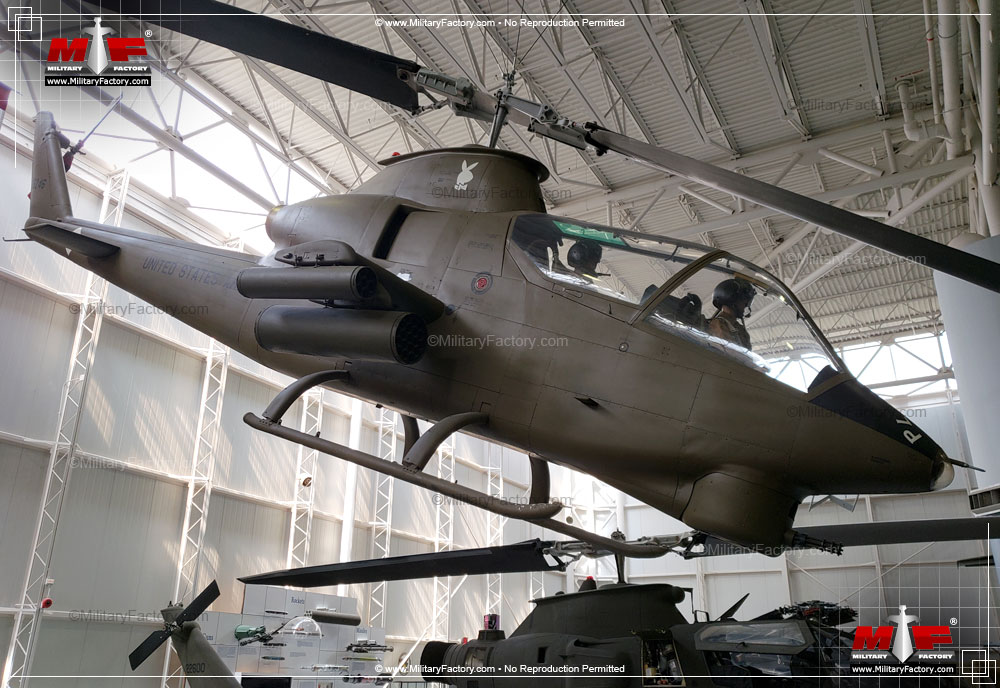 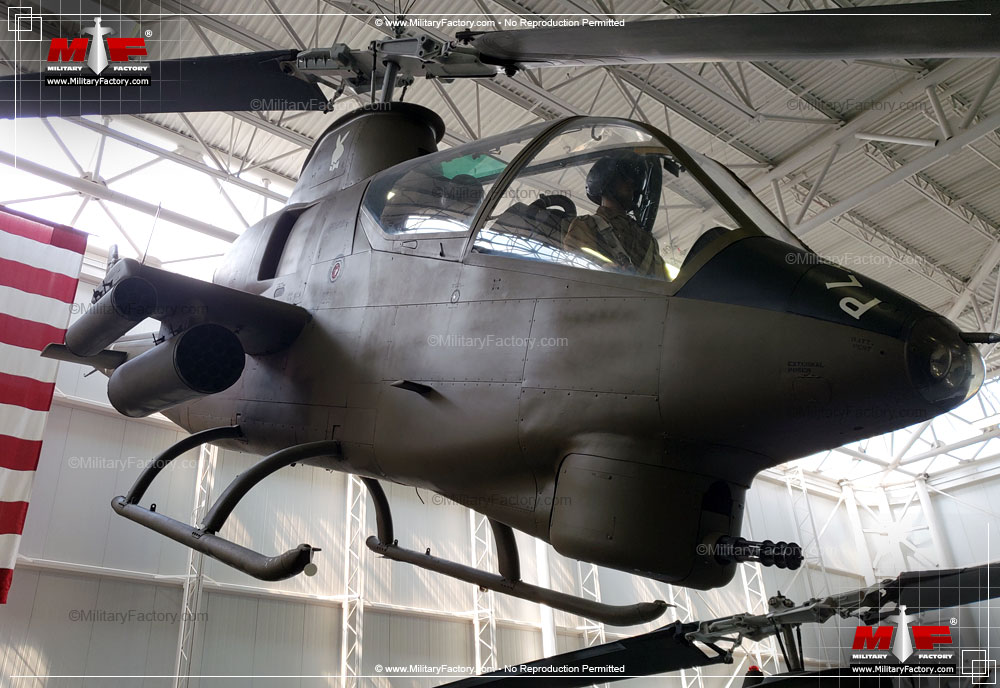 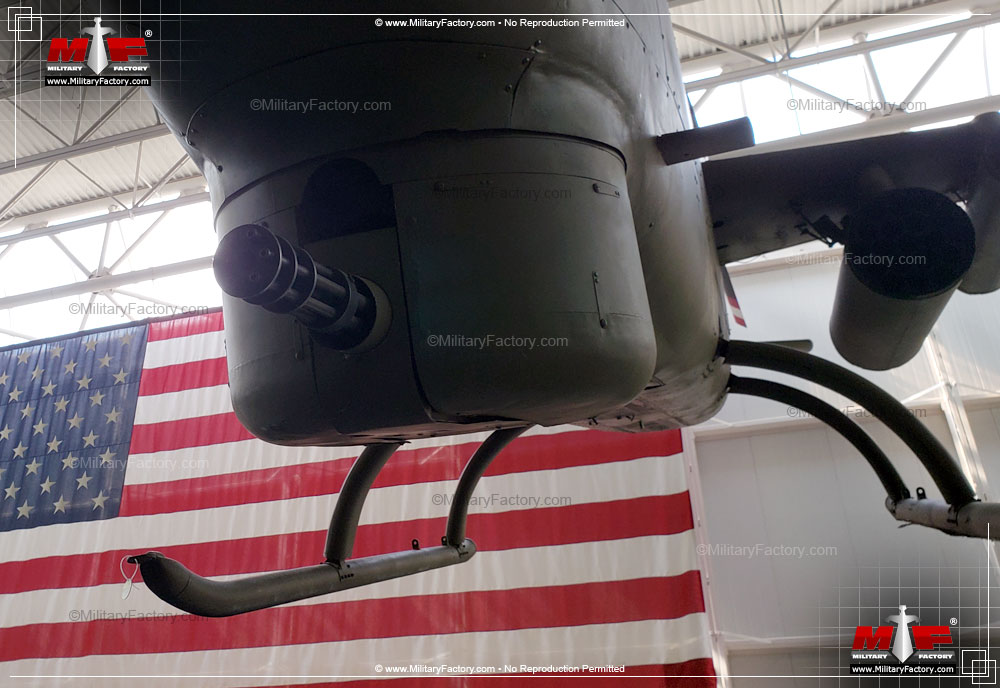 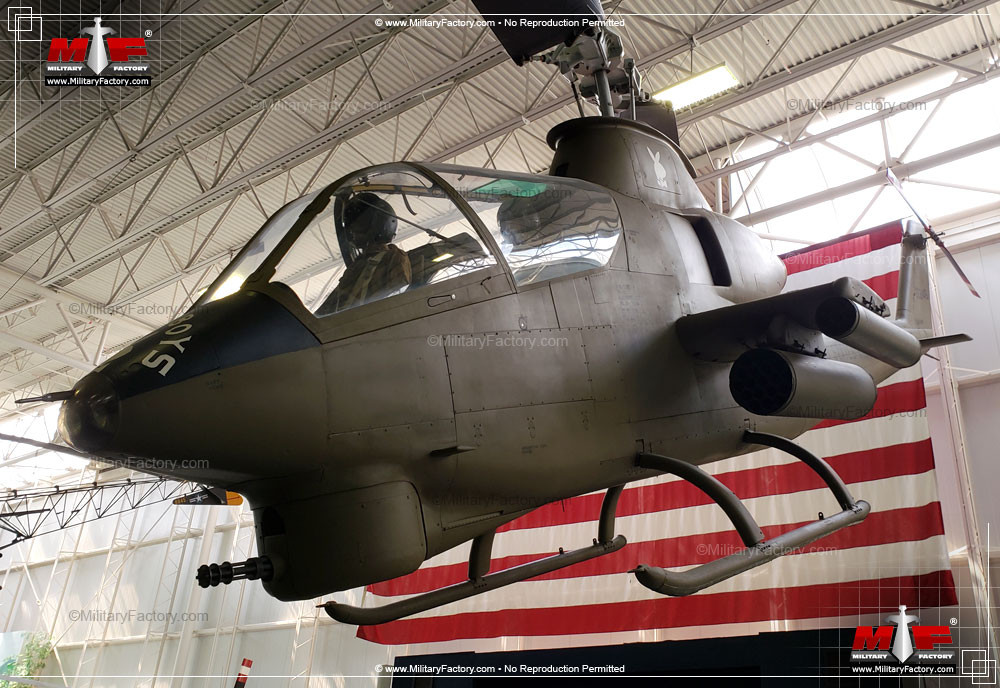