The Bell AH-1Z Viper is the ultimate form of the original Vietnam-era AH-1 HueyCobra attack helicopter.

Authored By: Staff Writer | Last Edited: 04/20/2022 | Content ©www.MilitaryFactory.com | The following text is exclusive to this site. 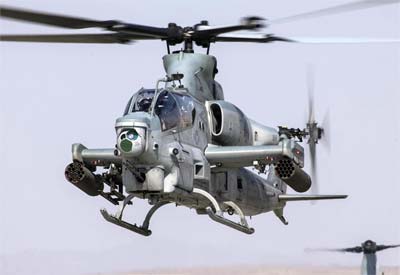 The AH-1Z "Viper" is the latest and most potent form of the Vietnam War-era AH-1 Cobra helicopter debuted in the late 1960s. During development of the single-engine AH-1 for the United States Army, the United States Marine Corps USMC expressed interest in a twin-engine arrangement of the same attack platform which gave rise to the AH-1J "SeaCobra" offshoot introduced in 1971. The line ultimately begat an entire family of twin-engine attack platforms all related to the original AH-1 with over 1,270 SeaCobras, and the related SuperCobra, produced.

The Viper form represents an extension of the AH-1W SuperCobra line for the USMC, intending to keep the product a viable battlefield component into the next several decades. The AH-1Z includes a composite four-blade main rotor and four-blade tail rotor assemblies (bearingless) driven by 2 x General Electric T700 series turboshaft engines. Performance is enhanced as a result and the added power provides a higher operating weight than in previous Cobra iterations. Many of its onboard systems have been updated and some all-new equipment has been fitted for improved battlefield survivability and situational awareness. The cockpits are now dominated by a pair of Rockwell Collins LCDs and allows for the helicopter to be piloted from either seat. All pertinent mission parameters are showcased through the color displays. A digital 3D map allows for improved navigation. One of the key additions to the Cobra line is use of Helmet Mounted Displays (HMDs) manufactured by BAe Systems (as the "Striker"). The helmets are also used to showcase mission parameters, flight data, and the like as well as being linked to the onboard weapons system for target cueing. The wingstubs have been extended and offer all-modern support for supported USN/USMC ordnance including guided and precision weaponry.

First flight of the AH-1W was on December 8th, 2000 and three prototypes were evaluated into 2003. The USMC marked some 180 AH-1Ws for conversion to the newer AH-1Z standard with the initial production models received in 2005. Some 28 examples have been delivered to date (2014) with the final airframes expected prior to 2019. During 2008, production was modified to include the final 40 helicopters as "new build" models (and not conversions of existing airframes) while and an add-on order for the USMC followed in September of that year to bring its total procurement to 189.

As finalized, the AH-1Z is outfitted with 2 x General Electric T700-GE-401C turboshaft engines developing 1,800 shaft horsepower each. Performance numbers include a maximum speed of 255 miles per hour, a range out to 425 miles, a service ceiling of over 20,000 feet, and a rate-of-climb of 2,800 feet per minute.

The helicopter continues the slim profile appearance established by the original AH-1 Cobra of the Vietnam War years. The tandem-seat cockpit seats the pilot in the rear with the weapons officer at front. The tail rotor unit is set to the portside unlike the starboard-side facing of the original Cobra and the follow-up SuperCobra. The undercarriage is of the fixed skid arrangement as in the orignal. The wingstubs feature three hardpoints apiece (six total) and can mount the AGM-114 Hellfire anti-tank missile, the AIM-9 Sidewinder air-to-air missile, and the 2.75" Hydra 70 rocket pod in a seven- or nineteen-shot count. The standard armament remains the 20mm M197 three-barreled Gatling-style cannon in the A/A49E powered chin turret. Fire control is assisted through the Lockheed Martin/Northrop Grumman AN/APG78 "Longbow" radar system.

The AH-1Z "Viper" was formally introduced during 2010. For a short time, the helicopter was under consideration by the government of South Korea as its next standard attack helicopter until the decision was reached in 2013 to pursue the AH-64E Apache instead.©MilitaryFactory.com
Note: The above text is EXCLUSIVE to the site www.MilitaryFactory.com. It is the product of many hours of research and work made possible with the help of contributors, veterans, insiders, and topic specialists. If you happen upon this text anywhere else on the internet or in print, please let us know at MilitaryFactory AT gmail DOT com so that we may take appropriate action against the offender / offending site and continue to protect this original work.

April 2016 - It was announced that the nation of Pakistan had ordered nine AH-1Z Viper helicopters along with fuel kits. The order includes the AGM-114R "Hellfire II" series anti-tank missile. The helicopters are expected to be ready for delivery before the end of 2018.

May 2018 - Bahrain is the latest adopter of the AH-1Z attack helicopter platform. In a deal approved by the United States under the Foreign Military Sales banner in early May, the gulf state will receive a fleet of twelve helicopters including support and various associated munitions (like the Advanced Precision Kill Weapon Systems II guided rockets and AGM-114 "Hellfire" anti-tank missiles). Bahrain currently operates an aging fleet of some twenty-two late-model AH-1 Cobras.

December 2018 - The Viper is a contender for a Japanese attack helicopter requirement. Up to fifty will be required to replace an aging fleet of AH-1S Cobra models.

January 2019 - The USMC has placed an order for twenty-five additional AH-1Z attack helicopter models. The deal is worth $439.5 million USD and make up the Lot 16 production phase of the program. The work is expected to be completed by early 2022.

March 2019 - The AH-1Z Viper is in the running to satisfy a Japanese Defense requirement for a New Attack Helicopter (NAH).

May 2019 - The Czech Republic is eyeing the Bell UH-1Y, Bell AH-1Z, and Sikorsky UH-60M "Black Hawk" helicopters as potential replacements for its aging fleet of Soviet-era Mi-24 helicopters.

July 2019 - The Australia military is actively seeking a replacement for its fleet of twenty-two Tiger ARH attack helicopters currently in service. A successor is being sought for operations as soon as 2025-2026 with some twenty-nine new units to be procured. Inline to replace the series is a modernized Tiger ARH from Airbus Helicopters, the American Bell AH-1Z "Viper", and the American Boeing AH-64 "Apache" lines.

December 2019 - The Czech Republic has been named a new operator of the AH-1Z 'Viper' twin-seat attack helicopter series through an order of four of the mark. This is in addition to eight UH-1Y 'Venom' utility types also being purchased. These will be used to succeed an aging stock of Soviet-era Mil Mi-24 'Hind' gunship helicopters.

April 2020 - The U.S. State Department has approved a sale of six AH-1Z models to The Philippines alongside six Boeing AH-64E "Apache" attack types. The nation will review both side-by-side and make a final selection.

September 2020 - The Bell AH-1Z is a potential contender for a standing Australian attack helicopter requirement seeking to succeed an aging stock of Eurocopter (Airbus) Tiger types.

June 2021 - A USMC AH-1Z attack helicopter has been fitted with the new Link 16 series tactical data link system by Northrop Grumman. This marks only the second attack helicopter platform to receive the capability.

October 2021 - U.S. NAVAIR has taken delivery of the first of 12 AH-1Z Viper attack helicopters destined for for the nation of Bahrain.

April 2022 - The U.S. has approved the sale of 12 AH-1Z attack helicopters to the nation of Nigeria.

VERTICAL TAKE-OFF / LANDING (VTOL) Series has a tactical capability to take-off and / or land vertically, a quality commonly associated with helicopters.
RADAR-CAPABLE Houses, or can house (through specialized variants), radar equipment for searching, tracking, and engagement of enemy elements.
COUNTERMEASURES Survivability enhanced by way of onboard electronic or physical countermeasures enacted by the aircraft or pilot/crew.
ARMORING Survivability enhanced by armor allocated to protect pilot / crewspaces and / or critical operating systems.
MULTI-ENGINE Incorporates two or more engines, enhancing survivability and / or performance.
RUGGED AIRFRAME Inherent ability of airframe to take considerable damage.
CREW-MANAGED Beyond a pilot, the aircraft takes advantage of additional crew specialized in specific functions aboard the aircraft.
ENCLOSED CREWSPACE(S) Features partially- or wholly-enclosed crew workspaces.

(Showcased performance specifications pertain to the base Bell AH-1Z Viper production variant. Performance specifications showcased above are subject to environmental factors as well as aircraft configuration. Estimates are made when Real Data not available. Compare this aircraft entry against any other in our database or View aircraft by powerplant type)
STANDARD:
1 x 20mm M196 three-barreled Gatling-style cannon in powered chin turret.

(Not all ordnance types may be represented in the showcase above)
Hardpoint Mountings: 6 (including wingtips)
Mounting Points 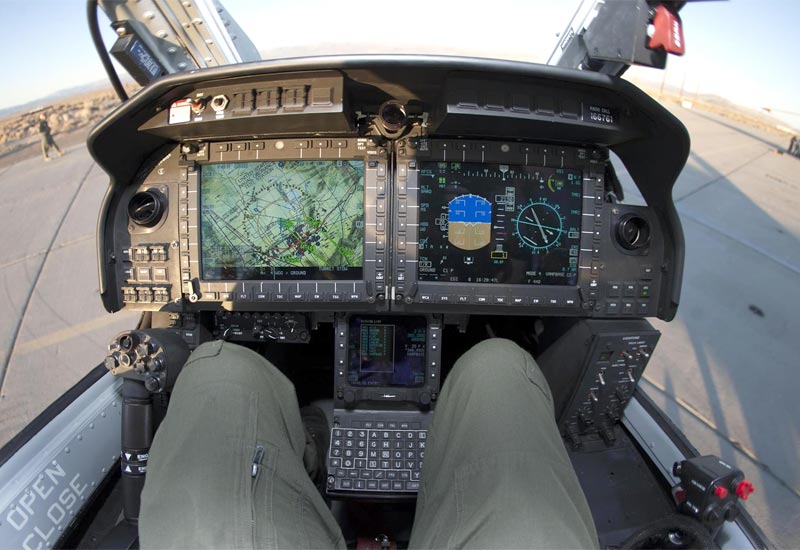 General Assessment
Firepower
Performance
Survivability
Versatility
Impact
Values are derrived from a variety of categories related to the design, overall function, and historical influence of this aircraft in aviation history.
Overall Rating
The overall rating takes into account over 60 individual factors related to this aircraft entry.
84
Rating is out of a possible 100 points.
Firepower Index (BETA) 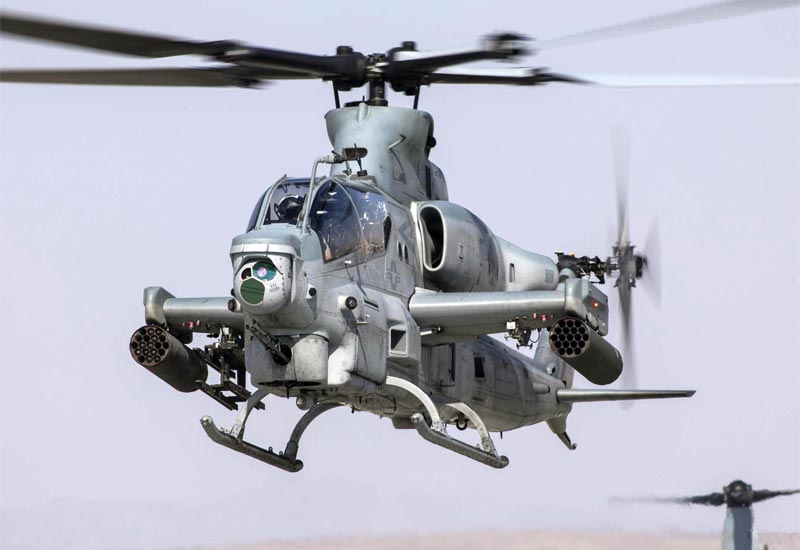 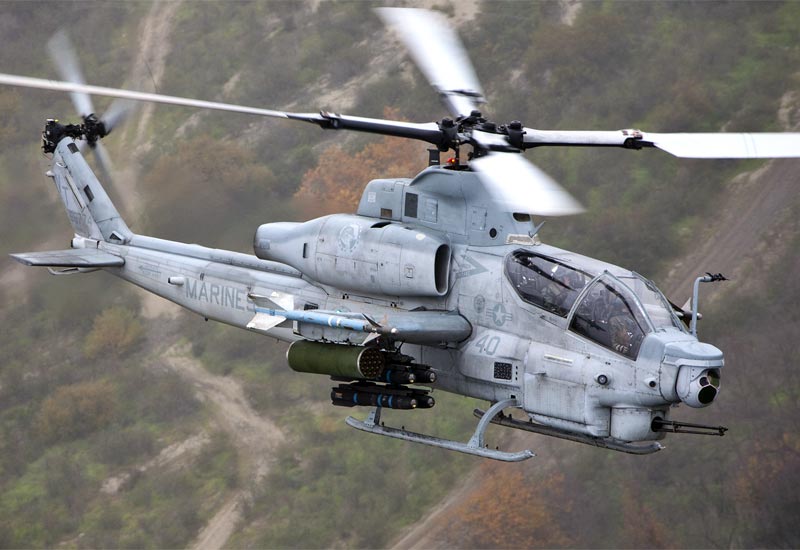 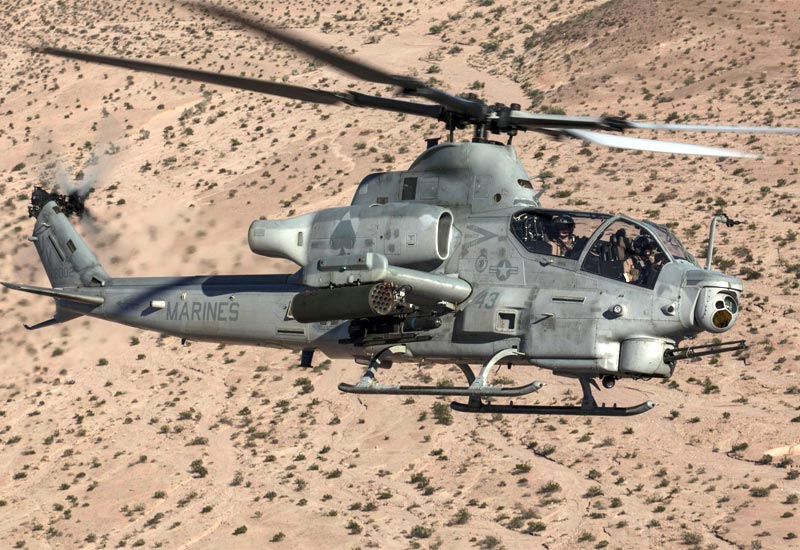 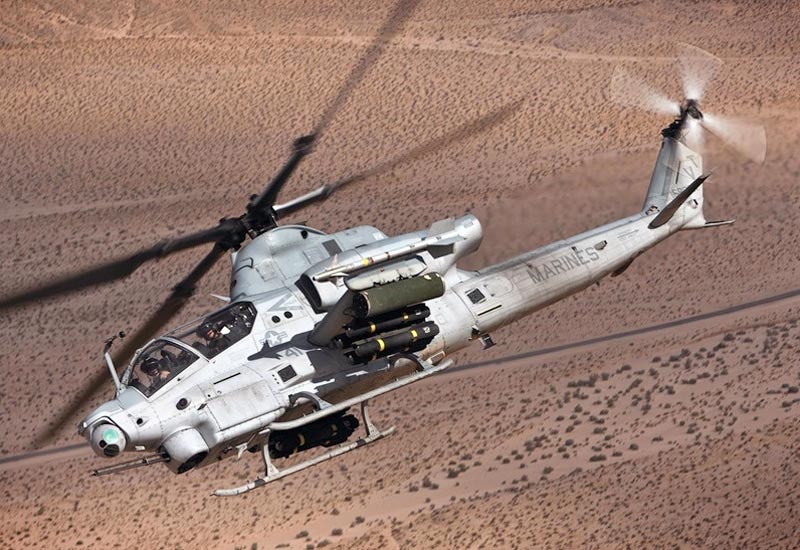 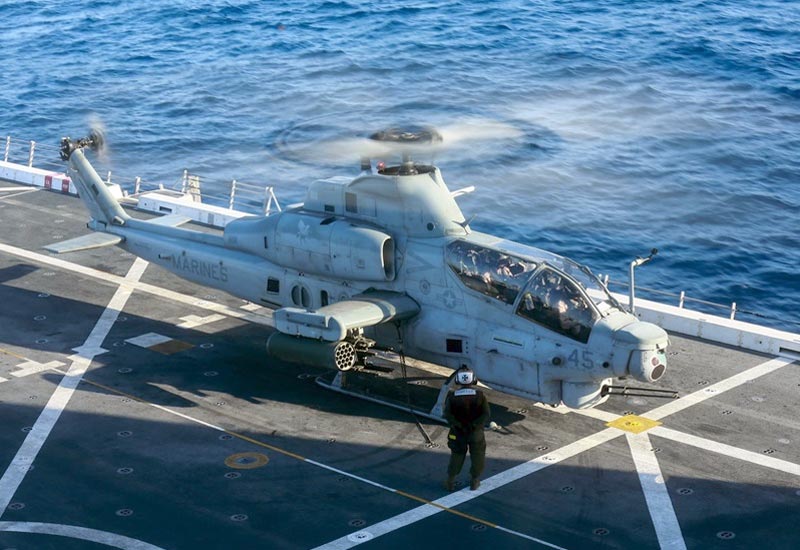 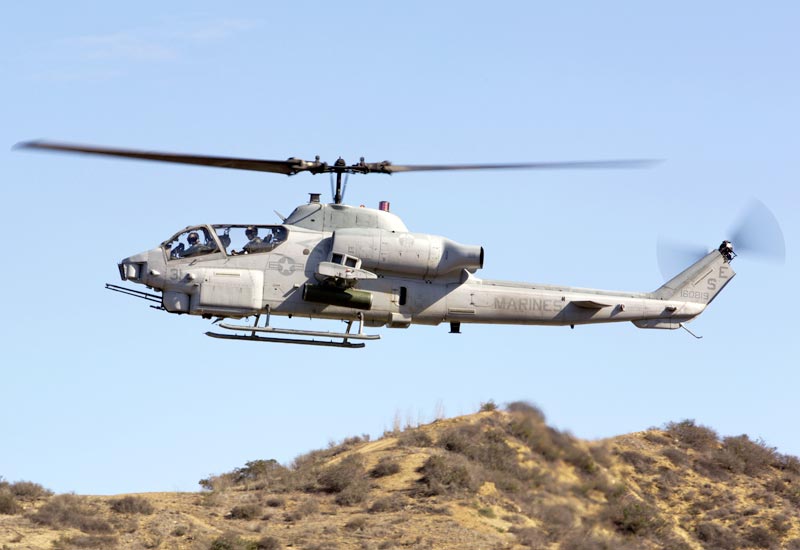 Aviation developments of similar form and function, or related to, the Bell AH-1Z Viper...