As proved common for the RCAF in the Cold War period, an American fighter design was adopted for local production - the Canadair CF-5 being one of them.

Authored By: Staff Writer | Last Edited: 07/05/2018 | Content ©www.MilitaryFactory.com | The following text is exclusive to this site. 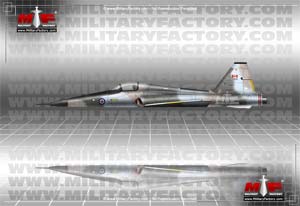 When it came time for the Royal Canadian Air Force (RCAF) to upgrade it aged stock of 1950s-era fighter/fighter-bombers, it selected the lightweight, low-cost American Northrop F-5 "Freedom Fighter" as the CF-5 (officially as the "CF-116") with local production through Canadair. The Canadian version differed by improved short-field operations (through a "two-position" nose leg), an in-flight refueling probe being added to the nose, an interchangeable nose assembly (to serve either fighter or reconnaissance roles), an improved navigation suite, and Orenda (General Electric) J85-15 series engines. First flight of the CF-5 occurred during 1968 and service entry followed that year on November 5th. 220 of the type were eventually realized and these also went on to serve with the air forces of the Netherlands and Venezuela and a few other operators. Dutch NF-5s arrived in March of 1969.

The changes to the original F-5 were issued to suit RCAF requirements and went on to produce a more improved product form from the original American offering. Runway take-off distances were reduced due to the new nose leg which allowed for increased lift by varying the angle of attack. The in-flight probe allowed for extended mission endurance windows of airborne squadrons and the new navigation system was of a more advanced design. Local engine manufacture meant that local Canadian aero industry benefitted while airframes emerged from both Canadian and Dutch factories through a partnership with Fokker of the Netherlands (the initial 31 fuselages were from Fokker). The interchangeable nose assembly allowed a "quick change" feature for the basic fighter-minded nose section to that of a camera-laden, reconnaissance-minded assembly - all the while the aircraft retained its combat capability.

The Canadian-Dutch agreement was signed in 1967 which spread out some of the production between the two nations while early Belgian interest in the CF-5 ultimately fell to naught leaving just the two players. Canadair retained a long-running history in regards to production of American-designed aircraft, the listing included the North American F-86 "Sabre" (as the CL-13), the Lockheed T-33 "Shooting Star" (as the CT-133 "Silver Star"), and the Lockheed F-104 "Starfighter" (as the CF-104).

As built, the CF-5 exhibited a running length of 47 feet, a wingspan of 25.9 feet, and a height of 13 feet. Externally, it showcased nearly the same design lines as the original Northrop F-5 product, requiring an attentive observer to truly identify physical differences between the two designs. Power was through 2 x Orenda J85-15 turbojet afterburning engines of 4,300lbf which provided a maximum speed of Mach 1.3 (approximately 980 miles per hour), a range out to 660 miles, a service ceiling up to 41,000 feet, and a rate-of-climb of 34,400 feet per minute.

Initial Canadian production models were the CF-5A single-seaters of which 89 were built and designated formally as CF-116A. The CF-5A(R) was the single-seat reconnaissance form and operated under the CF-116A(R) designation. The CF-5D was a two-seat model reserved for training and numbered 46 examples. Canadian CF-5s were retired in full by 1995. Several CF-5s were retained for display purposes throughout Canada.

The Royal Netherlands Air Force followed suit with both single-seat and two-seat forms - 75 of the NF-5A were produced along with 30 of the NF-5B respectively. This stock was eventually sold off to Greece, Turkey, and Venezuela with the introduction of Dutch General Dynamics F-16 "Fighting Falcons". The last NF-5 was removed from frontline service in 1991.©MilitaryFactory.com
Note: The above text is EXCLUSIVE to the site www.MilitaryFactory.com. It is the product of many hours of research and work made possible with the help of contributors, veterans, insiders, and topic specialists. If you happen upon this text anywhere else on the internet or in print, please let us know at MilitaryFactory AT gmail DOT com so that we may take appropriate action against the offender / offending site and continue to protect this original work.
Advertisements

(Showcased performance specifications pertain to the Canadair CF-5 Freedom Fighter production variant. Performance specifications showcased above are subject to environmental factors as well as aircraft configuration. Estimates are made when Real Data not available. Compare this aircraft entry against any other in our database or View aircraft by powerplant type)
STANDARD, FIXED:
2 x 20mm M39A2 internal cannons over nose.

OPTIONAL:
Up to 7,000lb of externally-mounted stores across five hardpoints to include Air-to-Air Missiles (AAMs), rocket pods and conventional drop (dumb) bombs.

(Not all ordnance types may be represented in the showcase above)
Hardpoint Mountings: 7 (including wingtips)

General Assessment
Firepower
Performance
Survivability
Versatility
Impact
Values are derrived from a variety of categories related to the design, overall function, and historical influence of this aircraft in aviation history.
Overall Rating
The overall rating takes into account over 60 individual factors related to this aircraft entry.
40
Rating is out of a possible 100 points.
Relative Maximum Speed
Hi: 1000mph
Lo: 500mph
This entry's maximum listed speed (979mph). 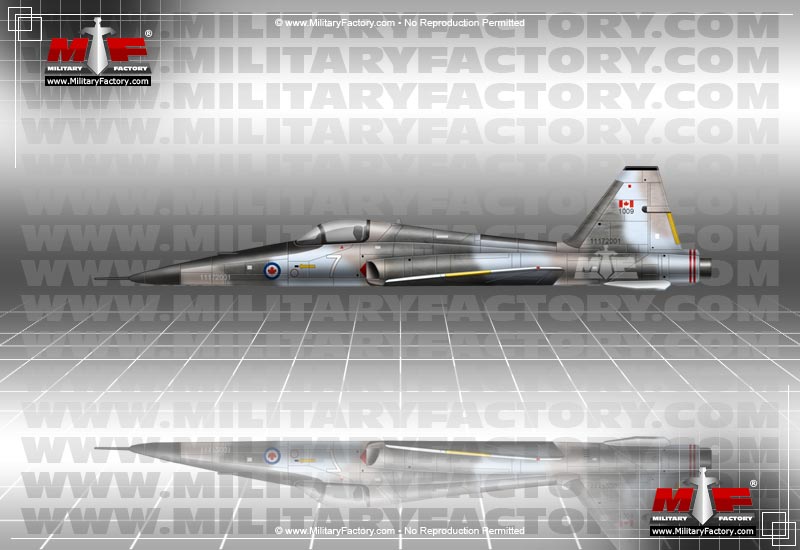