Following the introduction of the American Lockheed F-104 Starfighter came the Canadian equivalent as the CF-104. 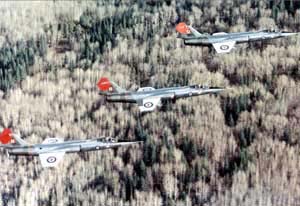 Canadair took to producing several American-originated aircraft during the Cold War decades that included the famous Lockheed T-33 "Shooting Star" two-seat trainer (as the CT-133 "Silver Star") and the North American F-86 "Sabre" (as the CF-13 "Sabre"). To replace the latter in the frontline fighter role, it was, again, decided to adopt an American product through local licensed production - this being the Lockheed F-104 "Starfighter". The F-104 became the CF-104 Starfighter in the Royal Canadian Air Force (RCAF) with production out of Canadair of Montreal.

The original F-104 first flew in March of 1954 and was introduced into USAF service during 1958. The Canadair version followed with a first flight on May 26th, 1961 with service entry beginning in March of 1962. Some 200 of the type were built in all and these served until their replacement came during 1983 in the form of the all-modern McDonnell Douglas CF-18 "Hornet", the Canadian version of the American U.S. Navy's F-18 "Hornet" carrier-based fighter line.

Initially, the Canadian fighter replacement program involved a bevy of existing competitors originating from Britain, France, and the United States - the Lockheed F-104G model being one of them. With Lockheed's ongoing relationship with local Canadian aviation industry by way of Canadair and its CT-133 product, the Lockheed submission edged out the competing submissions. The RCAF then contracted Canadair for 200 of the type in August of 1959 with the initial designation being "CF-111" until becoming the more recognizable "CF-104" identifier.

By and large, the Canadian version of the Starfighter differed little from its American F-104G model counterpart. The aircraft first appeared sans the standard 20mm internal cannon to make for more internal fuel volume in the fuselage and, therefore, extend operational ranges of the aircraft. The undercarriage was slightly revised to suit certain RCAF requirements and an inherent reconnaissance and nuclear strike capability was added. The aircraft could carry air-to-air missiles, rocket pods, and conventional drop bombs as needed including nuclear-tipped ordnance options.

The CF-104 was ordered by the RCAF in two distinct production forms - the base CF-104 was the standard single-seat fighter/fighter-bomber variant while the CF-104D followed as a two-seat trainer. D-models retained the performance numbers of their single-seat cousins, seated two in tandem, and were only ever armed with practice munitions. Due to similarities in the Canadair and Lockheed assembly lines, Lockheed was to receive an additional stock of 140 F-104G model aircraft from Montreal beyond the 200 airframes reserved for the RCAF- such were the similarities between the two aircraft.
Advertisements

Externally, the aircraft retained the same design lines of the F-104G models including their tubular, sleek fuselages, short wing mainplanes, and T-style tail unit. The wings were always of considerable interest to onlookers for they were purposely designed as thin with small-an-area as possible so as to reduce drag at high speeds. While this helped the aircraft achieve its amazing performance for the time, it also forced fuel stores to reside within the body of the aircraft alongside avionics, systems, and the like. A single Avro Canada Orenda J79-OEL-7 afterburning turbojet engine powered the type - so a flameout meant that the pilot had no choice to eject and the aircraft was more or less a total loss beyond that. The engine outputted at 10,000lbf on dry thrust and up to 15,800lbf thrust using afterburner.

Once in practice, the aircraft was quickly arranged for the interception role. As a country, the RCAF had to manage a vast airspace locally as well as support ongoing commitments to NORAD and the United States in North America while also continuing its participation with NATO in Europe. The enemy of the day remained the Soviet Union and incursions into North American and European airspace were commonplace throughout the Cold War years. As such, the high, straight line speed and fast rate-of-climb of the CF-104 played well to the strengths of interception - the aircraft could manage speeds reaching 1,145 miles per hour with a 48,000 feet-per-second rate-of-climb. However, the CF-104 initially proved a handful to fly for Canadian airmen as accidents dotting the career of this memorable aircraft with some resulting in deaths during over a quarter century of use by the RCAF. The operating speeds of the aircraft were also a strongpoint along with its relatively contained profile at any approach angle. The 20mm cannon was eventually added back into the CF-104 design when its nuclear-strike role days were behind it.

Operators of CF-104s beyond Canada became Denmark and Norway. The Turkish Air Force received a stock of ex-RCAF aircraft before the end. All RCAF CF-104s were retired and replaced by the CF-18 Hornet line during the 1980s. Turkish use of the CF-104 ended as recently as 1995.
Advertisements

(Showcased performance specifications pertain to the base Canadair CF-104 Starfighter production variant. Compare this aircraft entry against any other in our database or View aircraft by powerplant type)
STANDARD:
1 x 20mm M61A1 Vulcan internal Gatling-style cannon (omitted in early use).

OPTIONAL:
Up to 4,000lb of externally-mounted stores to include:

General Assessment
Firepower
Performance
Survivability
Versatility
Impact
Values are derrived from a variety of categories related to the design, overall function, and historical influence of this aircraft in aviation history.
Overall Rating
The overall rating takes into account over 60 individual factors related to this aircraft entry.
76
Rating is out of a possible 100 points.
Relative Maximum Speed
Hi: 1200mph
Lo: 600mph
This entry's maximum listed speed (1,146mph). 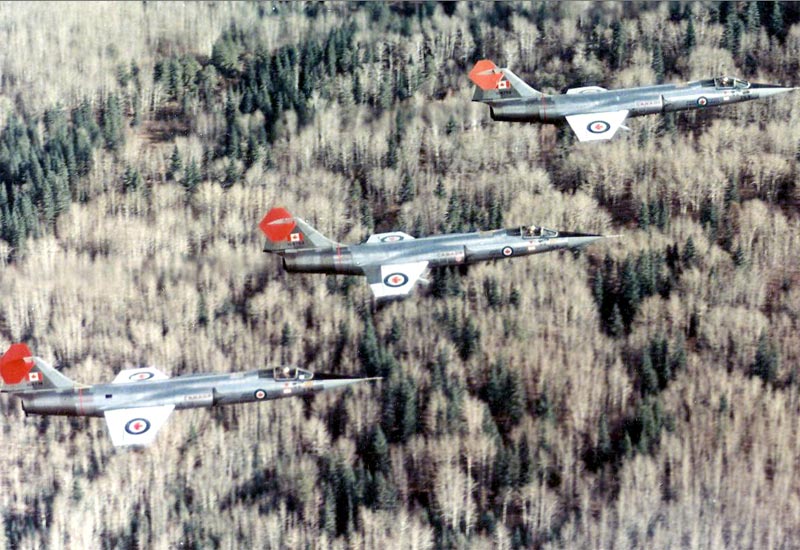