Authored By: Staff Writer | Last Edited: 07/05/2018 | Content ©www.MilitaryFactory.com | The following text is exclusive to this site. 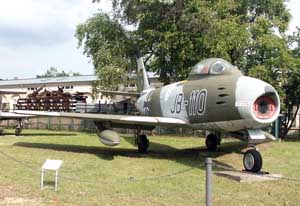 After World War 2, the Royal Canadian Air Force (RCAF) joined other major air services around the globe in re-equipping its fighter fleet with jet-powered types in an effort to replace stocks of outgoing, propeller-driven frontline interceptors and fighters. While Germany and Japan were defeated as the primary world threats, the Soviet Union took over as the global enemy to the West and this pushed development of evermore capable machines to thwart expected invasions and all-out war. For the Canadians, the battlefront would have been home soil against marauding Soviet bombers from the west and in Europe with Soviet forces invading from the East.

While the in-development Avro Canada CF-100 "Canuck" was to become Canada's new jet-powered interceptor, it still lacked a viable replacement for its inventory of World War 2-era fighters. The soundest solution came in 1948 to adopt the newly-minted North American F-86 "Sabre" jet fighter of the United States Air Force (USAF) as the next Canadian fighter mount. The F-86 represented a high-speed, single-seat, agile and stable gun platform that would go on to find success in the upcoming Korean War (1950-1953). Canadair was setup to locally produce the aircraft under license as the CL-13 "Sabre" for the RCAF and this was through a facility arranged in Montreal.

First flight of a Canadian Sabre was on August 9th, 1950 with introduction set to begin by the end of the year. A first batch of ten aircraft served to prove the Canadair lines in Montreal sound and this set the stage for the first mark to originate in the Sabre Mk 1. Only one aircraft was built to this standard with the design faithful to the original F-86A production model. Power was served through the General Electric J47-GE-13 series turbojet engine which outputted at 5,200lbf thrust and armament remained 6 x 0.50 caliber Browning machine guns in two banks of three guns along each side of the nose.

What followed was the first true RCAF production batch as the Sabre Mk 2 of which 350 were manufactured to the F-86E standard. The RCAF received 287 of this group while 60 were shipped to the USAF and a further three went to the Royal Air Force (RAF) in Britain. The Mk 2s began life with largely the same features as the Mk 1 until after the 20th example which then the series went on to include an all-moving horizontal tail surface and power-assisted controls (as in the USAF F-86E).

Canadair then constructed a Sabre form with the local Avro Orenda 3 turbojet engine in the Sabre Mk 3 variant. A single airframe was used to prove the mating sound and this required some slight alterations to the airframe to suit the new engine installation. By and large, the aircraft retained its form and function when compared to the Mk 2s prior.

From this test-minded Mk 3 was born the Sabre Mk 4 variant of which 438 total aircraft emerged from production. However, 428 of this stock was shipped for service with the RAF with only ten retained for the RCAF. Based on the F-86F Sabre, the subsequent Sabre Mk 5 was fitted with the Canadian Orenda turbojet - 370 of this mark were all delivered to the RCAF for service. Numbers were further strengthened through the 655 Sabre Mk 6 models that followed - 390 going to the RCAF.©MilitaryFactory.com
Advertisements

By the end of her evolution, the Canadair Sabre was cleared to carry its standard machine gun battery and had a rocket launching provision added as well as support for conventional drop ordnance and missiles. The 6 x 0.50 caliber guns fed from an ammunition load of 1,602 rounds and the guns were buried in the sides of the fuselage along the nose-mounted ductwork aspirating the engine within. Only the oval gun ports were visible as the guns were wholly shrouded by the side panels on the aircraft. The aircraft could be outfitted with 2 x Matra rocket pods each holding 18 x 68mm SNEB rockets for a broadened tactical battlefield role. Bomb loads were limited to 5,300lbs of weight collectively across four hardpoints under the wings. The wings' internal hardpoints were additionally plumbed for the carrying of jettisonable fuel tanks for increased patrol ranges. The Sabre was also cleared to carry nuclear-tipped drop ordnance and a pair of AIM-9 Sidewinder short-range air-to-air missiles.

The RAF recognized the Mk 4 as the "Sabre F.4". The West German Luftwaffe was a primary recipient of many ex-RCAF and new-build Canadair Sabres through 75 refurbished Mk 5 fighters and 225 all-new Mk 6 fighters. These served from 1957 into 1964 with the final trainer form not retired until 1983. Other ex-RCAF mounts went to Pakistan (the last retired in 1980) and elsewhere. Operators ultimately included (beyond those already mentioned) Bangladesh, Colombia, Greece, Honduras, Italy, South Africa, Turkey, and Yugoslavia.

Total CL-13 production was 1,815 fighters. The Canadian fighter requirement then fell to the Lockheed F-104 "Starfighter" line which was operated by the RCAF as the "CF-104". Some two-hundred were - again - built locally and under-license by Canadair.©MilitaryFactory.com
Note: The above text is EXCLUSIVE to the site www.MilitaryFactory.com. It is the product of many hours of research and work made possible with the help of contributors, veterans, insiders, and topic specialists. If you happen upon this text anywhere else on the internet or in print, please let us know at MilitaryFactory AT gmail DOT com so that we may take appropriate action against the offender / offending site and continue to protect this original work.
Advertisements

(Showcased performance specifications pertain to the Canadair CL-13 Sabre Mk 6 production variant. Performance specifications showcased above are subject to environmental factors as well as aircraft configuration. Estimates are made when Real Data not available. Compare this aircraft entry against any other in our database or View aircraft by powerplant type)
STANDARD:
6 x 12.7mm Browning M3 heavy machine guns in nose.

Up to 5,300lb of conventional drop ordnance across four hardpoints.

General Assessment
Firepower
Performance
Survivability
Versatility
Impact
Values are derrived from a variety of categories related to the design, overall function, and historical influence of this aircraft in aviation history.
Overall Rating
The overall rating takes into account over 60 individual factors related to this aircraft entry.
40
Rating is out of a possible 100 points.
Relative Maximum Speed
Hi: 750mph
Lo: 375mph
This entry's maximum listed speed (710mph). 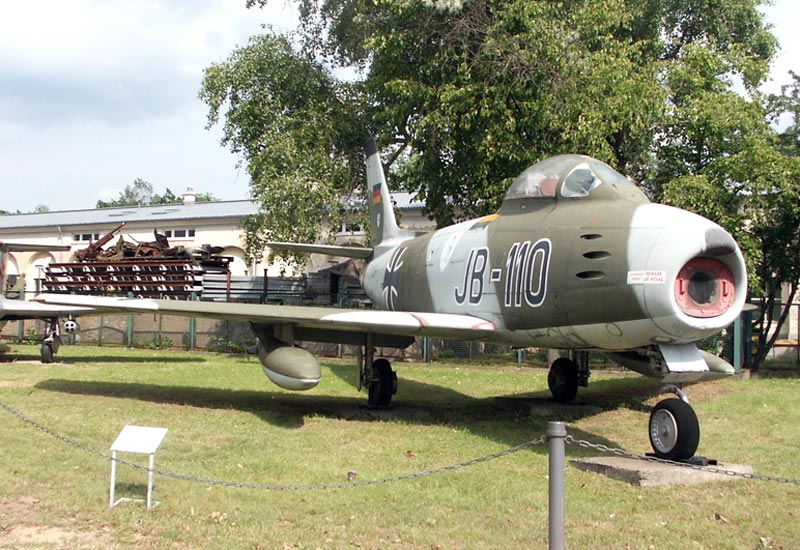