The LFG Roland C.II was a dedicated two-seat reconnaissance platform of the German Empire during World War 1. 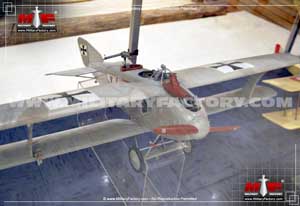 The LFG Roland C.II was a rather advanced biplane fighter design of World War 1 (1914-1918) serving with the forces of the German Empire. It incorporated such forward-thinking features as drag and weight-reducing "I" struts, a lowered upper wing assembly, an aerodynamically-refined tubular fuselage, and construction that yielded a lighter-yet-stronger end-product. While reportedly something of a handful at the controls, the series was a sound performer when introduced during 1916 - its speed proving a vital asset. The deep fuselage of the aircraft earned her the nickname of "Whale".

Since the summer of 1914, the "World War" in Europe had bogged down to static lines of trenches dotting the country sides of France and Belgium by the end of the year. Most observers felt that the conflict would have been resolved by Christmas until the actual horrors of war set in and continued to count the lives or more young men throughout 1915. Advancements in aerial warfare developed at a quickening pace during this period of history, new model series typically making existing ones instantly obsolete. Aircraft were now armed with machine guns and could engage aerial- and ground-based threats at will while others were slated to carry drop ordnance. The breaking of the stalemate was the imperative of the day and technology usually found all-new ways to kill a man - indeed the war introduced the "tank" into military service as well.

Aircraft became faster, high-flying implements as the war progressed. Fighters carried one pilot into battle, initially as "lone wolves" until the concept of squadrons was an established component of military aviation. Fighter-like "scouts", initially unarmed", were now equally outfitted with machine gun support and typically carried two crew in tandem. The second crewman offered another important set of eyes and could engage any inbound aircraft coming from the rear. Along with Britain and France, the German Empire was at the leading edge of fighter development and one of its many contributors to its aviation cause became Luft-Fahrzeug-Gesellschaft GmbH (LFG) and one of their products was the LFG Roland C.II reconnaissance biplane. First flight of the type was seen in 1915.

As finalized, the C.II design incorporated a well-streamlined fuselage of monocoque arrangement utilizing thin strips of plywood material for its skinning to produce a lighter, stronger result. The upper and lower wing mainplanes were integrated well into the natural flow of the aircraft to further reduce the drag generated between the two. Another drag-reducing effort was the implementation of the aforementioned "I-struts" at a time when parallel struts were the call of the day., This allowed for far less strut-work to be used and far less cabling to be exposed between the two wing elements. This simplified wing was quite a noticeable departure from fighters of the day, producing one of the cleaner biplanes of the war. The plywood process involved in skinning the aircraft did require much time and effort - restricting the available numbers of the aircraft for the German Air Service.

With the upper wing assembly now lowered onto the top of the forward fuselage, the pilot's position ahead of the observer was largely unobstructed when looking forward and above. The wings did, however, have the natural detrimental effect of blocking views downward and to the sides. The observer, sitting at near-center in the fuselage, was given a better vantage point but his view forward was also blocked by the biplane wings and his view rearward held the tail. The tail unit featured a sole vertical tail fin and elongated horizontal planes. The undercarriage was typical of the time - fixed and wheeled - which allowed for rough-field operations from make-shift bases. The engine at front drove a two-bladed wooden propeller assembly. The deep-look fuselage provided the C.II with a very portly shape - hence its well-earned "Whale" nickname.©MilitaryFactory.com
Advertisements

Typical armament of the series became a sole 7.92mm Spandau machine gun in a fixed, forward-firing position over the nose and controlled by the pilot. This required use of "interrupter" gear to synchronized the machine gun's rate-of-fire to that of the spinning propeller blade so as to not shoot off a blade in action. The Germans were the first to perfect such hardware and it was immediately followed by an Allied version of the same concept. A 7.92mm Parabellum machine gun was fitted on a ring system at the rear cockpit for the observer/rear gunner. When called to the bombing role, the C.II was cleared for up to 4 x 28lb drop bombs held externally underneath the aircraft.

Introduced in early 1916, the C.II was pressed into service alongside many German aircraft types - those obsolete, some modern, and others of all-new designs mixed into the German Air Service in an attempt to gain the upper hand against the Allied offensives. Control of the skies shifted multiple times during the war - such was the impression of technology pressed upon the war, a single development could render an enter class of aircraft obsolete within weeks of introduction.

Pilots judged the performance of their new C.IIs as strong though they held some reserve about the handling aspects of the aircraft . The wings were a major sticking point as they rendered visibility quite limited from both seating positions, particularly for the pilot when attempting to view the oncoming terrain ahead and below his aircraft. However, the C.II was a naturally fast aeroplane and could simply outrun most aerial threats of the day while ground-based fire had to struggle to train in on the fast aircraft. If an Allied warplane attempted an attack on the C.II series aircraft, it was suggested that it attack the aircraft from above if possible - under the element of surprise. The only other vulnerable attack angle was from underneath though this was a tricky-to-achieve affair. During the war, the C.II undertook various reconnaissance-minded sorties and also managed light bombing and fighter escort missions as called. Within time, the C.II line suffered what other World War 1 aircraft suffered to have it removed from frontline service - it was simply superseded by more capable types before the end of the war in 1918.

The German Air Service took on the C.II through the original base reconnaissance two-seated "C.II" form. This mark was powered by a single Mercedes D.III water-cooled inline engine of 160 horsepower. Performance figures included a maximum speed of 103 miles per hour, a service ceiling of 13,125 feet, and a rate-of-climb of approximately 545 feet-per-minute. The inline engine allowed use of a streamlined spinner on the propeller blade unit, keeping the general profile of the C.II very smooth.

In time, engineers exacted some changes to the base design to produce the "C.IIa" mark which introduced stronger wingtip sections and an enlarged vertical tail fin for better control. The "C.III" was an evolved version of the line fitting a Benz Bz.IV 6-cylinder, liquid-cooled inline engine of 200 horsepower with revised, two-bay wings.©MilitaryFactory.com
Note: The above text is EXCLUSIVE to the site www.MilitaryFactory.com. It is the product of many hours of research and work made possible with the help of contributors, veterans, insiders, and topic specialists. If you happen upon this text anywhere else on the internet or in print, please let us know at MilitaryFactory AT gmail DOT com so that we may take appropriate action against the offender / offending site and continue to protect this original work.
Advertisements

(Showcased performance specifications pertain to the LFG Roland C.II production variant. Performance specifications showcased above are subject to environmental factors as well as aircraft configuration. Estimates are made when Real Data not available. Compare this aircraft entry against any other in our database or View aircraft by powerplant type)
STANDARD:
1 x 7.92mm Spandau machine gun in fixed, forward-firing position over forward fuselage.
1 x 7.92mm Parabellum machine gun on ring mounting in rear cockpit.

OPTIONAL:
Up to 115lb of externally-held conventional drop bombs. 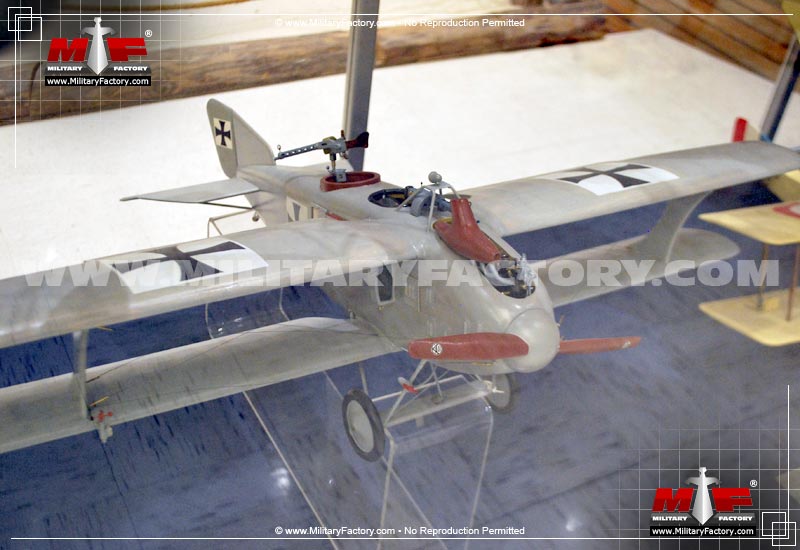 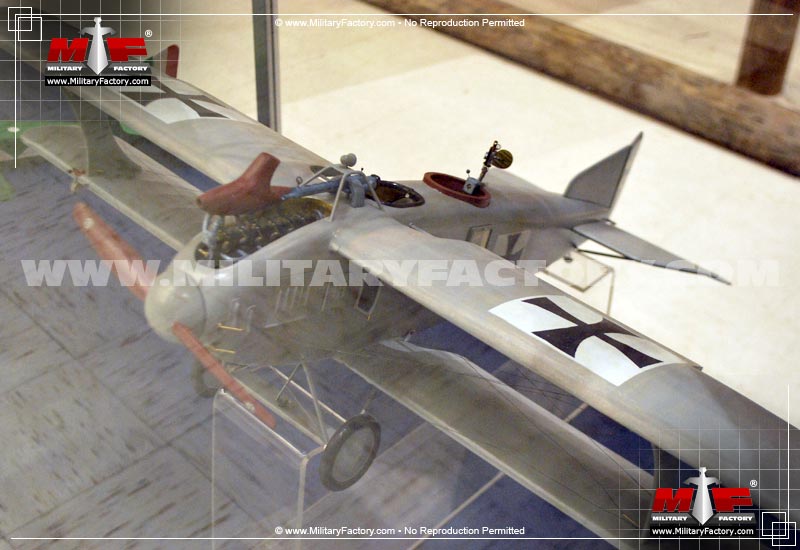 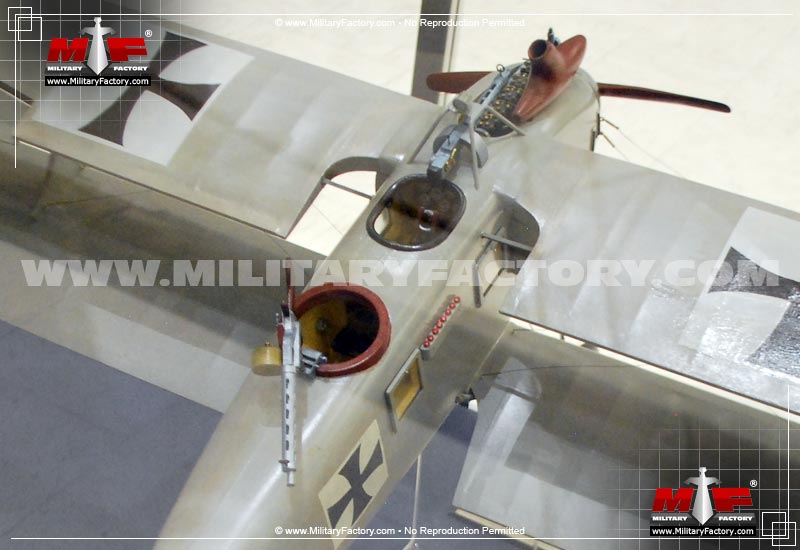 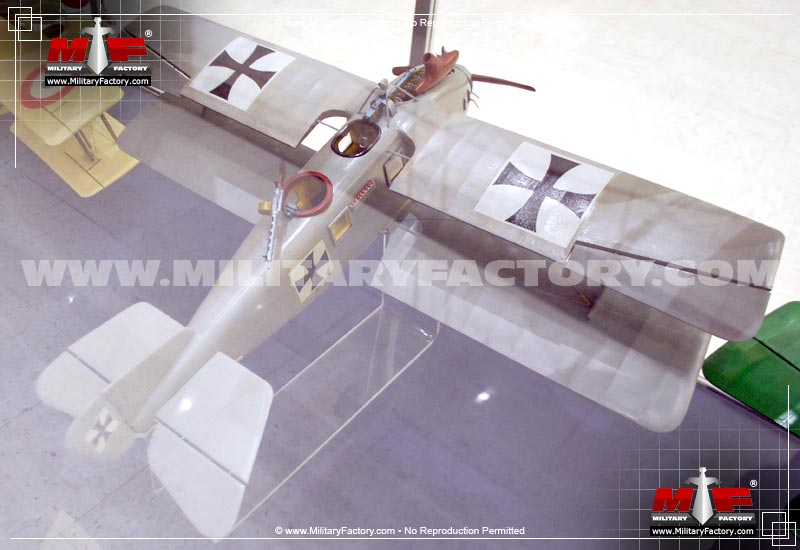