The Imperial Japanese Army interpretation of the German Messerschmitt Me 262 plans was to become the Nakajima Ki-201 jet fighter.

Authored By: Staff Writer | Last Edited: 05/26/2016 | Content ©www.MilitaryFactory.com | The following text is exclusive to this site. 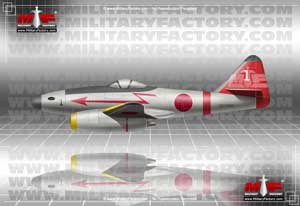 The Nakajima concern of the Imperial Japanese nation of World War 2 was already charged with bringing the German Messerschmitt Me 262 to the Imperial Japanese Navy (IJN). However, some of the required plans were lost with the interception of the German U-boat carrying the information of the aircraft to the Japanese mainland on May 16th, 1945. Japanese engineers made due from the plans in their possession, available photography, and the memories of its engineers originally dispatched to Berlin during a 1944 visit. The end result became the Nakajima "Kikka" which broadly resembled the Me 262 but proved dimensionally smaller with reduced performance specifications. Only one ever flew with a second incomplete airframe taken on by the Allies at the end of the war.

Similarly, the Imperial Japanese Army (IJA) was interested in a jet-powered interceptor and the Me 262 seemed to fit the bill. The official IJA requirement came down in January of 1945 for a fighter intended to best the best of the piston-driven offerings of the Allies. It was further intended that the aircraft was to enter testing by December of that year with official introduction in early 1946. The designation of Ki-201 "Karyu" was applied to the new fighter.

The Allied gains in the Pacific Theater were soon enough to bring the Japanese mainland under direct bombardment of Allied warplanes. The once mighty Japanese Navy was reduced to a shell of its former self and the ultimate defense of Tokyo was no being planned. Additionally, the Japanese lost its ally in German when it surrendered in May of 1945, leaving its engineers in the lurch, forced to piecemeal a design with the form and function of the Me 262.

Engineers selected the Ishikawajima Ne-230 series turbojet engine to power the Ki-201. The aircraft would largely mimic the lines of the Me 262, moreso than the Kikka offering, and include the engines in underslung nacelles along straight wing appendages. The nose assembly would be similar cannon armament - 2 x 30mm Ho-155 and 2 x 20mm Ho-5 - to its German counterpart (4 x 30mm MK 108 cannons) and seat a single pilot under a largely unobstructed canopy at center. The fuselage was stout and streamlined, very shark-like, as in the Me 262 and the triangular vertical tail fun was carried over as was the tricycle undercarriage.

Performance specifications were all estimated - a maximum speed of 507 miles per hour, a range out to 610 miles and a service ceiling of 39,400 feet with a 2,540 feet per minute rate of climb. The Ki-201 would be an interceptor first, fighter second, and fighter-bomber third. The Boeing B-29 Superfortress was the new threat and fast responding, high-flying interceptor types were the call of the day.

Interestingly, the aircraft was also set to carry the TaKi-15 series air intercept radar which was used to direct the aircraft by ground-based communication to a target area. This proved a popular navigation process in the ensuing Cold War years with the next generation of jet-powered fighters and broadened the tactical value of the Ki-201 some. For the fighter-bomber role, the Ki-201 was to carry up to 1,765lb of externally-held stores.

Despite the promising design, the Japanese surrendered on August 15th to officially end World War 2. Along with the surrender came the cancellation of various in-development projects including the Ki-201 jet fighter. Work was only in its extremely infant stage by this point and no prototypes were realized. The design was barely half-way through its finalization stage before the surrender, leaving its capabilities and impact on the war to the imagination.©MilitaryFactory.com
Note: The above text is EXCLUSIVE to the site www.MilitaryFactory.com. It is the product of many hours of research and work made possible with the help of contributors, veterans, insiders, and topic specialists. If you happen upon this text anywhere else on the internet or in print, please let us know at MilitaryFactory AT gmail DOT com so that we may take appropriate action against the offender / offending site and continue to protect this original work.
Advertisements

(Showcased performance specifications pertain to the base Nakajima Ki-201 Karyu production variant. Performance specifications showcased above are subject to environmental factors as well as aircraft configuration. Estimates are made when Real Data not available. Compare this aircraft entry against any other in our database or View aircraft by powerplant type)
PROPOSED STANDARD:
2 x 30mm Ho-155 cannons in nose
2 x 20mm Ho-5 cannons in nose

PROPOSED OPTIONAL:
Up to 1,765lbs of external stores. 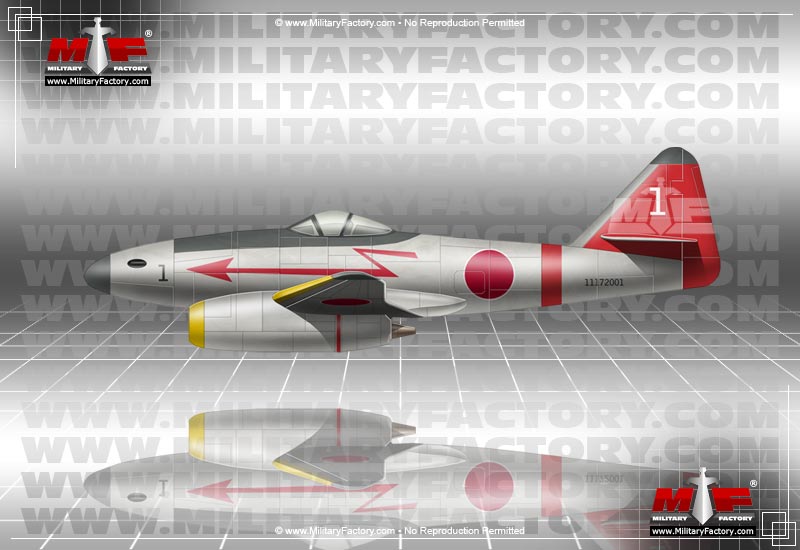