The North American FJ-4 Fury was the final evolution of the Fury fighter line that began with the straight-winged FJ-1 Fury of 1947.

Authored By: Staff Writer | Last Edited: 06/10/2019 | Content ©www.MilitaryFactory.com | The following text is exclusive to this site. 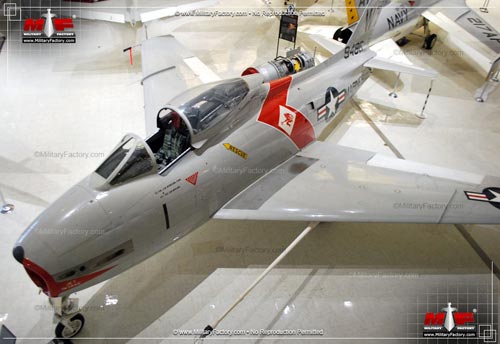 The United States Navy learned much in its early years of operating jet-powered fighters from its decks. The types replaced the proven, now though dated, propeller-driven mounts used to claim the victory in World War 2 (1939-1945). These aircraft retained some of their usefulness in the upcoming Korean War (1950-1953) but were more or less supplanted with the arrival of the jet age. Early-form jet fighters utilized a basic, straight-wing design and housed early-generation turbojets of limited performance and reliability. Swept-wing fighters eventually took this mantle and paved the way for an all-new crop of thoroughbreds which ended up being adopted by the United States Air Force (USAF), United States Navy (USN), and United States Marine Corps (USMC).

The classic American swept-wing fighter of the period was the North American F-86 Sabre which was developed to counter the new Soviet Mikoyan-Gurevich MiG-15 swept-wing fighter line making their combat appearance over Korea. North American worked with the USN to develop a similar carrier-based version of their Sabre which became the FJ-2 "Fury", a much-improved version of the straight-winged FJ-1 Fury of 1947. However, the FJ-2 was not the long-term solution for the USN and additional work led to the evolved FJ-3 model series which switched to the more powerful Wright J65 series engine - a licensed copy of the British Armstrong Siddeley Sapphire turbojet. While only 200 of the FJ-2 Fury models were taken on (and subsequently passed on to the USMC from USN stocks), 538 of the FJ-3 mark arrived and an additional 194 missile-supporting FJ-3M models followed. From all of this work came the culmination of the Fury line - the FJ-4 - which kept the Fury name, the FJ-2/-3's general form and function, and powerplant of the JF-3. On the whole, however, enough changes were instituted in this mark that it became its own major product for the USN.

The FJ-4 was given an all new wing with folding sections for improved carrier storage. The undercarriage was further addressed with a wider track for better ground running and the nose leg reworked within the confines of the new wing design. Internal space in the wings was also set aside for additional fuel stores to help increase the thirsty jet's operational range. More fuel stores came from implementation of a slightly raised dorsal spine which deepened the fuselage. The tail surfaces were slimmed for less drag while retaining the needed agility helpful to any fighter breed. To help lighten the new aircraft's load (and help increase performance some), ammunition stocks for its 4 x 20mm side fuselage cannons were reduced down to 576 rounds from the 648 rounds seen in the FJ-3 model. Also some armoring was deleted through protection still included cockpit armor at the pilot's position, a bullet resistant forward windscreen, and self-sealing fuel tanks.

Outfitted with the Wright J65-W-4 series turbojet engine of 7,700lbs thrust, a pair of XFJ-4 prototypes were completed to the above standard. First flight was recorded on October 28th, 1954, well after the Korean War had concluded in 1953 and then followed a sole YFJ-4 which was set aside for developmental work by North American. This led to the first production-quality FJ-4 Furys being delivered for USN service and carrying the Wright J65-W-16A turbojet engine (7,700lbs thrust). 150 of the type were produced for the single seat fighter-bomber role with deliveries commencing in February of 1955.©MilitaryFactory.com
Advertisements

The base fighter-bomber was then followed by 222 dedicated ground-attack, Close-Air Support (CAS) models in the FJ-4B mold. These included dive brakes for quick slowdowns, reinforced undercarriages for the added weight caused by the implementation of two additional underwing hardpoints (bringing the total to six) for a broaden munitions-carrying battlefield role. The aircraft were cleared for conventional drop ordnance and rocket launching against ground targets and support was granted for carrying AIM-9 Sidewinder short-range air-to-air missiles. One oft-forgotten aspect of the F-4B was its capability of delivering a nuclear bomb - a required quality of most Cold War aircraft - and appropriately outfitted with specialized delivery equipment. Total ordnance loads for the FJ-4 could reach 3,000lbs.

There was only one other major - though limited - variant designation the "Fury 4" family. This was two conversions of FJ-4 fighter-bombers to use a hybrid propulsion design featuring an American Rocketdyne AR-1 rocket engine situated above the regular engine exhaust port for an additional 5,000lbs of thrust. The arrangement was limited to short-dash flying but could prove suitable in the quick-reaction interception role. The USN wanted six FJ-4s converted in this manner for testing though only two were ultimately realized in the end.

Following the services-wide move to a new aircraft designation system, the FJ-4 became the F-1E. The attack-minded FJ-4B was the AF-1F.

With its J65 engine, the FJ-4 exhibited a maximum speed of 680 miles per hour. Range was augmented with the carrying external drop tanks out to 2,020 miles. A refueling probe under the portside wing also allowed for in-flight refueling measures for longer mission endurance. The aircraft's service ceiling was listed at 46,800 feet while rate-of-climb was 7,660 feet per minute.

Ultimately, the JF-4 Fury model ran through its service career in short order - such was the nature of the early turbojet fighters. The last form was retired during the 1960s and none were exported beyond USN/USMC usage. A total of 374 of the type were built.©MilitaryFactory.com
Note: The above text is EXCLUSIVE to the site www.MilitaryFactory.com. It is the product of many hours of research and work made possible with the help of contributors, veterans, insiders, and topic specialists. If you happen upon this text anywhere else on the internet or in print, please let us know at MilitaryFactory AT gmail DOT com so that we may take appropriate action against the offender / offending site and continue to protect this original work.
Advertisements

United States
(OPERATORS list includes past, present, and future operators when applicable)
✓ Air-to-Air Combat, Fighter
General ability to actively engage other aircraft of similar form and function, typically through guns, missiles, and/or aerial rockets. ✓ Ground Attack (Bombing, Strafing)
Ability to conduct aerial bombing of ground targets by way of (but not limited to) guns, bombs, missiles, rockets, and the like. ✓ Close-Air Support (CAS)
Developed to operate in close proximity to active ground elements by way of a broad array of air-to-ground ordnance and munitions options. ✓ Maritime / Navy
Land-based or shipborne capability for operating over-water in various maritime-related roles while supported by allied naval surface elements.

(Showcased performance specifications pertain to the base North American FJ-4 Fury production variant. Performance specifications showcased above are subject to environmental factors as well as aircraft configuration. Estimates are made when Real Data not available. Compare this aircraft entry against any other in our database or View aircraft by powerplant type)
STANDARD:
4 x 20mm internal automatic cannons in forward fuselage sides. 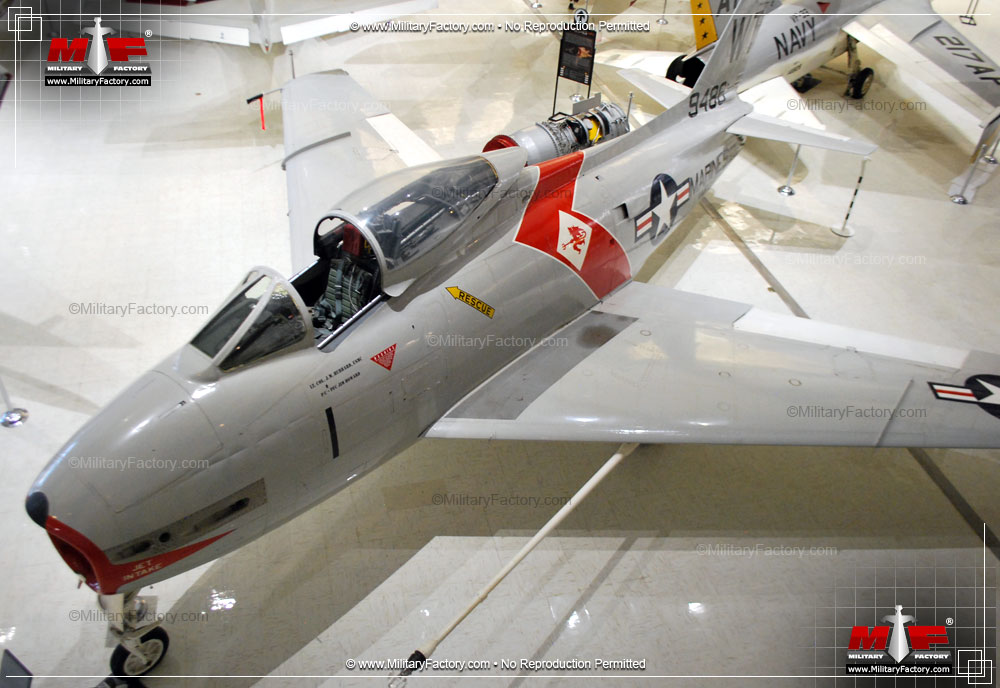 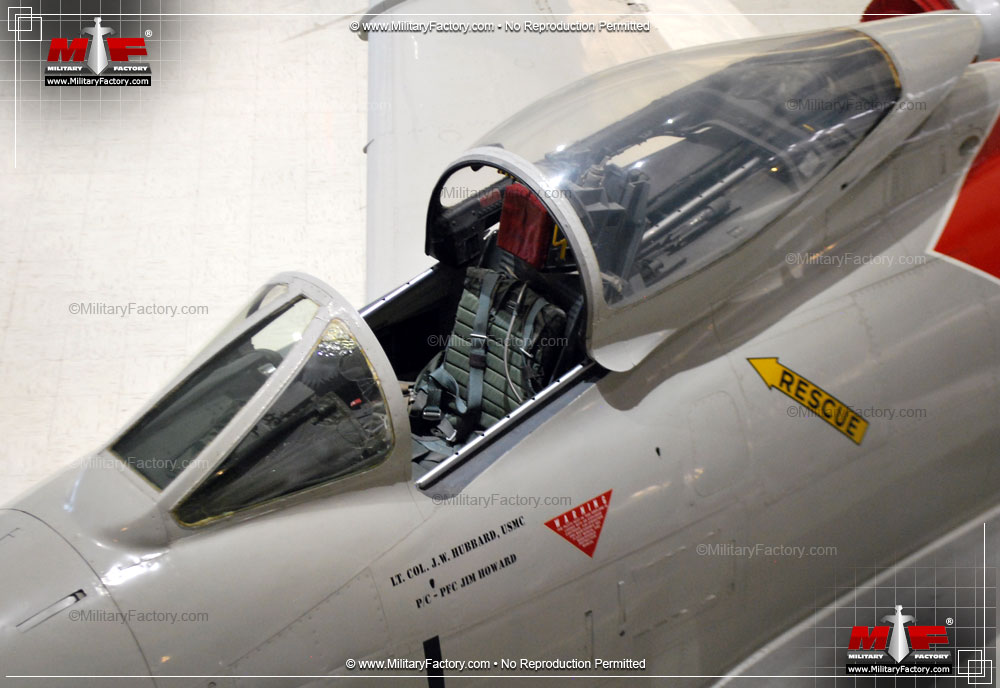 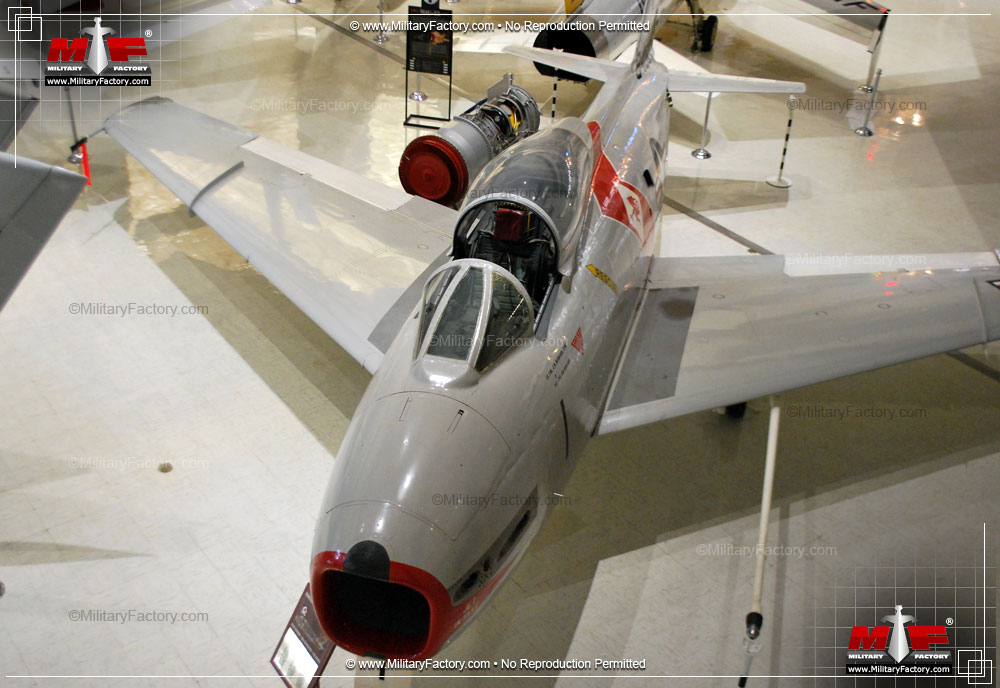 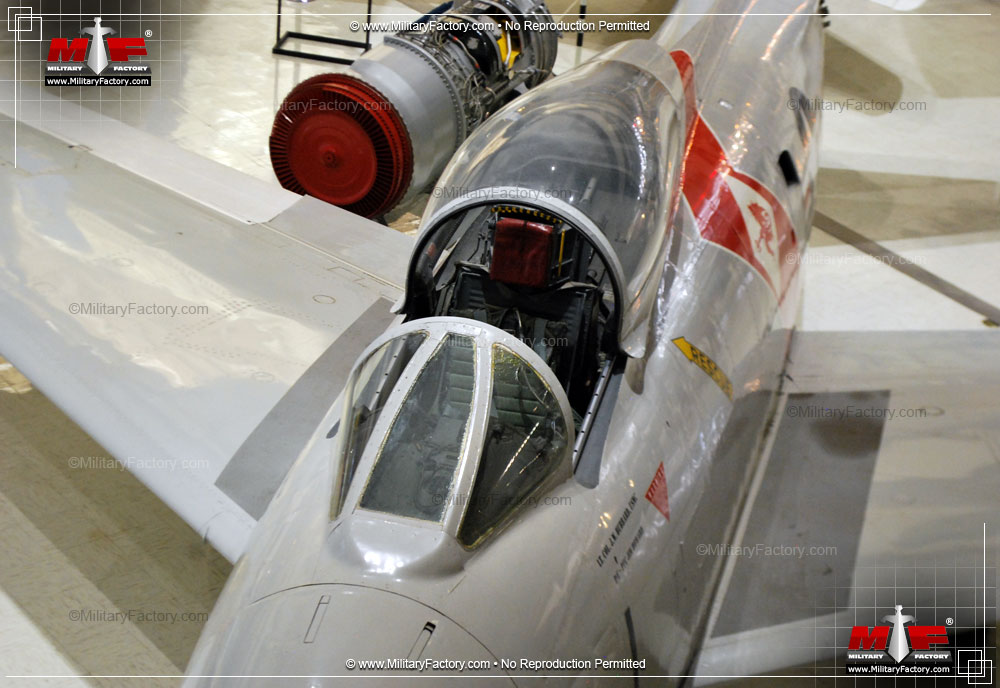 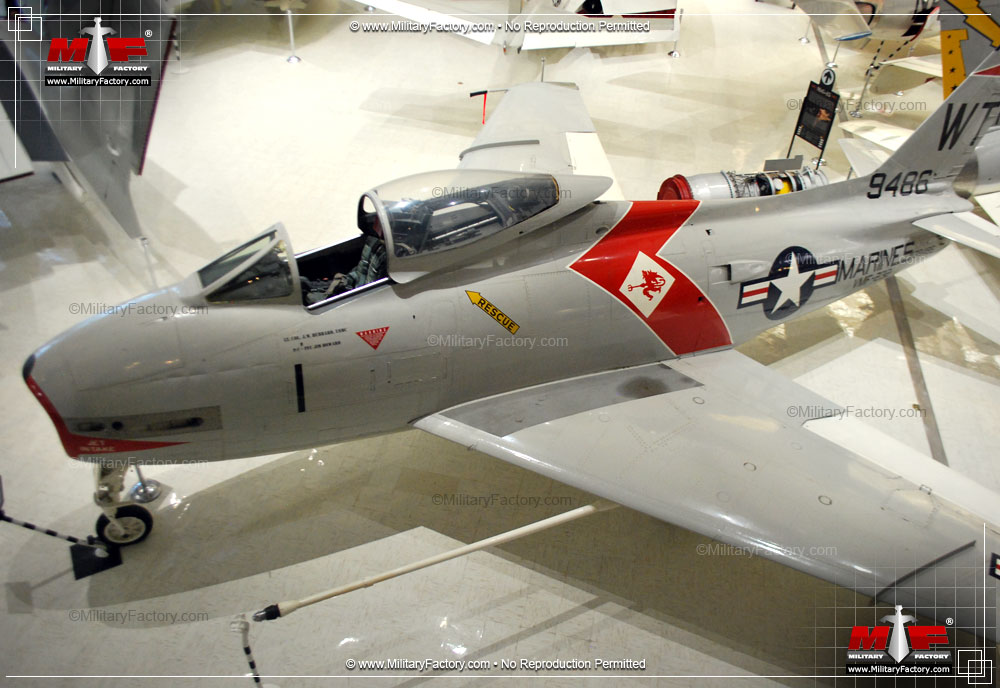 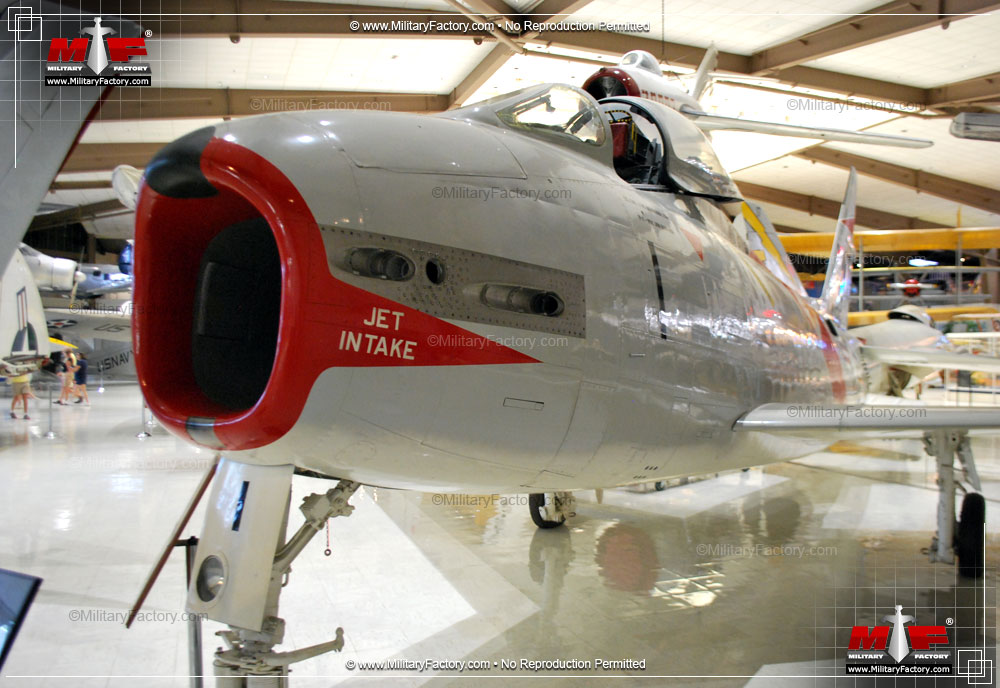 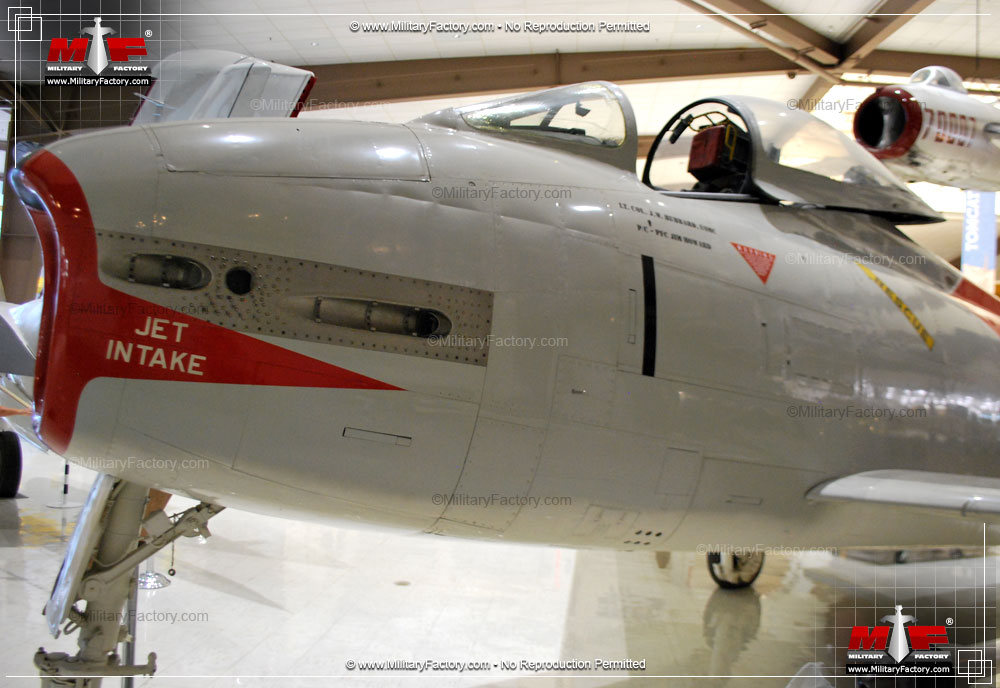 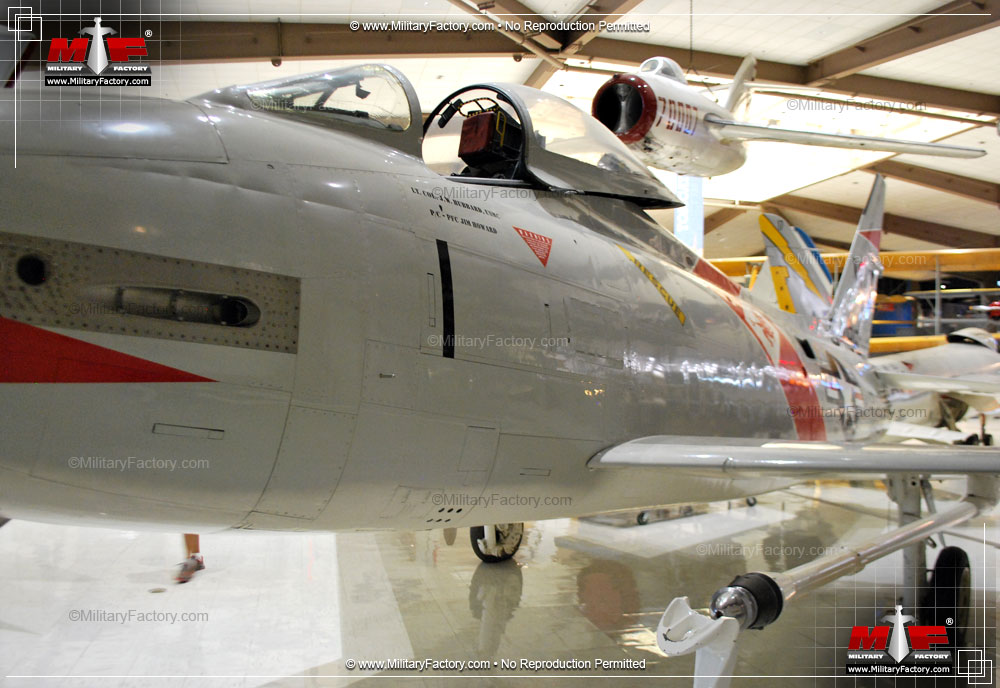 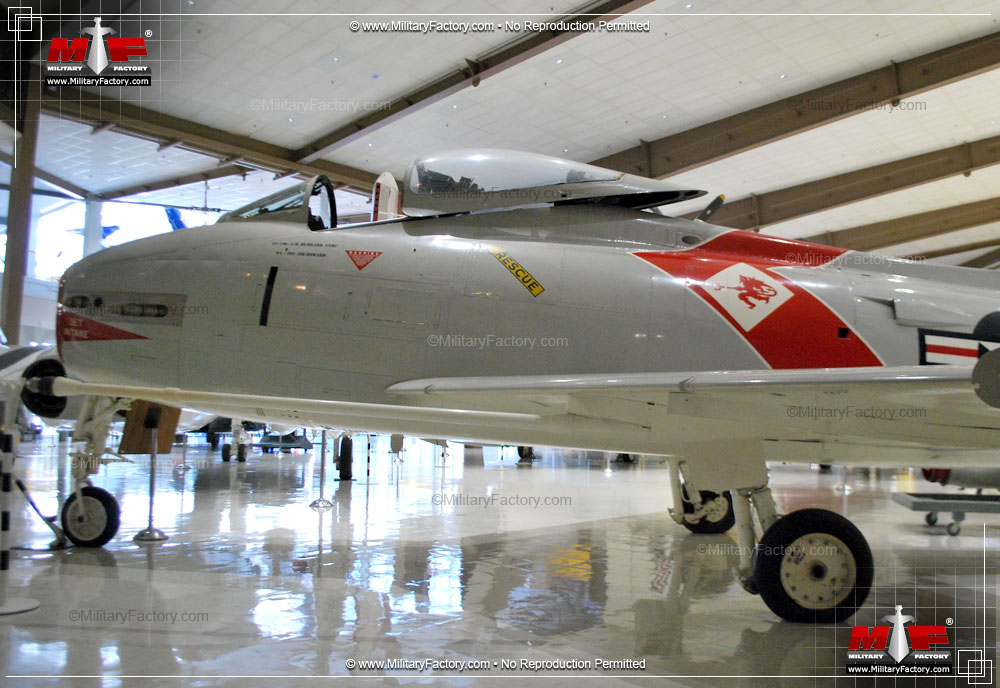 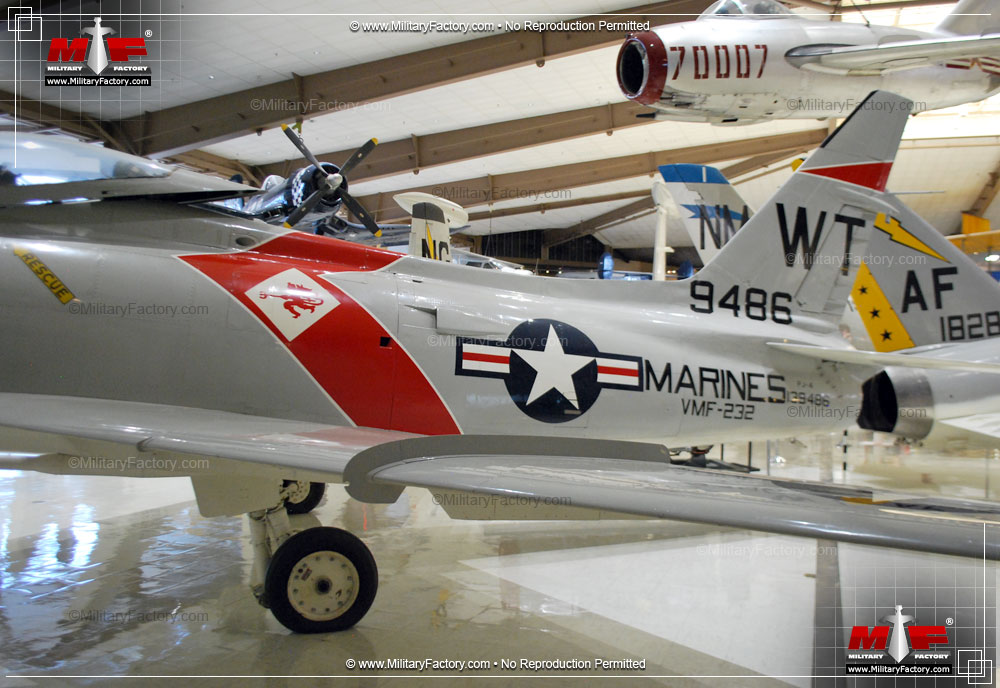 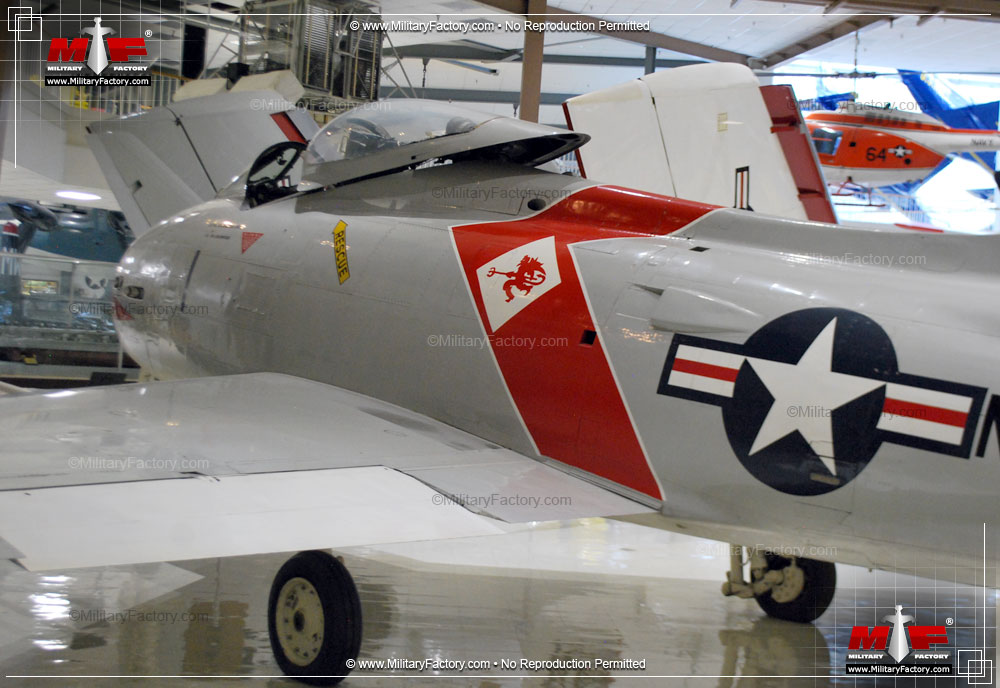 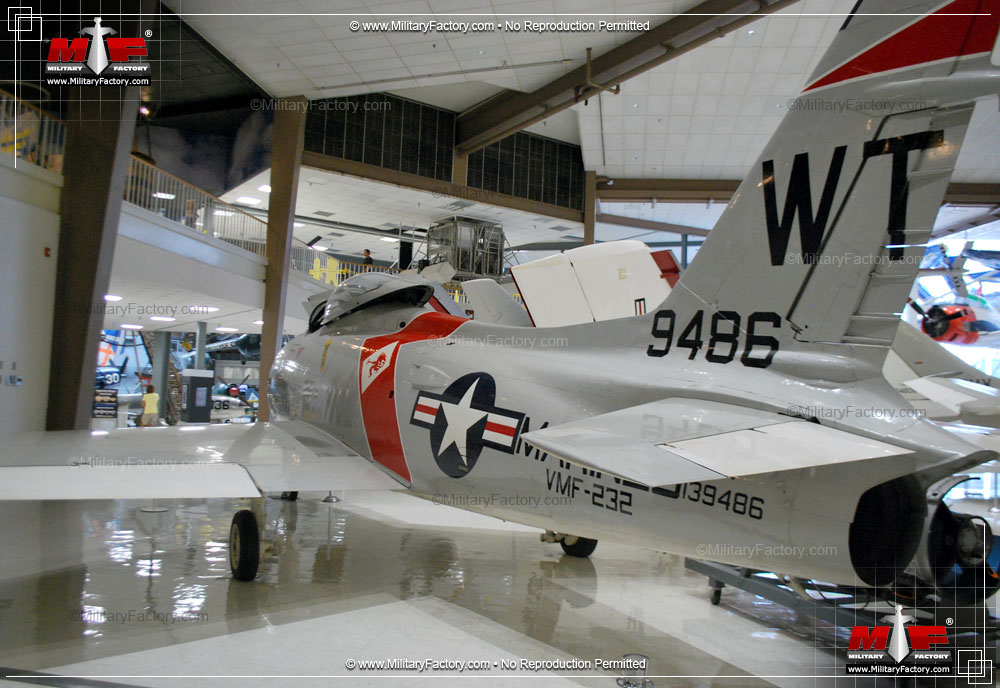 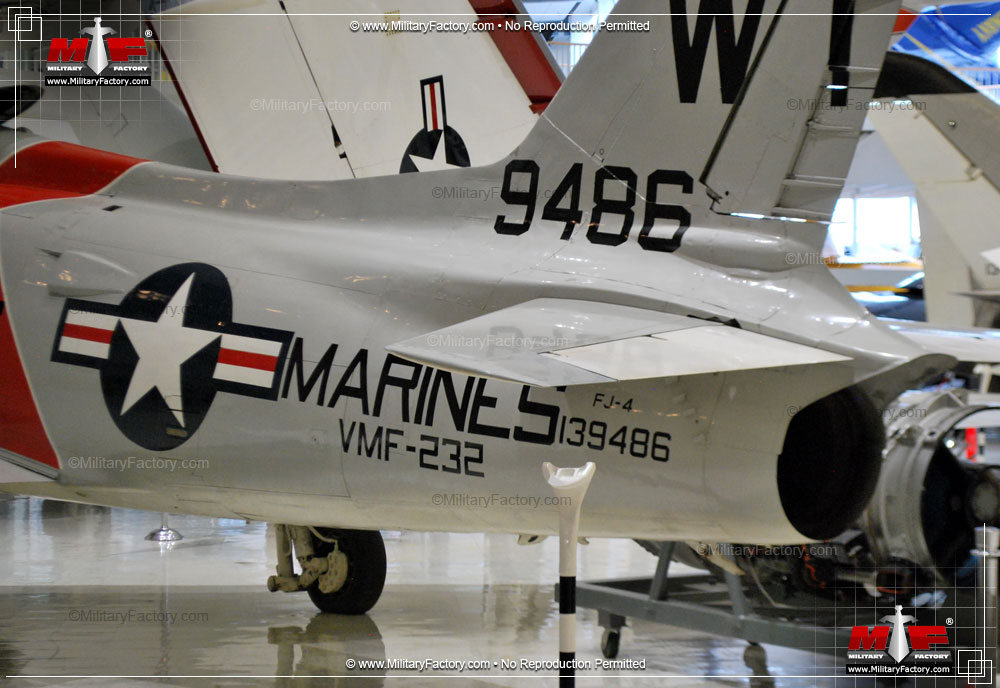 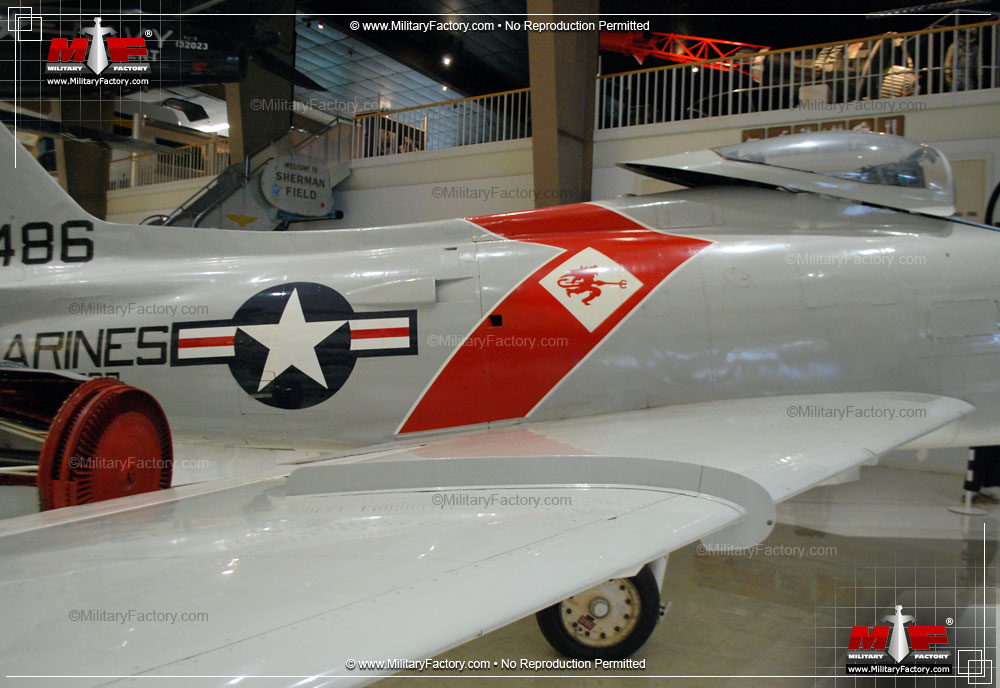 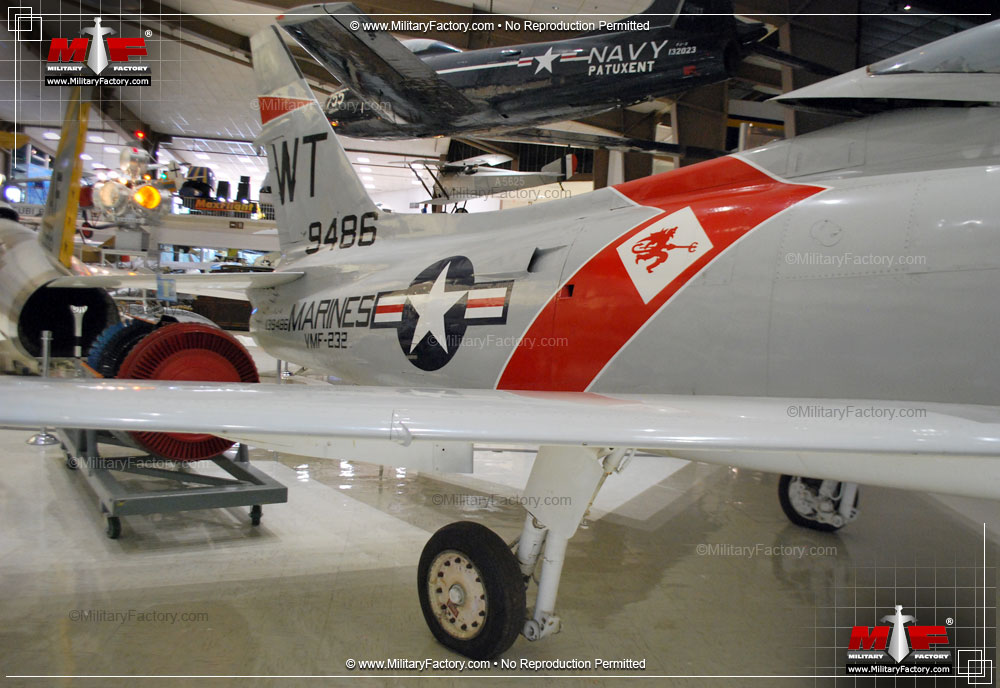