The North American FJ-2 and FJ-3 series of fighters were a swept-back wing version of the original straight-winged FJ-1 Fury of 1947.

Authored By: Staff Writer | Last Edited: 04/03/2018 | Content ©www.MilitaryFactory.com | The following text is exclusive to this site. 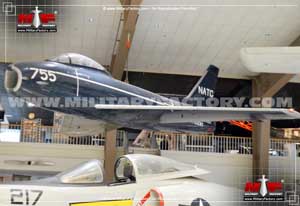 The American jet fighter program evolved considerably following the close of World War 2 in 1945. Original offerings were of the straight-wing design with engines integrated into the fuselage unlike the German Messerschmitt Me 262 which included swept-back wings and underslung engine nacelles. However, the approach changed significantly as technology allowed and the Americans began the focus on swept wings as well as the classic nose intake form, the work ultimately producing the classic North American F-86 "Sabre" fighter of the Korean War years (1950-1953) for the United States Air Force (USAF).

The United States Navy (USN) had already committed somewhat to another North American product - the FJ-1 Fury carrier-based jet-powered fighter. The design continued a straight-winged approach, seated one pilot, and featured the typical nose-mounted intake and applicable system ductwork within the fuselage. The aircraft went on to serve more in the development role than anything else, its design eventually revealing several shortcomings not wanted in a carrier-based fighter aircraft. As such, just 30 airframes were acquired from the original 100-strong order. None saw combat and the line was quickly retired in 1953 after having been introduced in late 1947.

By the time of the Korean War in 1950, American forces were pressed into large-scale combat once more, this time against an aggressive foe flying the all-new, swept-back wing jet-powered fighter in the Mikoyan-Gurevich MiG-15. These aircraft - particularly in the hands of Soviet airmen - offered tremendous performance gains and agility when coming up against the straight-winged jet-powered developments of the USN/USMC. As such, the pressure lay on American engineers to develop a similar product to content with the small nimble enemy fighter.

While the USN held several swept-wing types in the works heading into the war, none were ready for primetime, frontline service and an interim measure was sought. One possible solution lay in adopting the land-based North American F-86 Sabre fighter of the USAF for service on USN carrier decks. The aircraft appeared in their original form during 1949 and could reach speeds nearing 700 miles per hour with their swept-wing designs. Armament was 6 x 0.50 caliber Browning heavy machine guns in the sides of the nose. Rocket and bomb-dropping support was also added for the fighter-bomber role. These qualities made for a good starting point when considering a future frontline USN fighter.

The USN moved quickly on selecting the F-86E for conversion and 300 of the type were originally ordered even before any prototype had officially flown for authorities. A slightly revised model - the XFJ-2B - was displayed with 4 x 20mm cannons replacing the original F-86's six machine guns though, on the whole, it remained largely familiar to the F-86 and no structural changes instituted at this point. First flight was on December 27th, 1951 as the Korean War raged on into 1952.

By the time of the second prototype (three were ultimately built), the aircraft was finally given some carrier-minded functionality including an arrestor hook for deck landings and a lengthened nose landing gear leg for improved take-offs. Trials commenced in August of 1952 and testing lasted into December of that year - ultimately revealing structural issues and the aircraft lacking the desired carrier performance.
Advertisements

The engine of choice became the General Electric J-47-GE-2 which outputted at 6,000lb thrust. This allowed for a maximum speed of 675 miles per hour with a range out to 860 miles, a service ceiling of 46,800 feet and a rate-of-climb of 7,230 feet per minute. Performance numbers were slightly below that as offered on the F-86 but naval fighter aircraft had to deal with design challenges all their own. On the whole, the new aircraft - designated by the USN as FJ-2 while retaining the "Fury" name, followed the same design form as the F-86 in USAF service.

In post-testing, more changes greeted the design as the nosewheel was strengthened and the canopy revised for better vision. The wings were now made to fold along a hinge for improved carrier storage - a feature lacking in the earlier FJ-1 models. The tail unit was revised to incorporate all-moving surfaces for better controlling. The undercarriage track was widened for better ground running on deck.

In practice, the FJ-2 - as with the FJ-1 before it - did not end up as the long-term solution sought by the USN. It was a heavy aircraft lacking the required performance and capabilities for serious carrier work and the F-86 conversion process had not produced the type of fighter envisioned. Delays and resource allocation to the USAF F-86 also promoted a late service date for about five aircraft were available by the end of the Korean War in 1953 - leaving no impact on the war. Production was therefore curtailed and only 200 of the expected 300 airframes were ultimately procured and the USN was quick to pass these on to the USMC to be used as land-based fighters instead. The USN made due with its mixed crop of straight-winged and some other swept-winged jet fighters for the duration of the war. USMC FJ-2 Furys were already out of circulation by 1958.

Participants in the FJ-2 program were not blind to the limitations inherent in the original product for work on an improved form - the FJ-3 - was already ongoing even as the FJ-2 was picking up steam. It was decided that an altogether different powerplant be used and this based on the successful British Armstrong Siddeley Sapphire turbojet design which appeared (under local license) in America as the Wright J65. Beyond that, the aircraft largely stayed faithful to the FJ-2 before it for simplicity's sake. First flight of a production-quality airframe with the new J65 engine was on July 3rd, 1953 and the USN ordered 389 of the type (back in March of 1952). Deliveries commenced during September of 1954 - though arriving too late for service over Korea.

First-use actions of the FJ-3 proved promising enough though the J65 engine offered up problems all its own. However, overall performance was deemed more than adequate for USN fighter needs aboard its decks and the branch lived with the temperamental engines for the foreseeable future. New wings were eventually adopted from F-86F models into the FJ-3 Furys which expanded maneuverability of the line. Ordnance-carrying capabilities were later added as well which increased tactical value by incorporating a fighter-bomber quality for the aircraft - going far beyond the single-minded fighter approach originally envisioned. This included the addition of four underwing hardpoints, two per wing, and cleared to carry conventional drop ordnance and launch rockets.

The USN returned to North American for another 149 aircraft which ultimately resulted in 538 FJ-3 models being procured. An improved version - the FJ-3M - was later introduced that supported the carrying (and firing) of the AIM-9 Sidewinder short-range air-to-air missile. 194 of this mark were obtained from conversion of existing FJ-3 airframes. An in-flight refueling capability was later included to some of the FJ-3 fighters by way of an underwing probe fitted from 1956 onwards. A few other forms were then modified for use in the air control role for drone and missile work.

The FJ-2 and FJ-3 Fury were never exported and only served under the USN and USMC banners. Due to the large scale 1962 aircraft designation change by the American military, Furies were redesignated to the "F-1" standard and the FJ-3 model became the F-1C, the FJ-3M was the MF-1C, the FJ-3D Regulus missile control model became the DF-1C, and the FJ-3D2 target drone controller was the DF-1D. The line was eventually evolved into the North American "FJ-4" Fury form - an altogether different aircraft despite its general appearance mimicking that of the FJ-2/FJ-3 line. The type appeared in 1954 and was procured in 374 examples for the USN and USMC - it is detailed elsewhere on this site.
Advertisements

United States
(OPERATORS list includes past, present, and future operators when applicable)
✓ Air-to-Air Combat, Fighter
General ability to actively engage other aircraft of similar form and function, typically through guns, missiles, and/or aerial rockets. ✓ Ground Attack (Bombing, Strafing)
Ability to conduct aerial bombing of ground targets by way of (but not limited to) guns, bombs, missiles, rockets, and the like. ✓ Maritime / Navy
Land-based or shipborne capability for operating over-water in various maritime-related roles while supported by allied naval surface elements.

(Showcased performance specifications pertain to the North American FJ-2 Fury production variant. Compare this aircraft entry against any other in our database or View aircraft by powerplant type)
STANDARD:
4 x 20mm cannons in front fuselage sides

OPTIONAL:
Conventional drop bombs and rockets held under the wings. 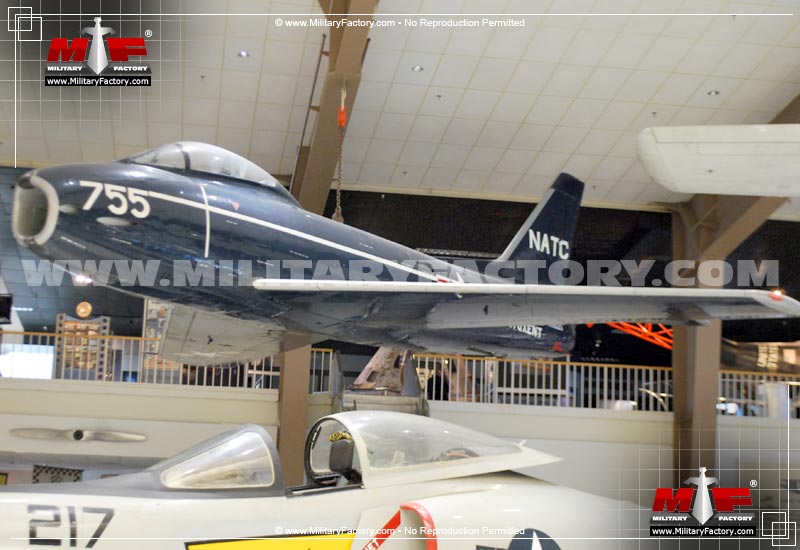 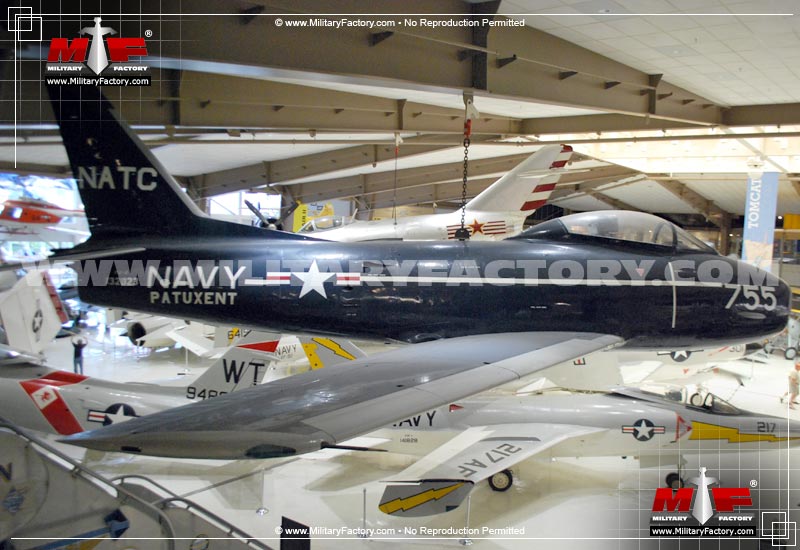 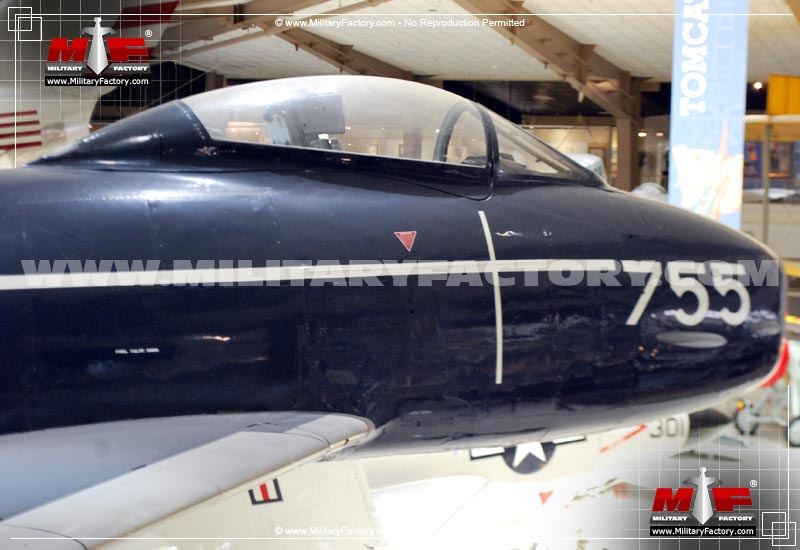 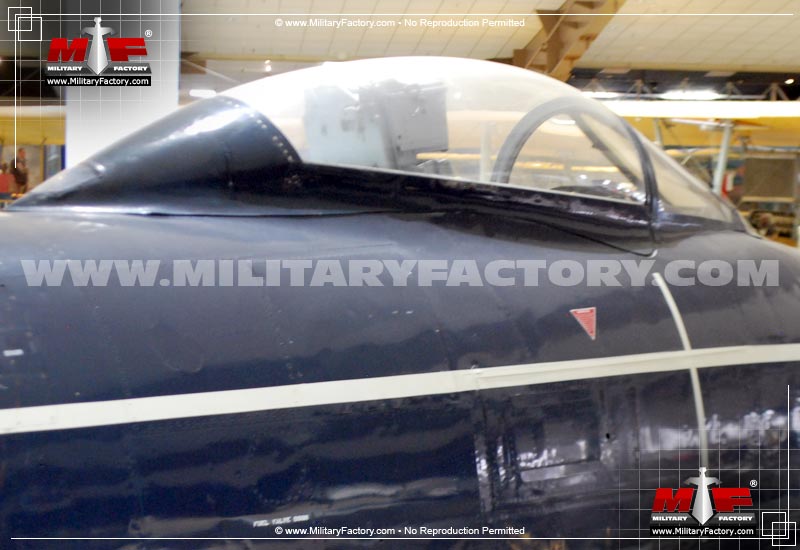 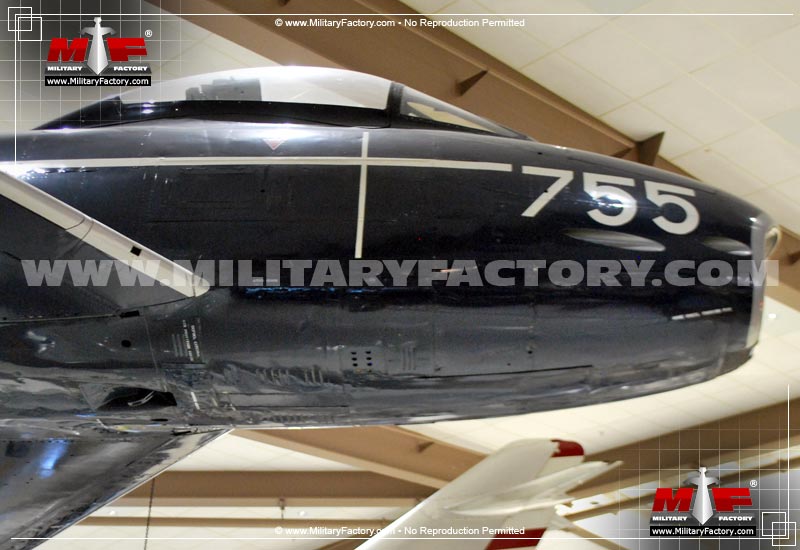 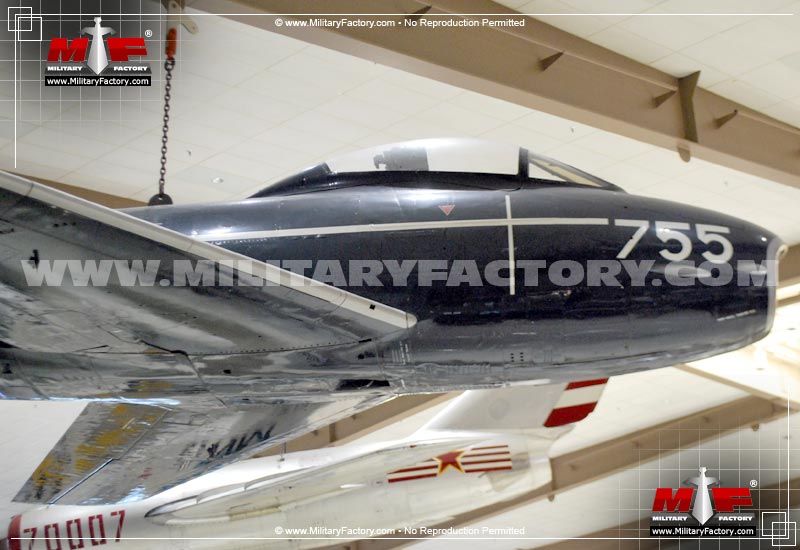 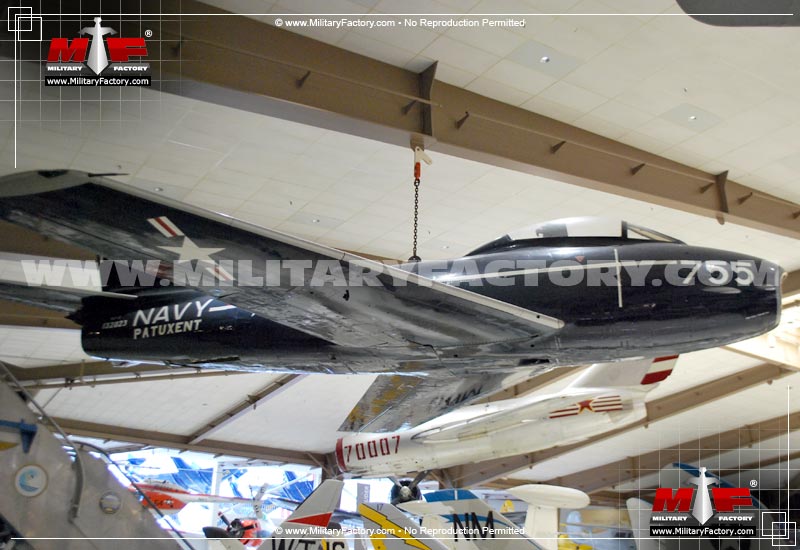 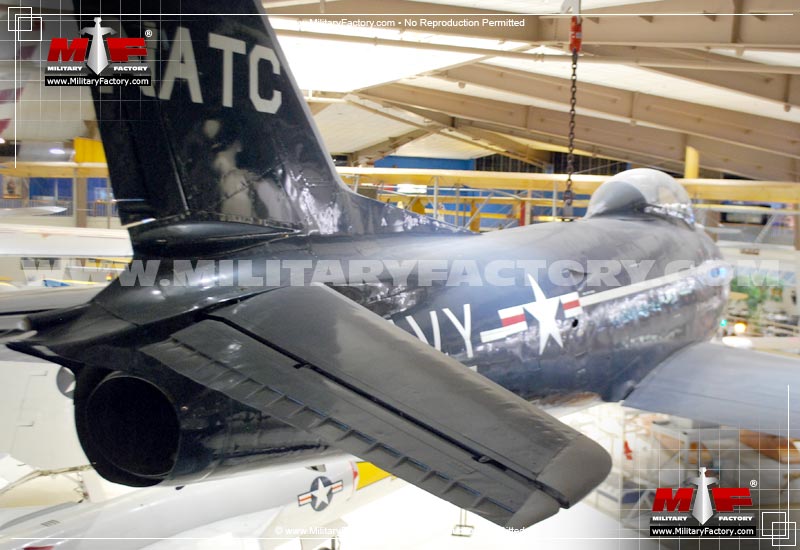 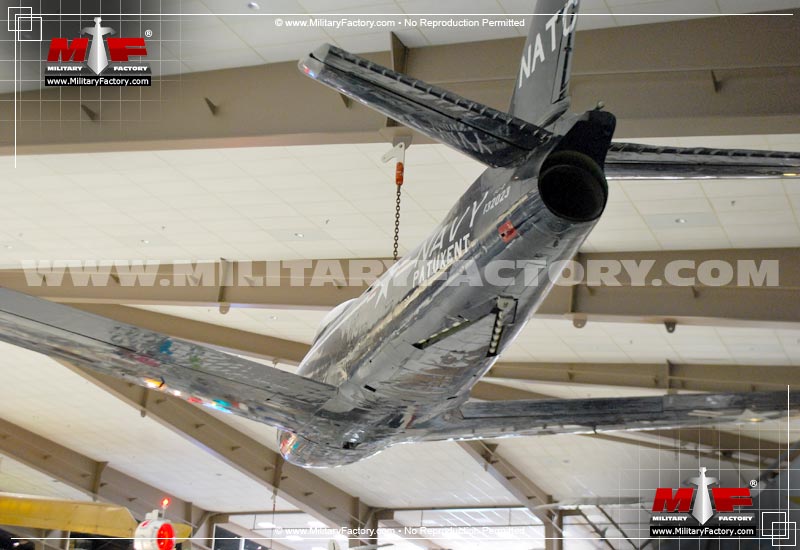 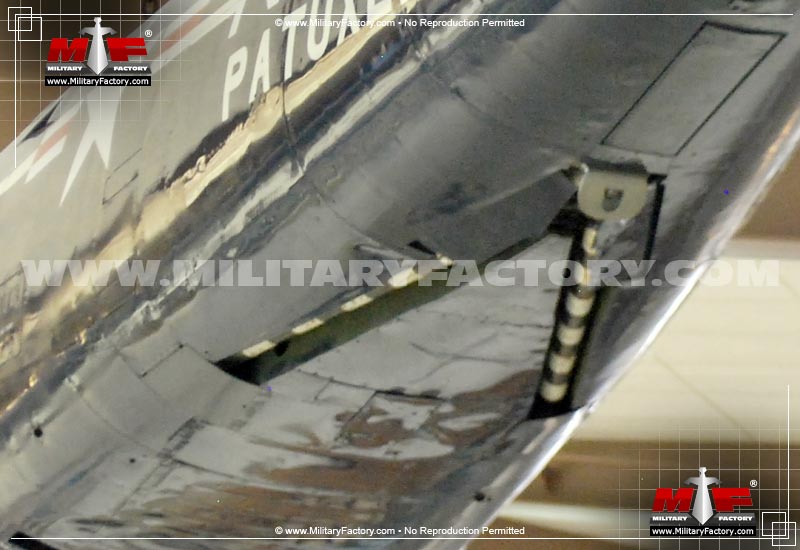 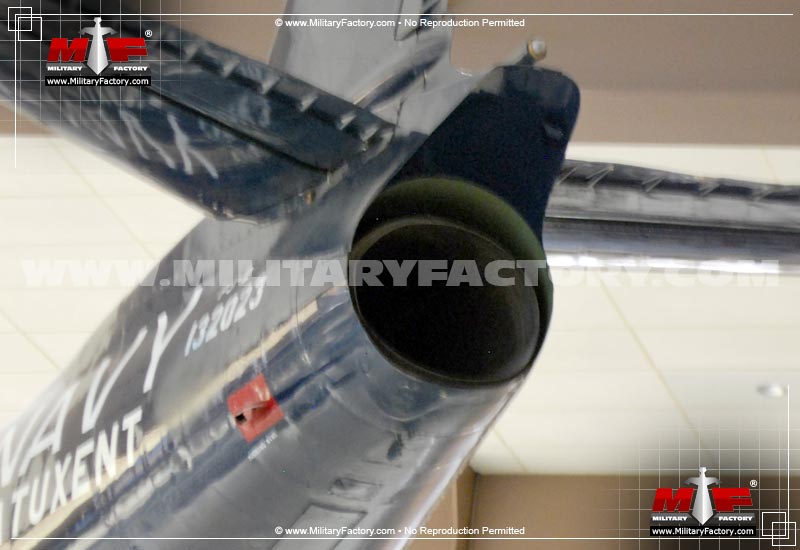 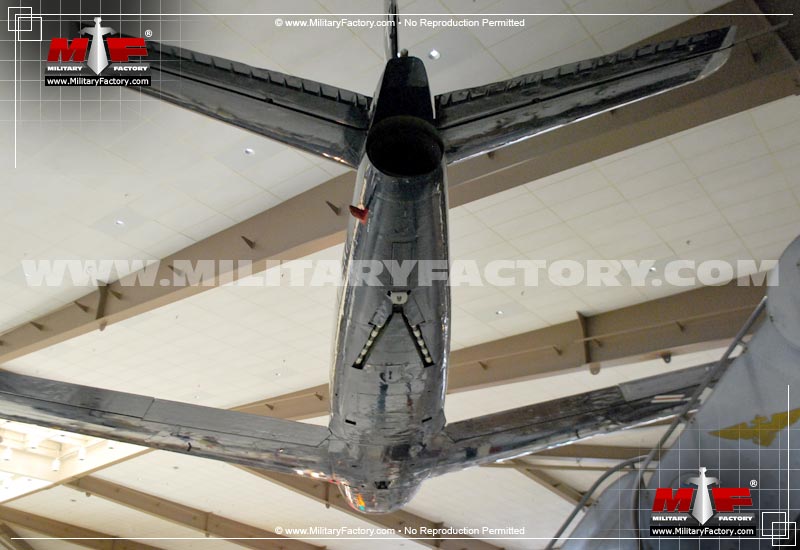 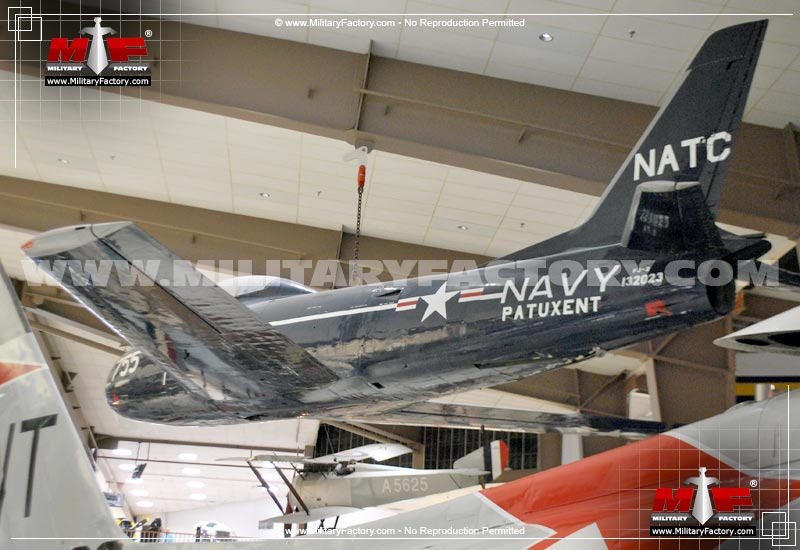 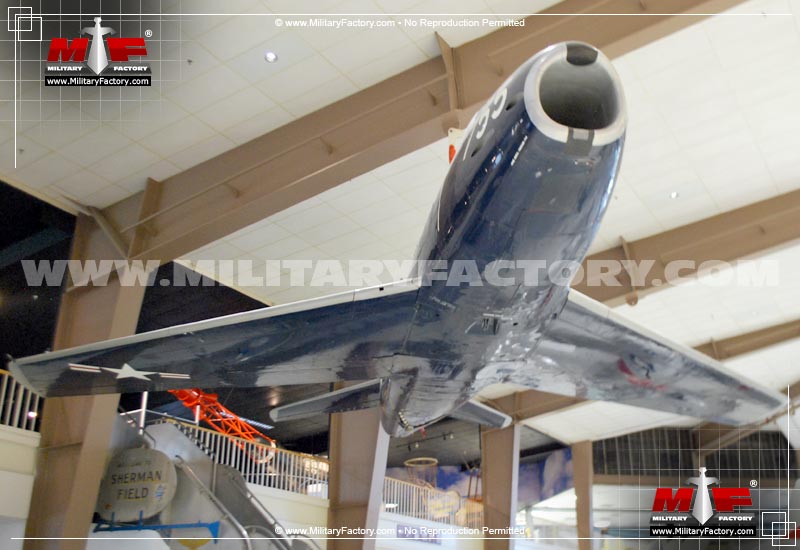